Yamaha is an extraordinary organization. You can’t really call it a company in the most obvious meaning of the term. It is an organization that is involved in some ways in just about everything we do. They have 63 subsidiaries, including Steinberg from Germany, that manufactures a wide range of products.

However, it is their musical involvement that they are most famous for. Since its inception in 1887, music has been at the forefront of what they do. Even their logo is still a trio of interlocking tuning forks. They are a remarkable organization and world leaders in some of their products.

Today though, we are more concerned with the audio aspects as we take you through our Yamaha YAS-207BL Review.

Yet another Yamaha world’s first product… 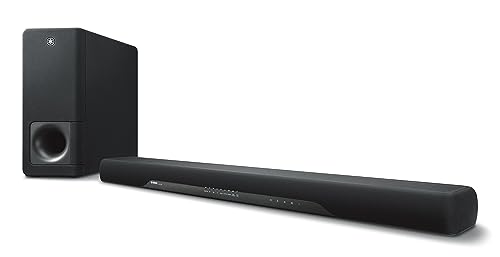 The YAS-207 is just one of the soundbar systems produced by Yamaha to enhance your home audio experience. This particular model is what might be called an entry-level product, so nowhere near the top of their range.

At the time of its introduction, it was the first soundbar that had DTS Virtual:X surround sound. Soundbars have been around a relatively short time. And it took some time for them to develop into their current format. As different manufacturers experimented with the ideas, their design, and even the purpose changed. 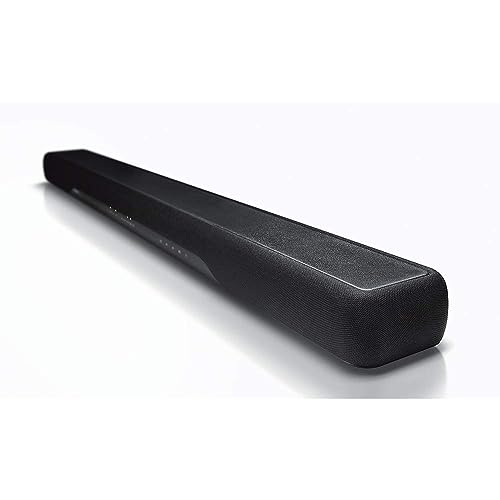 Yamaha’s first effort in 2005 won the best in show award at the Consumer Awards Show. The 207, though, is a different concept. It aims especially for those entering the home audio experience for the first time. It is made to be cost-effective and affordable.

The Yamaha YAS 207BL design is plain and simple and nothing particularly special. In fact, it is by Yamaha standards made quite cheaply. Constructed of plastic, the sides are covered with a fabric material. There are some controls on the front that are touch-sensitive, and the length of the top is also plastic, but with a finish that is supposed to resemble a leather look. 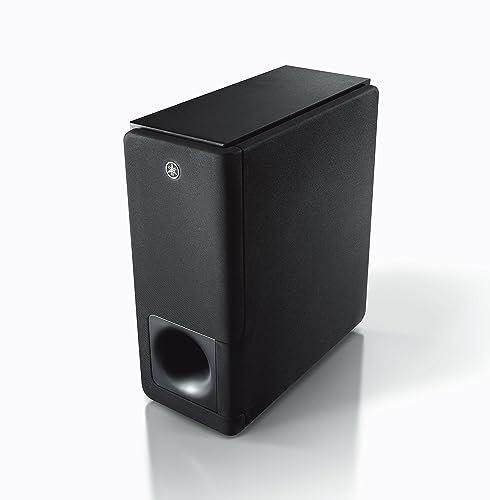 The quality of the build is acceptable, given it is a budget level product. It doesn’t feel particularly vulnerable in the hand. The fabric at each end, which resembles a mesh, though, is a potential problem. It will get dirty; we would think and is open to the risk of being damaged.

Much more so than if the ends were a solid material. It will, though, be ok we think providing it isn’t moved around too much.

Featuring a slim design by necessity, it is understated in its design. However, it is a decent size, so positioning will be important, and is 36.4 inches in width and 2.3 inches high with a depth of 3.8 inches. But it is not particularly heavy at just 6 pounds.

Looking at the leg width of a 55-inch stand for a TV, it looks unlikely it will fit between them. It can be placed in front of the TV on a table or TV stand. It won’t be too high to interfere with the screen. If you have a TV where the screen actually sits on the table as some do, then there may be a problem.

It is fitted with four one and three-quarter inch woofers and dual one-inch tweeters to give you the top end.

As with the soundbar itself, the Subwoofer has a low-profile design. The most prominent part of the design is the inclusion of the bass port on the front. This differs from what some might consider the usual position on the back.

There is some argument about whether the bass port is better at the front or the back. Many sound people these days will say that the front can be better. This is primarily because rear-facing ports are often placed too close to a wall. This will disrupt the intended sound and cause two images to be heard, causing a reflection. 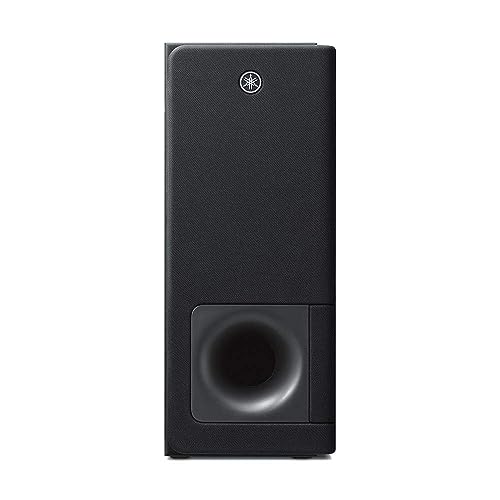 This subwoofer, like the soundbar, has the same mesh-like material on the front and the side panel. As we mentioned, when discussing this for the soundbar, they are at risk of damage. More so than if the material were solid. They might also be unwanted dust collectors.

The front grille being mesh looks like it is removable, but it isn’t. It is, however, quite attractive in its look, which may have been the driving force in the design.

They are a reasonable size. 17.2 inches high, and with a depth of 15.7 inches and width of 7.1 inches, they will take up a bit of space. It is a fairly heavy cabinet though at over 17 pounds in weight. Inside is a massive 6 and a quarter-inch cone woofer.

Yamaha claims 100 watts output for both soundbar and subwoofer. That gives you 200 watts, which is enough to fill any reasonably sized room. More on this later.

On the back, there is just the plug for the power source. The subwoofer certainly won’t win any prizes for the depth of its bass production. It is adequate for a low volume setup. It does, though, have flexible placement opportunities.

It is 4.1 Bluetooth enabled, and so you can stream in music if you wish. The soundbar has a decent feature in that if it has been left idle, it will turn itself off. 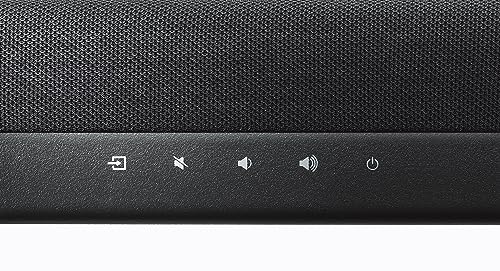 Extras that are included are a remote control unit, and power cables for both soundbar and subwoofer. Optical cables are also included. They also give you a wall-mounting marker template should you wish to wall hang it — a very good idea. Not every company provides such a simple thing. They also include some operational manuals. These are twenty pages long, so there is a bit of a learning curve.

As a sound unit, the soundbar and subwoofer of the Yamaha YAS 207bl work well for an entry-level system

In a system that is very basic, the controls are going to be simple and basic. There is no need or necessity for flamboyance. They’re just the most common inputs for Optical and HDMI and ARC. It also has a 3.5mm jack socket that will take phones and other devices. This is also useful for providing an alternative wired connection instead of Bluetooth.

The setup is simple using either HDMI, optical, or connecting through Analog.

There are touch-sensitive controls on the front of the soundbar. These are very self-explanatory but include the usual basic controls, including volume, mute, and power. There are some LED indicator lights that keep you informed about what inputs are in use, audio formats, etc.

The subwoofer and soundbar are connected wirelessly, so the only cable needed is the power cord. On the back of the subwoofer is a button for pairing for Bluetooth if it is required. 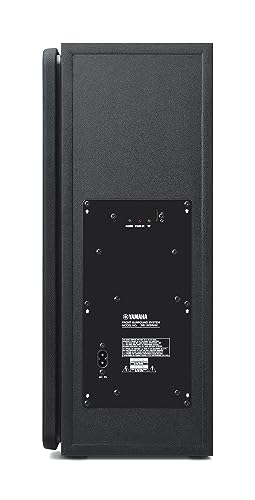 It has a remote control that is rather small but contains some good control features. The volume level of the subwoofer and the soundbar can be controlled separately of each other, or if required, you can mute both or either.

There is also a dimmer control for the LED lighting, and you can switch between stereo or surround sound. The remote will also introduce sound effects. It has two onboard effects, Clear Voice and Bass extension, which are explanatory.

There is an online app that you will get access to. It is quite basic and really just offers similar features to the remote control.

The Yamaha YAS-207BL has a decent sound without setting the world alight. It is an entry-level budget system, after all. The high and mid frequencies are more than acceptable, given the price point. They produce an accurate reproduction of the sound. This results in the dialogue in movies being clear. It also gives clarity to soloing instruments and individual vocals.

The low frequencies, though, are not so good. The bass extension is useful but still does not give the real deep thump that is required with some movies. The bass level is adjustable, but you won’t find that very low-frequency sound. That may be a bit unfair given the price point of this system.

The soundstage again is acceptable. It cannot be called wide and really only operates within the width of the soundbar. You don’t get that surround sound experience of someone walking behind you. Again, you probably cannot expect that at this price point.

We mentioned the power rating earlier. This system can go deceptively loud and has an SPL of 95.8. This makes it ideal for the larger room or even for a room full of people. Don’t push it too far, though, as it will struggle a little, especially with the lower frequencies.

Good sound for the price…

Despite not having what could be designated as a center speaker, it still performs well. Using the right and left speaker areas of the soundbar, it creates the center sound. The Yamaha YAS 207BL has a good sound for an entry-level system.

The Yamaha YAS-207 is a soundbar with a woofer that will give you a good sound for both music and movies. To be fair, it will struggle a little if you use it for gaming due to the absence of very low frequencies. But if you are buying it for movies and music, it offers good value for money. It doesn’t support Dolby ATMOS Cinema Sound, though, so the sound on some movies may not be as you might have hoped.

If you want a soundbar that will give you a very good sound experience, then this might be it. If maybe you are not that worried about surround sound, then this is a great option.

For balance, we ought to identify something we don’t like. In this case, it is the materials used in parts of the manufacture. A plastic build we can understand and accept. Not uncommon in the manufacture of speaker equipment.

But we don’t like the mesh material on the soundbar or on the subwoofer cabinet. It might be vulnerable to damage and will certainly collect some dust. Having said that, it wouldn’t stop us from buying it. We would just be very careful with it.

While writing this Yamaha YAS-207BL Review, we have come to appreciate many things about this system. The build quality is decent enough, and it has some good basic features. It is not loaded down with tech, half of which most people never use, but it has a Bluetooth connection. The controls are easy and well laid out, and we like the front-facing bass port.

You can argue, rightly, that Yamaha has cut a few corners. If you are surprised or disappointed, you shouldn’t be. This is an entry-level budget system, and that is all it claims to be.

Open the door to better sound…

But the reason you buy such a system is for the sound. And for the price, you will find it hard to get a system that has a better sound than the Yamaha YAS 207BL. The sound may well be the best feature of this system despite the low frequencies being a little shallow.

If you can live without blowing the next-door neighbor out of bed, then you will be happy with this system. For the money, an excellent entry into a better home sound system. 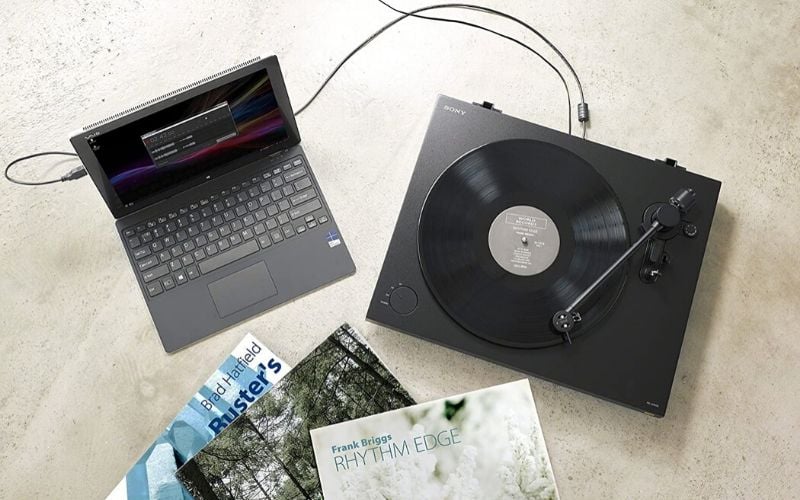 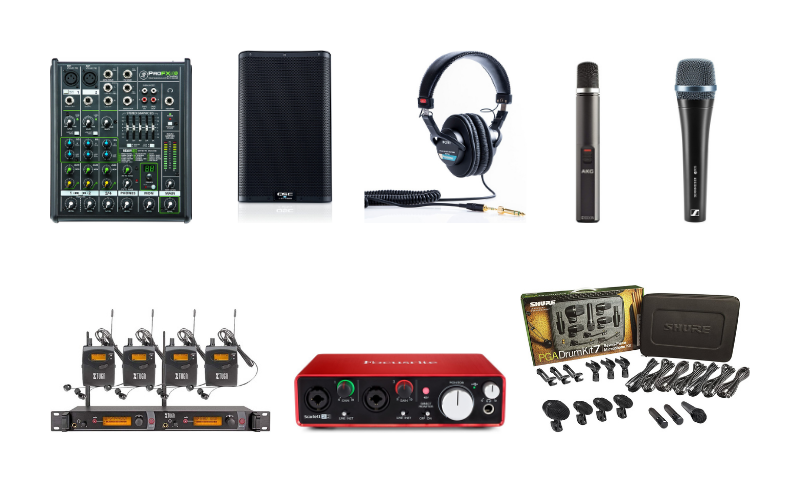 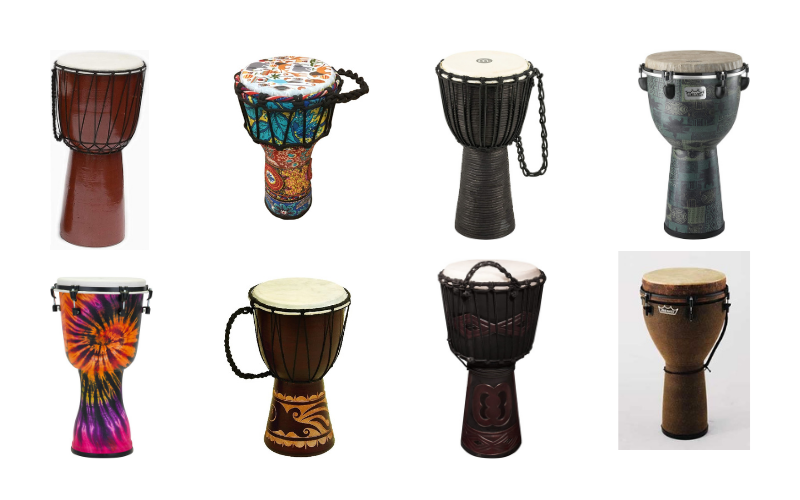 Top 8 Best Djembe For Your Consideration In 2021 Review