Home » Drums » What Are the Drums In a Marching Band?

Marching bands can be huge, loud, and exciting. They play and move with military precision and timing, and that’s mostly due to the drum section. These musicians lay down the rhythm that everyone else plays and marches to.

So what are the drums in a marching band? 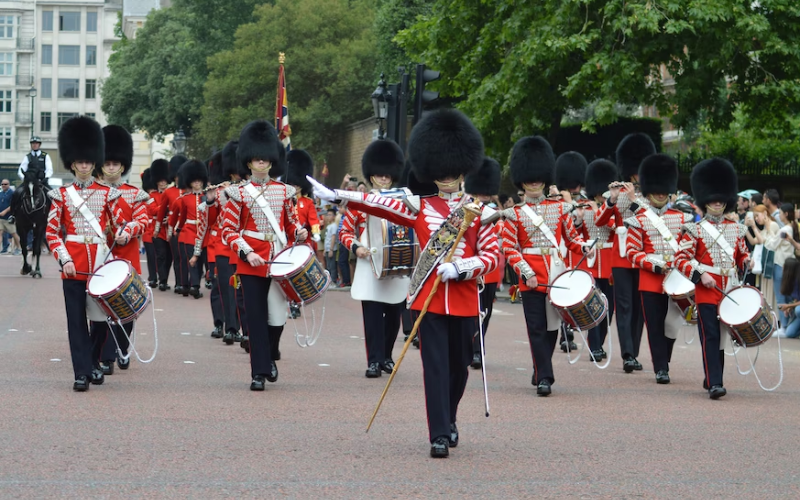 Marching bands aren’t all born equal, but there are some standard instruments in almost every band. These include drums like snares, tenors, bass, and timpani. Percussion instruments that you see in most marching bands include cymbals, xylophones, marimbas, and vibraphones.

So, let’s take a look at these marching band drums and percussion instruments in greater detail to get more familiar with each of them.

Drums In a Marching Band

A drum is an instrument with a head or skin stretched over a hollow tube. They come in all different sizes and shapes and can be played with sticks or by hand. Here are the main drums in a marching band. 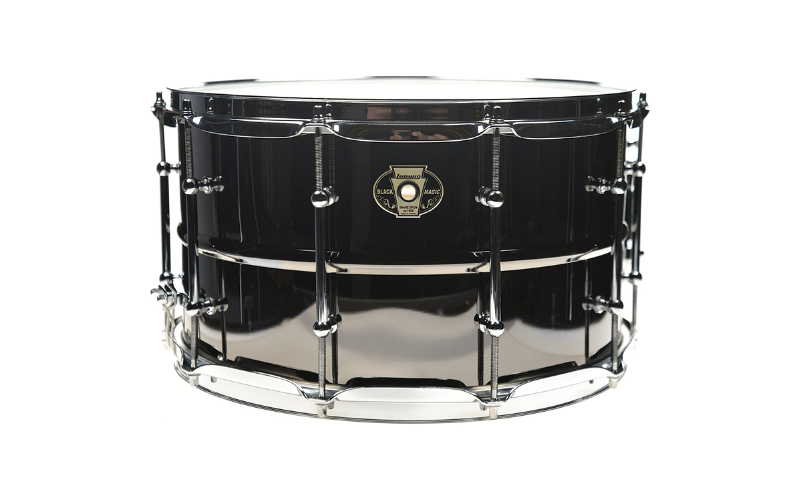 Snare drums, also called field drums, are the bread and butter of any marching band. These drums are found in anything from military bands to pipe and drum bands and, of course, modern competitive marching bands.

A snare is a set of coiled wires that’s pressed against the bottom head of the drum. These wires give an extra crisp snap to the head when the drum is struck. This makes them loud, sharp, and able to cut through all other sounds in the band.

Snares were first added to military drums hundreds of years ago…

This was because of their ability to create staccato, clear notes. This helped send messages and keep armies marching in time. They’re still the main drum in both marching bands and standard drum kits today, like this gorgeous Black Magic snare from Ludwig.

Snares can be played with matched grip or military grip, depending on the desired style. They’re always played with sticks, usually big heavy ones like these Vic Firth Corpsmasters.

Tenor drums are our next main drum in any marching band. These are tuned drums that are similar to the bodies of snare drums but, of course, don’t have snares.

They’re also very much like toms on a standard drum kit, except for one main difference – tenors normally don’t have bottom heads. They’re left open to let the sound ring out, and they can get very loud.

Tenors can be played as singles…

One drum is mounted from a shoulder harness, just like a snare drum. But they can also be played in sets and usually are. These multi-tenor racks can be two drums (duos), three drums (trios), four drums (quads), five drums (quints), or even six drums (squints or 6-packs).

Tenor drums are played with sticks or mallets, depending on the tone desired. They’re almost always played with a matched grip for better control when making flamboyant moves like crossovers. 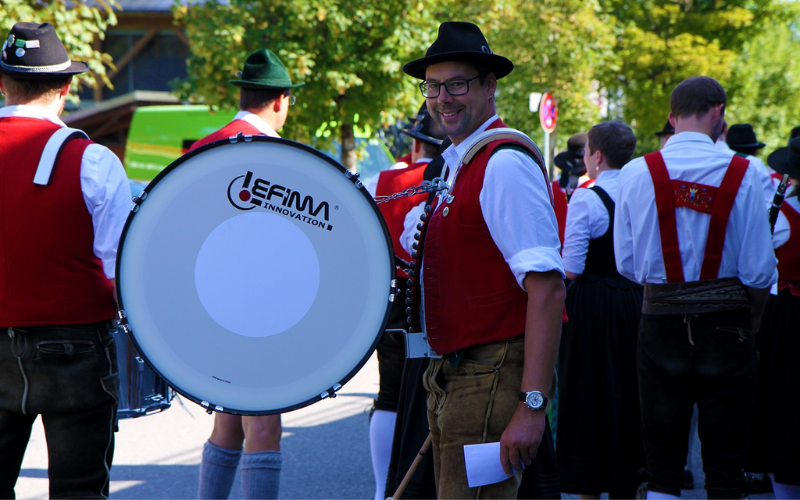 Yeah, here we go, the Big Daddy of drums! The bass drum is the main time-keeping drum of the marching band.

In standard 4/4 time, bass drums are normally struck on beats 1 and 3, which simulates a walking or marching rhythm (the old “left, right, left!”). Bass drums are big and beefy and create delightfully deep tones that you can feel in your diaphragm.

Most marching bands use a bass line…

This is anywhere from two to seven drummers, each wearing a bass drum strapped to their chest. The drums are all big and bassy, but they normally have different diameters to create different tones.

These drums can vary from 16” to 32” in diameter. And, if you get stuck with the biggest drum, believe me, it’s not going to be light.

Bass drums are struck with felted mallets like these bad boys from ProMark. They can also have string loops on them, which allow the bass line to swing them around and produce flourishes. Generally, bass drummers carry a mallet in each hand.

The last standard drums in most marching bands are the timpani. These drums are also called kettle drums for their kettle-like shape. They can be as big as some bass drums, but they have a few key differences making them sound very different.

First, timpani only have top heads, so they’re played with mallets on this head only. They’re played horizontally and are usually mounted on wheels because they’re so hard to carry around.

The other key thing about timpani is that they’re tunable…

Usually, using a key or a pedal, you can quickly adjust the tension on the head to tune them to set notes. This makes timpani unique and very precise.

Depending on the tone you want, timpani can be played with different kinds of mallets. They can be hard or soft and are made from rubber, felt, or even nylon.

Of course, there are other drums used by different marching bands besides these standard ones. Hand drums like djembe and field congas can be used to add a world music flavor to different pieces. And some bands even take things in a Rock direction by using a full standard drum kit. 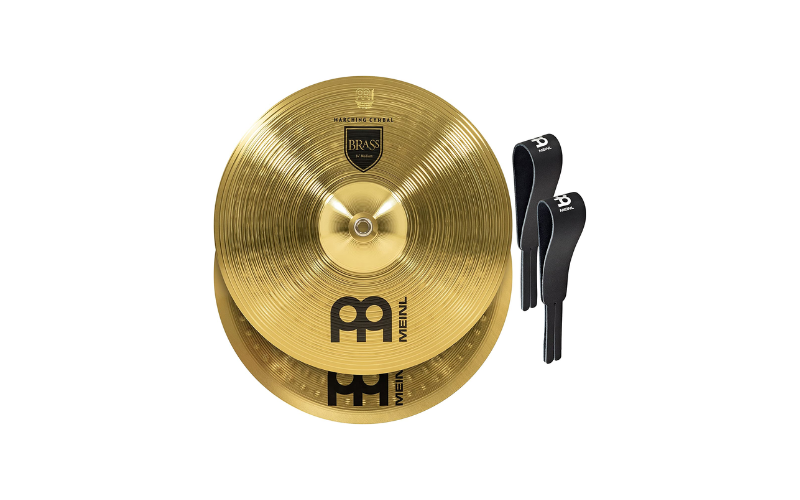 As you’d expect, cymbals are a critical part of the marching band drum and percussion section. With a drum kit, cymbals are supported on stands individually and are struck with sticks to make them ping or crash or whatever you want.

Not so on the marching band field. In a marching band, cymbals like these Meinl crashes are held by loops that strap through holes in their bells.

The cymbal player holds a pair of (usually) matching cymbals and strikes them together to produce small pings, succulent sizzles, and explosive crashes. Cymbals invigorate the band and accent the music, bringing excitement to any piece.

OK, just what the heck are the differences between all of these instruments? Most people see a bunch of bars set out on a rack and call the thing a xylophone. And while that makes sense, there are subtle differences that make each instrument unique.

A true xylophone is made of tuned wooden bars that are high-pitched and pretty dry sounding. That contrasts with a marimba, which has a much wider tonal range and warm, resonating notes.

Both of these instruments are played with mallets that can be hard (rubber or nylon-tipped) or soft (wrapped in yarn, or felt-covered).

If the bars are made from metal, it’s no longer a xylophone…

Instead, this instrument is normally called a glockenspiel (which is German for “bell set,” by the way), or bells, or even orchestra bells. Because the bars are made from aluminum or steel, the glockenspiel has a high, bright sound that’s also quite piercing.

There’s also a special bell set that’s laid out in the shape of a harp. It’s called the “bell lyra,” but it’s really the same as a glockenspiel.

It is like a glockenspiel that has an extra-special secret. Under each metal bar, a vibraphone has a resonator tube, and in that tube is a round disc. The discs spin on a rotating axle when a pedal is pressed, and this gives the vibes a wavy sound that’s unique.

All of these instruments – the xylophone, marimba, xylophone, and vibraphone – can be large or small. Large versions will sit on the ground, most likely with wheels to help move them around. Smaller versions can be held on shoulder racks, much like the snare and tenor drum racks I’ve already covered. 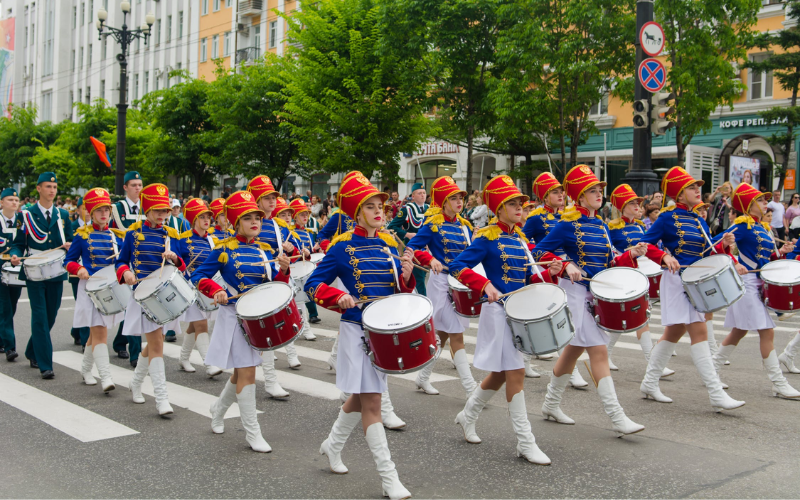 Just like there are a whole bunch of different drums you can find incorporated into marching band music, there can also be lots of percussion instruments. Some pieces call for unique sounds, while other sounds are added by the band director to make their band sound different.

Since percussion is anything struck or hit to make a sound, these instruments can be almost anything. You can find cowbells, wood blocks, claves, shakers, Turkish crescents, chimes, and slapsticks in many bands.

You may also find improvised instruments ranging from anything like metal sheets to water bowls to boom whackers to cannons. The sky’s the limit when it comes to percussion sounds.

Well, check out our in-depth reviews of the Best Snare Drums, the Best Portable Drum Kits, the Best Bongos, the Best Congas, the Best Cajon Drums, and the Best Hang Drums you can buy in 2023.

What Are the Drums In a Marching Band? – Final Thoughts

Drumlines and percussion sections of marching bands have to be perfectly in sync. After all, it’s they who create the rhythm that all the other members of the band play to and march to. They also have to move, carrying some of the heaviest instruments up and down the field.

Most bands will have snare drums, tenor drums, bass drums, and very often timpani. They will also have cymbals and one or more of the mallet percussion instruments, the xylophone, marimba, glockenspiel, and vibraphone.

Standards are not always uniform…

Of course, bands can also incorporate any number of different drums and percussion instruments they like into their ensembles. They just need to have enough people to play them.

But that’s seldom a problem because the drum and percussion sections of marching bands attract people who want to hit hard and make a heck of a lot of noise. 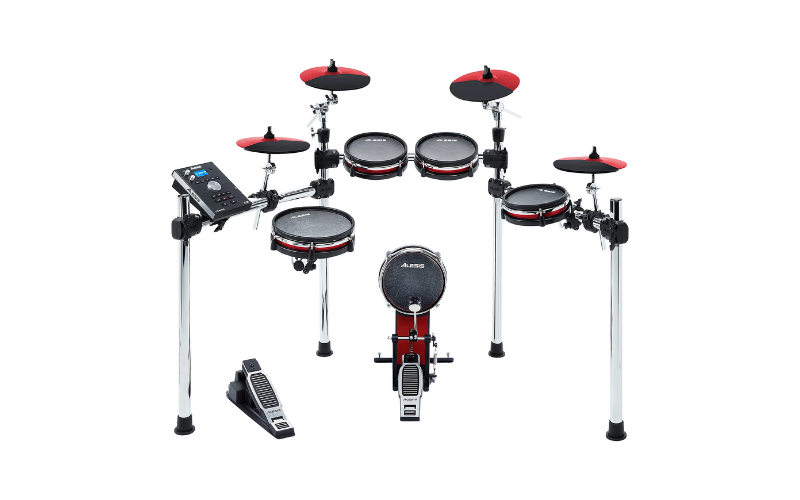 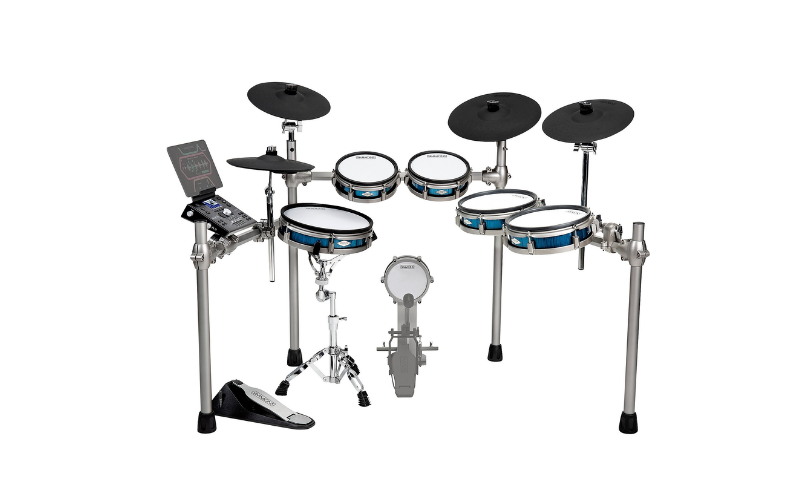