Unless you have been living under a rock for the past few years, you’ve most likely used (or at least heard of) the Ultimate Ears Wonderboom line of portable Bluetooth speakers. When the first generation of these great little speakers hit stores in late 2017, they flew off the shelves, impressing critics and users in equal parts. But, they weren’t without their flaws. 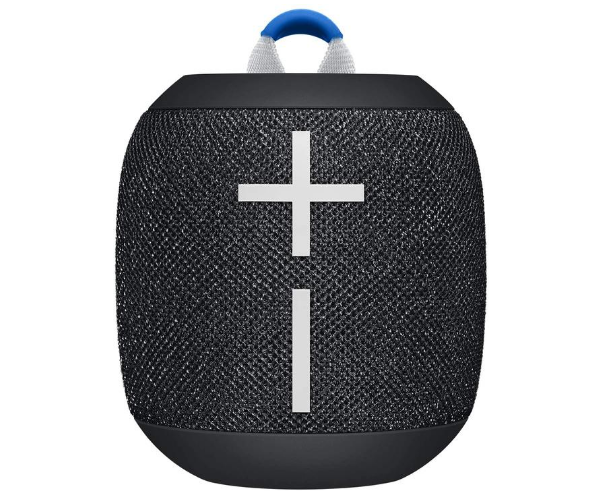 That’s right. Even though the original Wonderboom was very highly rated, we thought that the soundstage needing tweaking and could do with being boosted. Also, the battery life was not the most impressive, and (for a speaker that was billed as fully portable), the waterproofing was a little shoddy.

So, it goes without saying, that we were pretty excited to get our hands on the brand new version for this Ultimate Ears Wonderboom 2 review and see what upgrades UE had made. And let’s just say we were not disappointed!

With an updated design, new battery assembly, and increased waterproofing (plus some cool new features). It seems that UE have listened to the few criticisms that surrounded the first generation.

Have these changes worked?

Stick around, as we take a look at this newest incarnation, and find out what this super handy portable Bluetooth speaker has to offer… 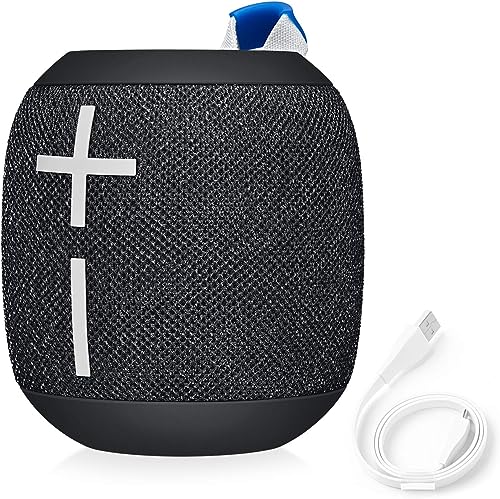 Keeping in line with the overall aesthetic of the first generation, even we would have problems with picking the Wonderboom 2 out of a lineup. Really, the outward design has not changed at all, and that’s fine with us, as we always liked the design.

The only true give away is the change in color combinations and the addition of an elastic strap. The dimensions are almost bang on the same as the original (104 mm x 95.3 mm – 2mm wide). However, this one weighs five grams less.

The button layout is about as simple as it comes. On the top, you will find the power and Bluetooth pairing buttons. While on the side are the impossible to miss volume controls, and on the bottom is the all-new “Outdoors Boost” button.

This mode increases the overall volume for use in noisy environments. All the buttons are hidden underneath the rubber membrane for waterproofing. This type of button design can be a little hit or miss, but UE have done a great job here.

At the back of the unit is a rubber membrane door that hides the micro-USB charging port. That’s right, no USB-C here, unfortunately. Not a huge issue, but definitely a missed opportunity by UE to sweeten the deal (still only two and a half hours to fully recharge, but more on that in a little while…).

In terms of construction materials, Ultimate Ears have really gone all out. The “Athleisure-inspired two-tone fabrics” looks great, and it covers a fully waterproof skin. 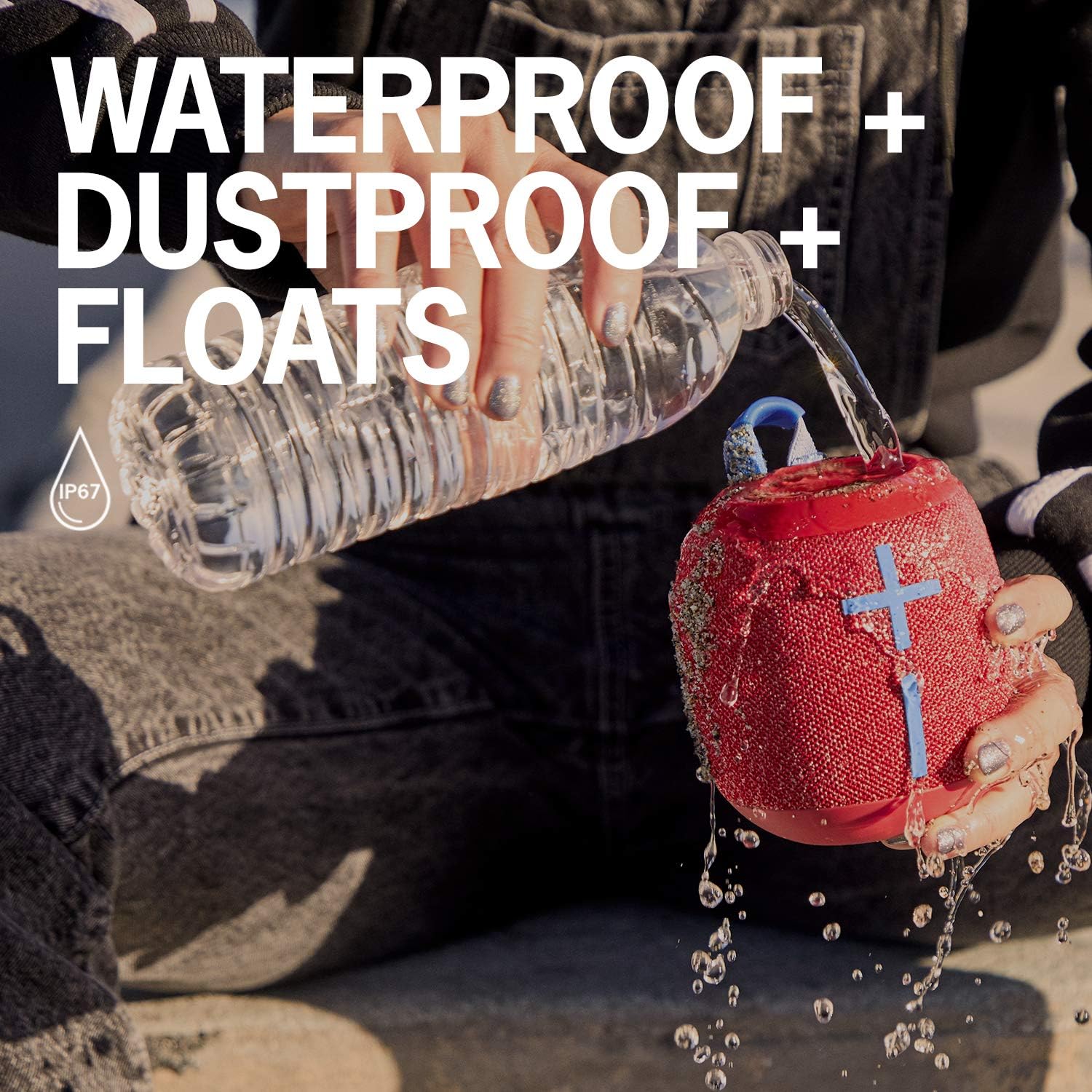 Well, to an extent. With an IP67 rating (a big jump from the IPX7 rating of the last model), the Wonderboom 2 is waterproof, dustproof, and it floats!

That does not mean that it can live underwater, but it can withstand up to 30 minutes at a depth of three feet (one meter). And it will have no problems with bobbing around in the pool next to you for a much longer period; if that’s you’re thing?

We like to fully test speakers when reviewing. So we dropped the Ultimate Ears Wonderboom 2 from a height of four feet once a day during our two-week-long testing period. It held up admirably, with zero issues after 14 drops. It is rugged, to say the very least!

So, have UE fixed this issue?

They certainly have! The difference was obvious from the moment we turned this one on! The volume boost we were hoping for is better than expected, with half volume here equaling full power on the last model.

So much better. For a speaker, this size, the depth, and color of sound that UE have been able to create is pretty remarkable. And thanks to the wrap-around grille, the Wonderboom 2 boasts full 360 degree sound.

A lot of speakers make this 360-degree claim. However, not many actually produce the same audio quality all the way around. The UE Wonderboom 2 comes with the sonic goods, and it is a real pleasure to listen to and look at.

What about “Outdoor Boost” mode? 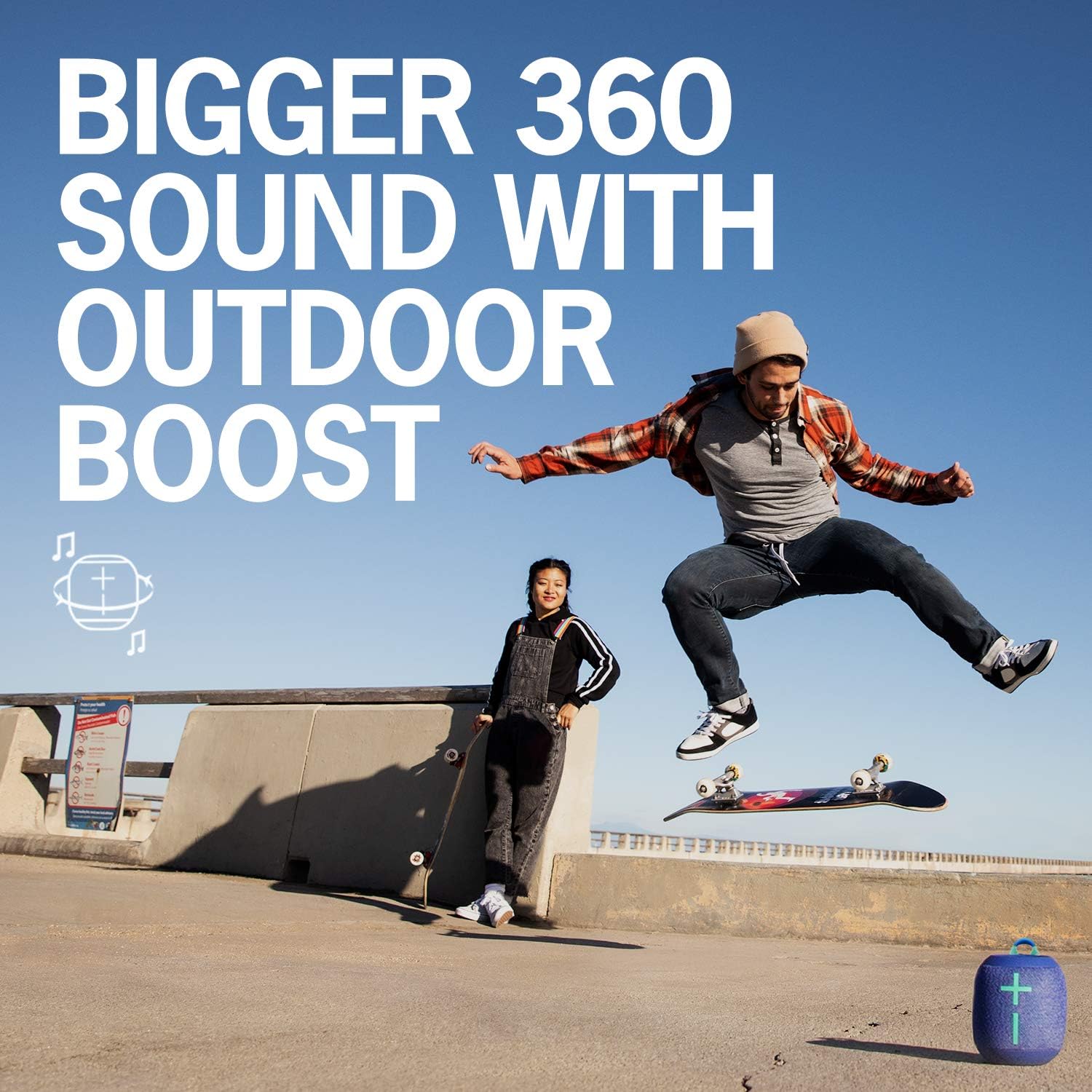 To achieve an even fuller sound without creating unwanted distortion, the bass frequencies are toned down slightly, with the mids and treble frequencies receiving a small boost.

But, to be totally honest, this mode is unnecessary. The speaker is more than loud enough in normal mode, and it just diminished the sound quality. By all means, check it out for yourself, but we reckon it’s a bit useless, especially if you can daisy chain Multiple UE Wonderboom 2 to create a bigger sound. Stick around to hear more about that!

The battery assembly has been totally overhauled, taking the overall playback time from 9.5 hours to 13. However, this is nowhere near as long as flagship models are offering these days with the UE Megaboom 3 having a 22 hour battery life. For a speaker this small, the battery is more than acceptable.

As previously mentioned, the micro-USB cable is capable of recharging the unit in a smidge over two and a half hours. During testing, we found this to be true, and that after only 30 mins of charge, we got five hours of playback. Not bad at all. 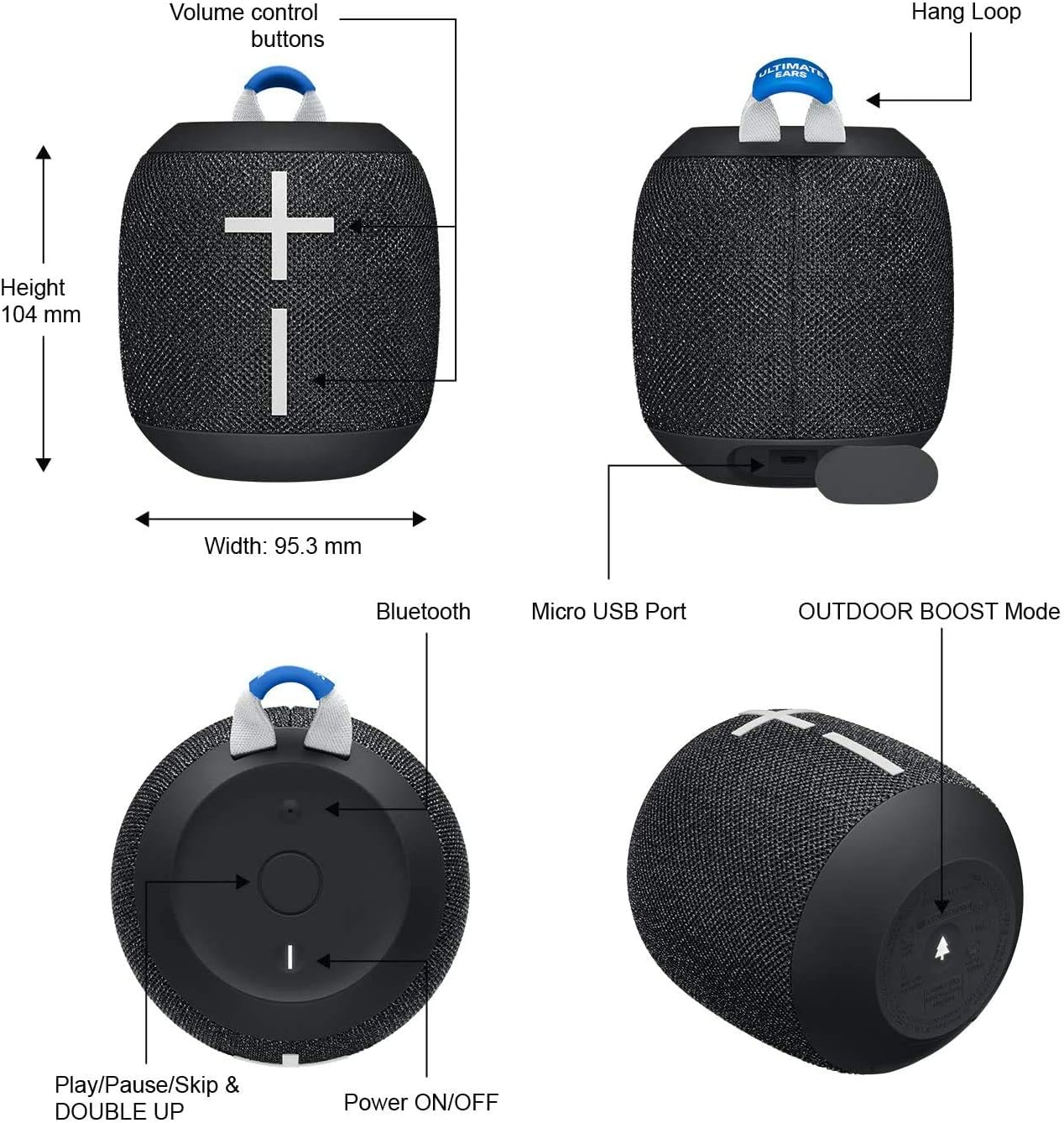 Operating with a Class 1 Bluetooth 5.0 system means we get, on paper, up to 100 feet (33 meters) of range. However, during testing, we were actually able to push that a little further.

And with the “Double Up” daisy chain option, UE made it possible to wirelessly connect two of these speakers simultaneously to bring your listening experience to a whole new level! Simple and easy to set up, this system lets you effectively double the sound and enables stereo listening for a more authentic feel.

Or, if you’re a fan of Ultimate Ears, check out our reviews of the Ultimate Ears Boom 2, the UE Boom 3, and the staggering UE Hyperboom.

So, what have we learned?

Well, if you are on the lookout for an extremely durable, great-sounding speaker that has a long battery life and even floats, then look no further than the Ultimate Ears Wonderboom 2.

This is the sort of speaker you rarely have to worry about and is great for traveling or at-home use. Plus, there has never been a better time to buy one as the deals going right now are amazing! So, check it out to see exactly how much you can save today! 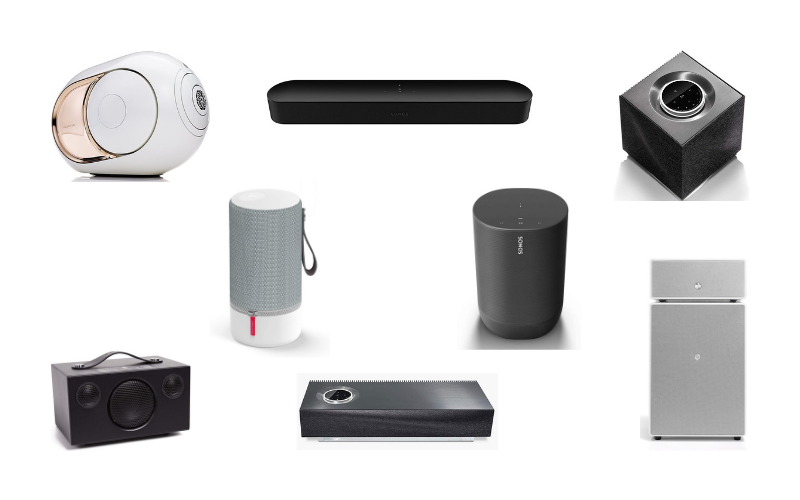 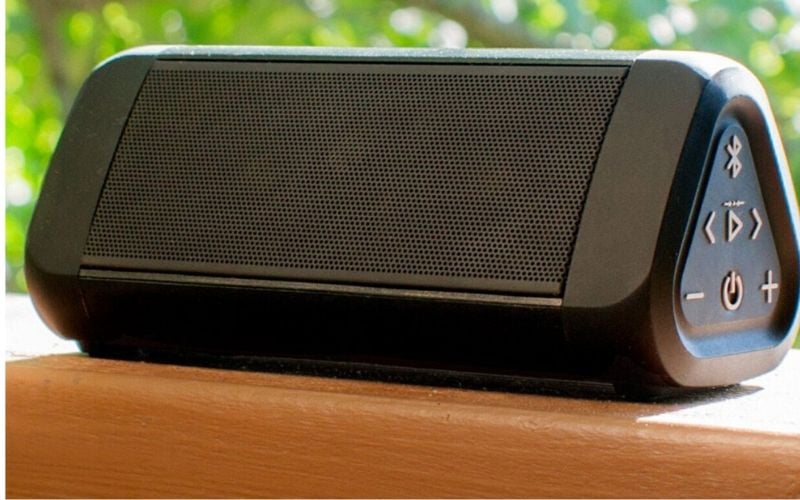 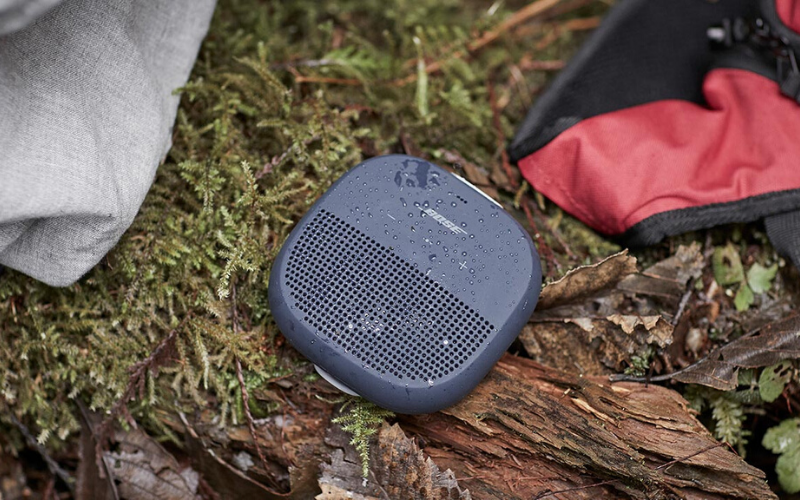