There are a lot of pianos around. To the casual observer, there are probably a lot more pianos than you realize. But how do they differ, and what makes each one unique? Let’s find out as I go through the Types & Sizes of Pianos Explained.

Through the Classical period of Mozart and his contemporaries, the first keyboard instrument was the harpsichord. But the dynamic response of the instrument did not suit a new breed of composers and musicians.

They had no control over the sound as the strings were plucked. They needed something better. It came with the creation of a crude piano that had hammers that struck the strings instead. That way, you could develop a system to control the dynamics.

He was working for Prince Ferdinand de Medici of Florence. His title was “Keeper of the Instruments.” An important position in those days. He solved the problem in the early 1700s, and the original piano was born.

The first of this new instrument that was finally made had 49 keys, and they didn’t sound as we now know them. They didn’t look like them either. In those days, the white keys were black and the black keys white.

In some ways, it solved the sound problem of the dynamics. At 49 keys, though, it was not the finished article. The 88-key versions came nearly one hundred years later.

What did Mozart play? 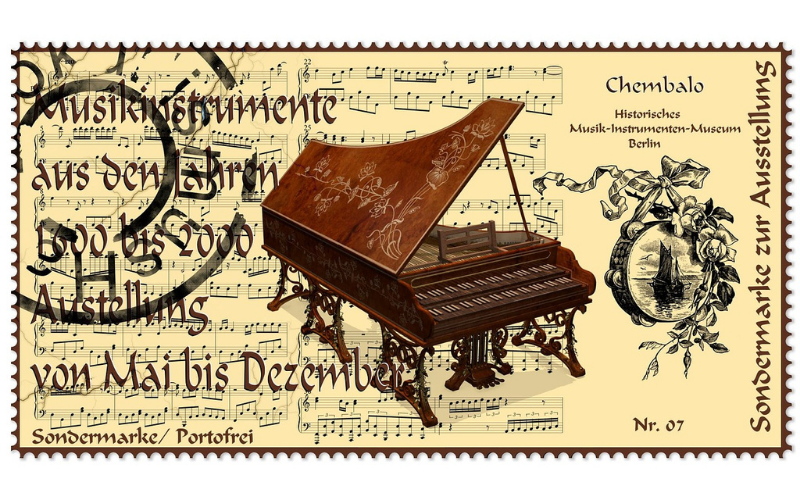 A fun little fact. Mozart’s piano was returned to Vienna in 2012 and then on to permanent display in Salzburg after two hundred years.

The piano was slow to catch on. At the end of Beethoven’s life nearly one hundred years later, it had just begun to be accepted. Only then did it become the principal keyboard instrument. Beethoven himself, of course, had a lot to do with that.

Today we have sophisticated pianos. Most have 88 keys, and they are usually the first introduction to music for most people. Some people buy keyboards. While they are great instruments and have their place, there is nothing like a real piano with its weighted keys.

But as we said at the outset, there are so many different types of piano. Many of them sound different, some are bigger than others, and some even a different shape. Let’s try and explain them all.

There are two designs. Vertical and Horizontal. Within those two broad categories, there are ten subdivisions. Let’s start with the Vertical. 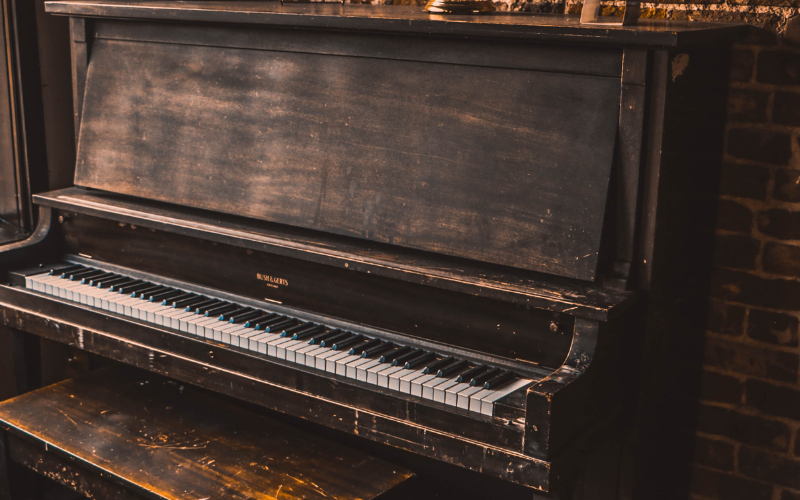 Sometimes known as “Grandma’s piano.” If you grew up around a piano, it is likely to be one of these. Of the vertical pianos, this is the tallest and can stand up to five feet in height. It is also quite wide at just under five feet.

It became so popular because it is, in musical terms, might be called a “workhorse” instrument. Invented in London in 1826, it quickly became the most popular type of piano.

It has a rich, powerful tone and maintains its strong sound despite sometimes getting some rough treatment. That is not to say it doesn’t need maintenance because it does. But it is going to last you a long time.

Back in the day…

One of my earliest memories is being taken down to the Ruskin Arms pub in Manor Park, East London, at about five years old. I sat in the corner with other kids while the dads got on the “old upright” in the corner.

Incidentally, Steve Marriott, then about 8 or 9, of the Small Faces and Humble Pie was often there as well. His dad had a fish, and jellied eels stall outside. But that’s another story. The point of this is that the upright has been a mainstay of piano design for over a hundred years.

If you really want a “real” piano but are a bit short of space, then the Spinet might be a solution. This is the smallest vertical piano. The height is usually around just over three feet tall, and it is less than five feet wide.

The downside is that they often need tuning, and they are certainly not as loud as larger pianos. The build is quite specialized, and therefore they can be more expensive to repair if they go wrong.

This is a piano that is made in different stylings, which makes it popular amongst those who want something different. They have the same width as the Spinet but are a little taller, at around three and a half feet.

Whilst they are still somewhat small, they do have a better tone than the Spinet. Some of that is to do with the size. But the design of how the hammers strike the keys makes the sound very enhanced and clean. Today these are some of the most popular vertical pianos.

Another step up in size takes us to the Studio. These are the kinds of pianos you might see in teaching environments. They are slightly taller again than the Console but with the same width.

The reason these pianos are so popular for teaching is the richness of the tone. The soundboard is larger, and the strings a little longer. This produces a great sound. Not quite comparable to that of the grand pianos. But with the better manufacturers, very close.

A bit of music history…

You often see footage of John Lennon playing “Imagine” on his white Grand Piano at his house in Ascot. But the song was written on his Studio piano he bought in about 1970 and was later bought by George Michael.

He tried to record on the Grand, but the reverberation in the large room was too great. He did it in the recording studio, not at home on a Studio piano.

These are the options for vertical pianos. They sometimes have suffered from a cheap and second-rate reputation. In some cases, it has been warranted, but in most cases not. They are well-built and functional, and some will deliver an excellent sound. 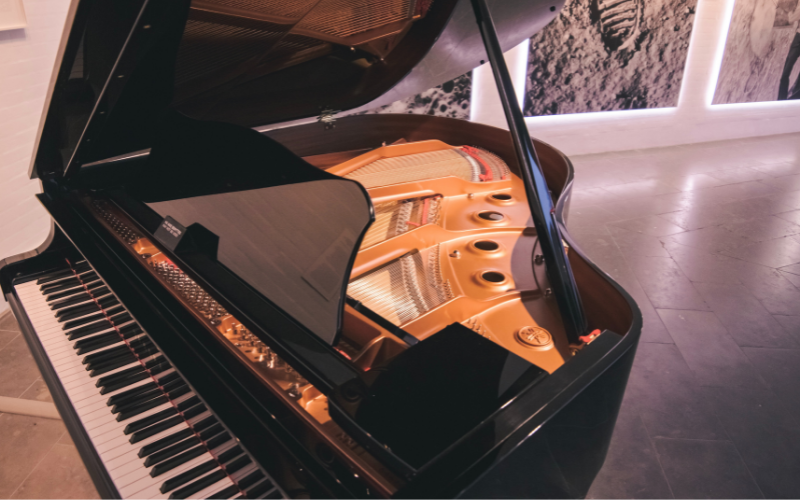 Halfway through the Types & Sizes of Pianos Explained, and we move on to what you might call the “glamor” pianos. Usually, these instruments are seen in concert halls, upmarket recording studios, and on TV. They are often called “Grand Pianos,” but there are different versions of the “Grand.”

The way they are designed and made creates a richer, more accurate sound. This gives the player much better control over the dynamics and the performance. There are six types of horizontal pianos.

As the name suggests, a scaled-down version of its bigger cousins. This is the smallest in size of the horizontal pianos. Perhaps “Petite Grand” is a little bit flattering. Nevertheless, it does produce a good sound.

Its big advantage is its size. Ideal for those that are a bit cramped for space but would still like a horizontal option. It will usually be between four and a half feet and just under five feet in height.

The next size up and one of the most popular pianos around today. It will measure up to five and a half feet high. What sets this apart is its tonal qualities.

This is an impressive-sounding piano but also looks good. And not being full-size, it is convenient but also falls within many people’s price bracket. If you have the budget, it is certainly a piano worth considering if you have the room.

And so now we start to get larger and louder, but also better tonal quality. This piano can go up to just over five and a half feet in height.

The larger size has its design benefits. The soundboard is larger, and the extra string length enhances the sound. But with a piano such as this, maintenance and care need to be taken care of. This is too big an investment to not preserve it carefully.

This used to be called the “living room grand piano.” Aptly named, it was a piano that was often purchased by socialites who wanted to impress. Always strategically placed to impress visitors, they are quite often seen in films.

If it didn’t actually get played, it is a travesty. The larger size over the Medium Grand gives depth and richness to the sound. Often mistaken for a concert grand, it stands just over six feet high.

Often referred to as the “Semi-Concert Grand Piano” because of its size and great sound. This is starting to reach towards the heavens, now going up as high as six feet seven inches. With that, of course, comes the extra size, and with that comes a bigger sound. You don’t often see them around. They are certainly too big for the average house.

The real deal, as some would say, and it probably is. Standing at an enormous nine feet high, it is imposing, to say the least. This is the piano you will see at all the great concert halls in the world played by the finest musicians. One of those concert halls is in Vienna. How apt. Back home to Mozart, where you could argue the piano took its first tentative steps.

Well, the Germans still probably lead the way, so no real surprise there. Bosendorfer, Bechstein, Bluthner. But now we have others in Yamaha and Kawai. Yamaha is now seen at most of the major venues around the world. And we shouldn’t forget Steinway, still a name to be reckoned with.

We aren’t going to include options for purchasing every style of piano. But these are some extras you might find you will need.

Not got room for a Grand Piano?

Ten to choose from depending on the space you have available and your budget, of course. The piano has come a long way, but it still goes through changes.

Some manufacturers are extending the length of the keyboard and adding extra keys. A bit like they have by adding a 7th and 8th string to the guitar. Or even a fifth and sixth string to a bass. Some people just can’t leave things alone. There is a saying, “if it ain’t broke, don’t fix it!”

You will also find some alternatives depending on where you buy your piano. In Europe, there are only two pedals. In the US, there are three. Whatever your options, there are plenty to choose from. I hope I have been able to explain a few and give you a little insight on this great instrument along the way. 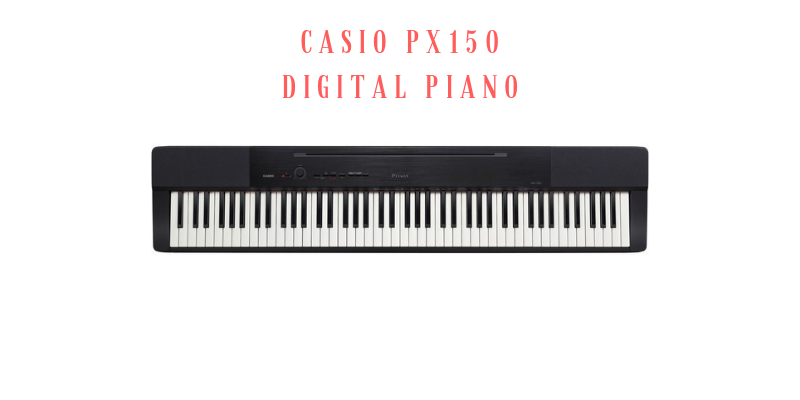