There was a time when Turtle Beach manufactured the best gaming headsets on the market. Taking it to the competition with the perfect mix of comfort, style, and amazing sound quality. However, over the years, competitors have raised their game, and now Turtle Beach are just one of many good gaming headset manufacturers.

So, with this increase in competition, how does the Turtle Beach Stealth 600 measure up? It’s a wireless headset made for the PS4, Xbox, or PC and comes in at a comparably cheap price point when compared to its rivals. To keep the price low, Turtle Beach have made quite a few compromises.

The question is, has this low price point compromised the overall quality? Is it a contender for the best budget wireless gaming headset? 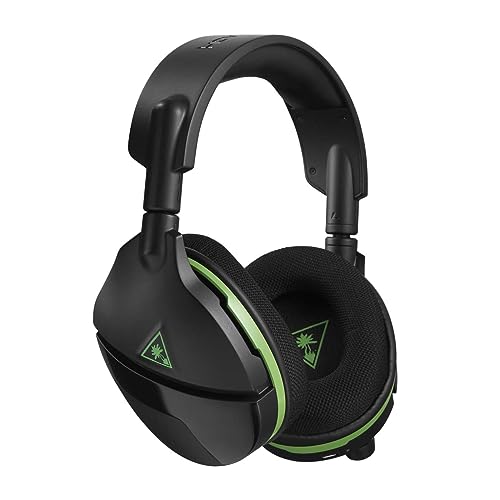 The look and feel of the Stealth 600 are basically what we’ve come to expect from Turtle Beach. It’s made from glossy, black plastics with green accents on the Xbox version and blue accents on the PlayStation version. It certainly has the gaming aesthetic going on. Although, it’s certainly less obnoxious than a lot of other gaming headsets out there.

It’s an over-the-ear design, and the headband can be adjusted to fit the full range of head sizes. The adjustable slider is made from plastic and is an obvious weak point that could potentially break under rough treatment. So, you’ll have to be careful. To help with fit, the ear cups tilt in and out to better augment the profile of your head.

The headband is generously padded anywhere it comes into contact with your head. However, it could do with being a little more flexible in all directions. It’s doubtful that the Stealth 600 would stand up to too much abuse.

The left ear cup is home to all the controls. Presumably, this has been done to cut down on cost, but the result is a somewhat crowded experience. Here you’ll find controls for both the overall volume and the chat volume. While it is easy enough to remember which is which, in the heat of the moment, it’s also not hard to confuse the two with irritating results.

A power button, a pairing button, and a sound mode button can also be found on the left ear cup. There are four different sound modes to choose from. The micro-USB charging port is also crammed into the left cup.

For practical purposes, it would have been nice to see both ear cups housing controls. But at this price, it’s completely understandable why Turtle Beach have gone down this design route.

Both ear cups fold flat so that they can be easily stored in the fabric carrying pouch. This doesn’t actually make the footprint much smaller as a hinged design does. That said, the thinner profile means it will fit in any bag more easily.

Lastly, a boom microphone is included that folds back parallel to the left ear cup. It’s not a design that you see too often, but it’s a neat enough storage solution when not in use. 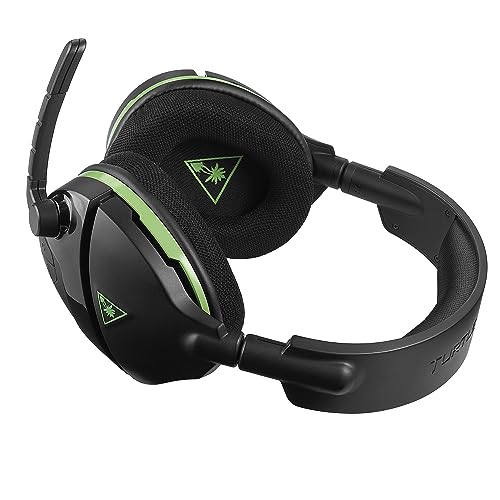 As mentioned, there’s a good inch of plush padding on the headband, and the ear cups are equally well-padded. We used the Stealth 600 for gaming sessions of over five hours with no comfort issues whatsoever. The most comfortable gaming headset? Not quite, but certainly an affordable alternative.

Turtle Beach have also made the Stealth 600 a much more pleasant experience for gamers who wear glasses. The padding on the lower and upper part of the ear cup is a dense foam, while a softer foam is found where the arm of your glasses will be.

As a result, the arms don’t get pressed up against your head as they are prone to do with over-the-ear headphones. A nice touch indeed.

Unlike most gaming headsets, The Turtle Beach Stealth 600 sits quite far back on the head. This isn’t the most natural position for headphones and feels quite strange at first. However, they stayed in place just fine, which is the most important thing. 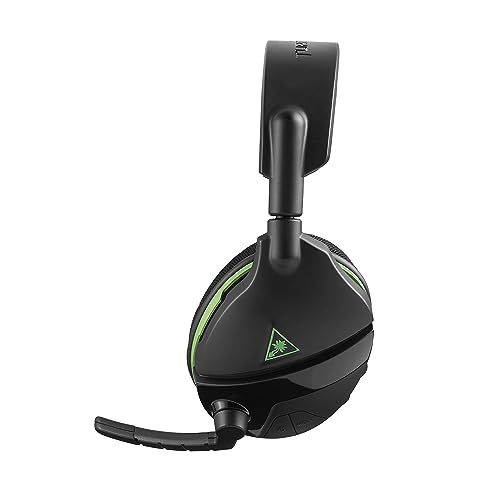 Turtle Beach is known for putting pretty decent microphones on even their budget friendly headsets, and the Stealth 600 mic is no exception. It does a pretty decent job of isolating your voice and filtering out medium to low-level background noise.

To mute the microphone, you simply tilt it back away from your mouth, and it will automatically turn back on when you lower it. Simple but effective functionality.

For multiplayer chat whilst gaming, it works just fine. For anything more technical, you’d be well advised to find a headset with a more advanced mic.

The Stealth 600 has a pretty decent battery life of 15 hours and charges back up to full capacity in an hour. Whilst not world-beating, this should meet the needs of even the most hard-core gamers out there. Everyone has to stop and eat at some point.

Recharging is via a micro-USB to USB cable. Unfortunately, you can’t charge and listen at the same time. Even if you could, the cord it comes with is way too short to make that practical. 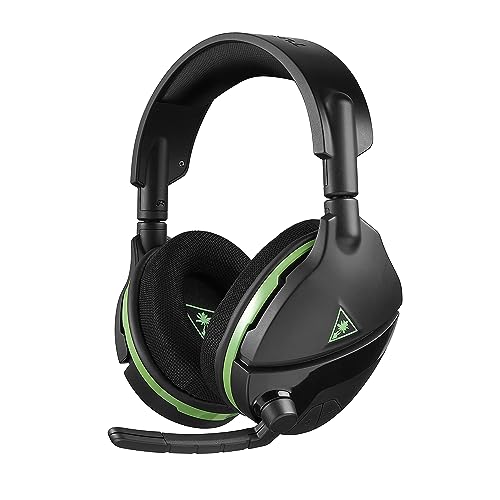 The pairing process for both Xbox and PlayStation is very simple, with direct syncing at the touch of a button. The only difference is the PS4 requires a dongle and the Xbox doesn’t. The wireless range is up to 20 feet which is more than adequate considering most gamers are no more than 10 feet away from their screens.

We didn’t have any connectivity issues, with a flawless signal experienced throughout. Not having to deal with wires also improves the overall experience, especially if you don’t have a wireless controller. That alone makes this one of the best wireless headsets we have reviewed. 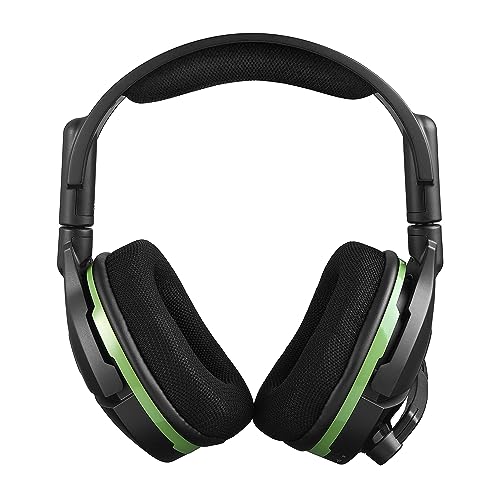 Where it matters most, the Turtle Beach Stealth 600 certainly delivers. Balanced and clear audio is what you get. You can choose from either stereo or surround sound. Although when gaming, we’d definitely recommend using the surround option for a more immersive experience.

We played several games across genres and found the Stealth 600 to perform well across the board. If there is any criticism, they could do with being a little louder. Understandably, Turtle Beach are trying to conserve battery life by limiting the maximum volume. But the sacrifice of a couple of hours of playback for extra volume would be a worthwhile one.

Furthermore, they also aren’t the best at background noise cancellation. This is because of the fabric material used on the ear cups. In most domestic environments, this won’t be a problem, but it’s still something to be aware of.

The signature profile is the intended sound the engineers meant the headset to have, and we found no need to deviate from this profile. There is also a bass boost, a treble boost, and a chat boost profile, which in all honesty, didn’t really improve the overall sound whilst gaming.

The bass profile helped give music more of a boom. But other than that, the signature profile provides the best overall audio experience.

The most pleasant surprise was how well the Stealth 600 sounded when just listening to music. Once connected, everything from classic Neil Young to modern electronica sounded well-balanced and full of life. Not what you expect from a gaming headset.

You may also like our comprehensive Audio-Technica ATH-M50x Review, our Razer Nommo Chroma Review, our Turtle Beach Recon 200 Review, our Astro Gaming A20 Gen 1 Review, and our AmazonBasics Pro Gaming Headset Review for more items currently on sale.

For such a low price, you’re unlikely to find a gaming headset that sounds this good whilst offering wireless connectivity. Yes, there are a few design flaws that take the shine off things, but in terms of value for money, it would be a challenge to do any better.

The Turtle Beach Stealth 600 is a tough act to beat in its price range. If you want more features and a less cluttered design, then you’ll probably have to spend twice as much, and even then, it may not sound as good as the Stealth.

Top 10 Most Comfortable Headphones For Your Budget 2021 Reviews 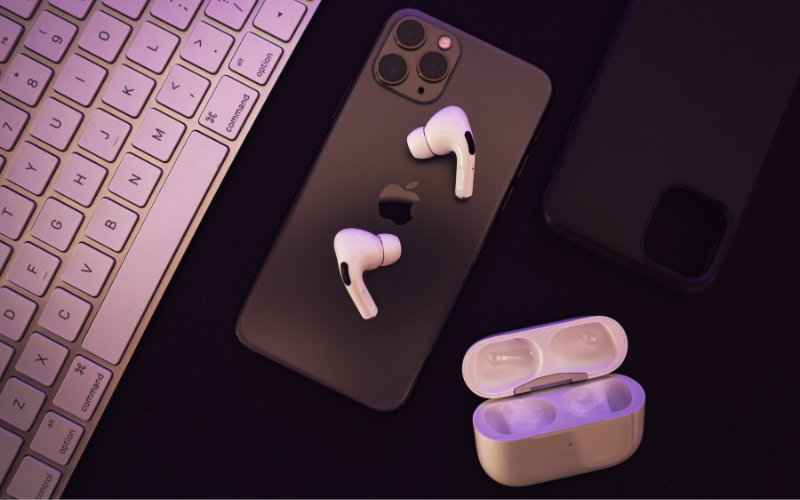 AirPods Pro vs Beats Powerbeats Pro – Which is the Best?