Treblab might not be as well known or as sought after as other brands like JBL or Ultimate Ears, but they deliver excellent products at a superb value.

When it comes to portable Bluetooth speakers, usually some compromises have to be made. These compromises are normally to do with size limitations. To produce a loud and rich sound, you usually need speakers with large diaphragms.

This is mainly due to the nature of sound and how speakers reproduce sound. The amount of power that is fed to the speakers also plays a role, which is why we were surprised to see a 25W set up on such a small speaker.

With nearly double the amount of power of most speakers of its size, so how does the HD77 perform? Let’s find out as we go through our in-depth Treblab HD77 Review… 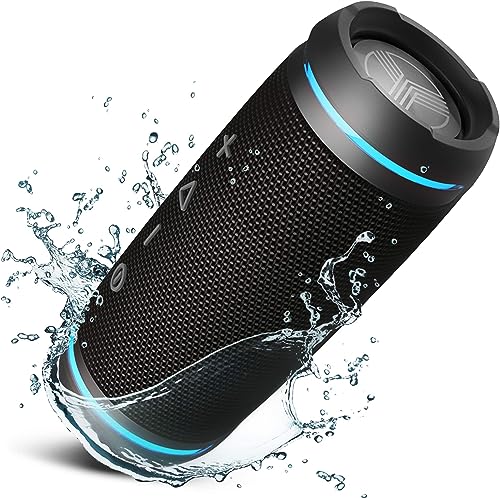 About the same size as a large can of Coke, the HD77 easily fits comfortably nearly everywhere.

The aluminum frame helps to make it not only durable but lightweight as well. The rest of the speaker is covered in ABS plastic, which makes it drop-proof as well. It’s able to take a drop from just over three feet, which is from the table to the floor.

Similar to the cylindrical designs from JBL’s Charge series of speakers, the HD77 has two flat bottoms, which allows it to sit vertically on any surface. There is a decent amount of grip from the ABS plastic. It stays secure, even if the surface it’s standing on takes a good knock.

The large, extruding buttons on the speaker grill is reminiscent of Ultimate Ear’s Wonderboom speakers. We like the design, and the buttons don’t feel cheap at all. 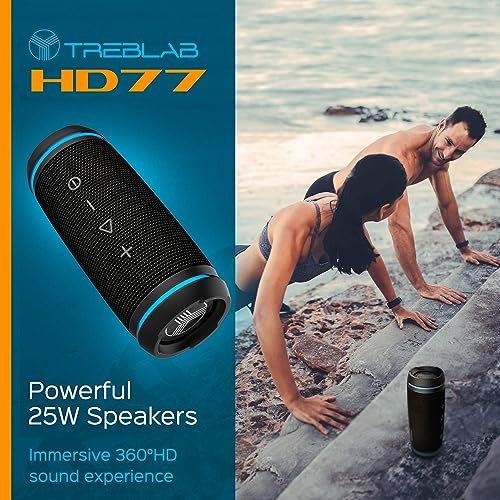 This is the second most important feature of all portable Bluetooth speakers, right underneath sound. If a portable speaker isn’t really portable, then you can’t really call it a “portable” speaker, could you?

Waterproofing is important, as it will eventually end up somewhere where it might get wet. Whether it be poolside at a barbeque or near a river on a camping trip, or maybe you’d like to take your portable speaker out on the boat trip.

Ready for the elements?

Well, we have good news here. The Treblab HD77 does have an IPX6 weatherproof rating. This doesn’t mean it can be submerged underwater, but it does make it rain, dust, and splash-proof, which is more than adequate at its price range.

The auxiliary port is hidden away behind a rubber cover, so it is important to keep that shut to maintain the waterproofing.

How does the Treblab HD77 sound? 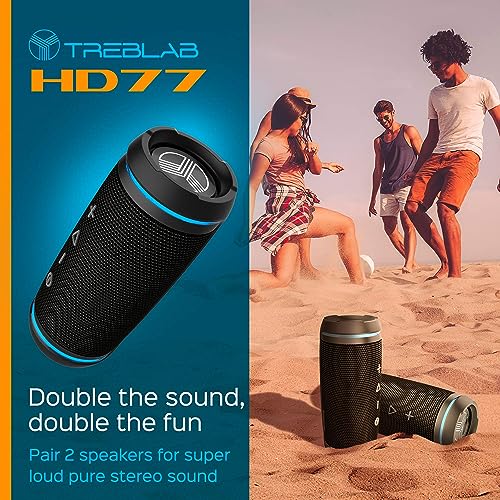 Treblab r have loaded the HD77 with two 12.5-watt speakers as the driving force of its sound. These are quite large speakers to see on such a small device.

This large amount of wattage helps to make the speaker louder than anything its size in the market at the moment. This makes it great for outdoor use, where some extra volume goes a long way.

Portable speakers tend to boost the very low-end frequencies whilst also boosting the high-end. This often ends in disaster due to audio masking. However, Treblab did something different. This speaker seems to have shifted its focus to the mid-range frequencies the most. This means clean, clear instrumentation and vocals, albeit with a slight lack of bass or cymbals and hi-hats.

As we’ve previously mentioned, portable speakers usually have to pick what to keep and what to leave out. In the HD77’s case, Treblab decided that audio clarity is more important than a thumping bass sound or shiny high frequencies.

So, what we are left with is a speaker that has great, clear music even at high volumes. But it does lack quite a bit of low-end.

There are two audio modes as well. Indoor and outdoor. The indoor mode does offer a bit of extra bass at the expense of volume. Outdoor mode boosts the volume quite a bit, but with much less bass response.

The 360-degree sound doesn’t do much, especially if you use it outdoors, which this speaker has been built for. It seems like an afterthought or marketing ploy. If you do find a good spot in a room, it doesn’t sound too bad, but won’t blow you or your friends away.

That said, when we got hold of another one and connected them, they sounded great. There was a better sense of spatial awareness within the room and sounds coming from different directions.

Again, nothing mind-blowing and definitely not for outside use.

For some reason, a mic…

The speaker does have a built-in microphone, but it isn’t very useful. That is because there is no voice assistant functionality built into the speaker. So no Alexa, Google, or Siri support.

It is really only there for emergency uses, like answering a call whilst listening to music at home when you’re far away from the phone. Likewise, it doesn’t have any noise-canceling, so unless it’s quiet, it won’t work well anyway.

When it does work, though, it sounds decent enough, and we had no complaints from the receiving end. 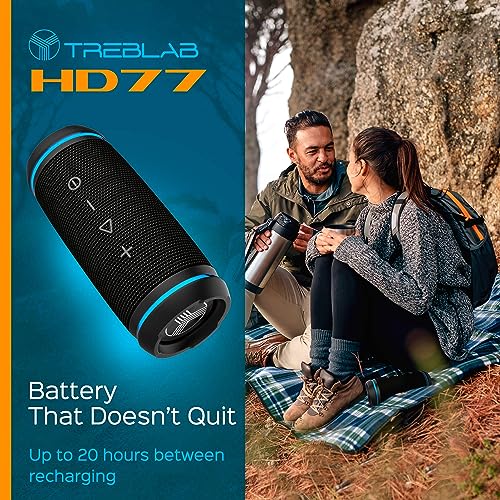 Setting up Bluetooth is easy. Just switch it on and pair it with whatever device you want. Bluetooth 4.2 offers smooth and quick pairing, while also providing a decent connectivity range. You have up to 33-feet before you experience some issues. We gave it a test around the backyard and had no connectivity issues whilst working in the garden.

Going wired is also simple. The auxiliary port is found underneath the speaker behind a rubber seal. There isn’t a compartment to store an audio cable, so you’ll have to carry it around separately.

Inside the HD77 is a large 5200mAh battery, which can play up to 12 hours of music before needing a refill. That said, our test was at half the volume, so you might get less playtime at very high volumes.

Charging up the speaker from 0% took four hours, which is a little slow. It also uses micro-USB, which is outdated and a bit of a drag. But that’s more of a nitpick considering the price.

At its price, it is loud and durable, which makes it a great option. It has a great sound that isn’t bass-forward, allowing you to really crank up the volume without distorting the sound. It has water resistance but isn’t waterproof, so it can survive outside with you for the most part. 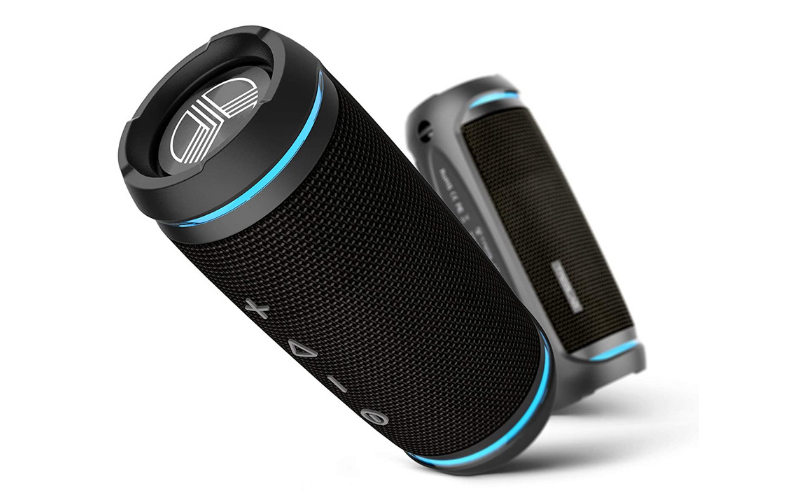 At this price, there aren’t many great speakers to compare it with, especially its 25W speaker setup. The UE Wonderboom 2 comes to mind. It’s similar in cost but is smaller and doesn’t nearly get as loud. It has two 8.5 Watt speakers, culminating in 17W. The UE does sound fuller and is waterproof. It even floats! 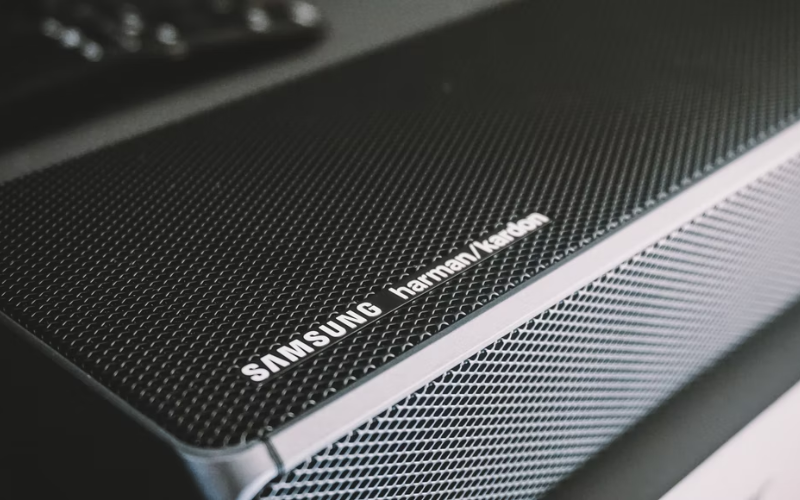 How To Reset Samsung Soundbar? 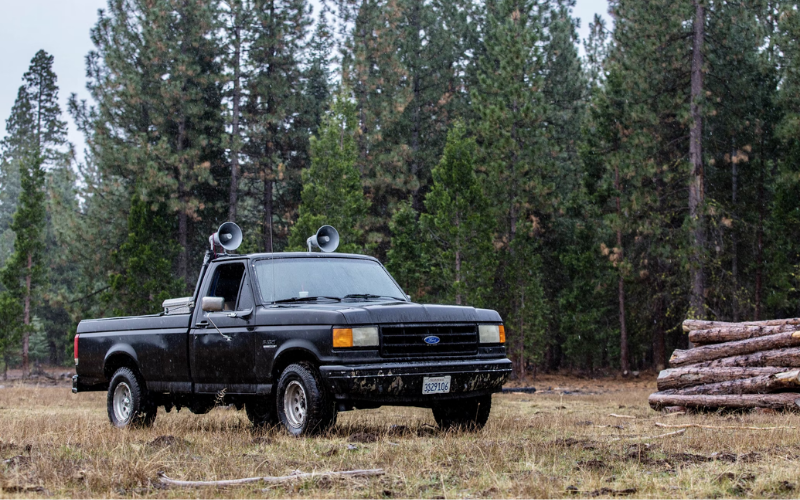 How to Install Speakers on a Truck Bed? 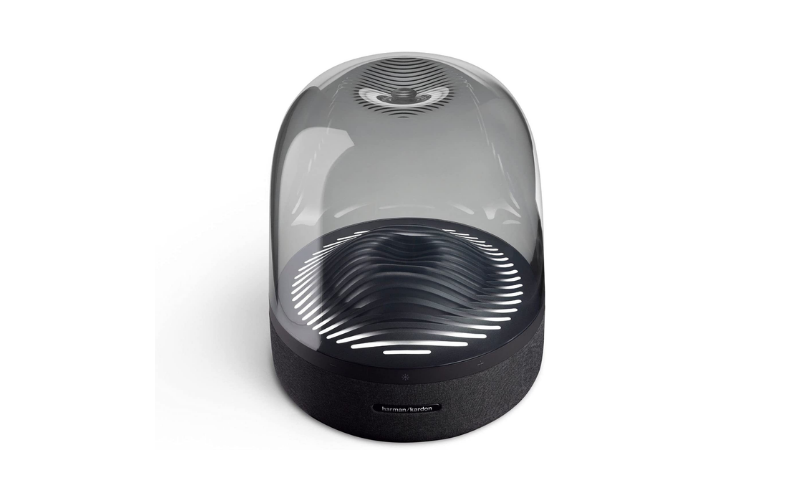