The turntable began to disappear sometime around 1989. Of course, most of them weren’t turntables as we know them today. Many were scratchy old record players or gramophones with scratchy needles.

Technology is not always better…

First, Sony and then others stopped pressing vinyl records as people turned towards more transportable music options. The digital age was arriving. Not many seemed to notice, and we were all carried away by the emerging technology at our fingertips.

In 2007 though, they started their comeback as vinyl returned. We woke up and finally realized just what we had been missing in sound. Somehow the sound of digital reproductions and recordings just weren’t as good. Since then, they are now back in a big way and still increasing in popularity.

Why do you ask?

Probably because we realized how sterile the MP3 sound could be, it might be convenient; you might be able to carry it around in your pocket. But sound-wise, it is not comparable to vinyl. The CDs were similar. Although there was a higher quality over the MP3, the individual nuances of vinyl could not be captured.

Many DJs, though, persevered, and they too now have seen a surge in vinyl use. Today’s modern high-tech breed of DJ often uses a controller with a laptop. But for a serious DJ, a turntable is still a must and something you simply have to have.

It can cost a lot of money to get a professional turntable. So, in this Stanton ST.150 MKII Turntable review, we will look at a turntable that isn’t going to require a mortgage and see if it measures up.

But before we do, who is Stanton?

Stanton Magnetics was founded by Walter Stanton in 1946. Originally they were involved in manufacturing audio equipment for consumer use. But as more professional products began to be required, they focused much of their energy on this developing market. Their turntables have become recognized as some of the best available.

They are part of the Stanton Group, and as of now, are owned by Gibson guitars, although why we don’t know. Nevertheless, despite Gibson’s involvement, Stanton continues to produce quality equipment. Some of these designs are for professional DJs, and turntables are one of their product lines.

We are going to take a look at one of their offerings, the Stanton ST.150 MKII Turntable…

The competition in this marketplace is more fierce than might be imagined. Audio-Technica is one of the most renowned manufacturers for the DJ. But with two of the most recognized manufacturers, Technics and Vestax, ceasing production of DJ turntables, there is a hole in the market. Stanton is in there, pitching with the rest.

But can Stanton fill that gap? 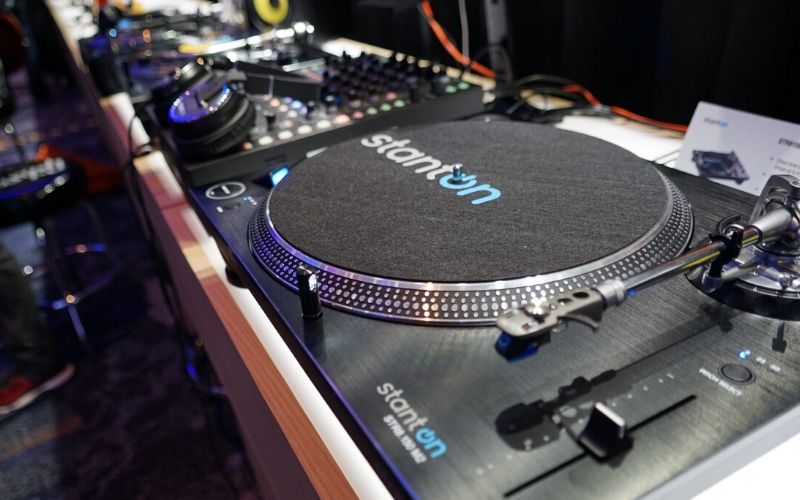 This is a heavy-duty turntable aimed at the DJ business. It carries many of the features that a pro or amateur DJ will need. But Stanton has been quite clever, and they have designed it so it could also be used at home.

As we shall see, there are many technological advancements included in this turntable that enhance its position in the market, not least being the near-silent motor. We shall take a look at that as we proceed. But it isn’t the only exceptional quality that this turntable possesses.

In our review of the Stanton ST.150 MKII Turntable, it is very evident when you first see this model that it is designed to be ready to go to work. It has a very heavy-duty build weighing 28 pounds. The base is made of aluminum and has a low resonance.

It has rubber shock-absorbing feet that soak up any unwanted vibrations or other noises. These can be adjusted to the height you want. The platter is made from 332mm die-cast aluminum, which provides a stable base, and it has a slipmat. The brushed aluminum top adds a touch of simple design that does a lot to enhance the look. 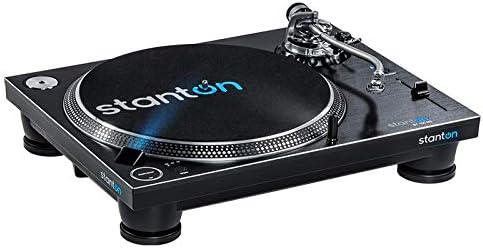 We earlier mentioned one of the features of this turntable, the near-silent motor. It is a Direct Drive, three-phase, 16 pole brushless DC motor with a very powerful 4.5kg of torque.

It has a fairly standard design ‘S’ shaped curved tonearm. Also made from aluminum, it is statically balanced with a detachable headshell. It includes a Stanton Trackmaster V.3 Cartridge. The tonearm has very fine height adjustments and an anti-skate device. It has a target light to allow the correct placement of the stylus in the dark, which is removable if necessary.

On the rear, there are RCA outputs for Phono or Line connections and a switch to move between those operations. There is also the brake control, the mains socket and an off and on rocker switch. It also has a built-in preamp.

A delight for a pro or semi-pro…

There is no hard glass or plastic turntable dust cover. That is not a surprise and is the norm with DJ equipment. Instead, it comes with a covering cloth. You will have access to the Deckadance DVS software.

It is designed to more than meet the exacting demands of the pro DJ and is going to delight the semi-pro and amateur. But as we have already said, there is a real quality of the features. What is built-in to this turntable also makes it suitable for the home.

If we are to look to find something that might have been omitted from the build, we can only think of one thing. We are not including the dust cover because, as we said, DJ turntables don’t usually have them. The only thing we can see is the absence of a USB connection. That would have allowed you to transfer precious recordings to digital if you needed to.

It is very well-made, as is obvious from the first impression you get. It has a weighted feel that encourages confidence in its performance. So it should, it has an excellent build quality. As most things are these days, though, this turntable is made in China.

The design of this turntable has a couple of notable features. Its construction is such that it will deliver an excellent signal quality. It is built and set up to reduce resonance and feedback and to deliver crystal clear reproduction.

The cartridge shell can be easily removed. It comes with a Stanton cartridge, but should you choose to replace it, this is easy to do. As we have already said, this is not really a consumer turntable, and its design lends itself more to the DJ. 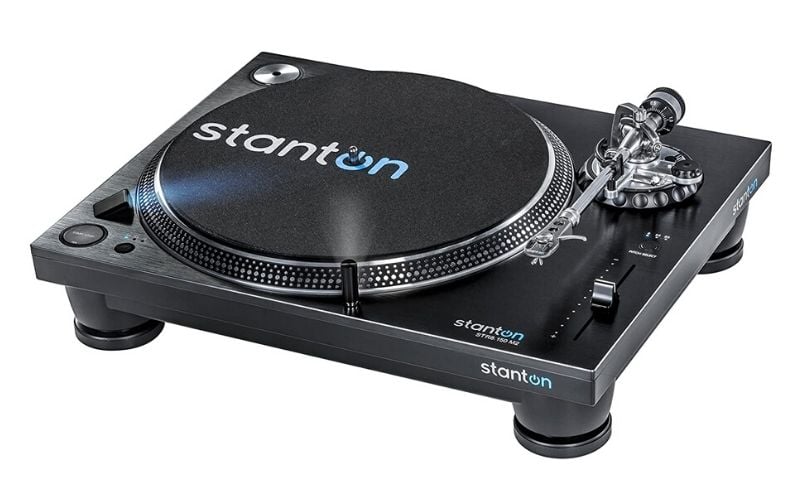 As an example, it can be used with another turntable and a mixing board. It, therefore, handles short bursts of music with changes very efficiently. It isn’t really designed to play an album from start to finish. Of course, it can do that, but that isn’t its prime role.

Everything about this turntable has been designed to get the best performance possible.

Some of the features included don’t lend themselves to consumer use, though. It is fully manual and therefore has no automatic start or return. It takes some attention if you are using it at home and cannot be left to play and then turn itself off.

The DJ, though, will prefer its manual status.

The pitch lock control is also another added feature that we briefly mentioned. Sometimes you will need to adjust the pitch. Then once having got that right, it will need to be locked into position so that it cannot accidentally be changed.

As you might imagine, the Stanton ST.150 MKII controls are functional. On the top panel, there is an On/Off button and speed control. There are also the pitch selection and set options, as well as the pitch slider and lock.

The buttons and controls are placed well and are easy to see. There is a reasonable amount of space between them. The pitch controls are all located in one area, which is also a good design point.

Up or down with ease… Stanton ST.150 MKII Turntable Review

To allow you to place the arm accurately on the vinyl, there is a lever that will raise and lower the tonearm. The tonearm, of course, does need to be positioned in the right place before it is lowered. You will also use this to lift the tonearm when the track or the side of the album is finished. When not in use, it will lock safely back into its rest position.

The controls are well-made and have a positive feeling about them. The lack of any plastic in the manufacture adds to the security of its operation.

Still, Got You Spinning?

Earlier on, we mentioned that with Technics and Vetsax withdrawing from the manufacture of DJ-suitable turntables, there is a gap in the industry. Audio Technica, as we said, is still there. But could Stanton be able to at least partly fill the hole left at this level and price point?

It is not the top, high-level design we are looking at. But those with a reasonable price point that still offer great performance. No easy task.Let us first take a look and remind ourselves of where we think some people might think it could have been improved a little.

One area is that there is no hard plastic dust cover. A cloth cover is provided, but that is not going to look so attractive in the home. We must remember, though, that the design priorities are not aimed solely at the consumer but at the DJ.

On DJ turntables, dust covers are rarely provided, and a cloth cover is a norm. However, if this turntable is for you, then there is a dust cover available as an optional extra. Stanton has covered the bases for both consumer and DJ use.

The issue that must be raised againis the absence of a USB port. This would have allowed you to make copies of some of the vinyl that needed preserving for whatever reason. ]

This facility might have been used by the DJ but is more likely to be utilized by the home consumer. There are some DJ tables with USB and some without, but we can agree that might have been an asset to this turntable.

Some might argue they prefer a belt drive instead of a direct-drive motor. Or possibly that they prefer an automatic rather than manual turntable. But if so perhaps they shouldn’t be considering this turntable in the first place.

Really that is about all that we can identify on a turntable at this level. The positives far outweigh the negatives in our view. Let us just remind ourselves of some of them.

Beauty in design and durability…

The all-steel construction means it is durable but also stable during use. A very tough build for the working DJ. But also a design that has an acceptable aesthetic for the consumer at home. It has a high-torque motor that is direct drive.

It comes with a quality Stanton cartridge. Plenty of user-friendly controls, including three speeds, pitch control, and lock. There is no need to list the rest of them all again.

In our view, this is an excellent turntable that sits neatly either for the working DJ or for home use. We asked the question earlier, could it fill the gap and challenge the likes of Audio-Technica? The answer has to be, yes, it does, both in design and performance.

And at the price point is a very good buy indeed. 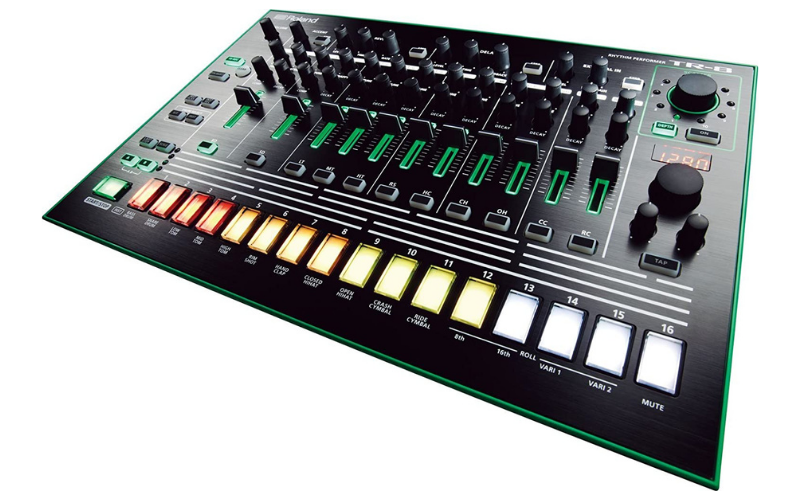 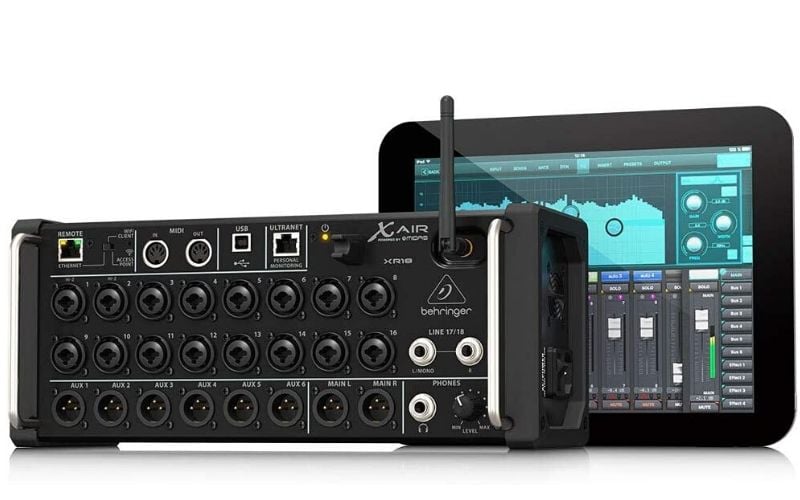 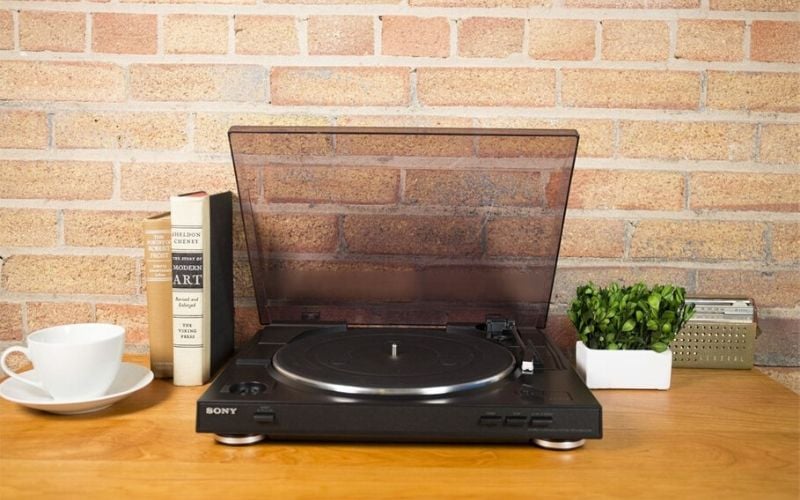