Fancy a bit of retro-cool?

If you do and you’re in the market for an inexpensive pair of studio headphones, these might be the answer.

The Sony MDR-7506 Professional Large Diaphragm Headphones have been a constant presence in recording studios around the world for a long time. The fact is that a product doesn’t survive with this level of popularity and longevity without reason.

So, let’s get this Sony MDR-7506 review underway and see what all the fuss is about. 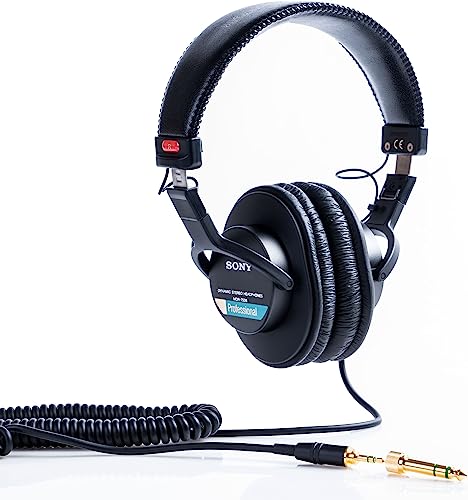 Sony MDR-7506 has shunned the idea of doing anything whatsoever to bring even a hint of modern design anywhere near these headphones. Perhaps the good people of Sony land think that if they change the style bad things will happen. Maybe the poor MDR7506 headphones will have an allergic reaction? Maybe they’ll have a mental breakdown or spontaneously combust?

Whatever the reason for Sony sticking with the same kind of headphones styling for close to 40 years, we’re pleased. 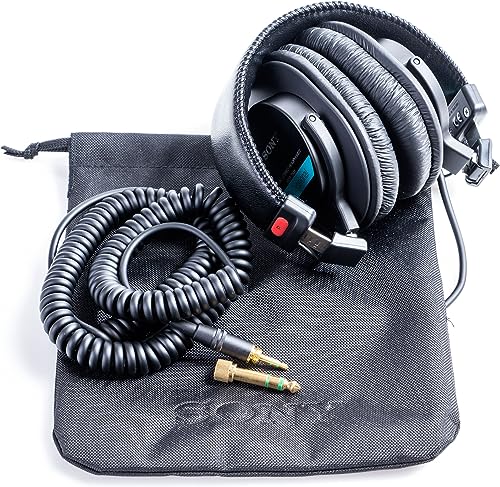 They’re so not cool that they kind of are…

These may just be the ultimate anti-fashion statement. These are for people who take their music seriously, and they don’t care what people think. Though they do care really!

Let’s hope the hipsters don’t jump on the bandwagon and ruin it for us all.

Sony MDR headphones have always been about studio monitoring. It’s what they’ve been designed for. This is something we’ll look at more closely a little later. But could they be used outside or for your daily commute?

They’re not too bulky and are subtle enough not to make you feel self-conscious or stand out. They’ll nicely slip under most people’s radar. Except, of course, for those people who can appreciate them for what they are. Those people who appreciate just how important music is to you.

The build quality doesn’t look to be too good at first glance. The Sony MDR-7506 haven’t been overdone with plastic, but they look like they might be a little fragile. However, despite their looks, these are much more rugged, and hard-wearing than they’re appearance might suggest.

These are headphones that have proved, with time, that they’ll take anything you can throw at them.

These are built to last…

But the Sony MDR-7506 headphone aren’t perfect, and they have their weaknesses.

The hinges are an obvious potential point of failure. They’re made from plastic, and although they’re reasonably strong, like a lot of headphones at this price point, it’s an obvious weak spot. 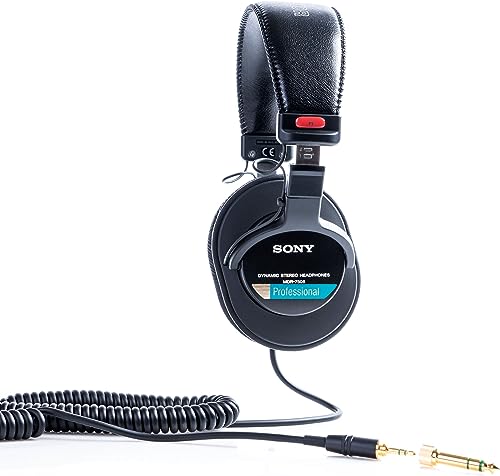 Another potential weak spot is the fact that the cable is integrated into the headphones. The cable is a good length and is well insulated, but like all cables, it’s likely to break eventually. Unfortunately, if and when this happens, it’s going to take more than a simple plug-in cable replacement to get you up and running.

Finally, the case they come in is flimsy. It’s going to do very little to protect them. If the headphones always live in your house or studio this is a non-issue. But, if you want to frequently transport them around, we’d advise you not to rely too heavily on the case’s protective qualities.

To a large extent, this is helped by the fact that they weigh just 230gms. That’s really not a lot for a pair of reference headphones. In fact, compared to a lot of similar priced and similar quality headphones, they weigh about the same as a fasting supermodel.

The Sony MDR-7506 headphones have a good-sized headband. They are a good fit for most sizes of head. One thing we really like about these headphones is that they don’t feel too tight and don’t put too much pressure on your ears or head. 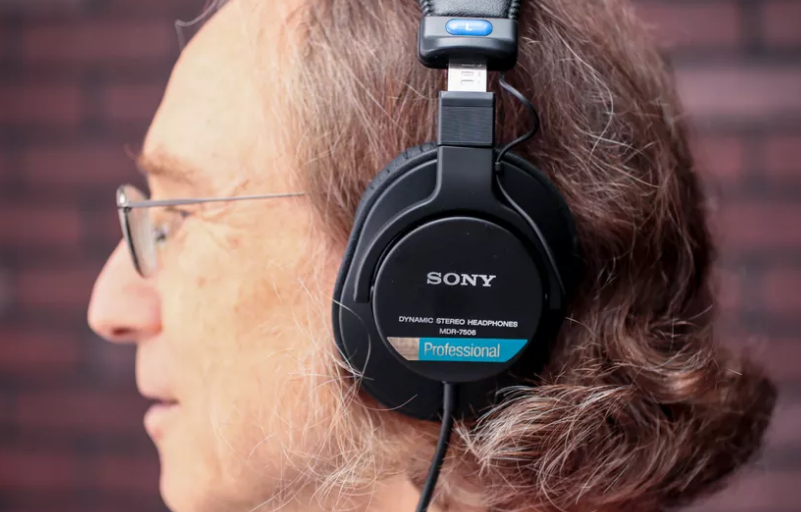 The padding around the ears also helps to keep you feeling comfortable and fresh. They’re well-padded but not too much. Sony has played a clever minimalist game of just providing enough padding to get the job done.

The level of padding is also just enough to provide a good level of isolation to outside noises and distractions.

Since these are closed-ear headphones, it’s unavoidable that during a long session, your ears are likely to get a little warm. However, they’re still likely to feel more comfortable than a lot of other makes and brands.

All in all, these are excellent tool-like headphones that are really hard to beat for comfort.

The Sony MDR-7506 headphones are wired and have no Bluetooth or any other kind of modern-day connectivity. These are unashamedly built for reference listening, and they focus purely on this and nothing else.

The limited features they do have to include the attached 1.8 m coiled cable that will stretch out fully to 3 m. It’s a good quality cable and is actually perfect for a studio environment. It needs to be since the cable can’t be detached, so as we’ve already mentioned, replacing it is going to be a bit tricky.

You do get a 3.5 mm to ¼” adaptor included with the headphone, which is always a useful inclusion. You also get a soft carrying case. Furthermore, since the Sony MDR-7506 can easily be folded, you can store these in a relatively small space.

The headphones aren’t feature-rich and have no controls what so ever.

This isn’t the game with these headphones…

Never the less, despite the lack of controls, we still think they’re still a great option to take out of the house and use for more general listening purposes. Certainly, their quality is more than good enough, which we’ll take a look at very shortly.

If you want to use these for a walk in the park or for your daily commute, then we think that they’ll work just fine. You should do it. After all, we’ve established that they’ll be comfortable to wear and that you won’t look like a crazy person, so why not? 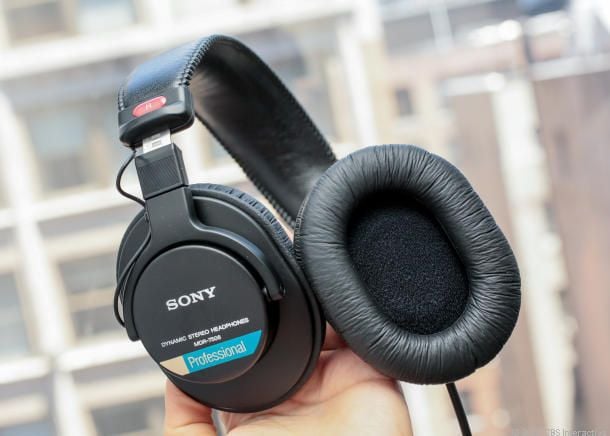 You won’t be able to control the volume or pause, play or skip your music from your headset, but so what? Since most of you will have your phone glued into your hands anyway, no problem, right?

What’s more, since these are wired, it’s one less battery problem to worry about, and one less potential Bluetooth streaming problem as well. Sometimes there’s something to be said for the old-school ways.

Is that enough to inspire you to get yourself into a bit of retro cool?

If they’ve not got this right, then you’ve just wasted the last few minutes of reading.

Don’t worry, breathe easy, of course, they’ve got it right.

For studio referencing or any critical kind of listening, they sound great. Given their really affordable price, they sound amazing. Best of all, we think that although they might be primarily studio headphones, they still sound great when you want to use them for listening across a broad range of musical genres.

On the whole, they sound neutral but not completely so.

The bass is clear and conforms very closely to the gold standard of neutrality. There’s no sensation of anything that has been added. There’s no extra punch or oomph to color the mix.

Of course, this is very much against the flow of general-purpose modern headphones that emphasize and, in our opinion, over color the original mix. However, it’s a popular signature sound that the majority of modern music listeners seem to prefer.

If this is the kind of sound you like, and you’re considering the Sony headphones for use outside of the studio, you’re likely to be disappointed.

Tight but not too tight…

The mids and the trebles are a slightly different story to the bass. They are still relatively neutral, but don’t hug the original signal so tightly.

The mids are more emphasized. We definitely have no complaints about them in any way being muddy or absent, though if anything, they feel a little too prominent in the mix. This is most obvious in vocal passages where they can sound too forward.

The highs are bright and have no problems cutting through the mix. They, like the mids, sound accentuated, though not quite to the same extent as the mids.


Not quite as flat as a pancake…

All in all, although the Sony MDR-7506 headphones don’t replicate a completely neutral sound, but they come pretty close, and for the price, they’re impressive. There’s no doubt that to get better sounding studio headphones, and you can pay a lot more money for very little perceived improvement.

These are great quality and great sounding reference headphones for the money. We also think that they make excellent headphones for general listening. However, we do appreciate that the lack of bass, and more accurate sound signature, does not give the warmth, excitement, and modern sound signature that so many casual listeners now seem to crave.

These days there are literally endless choices of quality affordable headphones, so if these Sony’s haven’t grabbed you for whatever reason, take a look at some of our other in-depth reviews.

You could start by checking out our reviews of the Best Sony Headphones or the Best Studio Headphones for Home Recording. Both of which feature the excellent MDR-7506.

The Sony MDR-7506 might be showing their age, but they still have a place in modern studios.

If you’re looking for an inexpensive set of reference headphones, you’ll have a long search on your hands to find anything as good as these for the price. If you can embrace the retro-looks, you’ll get yourself a pair of great-sounding headphones for not a lot of money.

Even if you don’t have a studio and don’t do any recording, we’re happy to recommend the Sony MDR-7506 for general listening. These will help you pick out the fine details and nuance of the music you’re listening to and give you loads of enjoyment.

They’re a great set of headphones. 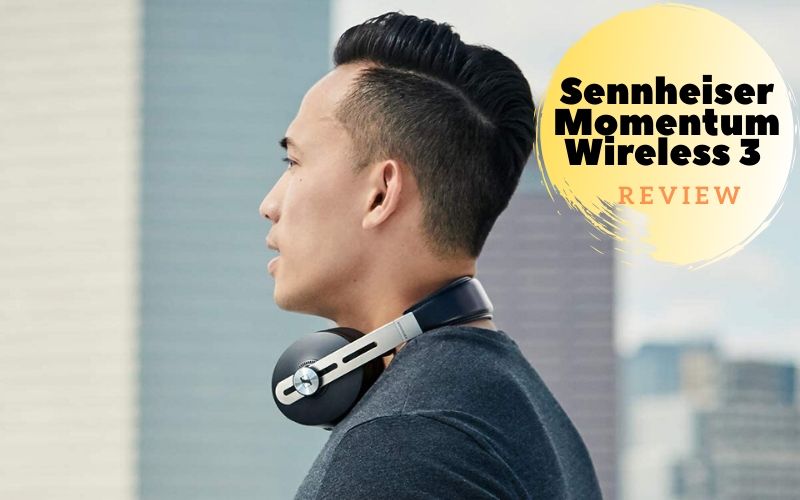 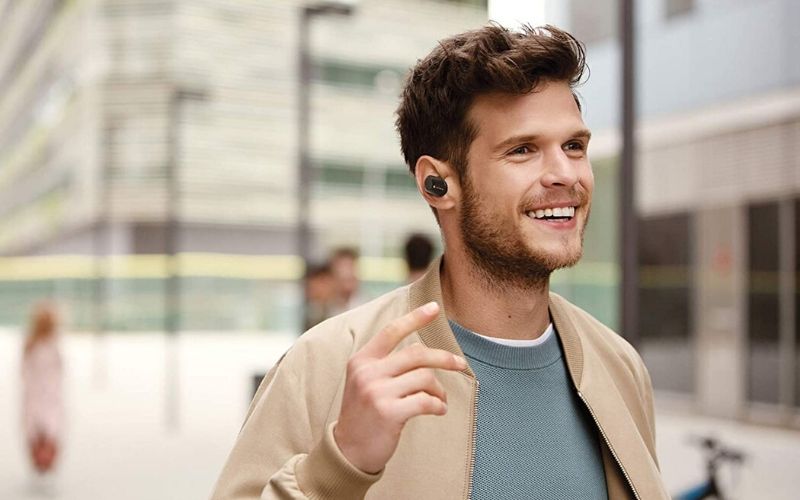