Technology advances at a ferocious rate. Sometimes it is too fast for us to keep up with everything. The advent of the smartphone allowed anyone to document and record anything. And then, as social media expanded, it was possible to share it with the world.

Some do it for fun, but there are professional people out there now recording video using smartphones. But to do it properly, you need quality audio. Phones have their own audio, but it has to be said, it is not the best option in most cases.

That is where the microphone companies came in. They saw this potential very early, and we now have a range of microphones that work specifically in this area. By attaching these mics to smartphones or tablets, the interviews and soundtracks suddenly got better.

Of course, Shure got themselves into this market, as we shall see in this Shure MV88 Review. If you are in music, you will know them, unless you’ve been on Mars for the last 50 years. But if you are only vaguely familiar with the brand, let’s take a quick look…

Established in 1925 as a manufacturer of spare parts for radios, they have grown somewhat. Today, they must be considered one of the best known microphone manufacturers in the world.

They cover the complete range from top-quality studio mics to microphones for live performances. And now, the sort of mic we will look at here. Designed for a specific purpose but capable of so much more. A Shure trait in most mics they design and build.

From the stage to the studio…

And in many other places, you will see the Shure logo. They make some of the best high performance microphones for any job. Ask any live sound engineer if they need an SM58 or SM57, and they will say yes. You won’t find many recording studios without a collection of Shure mics in them.

Just about every top performer has gone on stage with one at one time or another. They are at the top of the pile, and now, you can have that quality for work yourself. Let’s take a brief look… 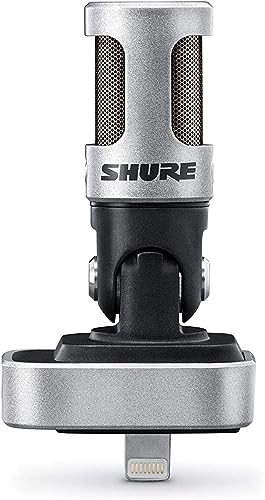 This is a stereo condenser mic designed to connect straight to your iOS device. It may resemble many other mics created for the same purpose. But it offers much more than most.

A great sound and real versatility have made this mic a must-have for some. Furthermore, it is one of the most popular smartphone microphones you will find.

More than most we say?

We mentioned versatility, and that is what you have here. The sound is clear and sharp. You might be recording a conversation or conducting an interview. It could be in a very noisy environment. That means you are likely to be working very close to the mic. Wherever you are, the voice reproduction will be exceptional.

But you could be on your own. What about if you are working on a new song or a musical idea? That will work as well because the multiple capsule design gives you a range of recording options. Configurations then are flexible to suit whatever it is you happen to be doing.

This mic is small and easy to carry around with you. No need for large equipment that may be cumbersome or heavy. The mic might be small, but it still has all you need to capture great recordings if you are on the move. It’s one of the most versatile compact microphones available.

All very impressive so far, so let’s look a little closer… 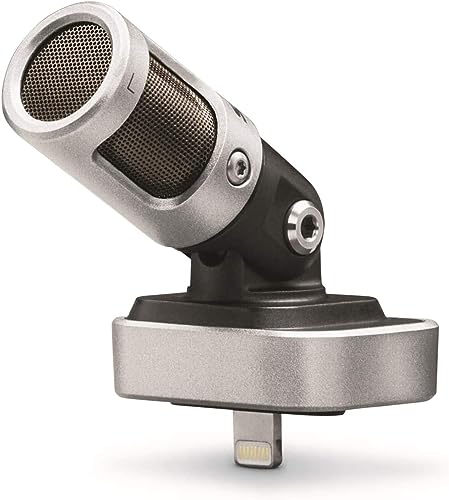 Anyone who knows anything about Shure microphones will be aware of the build quality. Shure has been making microphones for years that have been trampled on and thrown around. They’ve been stamped on, given the ‘Roger Daltrey treatment’, and even had a truck run over them.

They still come back for more. It is in the Shure DNA. If you are expecting this mic will have the same tough build, you won’t be disappointed. As a result, they are one of the most durable microphones on the market.

This mic has a rugged all-metal body. Built to be used outdoors and occasionally dropped or knocked over. It won’t matter. It has a Lightning Connector, and even that is a lot stronger than you’d expect.

For those that might be using this mic for fieldwork, it is perfect. There will be times when you need to react quickly. At just 1.4 by 2.6 inches and weighing only 1.43 ounces, it is very portable and built for the job.

It is also flexible, and you can rotate, flip, or tilt the mic up to 90 degrees. The rugged hinge allows you to create the right position relative to your sound source.

Working outside has its environmental problems. Wind, rain, and anything else could potentially interfere. This mic has been fitted with a foam windscreen. It is attached to the mic but can be removed if you wish.

Now we are not going to say that this is the answer to the elements. It is a basic windscreen and only offers a basic level of protection. If you are constantly using this mic in windy conditions, then a better quality windshield might be best. That said, the build quality is what you might expect from a Shure mic. So, no complaints here. 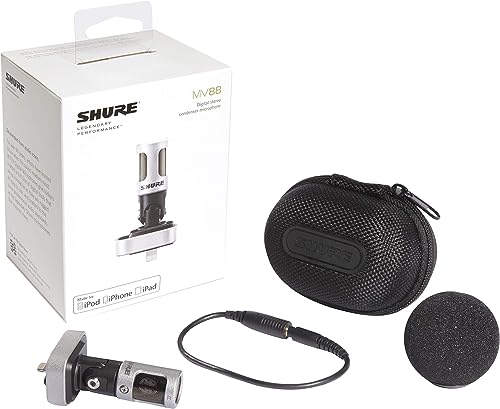 This mic has options. It is basically a Cardioid mic, but it has the option to convert to other polar patterns. We will be looking at that a bit closer later when we consider the app that comes with the mic.

It is a condenser mic with a frequency range of 20Hz-20kHz, but it does not require Phantom Power. Your iOS device will power it automatically. There is no activation required.

By now, you will have noticed that we only referred to iOS. This particular mic is not compatible with Android smartphones or tablets. It is an Apple-certified mic and is compatible with all iOS devices that are fitted with a Lightning connector. Therefore, if you’re looking for the best apple compatible microphone, look no further.

We have spoken already about variety. The Shure MV88 can be used just about anywhere and still produce great results. Likewise, we mentioned its flexibility. This mic is going to be at home in a wide variety of situations. Of course, it is going to be great for interviewing either individuals or in small groups.

It will work for gathering news and making comments, podcasting, or loggers adding sound to videos. It will even work for musicians who might want to quickly put down a theme before they forget it.

We are not saying you will get studio-quality vocals for music. But it will serve its purpose to jog your memory at a later date. However, when it comes to what this mic is designed to do, recording sound in partnership with a device, the results are going to be excellent. 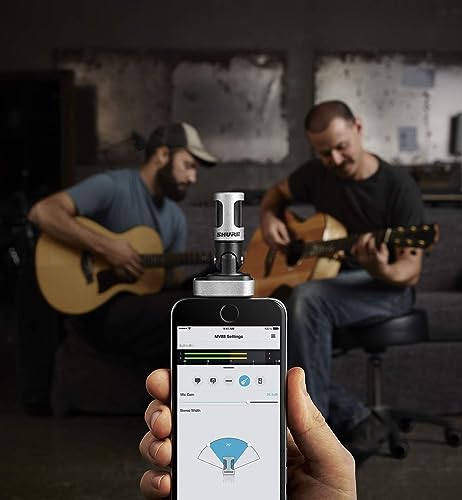 The performance of this mic is inextricably linked with the two free apps that accompany it. They are ShurePlus MOTIV Audio and ShurePlus MOTIV Video. These can be downloaded directly from the Apple Store after purchase.

This is a Cardioid pattern mic, but the ShurePlus MOTIV app gives you access to other options. These may be of benefit in varying recording conditions.

Besides the mono Cardioid, there is also a mono bidirectional pattern and raw mid-side options. Furthermore, the app allows you to utilize a full 24-bit/48kHz resolution.

Using the app, you can set up your mic and then transfer those settings to another app. This includes any apps that you use for video creation.

From the ShurePlus MOTIV app, you can gain access to the complete built-in DSP engine. You can control performance and editing functions like adjusting the gain and using the compressor and limiter. You are also able to adjust the frequency response using the graphic equalizer.

Using the app’s built-in compressor, you can prevent clipping if you have set the gain too high. Although, we should point out that the SPL of this mic is 120dB. If you exceed that, it is not possible to prevent any subsequent clipping that occurs. But 120dB is quite loud, so we think that an unlikely scenario considering how you will be using it. 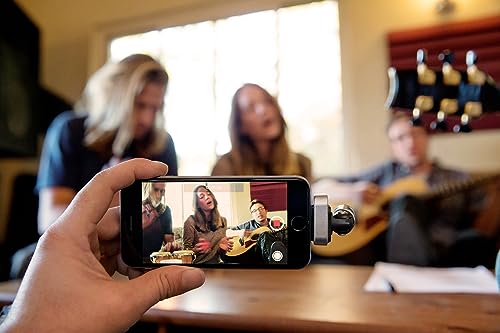 With a Shure mic, you tend not to get too much in the way of extras. Most of the time, you don’t need any. This mic, however, does present you with some.

We have mentioned the two apps which are of prime importance. But you also get a nice carrying case with a zipper and headphone monitor cable. The foam windscreen we have already mentioned.

In our view, it is set at a decent price point given the quality of the build and what is included. However, some may think it is a little expensive.

Or how about our comprehensive Audio-Technica AT2005USB Review, our Shure SM58 Review, our Samson Meteor Microphone Review, our Blue Yeti Nano Review, and our Sennheiser E906 Review for more awesome microphones currently on the market.

We are tempted just to say this is a Shure mic. Enough said. But in many ways, that might not do it justice. It has all the attributes of a typical Shure mic, but it has more than that. And for the uses for which it was designed, it goes a couple of steps further.

What we have with this mic is a workhorse that can be applied in a variety of situations. We say “workhorse” because it can work in many different ways. And in any of those situations, it will provide you with quality results. 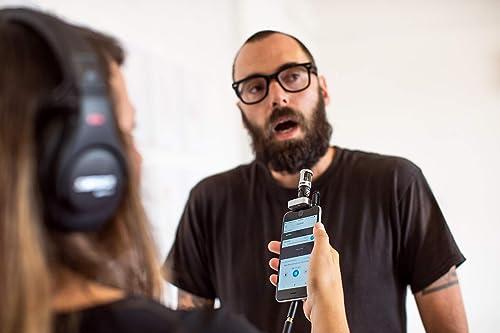 It is packed with some great features that make it stand out from the crowd. The performance with those linked apps and what can be achieved takes it to another level. If you are doing interviews, outside broadcasts, filling your Vlog, producing podcasts, or producing videos, this is a must-have mic. Yet another great addition to the Shure catalog.

Until next time, feel free to speak up. 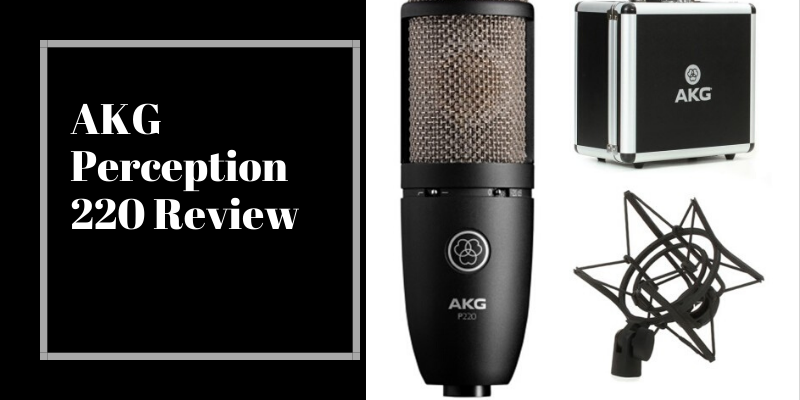 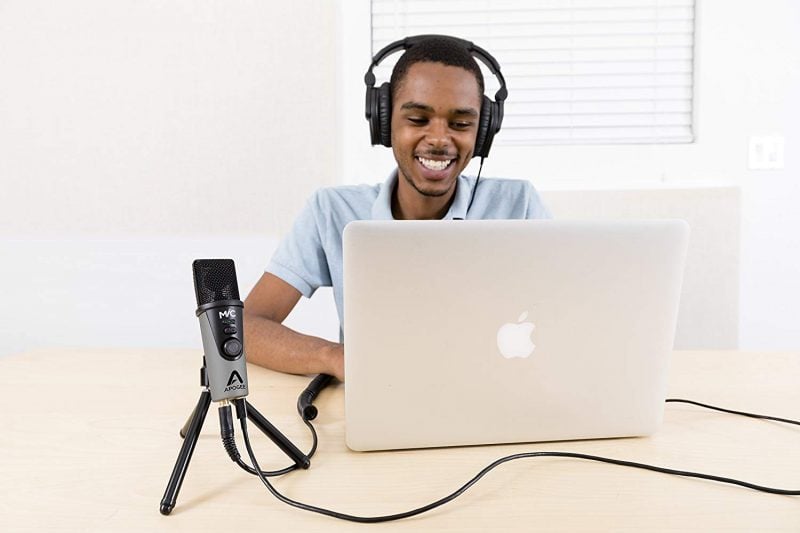 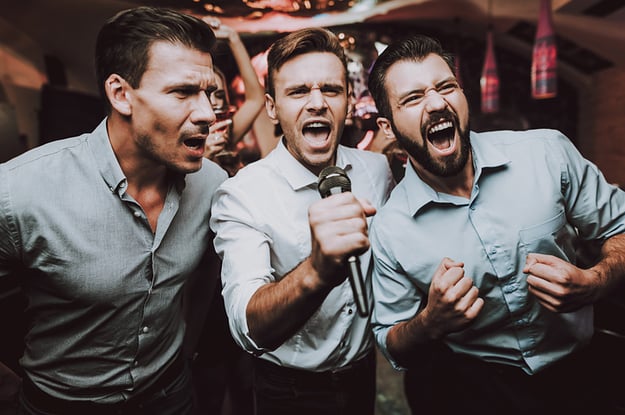