Everyone knows about saxophones. And sure, they’re great instruments, don’t get me wrong. But they’re also a little bit outdated. I mean, my grandma played the saxophone, for Pete’s sake!

And while they come in different sizes, from tiny soprano down to the massive contrabass saxophone, they’ve had pretty much the same design for nearly 200 years!

It’s time to change all that…

Enter the sax-a-boom. The newest, rarest, and most original modifications of the saxophone in centuries. This instrument, which surprisingly began its life as a children’s toy, is now a highly sought-after collector’s item. If you can get your hands on a sax-a-boom, you’ve got connections.

The History of the Sax-A-Boom 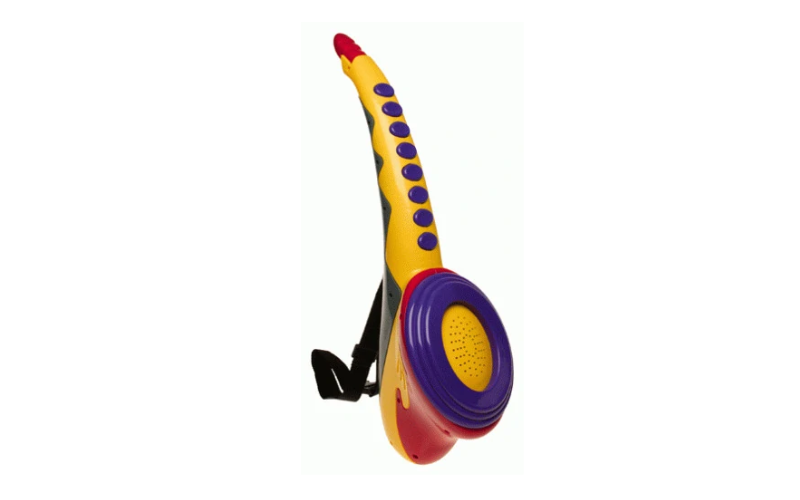 This fine instrument was conceived as a toy for kids. Shocking, I know. Well, guns started out as fireworks, so not everything goes as planned. The plastic-bodied toy sax-like machine was originally produced by a company called DSI Electronics.

This company licensed the Kawasaki brand name to put it onto their toy cars. Then, they decided to sell instruments under this name, too.

It was part of a range of toy electronic instruments called the Kawasaki Rockers Band. So, people often refer to this instrument as the Kawasaki Sax-A-Boom.

The toy was manufactured in the late 1990s and retailed for about $20 ($19.99, probably!). It was then fairly quickly discontinued in the early 2000s. For this reason, there weren’t many made, and that makes finding a sax-a-boom today something like finding a needle in a haystack.

Why is the Sax-A-Boom Famous?

This is a great question. How did a children’s toy electronic instrument that used to sell for $20 end up being found for sale on eBay for up to $300? The answer is one man – Jack Black.

This actor, comedian, musician, and all-around wild dude is the main reason for the current interest in the sax-a-boom. Black started using the Kawasaki sax-a-boom on stage with his band, Tenacious D.

This was back in the 90s, and he used the Kawasaki Rockers Band guitar as well. His celebrity, and let’s face it, his tireless enthusiasm, too, put this instrument in the spotlight. That was back in the late 90s and early 2000s, and then the focus on the instrument faded.

Talk Show host Jimmy Fallon surprised Black (or was it all carefully choreographed?) with a sax-a-boom during an interview and challenged him to play it. Jack Black, no stranger to the spotlight, took up the challenge then and there.

He immediately jumped to his feet and started playing the instrument. He then ran across the stage to start a kickin’ jam with the house band The Roots, which played out that episode of The Tonight Show.

Jack Black’s promotion of this instrument went, for lack of a better word, viral. Fans of Black and Tenacious D started trying to get their hands on the sax-a-boom any way they could.

First, people were just finding them in second-hand shops and stealing them from kids. But, eventually, things became big business. Soon you were able to find them for sale on eBay and other dealers of used equipment.

The only problem was that the price skyrocketed. Supply and demand, right? Some sax-a-booms were sold for as much as $300, 15 times their original price. Poor DSI Electronics – if only they’d hired Jack Black to give a celebrity endorsement from the very beginning.

If you’ve gone this far and you still don’t even understand what a sax-a-boom is, it’s time to clarify. As I’ve said, it’s a toy instrument meant for kids. It looks a fair bit like a saxophone made from bright, multi-colored plastic, but there are some big differences.

Let’s start with the buttons…

Where a normal sax has keys, the sax-a-boom has eight buttons on its neck. Of these buttons, seven control the sounds that come out. But, rather than keys that adjust the pitch of a woodwind instrument, these buttons play seven pre-recorded “cool saxophone licks.”

That’s right, it plays sax samples, and that’s all. The eighth button triggers a rhythm or beat to spice up your playing. Well, to be more accurate, the loops you play. Because you don’t have to play this instrument at all. And you don’t need to put the weird mouthpiece in your mouth.

The bell sports a 3-inch speaker, which plays the samples out of it, and it sounds pretty good, in all honesty. It has a built-in volume knob on the left side for when you want to crank it up, and a stop button that cuts off all music immediately.

You can also adjust the loop button so that the different licks play on a loop or cut off after they’re finished. The whole thing runs on three AA batteries which are installed through a back panel. 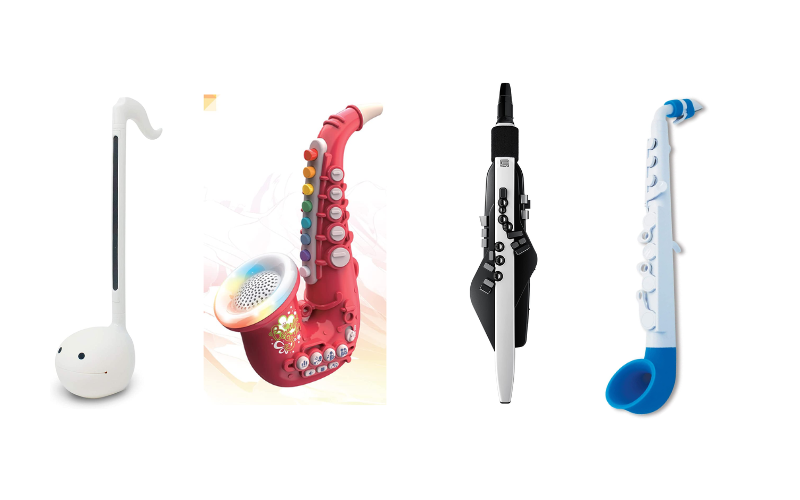 Can you still get a sax-a-boom? Ha, only if you’re incredibly lucky or well-connected. These toys are now collectors’ items, and, of course, they break over time. So, there are fewer and fewer every day.

However, there are some pretty cool saxophone simulation alternatives out there you can still easily get your paws on.

This is probably the most similar toy to the sax-a-boom. However, this kids’ toy plays ten nursery rhyme songs and ten popular kids’ songs, rather than booming licks.

Here is another pretty fun sax-shaped option. This is an instrument you do have to play; however, you don’t need to blow into it. Instead, the sound simply comes out and changes as you place your fingers on the playing surface.

This is technically a real sax. It is made out of plastic, however, and the design is very reduced. But you can still play it like a real saxophone. It costs less than $100, so it’s pretty easy on your wallet.

This is a synth that you also need to blow into. But your fingers can control the keys easily, and you can change it, so it sounds like a flute, trumpet, clarinet, sax, or whatever. Well, I guess you could also get a real saxophone if you’re really in a bind. Speaking of real saxophones…

The sax-a-boom is a musical instrument that, in the words of Jack Black, is “as rare as a Stradivarius.” And they’re getting rarer by the day since they’ve long been discontinued by DSI Electronics, the now-defunct manufacturer of the original toy.

It has been made famous, or perhaps infamous, by Jack Black of Tenacious D, so the chances you can get one are pretty slim. Luckily, there are a lot of other sax-like instruments out there, from kids’ toys to real high-quality synthesizers.

So, there’s still a chance you can pick up something that resembles the famed sax-a-boom, even if it’s a real saxophone.

Until next time, good luck searching, and let the music play. 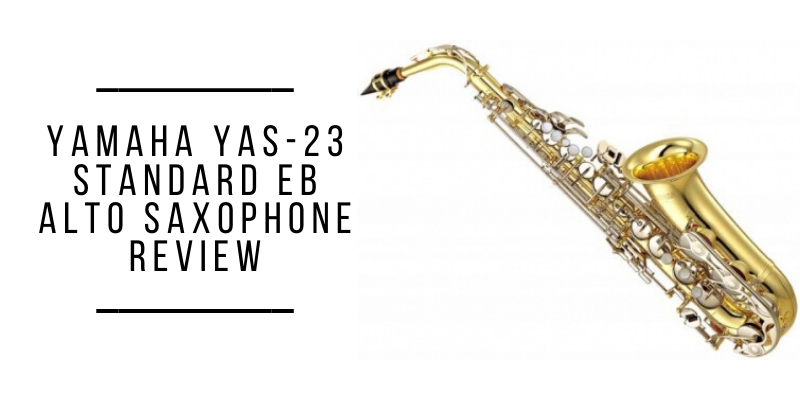 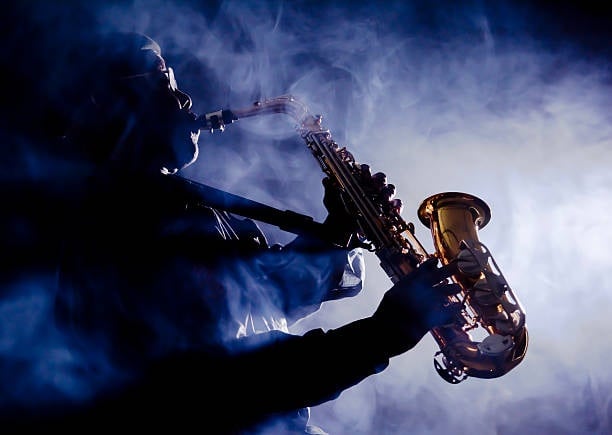 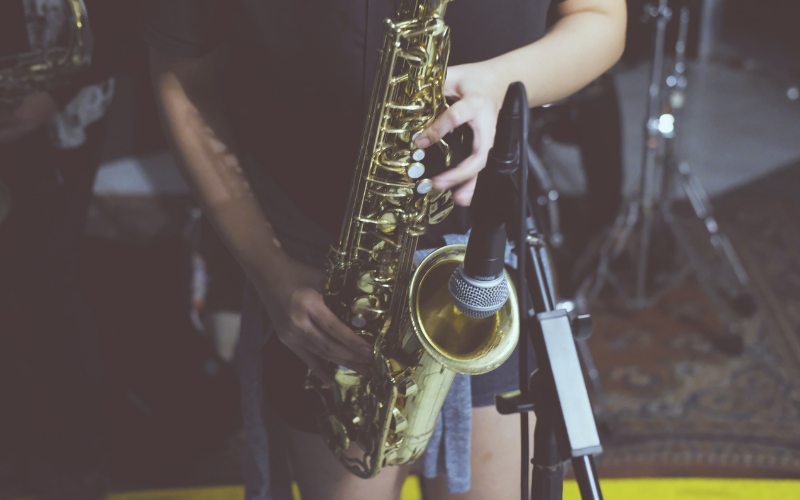 Is Saxophone Hard to Learn? Advice for Beginners