It seems to us that the development of amps and cabinets have broadly followed the developing design concepts and ideas of computers. And this Roland Micro Cube GX Review will provide an idea of how things have developed.

In the 60s, 70s, and the start of the 80s, IBM ruled the roost. Thought they were untouchable. Their computers were getting bigger and bigger until their 3080 series released in 1982, which often needed a water plant to cool it.

Others were making their computers smaller. IBM paid lip service to it. In 1987, just four years later, the 3080 series were finished as people went smaller. IBM paid the price for thinking ‘big is beautiful’. It wasn’t. Not humble enough to admit they made a mistake. Where are they now?

They got bigger and bigger. Some bands even took to the stage with dozens of Marshall 4 by 12s. Most of them were empty of speakers. Just for a ‘rock star’ look. Sad really.

Others were making their amps smaller and packed with sounds and effects. So small you could walk down the road with it in your hand. Some still thought big was beautiful. We can agree there are occasions when you need the power larger cabinets can provide. Not empty ones just for the look, though.

But now amps like the little Roland Micro Cube GX pack in enough sounds for quite a few scenarios. They have become the laptop of the music world. Everything is packed into something you can carry down the road to the coffee shop.

The laptop puts computing in our briefcases. Amps like the Roland Micro Cube GX put some great sounds at our fingertips wherever we need them.

But before we take a look at this tiny amp, we should remind ourselves of who Roland is…

There won’t be many that don’t know the name. Great and influential keyboards over 30 years. One of the best amps ever made in the Roland JC-120, and let’s not forget the TR808 and 909 drum machines. They influenced a whole new genre of new music.

And of course, one of their subsidiaries is Boss. Sound effects that have rocked the world and still do, as well as endless mixers and portable multi-track recorders. We could go on, but you get the picture.

One of the big players in the development of MIDI, today the Roland story just thunders on. They are one of the great contributors to music on the planet. Founded in 1972 in Osaka, Japan, they have grown to be one of the most influential manufacturers of musical equipment in the world.

The Cube range has sold well over two million combos since 1978. They are still going strong and are highly thought of. So, let’s take a look at one of the more recent models. 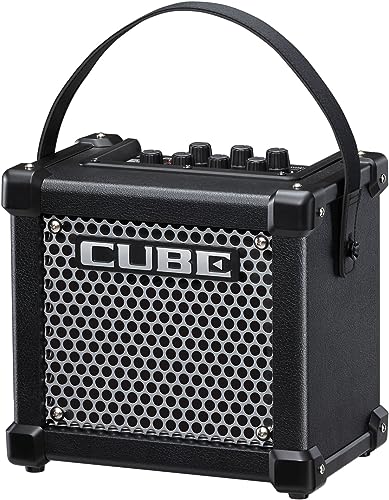 The Micro Cube from Roland is one of the best selling amps over the last ten years. That must make it one of the most popular of all the battery-powered amps. This version, the Cube GX, keeps the compact size and the big sound of its older cousins. But it adds in a few additions and some improvements.

In 2013 it was given an award as the best amp in its category at NAMM. Bringing a new functionality to the most popular small amp clinched that particular accolade.

It is still lightweight, but it is still capable of delivering a decent punch. It now has some new amp models and awesome, typically excellent Roland effects. And it has a few other surprises along the way.

Getting the best out of the tech…

The i-Cube Link ensures that the Cube GX embraces modern technology. Connecting to your favorite device opens up a whole world of new possibilities. We shall discuss that more later on.

You can take it anywhere, use it on the beach, in the garden at parties, or just set it up in the garage. And every time you plug it in, you get that Roland sound. And all in a battery-powered little box.

Versatility is the big plus with this little amp. And it carries with it a lot of tech, all under the bonnet waiting to be explored.

There is a philosophy that runs through everything produced by the Roland Corporation. Make it tough and ready to work. That can especially be seen with the Boss effects pedals. You can run them over with a truck, and they still work.

We don’t suggest you run over this amp with a truck, but it has a tough build. And it is ready for you to go to work.

It might only measure 9.72 by 8.94 by 6.77 inches and weighs 5.95 lbs. But it will be harder to find a more rugged little amp. The cabinet is made of ABS molded resin that is injection molded into its designed shape. Lightweight and tough.

It is a compact DSP guitar amp that has one five-inch speaker that generates three watts. Not much, you might think. Just try it. You will get a surprise.

It is quite a basic amp in some respects. One channel, one EQ band. But then you look a bit deeper and see what’s on board. We shall look at the sounds later.

Battery-powered if you wish…

It will operate on six AA batteries or AC power. The batteries will give you between twenty and twenty-five hours of playtime. Depending on the volume you use, of course.

It has a couple of other nice inclusions. There will not be any need to carry a guitar tuner with you. The Micro Cube GX has a built-in chromatic tuner. There is also a very useful memory function. This allows you to call up previously saved amp and effects settings you have saved for later use.

There are one ¼ inch and one ⅛ inch aux inputs and a ⅛ inch output. Those connections lead us nicely to the next section. 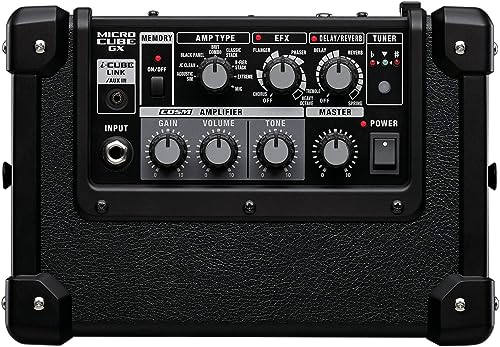 The ⅛ inch output is for your headphones. The aux input for your CD player or MP3. The rest of the controls are located on the top of the cabinet and are clearly labeled. There are two inputs, one for the instrument and the other for the i-Cube Link, which we shall discuss soon. Next to them is the on/off control for the built-in memory.

Completing the upper line of controls are the effects. There is a selection of amps and EFX, along with dedicated delay and reverb control. Next to that is the chromatic tuner. On the second row are gain, volume, and tone controls along with a master and the amp’s off and on switch. All very compact and easily recognizable.

But let us return to the i-Cube Link that we mentioned earlier. This is a great example of maximizing modern technology. Something that Roland has proved over the years to be rather good at.

It is a simple concept. It provides a direct link interface between the amp and Apple’s iPad, iPhone, and iPad touch.

Using this, you can connect to your playlists on your devices and play along. It also gives you the opportunity to forward digital effects and your favorite tones to your chosen iOS recording app. Any tones and sounds you can come up with can then be saved and forwarded to the app. You can then use them the next time you record.

Remembering that this is just a five-watt speaker and a three-watt amp, the sound is very good. You may think that 3 watts are nothing, but it is still loud enough to necessitate the inclusion of a headphone socket.

The sound you can achieve does revolve principally around the effects that are built-n. However, you can get a reasonable level of distortion and overdrive by just using the amp itself without any help. As a stand-alone amp with no effects added, it is crisp and clear, which is common with some Roland amps.

You will notice a deterioration in the sound quality if the batteries begin to expire. But this is not uncommon with the vast majority of battery-driven amps.

When you have Boss as a subsidiary, it gives you the freedom to include what you like in an amp like this. And some of them are in there as you would expect.

There are eight Composite Object Sound Modeling, COSM, features included. Eight different guitar amp models. Now, if you have designed and manufactured one of the world’s great amps, would you include it? Of course.

The JC-120 is there, along with seven others that take you from jazz to heavy rock. All the options then are included. On top comes an Extreme amp setting, which will give you face-melting metal.

Roland has included five to manipulate the sounds. They are set into two controls, as we have already mentioned. One control handles the EFX of Phaser, Flanger, Chorus, and a new sound, heavy Octave. This adds some bottom-end power to already distorted sounds.

The second control is concentrated on two of their very special effects, the Delay and Reverb. A Boss specialty, of course, they have added a new Spring Reverb sound that conjures up memories of the Beach Boys and Surf music.

Just about everything you will need at a basic level. And as we have already said, you can create your sound and keep it. Even send it to an app for use in later recordings. 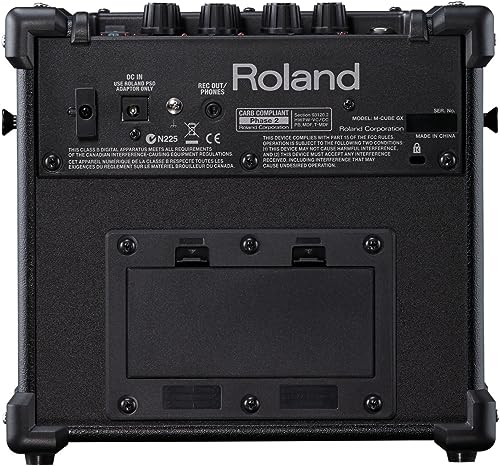 As we have already said, it runs on batteries or using AC power. To this end, Roland has included the AC power adapter. There is also a carrying strap. You also have free access to the Roland Cube Jam app. Linking up with i-Cube, it becomes a center for practice, recording, and even learning.

If you are recording, the app allows you to adjust the guitar volume and any backing track independently. You can then send it to a 16-bit, 44.1 kHz WAV file. Cube jam will also give you speed and pitch adjustment options.

This is not going to be the cheapest portable amp you will find. In fact, there are many significantly cheaper. But they do not include what this little amp has. How could they?

Roland and their subsidiary Boss make great amps and great effects. Put them together in a box like this, and it is worth the extra investment. If you want real quality, that is.

So what have you got here? The Sound, the quality, great battery life, great effects, and options for saving and sending to applications. Is there anything else you need? 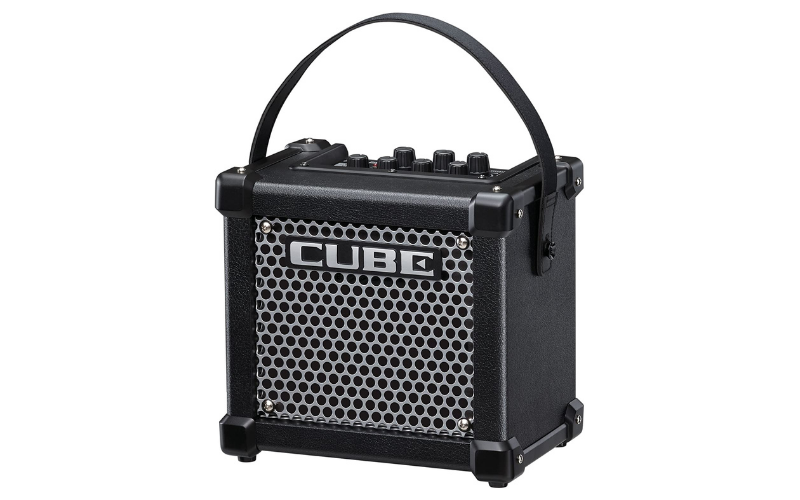 For a portable practice amp, we doubt it. Roland knows what they are doing. The success of the Cube series has proved that. This is another page in the book.

A great little amp and one that is worth every penny you spend on it. After all, small is beautiful.