The range of speakers available these days seems never-ending. They come in all shapes and sizes and perform different functions. There are the middle range, the budget systems, and the bank-breakers. All of them compete with each other in their section of the market.

When it comes to choosing your speakers, performance plays a major part. Some of the best budget speakers offer a high-quality sound; others fall well short in that department.

Polk is one of the companies that offers decent quality, cost-effective speaker systems. We are going to take a look at one of their popular speakers in this Polk Audio TSi500 Review. Before we do, who are they?

Polk was formed in Baltimore in 1972. Today they manufacture a range of systems for a variety of uses. They are well-known for their home entertainment products but also have divisions for Marine and Car Audio speakers. And, they have a reputation for building some of the loudest speakers on the market.

The HQ in California these days, but being a part of the Sound United group, development work is also undertaken elsewhere. All design and testing work is undertaken in Baltimore.

Then the specifications are sent to China, where they are built. Quality control is undertaken on the finished product after it has been shipped back.

The TSi500 is considered one of the flagship speakers of the TSi series. It has four drivers and a single tweeter to generate plenty of sound.

It is probably best described as one of the most versatile speakers you can buy. As part of a surround sound system, it could be used as the front channels. On its own, it might be a little bit lightweight in sound. As a pair, we think it will perform a little better.

However, if you are looking for a better-than-average sound, it would still need a decent subwoofer. This to generate some extra bottom-end.

In a music system again, it will perform reasonably well. Not going to set the world alight, but then the price doesn’t, as we said, a speaker that fulfills a range of functions. Quite a good selling point if that is what you need. Let’s take a closer look.

It is made from standard particleboard and has a wood grain finish. There are small legs at each corner to create space between the speaker and the floor. This is because there is a downward-firing bass port. Additionally, this also makes it one of the best floor standing speakers on the market.

It measures 14.8 by 8.3 by 44.4 inches and weighs 45 pounds. There is a non-magnetic grille which, when removed, reveals the fixing holes on the front of the cabinet.

It is equipped with four 6.5-inch drivers and a one-inch tweeter. They each have pewter-colored trim rings. It does look a little crowded with these rings. The trim rings on the top two drivers and the tweeter overlap each other. Not really what you might refer to as pleasing to the eye.

Nothing really to get excited about with the build. The quality is adequate, but it isn’t the most attractive-looking design of speaker you will find. That is only part of it, though. Let’s go on to what most would consider the important issues.

Is this strictly a budget speaker? If so, it could be considered an expensive one. Is it supposed to be a mid-range speaker? In which case, it would be a very cost-effective price. But would it sound good enough to be placed in such company? We are going to place it in the budget range for the comparisons.

Clean at the top end…

It has little to excite you about the sound; it is what you might call okay. When placed up against inferior speakers, it will sound good. Crisp and clean but with little in the way of a bottom-end.

But place it up against anything that is quite good, and it will struggle. The biggest problem, as we seem to keep mentioning, is it seems to lack any real penetrating bass. The bass port helps but not to a level where it makes a big difference.

It is a speaker that is referred to as a 2-way crossover. We are not sure that gives a clear picture. In some ways, you could refer to it as a 3-way crossover.

We say this is because of the four woofers; the bottom two are low-frequency. The top two are ‘mid’ woofers. Between the four speakers, they handle the mids and the bass. Add on the tweeter giving you the high end, and that makes three rather than two. Just an opinion. 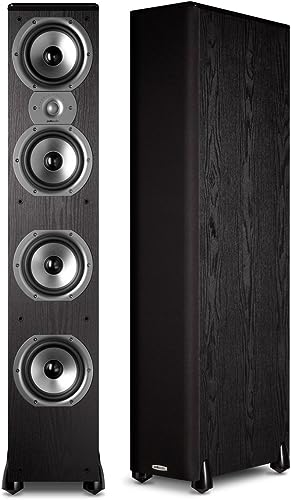 We would best describe it as adequate. Nothing fantastic at all, but not poor. The silk/polymer composite twitter delivers some nice highs, which is possibly the best part of the sound.

It is rated at 300 watts peak, which will be about 120 watts RMS. So, it is one of the most powerful cheap speakers available. But, it should be noted again that a subwoofer will make a real difference.

The 6.5-inch drivers/woofers have organic fiber cones. The mids they produce are fine, but they don’t really give any depth. This is supposed to be the realm of the downward-firing bass port.

This is an interesting concept. In reality, there shouldn’t be that much of a difference between down or front-firing ports. It could depend on the surface on which it stands. A carpeted surface won’t reflect the sound as much as a hard surface.

There are some advantages to a down-firing port. One is stability. With the weight of the speaker and the magnet low down, it reduces the risk of the cabinet moving.

If the speakers can’t handle the lower frequencies, there is always going to be a problem. And that seems to be the case with this speaker. The frequency response is acceptable at 28Hz to 25kHz, but for us, the lack of a rich and warm low-end is rather disappointing.

This is not what we could call a high-performing speaker. However, it is adequate in what it does. And has the advantage of working in a variety of situations. We would be a little more enthusiastic if the lower frequencies were better. But it is lacking in that department, and that affects the overall performance. 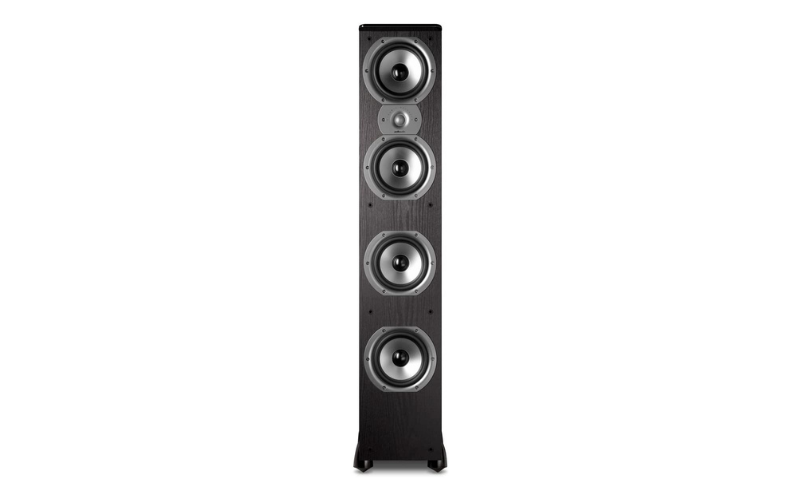 Furthermore, it isn’t a particularly good-looking speaker. With the tweeter overlapping the trim of the top two speakers, it just looks cluttered. It isn’t what you would call a cheap speaker in the budget range. And if you have two of them, which you may well need, it is starting to get expensive for what it does.

There will be people who like Polk speakers to whom it will appeal to. And in a system with a good subwoofer, the high frequencies will perform. But there are better value for money speakers out there, in our opinion. 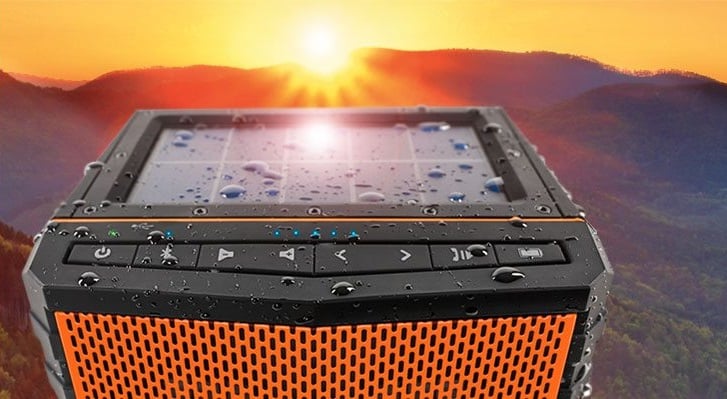 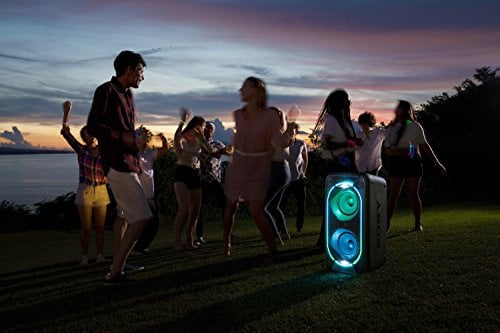 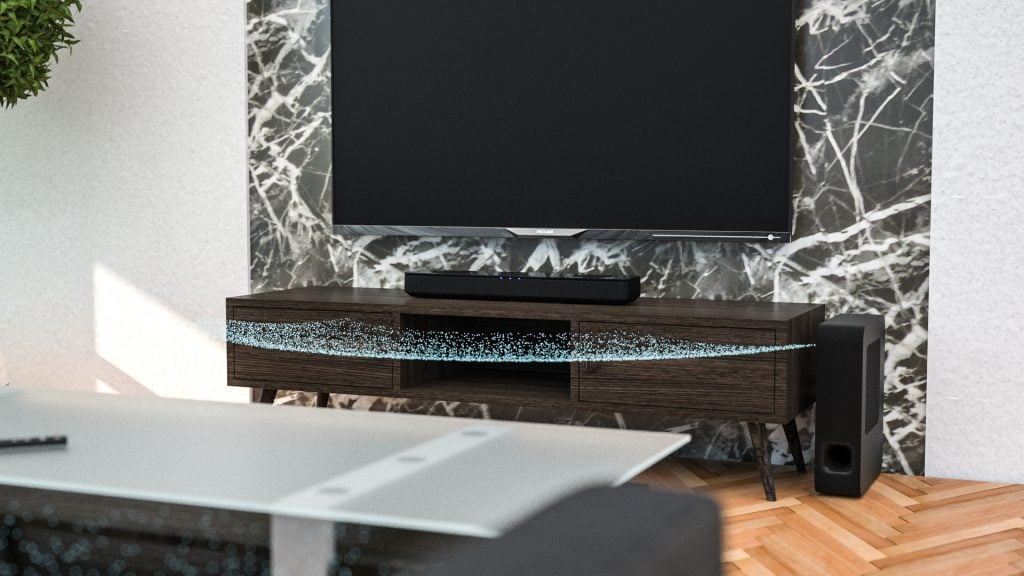