Peachtree is a US audio manufacturing company that formed in 2007 when they launched their Decco amplifier, which at the time brought with it some revolutionary ideas. The Decco was a different type of integrated amplifier created to enjoy the convenience of digital music files.

However, to ensure audio quality, this had something new inside – a DAC, Digital to Analog converter.

It created a stir on its first appearance and brought Peachtree to the attention of the audio world. And quite rightly so. It had become the first integrated amplifier that offered a USB. This meant the DAC onboard converted music to analog directly from your laptop. A new innovation that produced great results and received its well-earned praise.

This creativity hasn’t ended with the Decco. Peachtree is still pushing forward with new and creative ideas with its Nova 300.

The company are now based in Bellevue, Washington state, not far from Seattle. And nowadays, the Nova amp is built in Canada. All their previous products had been made in China. 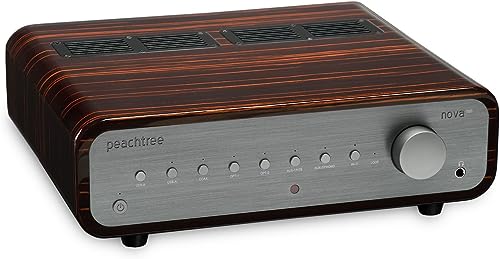 There is no big secret as to what Peachtree is trying to achieve with the Nova 300. They wanted to design an amp that would do it all. When we say ‘do it all,’ we mean play every different type of file to the most-used HiFi sources. Drive any type of speaker, small or large, and have enough power to fill any room. More than that, they wanted it to look good and not cost two arms and a leg.

What we end up with after the designers set to work is the Nova 300. But, does it fulfill its brief? 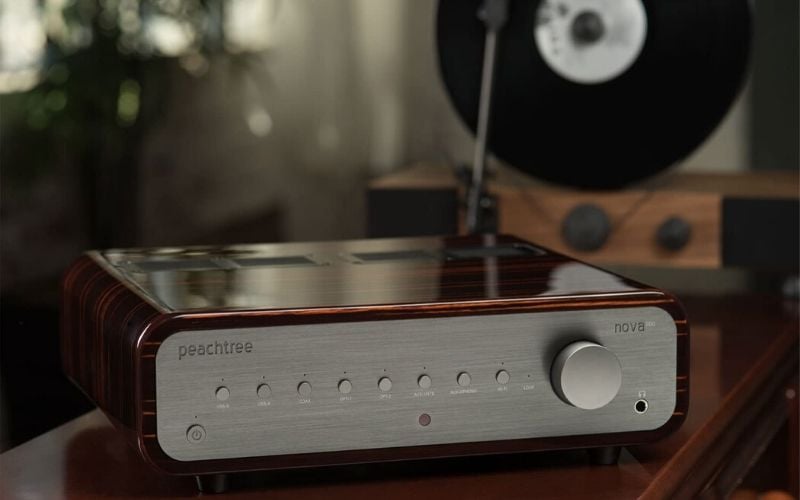 If you want to build an amp that is going to impress, then it also needs to make a big first impression. But an impression that isn’t overstated or garish or buried in control knobs. A look that says, “take me seriously.”

Peachtree has achieved that. It is certainly not a physically small unit measuring 14 by 4.8 by 13.25 inches and weighs seventeen pounds. It has a stylish design with rounded edges that soften the look and give it a mature, refined appearance. The shell is made from high-density fiberboard (HDF), while previous offerings had been manufactured using MDF.

It is a wrap-around design with a stylized pattern. The wood effect covers all the surfaces of the unit except for the front plate and rear panel and air vents on top. The front plate is aluminum and the rear panel also metal. On top are two large air vents for cooling that are also made from metal. 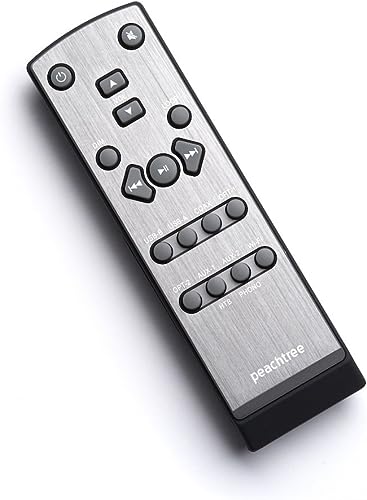 It is an integrated amp having both a preamp and a power amp built-in. As we already mentioned, it also has a digital to analog converter and a class-AB amp for headphones. The DAC handles audio from 32bit/384kHz to 5.6 DSD. DSD is Direct Stream Digital and creates a high-resolution signal. The sample rate with DSD is much higher than with FLAC or other file formats.

Bye-bye to the valve…

With some other Peachtree products, there has been a window in the panel at the front. This was to display a dual-triode vacuum tube doing its thing. That thing being preamp stage buffering. That has now disappeared, which may be disappointing to some. The Nova 300 is completely solid-state.

There are eight buttons along the front of the display which light up. These indicate not only the input source but also volume levels. There is also a headphone jack socket.

Connect to just about anything…

We mentioned in our overview that Peachtree wanted to build an amplifier that would ‘do it all’. An example of what we meant can be seen on the reverse panel. 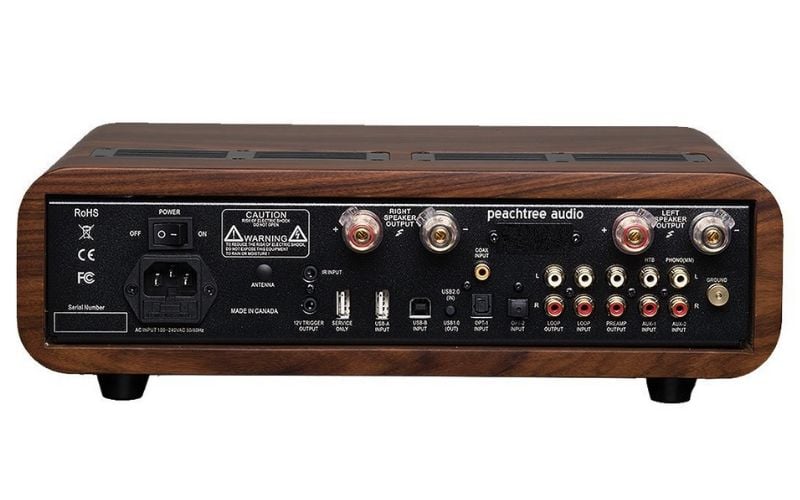 There are an impressive range of inputs and outputs that just about ‘do it all’. There are two USB ports. One of these is just for iPhones and iPads. Also, there are two optical inputs and a coaxial and Aux input. There is an input for Phono and for turntables, an earth connection. Should you want to use an external subwoofer, there is a preamp output.

Quite an impressive array are included. And there aren’t too many potential connections that have not been thought of and included.

It has an RMS rating of 300 watts and 450 watts peak at 8 ohms. That is probably loud enough for most people.

There cannot be too many complaints about the quality of the build. The buttons on the front are possibly the weak point. But as with all ‘press to initiate buttons,’ there is a certain amount of movement, and they can feel vulnerable. However, they are well built, and we don’t see that as a negative.

The sound of this amp will almost certainly be dictated by the quality of the speakers you use with it. When you get this quality, you are going to need high-performance tweeters and drivers and powerful woofers. If it doesn’t sound right, then don’t blame the amp.

There doesn’t seem too much point in reeling out endless technical specs on performance or sound. You can read those elsewhere. The only stat we will include is that the frequency range is from 20Hz–20kHz.

What you really want to know is how it sounds?

Well, the answer to that is simple. Stunning. In fact, if you are not used to hearing this level of quality, it might come as a bit of a shock. The sound is big, spacious, and very full, and it doesn’t have to be loud to produce those results.

The low frequencies resonate with their depth. The bass guitar was driving, the kick drum separate and clearly defined. And as you move through the mid and higher frequencies, the same principles occurred. Instruments and sound separated. Nothing crowding anything else, and everything articulate and in its place.

The drums are bright and sharp, vocals precise. The top end is not shattering to the ears but gives great clarity. The sound is aggressive when it is supposed to be but lays back when required. Even the headphone sound, driven of course by its own amp, was something special, which is not always the case.

As we said earlier, it is also loud if you want it to be. We often read about this power rating or that power rating. The product concerned, of course, rarely reaches that level of output. Persuasive marketing, in some cases. That hardly needs to be applied here. This is loud, and you will not need to be convinced that the power rating is 300 watts RMS and accurate.

We might be giving the impression we are impressed. You would be right. The sound takes you on a journey to a place you may not have visited before. Sit back and enjoy it.

On the front of the amp are eight choices of inputs. These are easily selected by pushing one of the buttons. Two of them, Aux1 and 2, are for line-level analog. Holding down the Aux 2 button and the RCA jacks on the rear operate as the line-level inputs. Depress the button for five seconds, and they become the inputs for the phono. 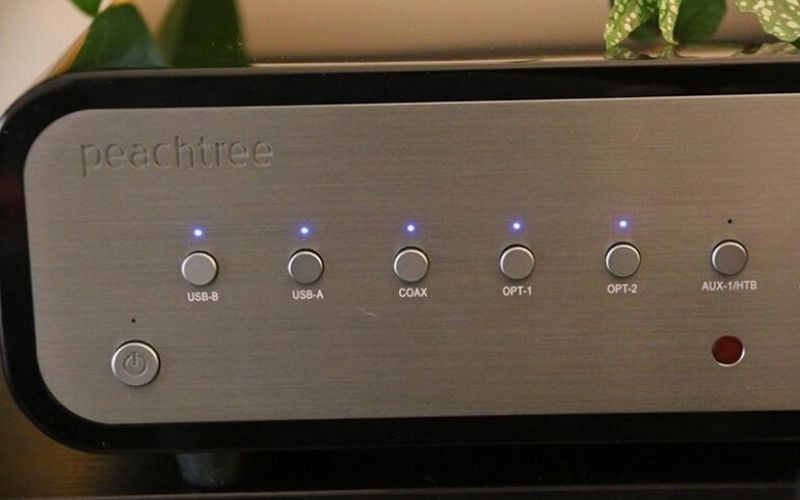 On the right side of the front panel is the volume control dial. The front panel tells you where the volume level is set by illuminating the lights over the eight input selectors, similar to a horizontal LED indicator. Once the volume is set, the lights revert to indicating the input in use. The controls are replicated on the remote control provided.

Designed to be easy to operate…

There are many times when we review products, and it isn’t always a happy experience. Often the tech guys in planning seem to go out of control. It becomes an exercise in just how much tech you can squeeze into a little box. You take whatever it is out of the box and then look for a NASA engineer to help you operate it.

Sometimes the tech just goes too far, and you end up with too many features. More than you would ever use. Even if you could understand how to use them. Not with this amp, we are pleased to say. This is a stereo amp, and it has been built and designed to emphasize its simplicity.

How simple is it?

Take your source of the sound and connect it to whatever section on the backplate is appropriate. Select the correct input from the eight choices on the front. Sit down and get ready to be impressed. Does it come much easier? In a word, No, and no one was needed from NASA to explain anything.

You don’t need very much, it’s all inside. But you do get a detailed instruction manual and a power cord. You also get a decent length of USB cable. You would expect that much. But you also get a better than average remote control. 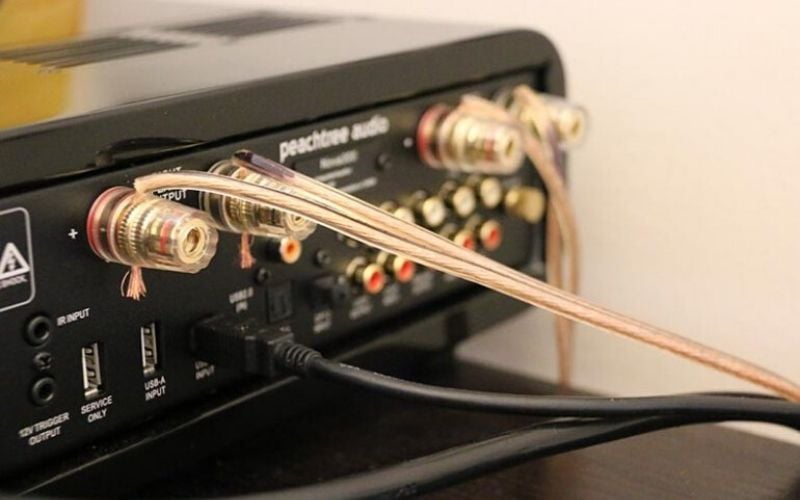 Sometimes we have found with remote controls that they are just a token gesture. This unit, however, performs well. It has exactly the same controls as are on the front of the amp. The exception is that the volume control is an up and down push control rather than a revolving dial. It is well made and well laid out and like the amp itself easy to use.

Needs Some Great Products To Run Into Your New Amp?

You may also be interested in the Best Music Streamers, the Best Floor Standing Speakers, and the Best Record Players Stands on the market.

This is no entry-level amplifier, and it certainly isn’t priced as such. When you pay this sort of money, you can reasonably expect a lot in return. With this amplifier, you get a lot back.

In the interests of balance, though, it’s only right to tray and highlight any problem areas with any product. It should be remembered though that what may be a negative for some will not concern others.

There isn’t much that we can highlight that might be negative. We find ourselves having to look hard to find something. Possibly the input selector buttons on the front panel may feel a little flimsy, as we have already mentioned this earlier. With a push-button design, there is bound to be a little bit of ‘play’ in the action.

The only other area where we might be concerned is that the amp does run rather hot. This is not uncommon, of course, but it is something to be aware of.

But a bunch of positives…

But despite these, what we would call, minor issues, there is not much to complain about. It is an attractive design and is well-made. It is easy to use with some well-laid out and clear controls and an effective remote. There is an abundance of connection options, and having its own headphone amplifier makes a big difference.

But it is with the sound that the points are really scored. When Peachtree sat down to design the Nova 300, they wanted to include many things. But they would have wanted it to sound great. And it certainly does that. That would have been at the forefront of their thinking.

Financially it is an investment. It is not the most expensive amp you will ever see, but it certainly isn’t the cheapest. But for the outlay, and at its price-point, it is one of the best sounding amps around. 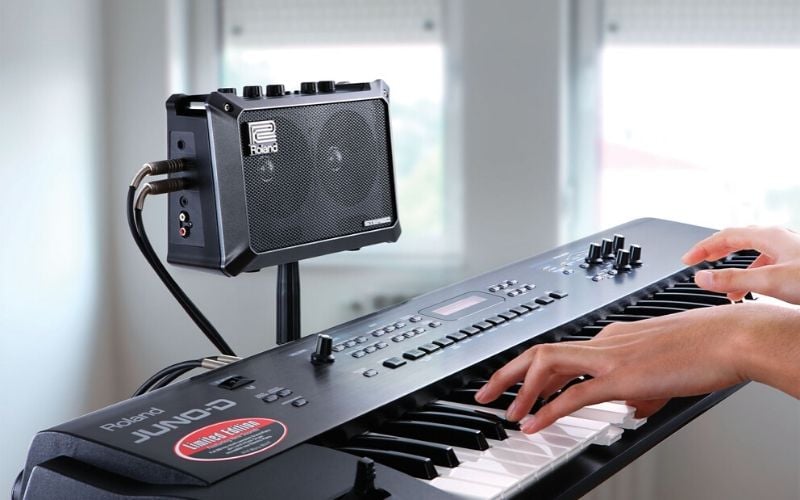 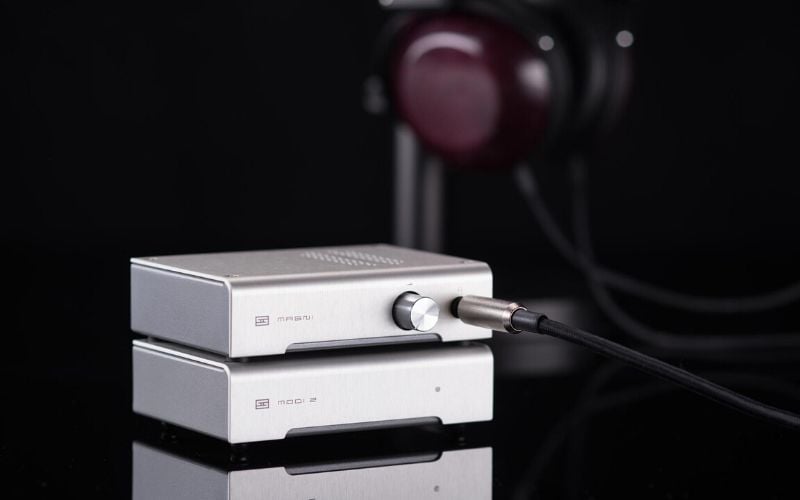