Dave Gilmour, Carlos Santana. Joe Satriani, and countless others. They have all used the sound it creates to give them what they were looking for.

And now you have a chance at getting a little closer to the sounds those legends created. You’ll find out in our in-depth MXR M234 Analog Chorus Pedal Review. But first, let’s get a better understanding of the chorus effect and some background on MXR.

Chorus is a modulation effect. It is quite similar to a Flanger pedal. The difference is that the delay effect used to create the Chorus sound is longer than on a Flanger.

The purpose of the Chorus is to add color to your sound and thicken it up. To make it sound like there are a group of guitars all playing the same thing. A “chorus of guitars,” if you will.

How does it work?

It works by splitting up your guitar signal. The chorus effect creates multiple voices of the original signal. Then it modulates the timbre and pitch, delaying those sounds from the main signal. What you get is a full ensemble-like effect.

It creates the illusion that there are multiple guitars all playing the same thing. But not quite 100 percent in time with each other. That adds realism to the effect because they wouldn’t be exactly together if a dozen guitars played the same thing.

As some would say, there is nothing quite like it.

The first commercially available chorus pedal was in 1976. Are we surprised it was Boss and their CE-1 Chorus? Of course, not! In retrospect, we’d be surprised if it wasn’t made by Boss.

Boss is a subsidiary of Roland. The two companies work very closely together. Roland had produced one of the world’s greatest amps. The Roland Jazz Chorus 120. And as you might guess from the name, that amp featured a Chorus effect.

And guess where that circuitry later ended up?

Yep, in the one and only Boss CE-1 Chorus pedal.

Now, pretty much every pedal-maker has some version of the chorus pedal. One such company is MXR with the M234 analog chorus. So, before we get into the details, let’s learn a thing or two about this well-respected pedal manufacturer. 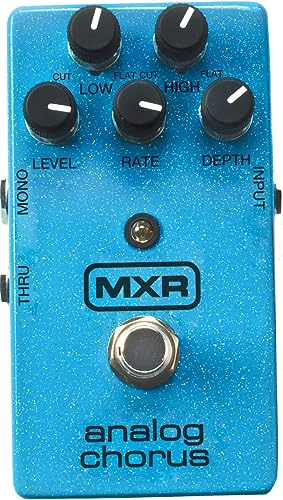 Two college friends were responsible for the formation of MXR in New York in 1972. It didn’t take long for their first serious attempt at a pedal, the Phase 90, to appear. Van Halen used it on both of the first two albums the band released. That was one heck of an endorsement for the new kids on the block.

The Phase 90 was followed up by the Dyna Comp, another very good pedal. And just like that, MXR had arrived. The brand name was acquired by Dunlop in 1987, and they continue to produce some of MXR’s ‘biggest hits’. They also produce later models under the MXR name.

Somewhere in between the MXR Stereo Chorus, and the minimalist version, the Micro Chorus, sits the MXR M234 Analog Chorus Pedal.

It was a big decision to design a pedal that combined so many of the tones previously used. But the smaller Micro pedal wasn’t as successful as it hoped to be. The MXR 234 Analog has proven to be a pedal that fills that gap.

It still has a small footprint and is what you would call “pedalboard-friendly.” But it has far more control over the sound utilizing the five control knobs than most of the mini chorus pedals out there.

It manages to maintain the Analog sound and adds a little extra to it. This is one chorus pedal that offers a lot of sound-shaping possibilities. Is it the best analog chorus pedal you can buy? Let’s have a closer look and find out… 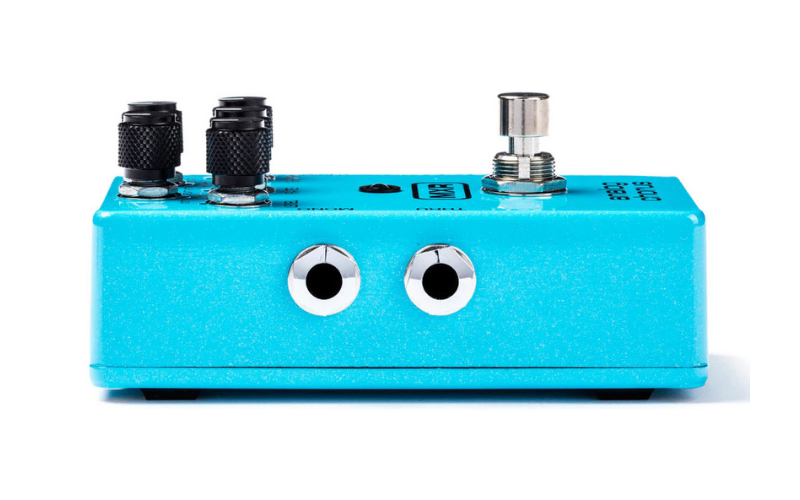 Whilst MXR is known for their solid build quality, there was a time when they used plastic for pedal casings. It was quite a heavy-duty plastic, and they moved away from all-metal construction.

This pedal has an all-metal housing that is very heavy duty. Built for the road. Just about everything about this pedal has a tough build. It measures a compact 2.6 by 5.5 by 4.4 inches, so it is not going to take up too much pedalboard space. And all the sockets and switches are well-made and very durable as well.

Being an Analog pedal, it features bucket brigade circuits. That will give it the authentic sound you would expect. It runs on one 9-volt battery. There is an optional AC adapter available if you prefer.

It is assembled in the US. But as MXR does use overseas production facilities, it is likely the majority of the parts are made elsewhere. But we do have one little criticism. To open the battery compartment, there are four small screws. Not easy to change in a hurry, and a minor nightmare if on stage.

We have already mentioned the bucket brigade technology used. The tones created are familiar and very full-sounding. You would expect that, but there seems to be a little extra from this pedal.

Most of this is down to the level of control you have over the sound. We shall discuss the controls later, but it is the two EQ control knobs that add something special. The sounds you that can from this pedal ranges from a subtle chorus edge to a full-on ensemble of sound.

At the turn of a couple of those controls, you can go from a gentle shimmer to a Gilmour-like swirl. Or you can stop off anywhere in between. When you get a chorus set up right, there is very little like it.

You may need to play with this pedal for a while to get it right, but it is in there. You’ve just got to find it. But isn’t that half the fun?

What’s the best way to use it?

Well, these days, chorus pedals are made with guitars in mind. So, that is the best place to start. Nonetheless, this analog chorus will still work well with a keyboard or a synth. However, if you are thinking about using it for bass, it will work. But there is also an MXR Bass Chorus Deluxe Pedal, so you are probably better off there.

How about with a microphone? We have heard this for ourselves, and we were impressed by what this pedal can do for a vocal track. It can be quite staggering once you have learned how to get the sound right.

Do you want a choir? You’ve got one. We know a band that used it to create some fresh and innovative vocal tracks. However, we’re pretty sure it is better to use a dynamic microphone rather than a condenser. Food for thought, folks. 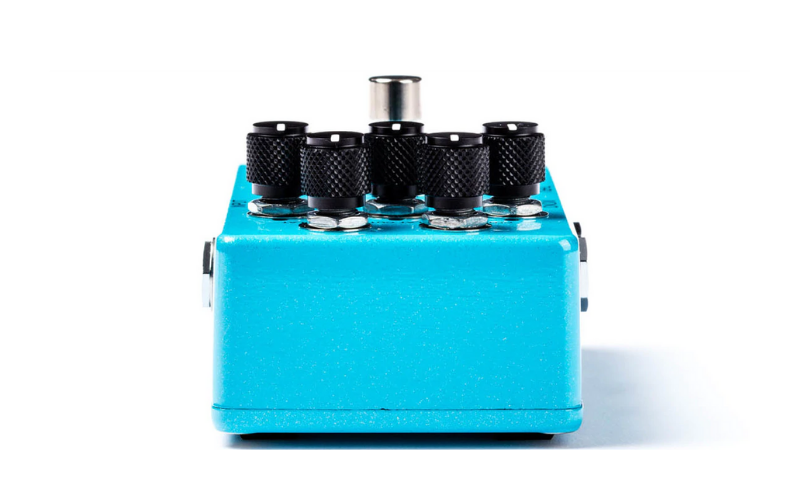 So how do you get that level of performance we have just been discussing? There are five control knobs positioned at the top of the pedal. Rate, Depth, and Level controls along with High and Low cut controls.

The low-frequency and high-frequency cut controls are interesting. These allow you to either cut or boost either lows or highs. You are unlikely to find similar sound-shaping options on other chorus pedals. They’re a good asset if you know what sound you’re looking for.

But really, it is the other three controls that give you the real deal. The possibilities for creating distinctive tones are extensive. And all with just three simple control knobs. In fact, just adjusting the Level control, you will see how much potential this analog chorus has in store.

Finally, there are three ¼-inch jacks; Input, Thru, and Mono. Of course, we always recommend you consult the MXR analog chorus manual to ensure you are connecting and using this pedal correctly.

Get the sound you always wanted with the perfect effects pedal. Simply check out our in-depth reviews of the Best Uni Vibe Pedal, the Best Phaser Pedals, the Best Mini Guitar Pedals, the Best EQ Pedals, and the Best Boost Pedals you can buy in 2021.

Also, take a look at our reviews of the Best Wah Pedals, the Best Guitar Pedalboard, the Best Compressor Pedal, the Best Pedal Power Supply, and the Best Patch Cables currently on the market.

We have to say this is a decent pedal. There is something about the sound of a chorus pedal. But an analog chorus pedal opens up so many pure sound options.

We know it isn’t the best chorus pedal out there. Some offer a bit more, but they also tend to be more expensive. 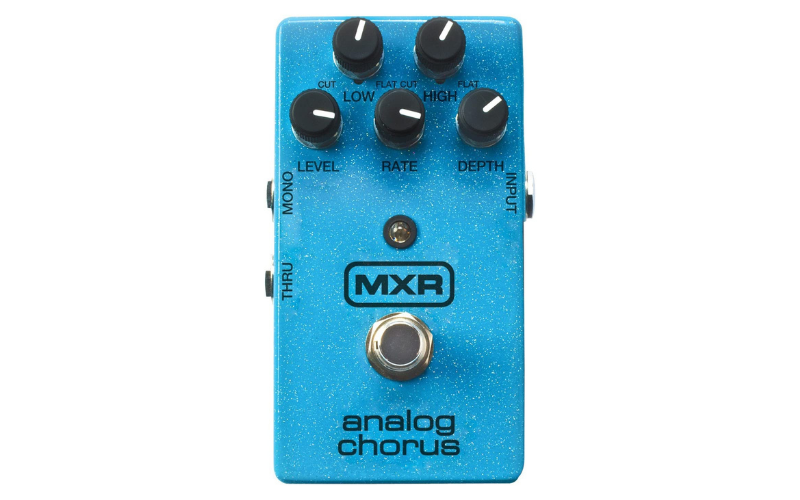 This is a good pedal at an attractive price and well worth a look. Based on the price point and the features included, it delivers excellent value for your money.

Until next, let the music make you groove.