Sometimes the solos are given to instruments that pierce through the mix of the rest of the band or orchestra. Maybe violin or piano. Other times the levels of the orchestra might go down by softer playing whilst the soloist plays harder than usual.

No such concessions in the world of rock music where it is often ‘loudest wins’. The soloist, often the guitar player, needs a bit of help. That is why we now need pedals like the MXR M133 Micro Amp.

What can they do?

They might be able to use a compressor. But that only increases the perceived loudness by leveling the volume of the playing. And it takes its toll on natural dynamics. It won’t let you play aggressively and then softly.

An overdrive will boost the signal with its gain and level controls. The only problem with that is you get tonal alterations. Suddenly you haven’t got a clean tone anymore. So what is the best pedal for solos?

What you need is a boost pedal…

Something that will simply give your sound an increased level but without altering the tone. Keeping the tone the same can be very important. It doesn’t matter whether the sound is overdriven or clean.

A good booster will increase what you have without changing the sound. For anyone who does a lot of soloing, a boost pedal is one of the essential guitar pedals.

Does this pedal fall into that category?

We’ll find out soon, but before we do, who are MXR?

Once upon a time, there were two school friends, Keith and Terry, and they hid away in their basement in New York. It was 1972, and everyone was trying to get into music in some way. But our little friends decided to make things and sell them. They wanted to make different sounds, and they smiled and were happy friends at what their pedals could do.

One day while they were working away, a rather strange Dutchman came banging on the door. He said, please let me use your Phaser pedal on my band’s first two albums.

Van Halen was very excited when the sound they produced made people take lots of notice of them. Terry and Keith were also very excited. A queue to buy their pedals started in the street outside their basement apartment.

They did very well and made many effects pedals people liked. But then they stopped working for their company MXR. They went off to do other things. Everyone was very, very sad.

But then, an acquirer of brands and things with a reputation, Dunlop, came along and acquired the rights. MXR was not lost to the world after all. And once again, people smiled, and everyone lived happily ever after. Something that hasn’t been lost to the world is the M133. Does it offer you a simple, clean boost of tone? Let’s find out in our MXR Micro Amp review… 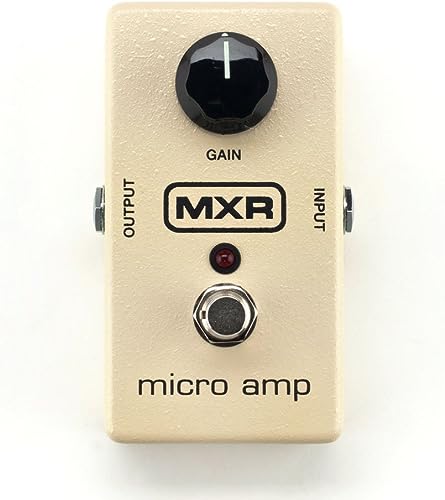 There is no big secret to a boost pedal. It is one of very few deceptively simple effects that can make a big difference to your sound. If what you need is a bit of extra noise but still keeping the tone and the dynamics, this could be it. This pedal will allow you to grab your signal before it gets to the amp. It will then give you that extra volume you need.

Help in other areas…

It doesn’t only perform that task. It will match up the output levels from different instruments with their different pickups. This matches up the levels from single-coils and humbuckers to the same level.

And if you have an effects chain that is rather lengthy, you may be experiencing a signal drop-off. It can provide a permanent boost to solve the problem.

This pedal can make a difference. Basic and simple as it is. You don’t always need an engineer from NASA to make you sound better. Sometimes it is just you and something like this. So, let’s take a closer look… 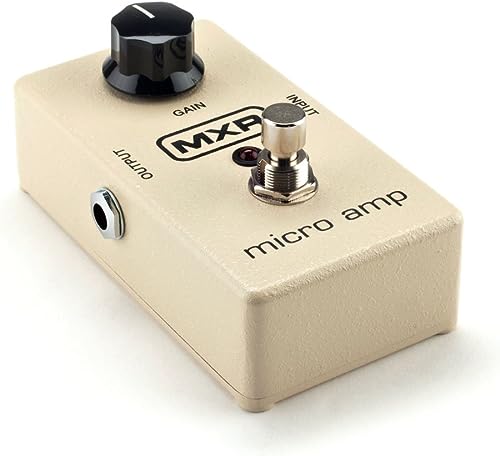 At 5.9 by 4.6 by 2.7 inches, it looks like a regular pedal, and size-wise it is. It will fit comfortably on most pedalboards. The casing has a tough metal build with a footswitch. It is built to take a few stomps, and it will probably have to. MXR does make some of the best effects pedals on the market.

There is one rotating control knob and a red LED that are both placed on top. Also, a ¼ inch jack socket input and a ¼ inch output one on either side. You can give the NASA engineer the day off. It has true bypass.

The parts are sourced from worldwide manufacturers and are assembled at Dunlop in California. It is powered by one nine-volt battery or through a Dunlop adapter which is not provided. The battery should give you about 50 hours of use.

The controls couldn’t really be any simpler. There is just one rotating control to set the amount of gain. Once you have set that, all it takes is to push the footswitch to engage it. There is an LED indicator that will glow red when it is in use. The footswitch toggles the effect off and on. When in the off position, the pedal has true bypass.

With a pedal like this, it doesn’t take too much analysis or thought. The only question to ask is, does it work? You can judge that simply enough. When you engage it, can you hear your solo?. If not, perhaps you need to increase the gain a little. That ought to do the truck.

As we have said, the gain is set by the single rotating control knob. The amount is preset, so if you need a little more, it is just a case of rotating the dial.

The pedal will give you a gain control level of +0.5 dB to +26 dB. This is more than enough and will cut through the vast majority of background sound. This is within the normal range for most of the best boost pedals available.

When the pedal is not in use, the red light will not glow, and there will, of course, be no increase in gain. In that mode, your signal has no modifications at all.

Effect on the Tone…

We have already discussed this a little. There is no effect on your core sound at all. That is an important plus. If you wanted a change in tone for solos, then there are a lot of pedals that will give you just about every sound you may want.

But increased gain with no effect on the tone is not as easy. With the M133 Micro Amp, it is. Just turn the dial. The volume goes up. Your tone stays the same. Simple.

We have to say that we have always been big fans of a tube amp cranked up and then given a bit more. To us, there is nothing quite like those early Marshalls, HiWatt, and Orange amps.

To have the chance to “give it a bit more” is a great idea. And there is no doubt this pedal does it. You can match up the volume levels of different guitars, and it offers a boost without changing the tone.

You could argue that a boost is a must-have pedal for those that need to solo. But here comes what we see as the problem with this pedal. 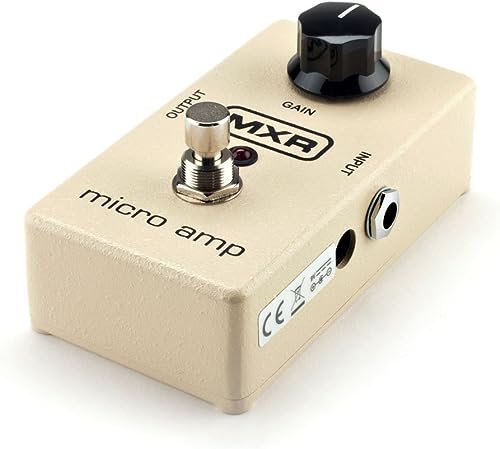 We have made much of how simple it is to operate, and it is. But there will be some who just need a little more. We are not talking about massive amounts of controls, dials, flashing lights, and tea-making. Just a couple of extras that will set it apart. In that respect, it could be lacking.

That is not our personal view, however. Its job is to increase the volume level with no change in tone. That’s it. That is all you want from it, and it does that just fine, in fact, better than that – It does it well.

And it is a big but. Despite it being a decent pedal, there are a lot of others that do the same but for less money. For those that might be looking for the best guitar fx pedals, that is certainly going to be a negative; however, for those that like MXR pedals, it might not be.

But with so many more affordable options on the market, it might struggle. As we say, a decent pedal that does its job, but it may be a little overpriced.

Until next time, may the music make you move.