Before we get to our in-depth Mendini by Cecilio MTT-L Trumpet Review, a little history…

The story of the trumpet goes back a long way. To approximately 1500 BC to be reasonably accurate. Trumpets made of bronze and silver were found in Tutankhamun’s tomb in Egypt. Other ancient versions of it have been found all over Asia and Northern Europe.

The model we are more familiar with today arrived in the 15th Century, but valves were not added until 1815. This is most notably represented in the works of Mozart and his contemporaries. In their work, the role of the trumpet was limited because of its potential. It has since that time been well featured in Opera, Symphonies, and Concertos.

Jazz the night away…

It found its way into Jazz and eventually through Pop music to Rock and beyond. It’s a staple instrument these days. Having the highest range of all the brass instruments, it is the most audible. That includes the occasional intonation error.

Notoriously difficult to learn, it is a popular instrument amongst students. Trumpets suitable for beginners are therefore important. Mendini makes these starter trumpets. But who are they?

Mendini is a subsidiary of Cecilio instruments. They are known for producing affordable orchestral instruments. Not only in Brass but also Strings and Woodwind. They are made in China and shipped back to America for final testing before distribution. Cecilio has a team of musicians who advise on the design and quality control standards necessary.

The Mendini range is designed especially for the starter or improver; therefore, the needs of the young players are taken into consideration in the design. They are recognized as being one of the best manufacturers of instruments for beginners. 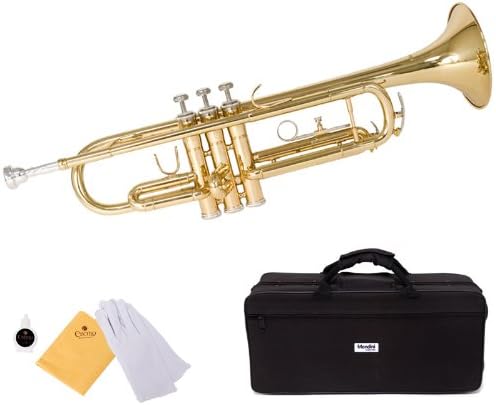 The MTT-L is a trumpet designed for the first time user. It is a B flat trumpet, as is the usual key. There are some trumpets in C, but they are usually in B flat. They are in this key because it opens up a variety of genres for its use. It has many attributes you will find on more expensive instruments. The MTT-L is a starter trumpet that is popular amongst new players. It is a budget level instrument, so we need to see how it measures up.

Therefore, without further ado, let’s have an in-depth look at a Mendini trumpet by Cecilio…

It has a yellow brass body as do the majority of instruments you will see. Yellow Brass is, of course, an alloy, and in this case, the component allocation is 70% Copper and 30 % Zinc. It is known for being easy to work with but also for producing a rich tone.

It has a hand-finished one-piece Bell. Having a one-piece Bell is seen as an advantage for creating a good sound. This is because the metal will vibrate in a more even manner — an important element of the overall sound performance. A one-piece will tend to produce a very bright tone. 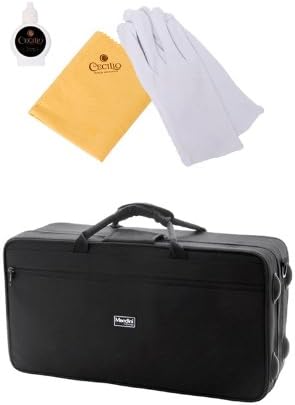 The body has a good build and is finished with gold lacquer. So there is not any confusion when looking at Mendini trumpets the ‘L’ in the MTT-l stands for lacquer. One of the important areas to take a look at, especially with the more affordable instruments is the soldering. On this instrument, it is fine and demonstrates a good quality build.

It has a good bore size at 0.46 of an inch, which is ideally suited for a beginner. Bore sizes range from about 0.45 to 0.475. As the smaller bore size takes less breath to get a good sound, usually the smaller, the better. The other essential element of a good sound is the Bell.

There is a healthy five-inch Bell on this instrument. The smaller the Bell or as it is sometimes known the flare, the sharper the sound. A five-inch Bell diameter is not considered small, and a larger Bell will produce a warmer sound.

It has saddles for the first and third fingers. This is also an important inclusion for a starter as it makes the instrument easier to hold and control. Trumpets are not particularly big instruments, but they can be awkward to hold in the early stages. This Mendini trumpet is 22 inches by 7 by 11 inches and weighs 5.9 pounds, which are about average.

The lead pipe, which is the pipe that leads from the mouthpiece to the tuning slide, is made from phosphorus. This is not a common metal used on cheaper instruments. You will usually find phosphorus lead pipes on more expensive instruments.

All very good in terms of build quality and materials so far. But it is a budget instrument and to keep costs down there must have been some corners cut somewhere.

We have already mentioned the finish being lacquered. It is common to see that today. As production costs rise, there is still a need to make the instrument look attractive. Lacquer does do that, and out of the box, it looks stunning.

It will be ok if it is taken care of. If it is cleaned regularly and not dropped or knocked, it will last a while. However, once the scratches arrive, it is not so good, and cheap lacquer can peel, which is never an attractive look.

The real issue, though is with the valves. Mendini has used Monel pistons and valves, which are a cheaper option, and are also of a lower quality. They can stick and cause problems and need a lot of maintenance.

The valves are an important part of the instrument, obviously. That goes without saying. So be prepared for some cleaning and taking care activity. They do have some nice faux mother-of-pearl tops, which are quite attractive.

Intonation on trumpets can be a problem. Even on the top of the range models. One problem that is common to most trumpets is the flat ‘e’ in the fourth space. This problem exists on this instrument, and it can be corrected by using the 3rd valve slide. It is something players get used to doing. 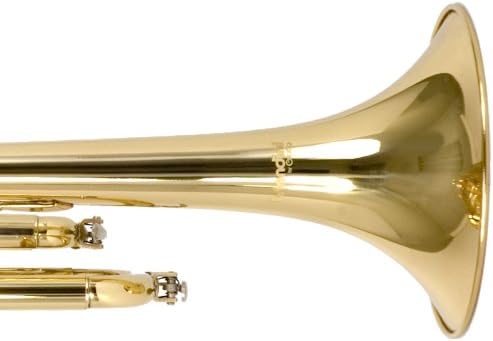 There are other notes that can be a little flat at times. Don’t blame this trumpet; it is common to the vast majority of instruments at all levels.

I think we have discovered with this trumpet that Mendini has produced an instrument that is great for a starter. Well-made, good materials with care taken in its design. There are very few things to be critical about.

The sound is what most people are going to base their judgments on. With this Mendini trumpet, the sound is surprisingly good. Many players and students today prefer a brighter sounding instrument, and this certainly provides that sound. Mendini has included those aspects we have already discussed to assist the young starter to get a decent tone. The bore size means they don’t have to work too hard.

It definitely has a good voice. The player won’t have to work too hard to get a good sound. They will certainly be encouraged by the sound they achieve. The Bell assists by providing a nice warm resonance. For the price point, the sound of this trumpet can only be described as very good,

As we are sure you have already now, most trumpets have an almost identical build. There are sometimes a few very subtle changes in design, but generally, they are all similar. One of those subtle differences is included on this trumpet, though. The valve casing is designed to be a little closer to the mouthpiece than on many other models. 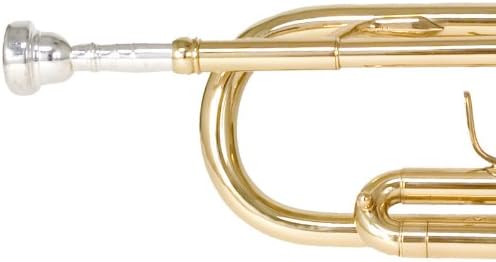 If it is your first instrument, then you won’t notice as you will have nothing to compare it with. However, what it will give you is a good feeling about holding and controlling the trumpet. Otherwise, it is similar to most. Saddles are provided on the first and third valves, which help. These, though, are common to most instruments and not exclusive to this one.

Trumpets are notoriously difficult when you first start, and so patience is required. Mendini has made as many enhancements that are possible to make it easier. The rest is down to the player. It is designed for a starter and may last a little beyond that as they improve. But it is not made for an intermediate player.

It has some nice extras included as part of a package. There is a silver-plated mouthpiece that is sized 7c, a cleaning cloth, and white gloves. They also include a bottle of valve oil; you will be using that quite often, we think. And finally, a nice case. However, it is not a hard case; it is the fabric zipper type. But it is quite sturdy and has a nice padded interior.

If you were to ask us, would it be possible to manufacture a trumpet of this quality at this price we would probably have said unlikely? We are not saying it is perfect, far from it. It has one or two problems which we have mentioned. We will summarise those again, so more on this later, but generally speaking for the money, it is a good buy.

It feels good to hold, is not too heavy and has a nice balance. The valve casing being moved slightly forward definitely helps. It has a good sound, that is a little brighter than some, but that seems to be a trend at the moment. It is reasonably easy to play as far as they are easy in the early days. And it certainly looks the part when it is brand new. All very positive.

This brings us to the first of the potential problems. The finish will deteriorate over time. Lacquer surfaces always do. Some last longer than others, but you must expect it. Taking good care of it will help, of course. Just remember you are not buying a five thousand dollar instrument here.

The second thing is a little more critical, and that is the valves. Monel valves are known to be of lower quality and, therefore, could potentially cause problems. If you get problems, smile sweetly at them and don’t complain. Give them a little drop of oil and a good clean, and they will probably be fine. Joking aside, they are the weak point of this instrument, so you just need to be aware.

A fantastic choice for the beginner…

But let us wrap this up by pointing out one last thing. The price point means this is a budget instrument. It is designed for a beginner. It is not going to perform like a pro trumpet. If you are expecting that, you will be disappointed. But at its price, it is a great trumpet. Not perfect as we have said, but great as a starting point.

We think you will go a long way before you find better value than the Mendini by Cecilio MTT-L Trumpet. 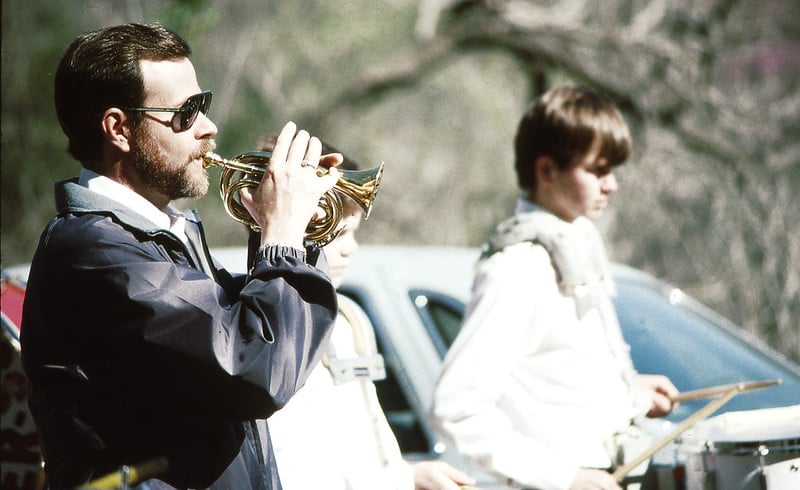 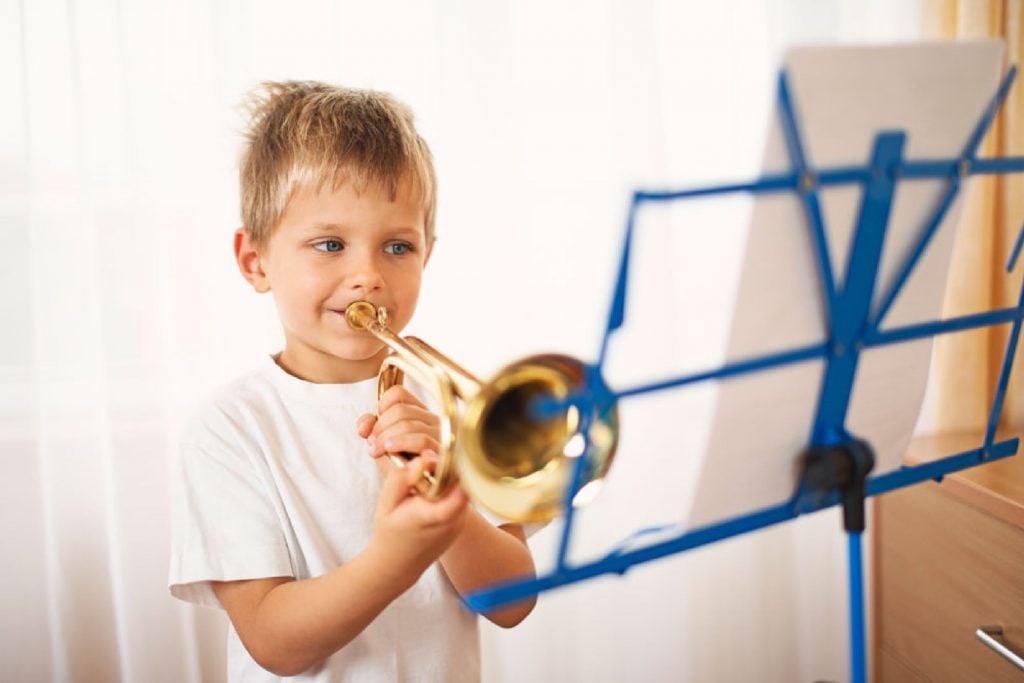 Top 10 Best Student Trumpets You Should Buy In 2022 Reviews 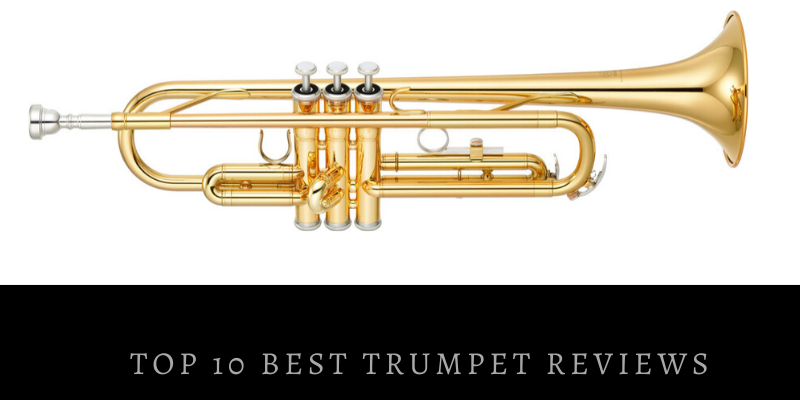