In this JBL Extreme review, we’ll be looking at another speaker in a long line of Wireless speakers that are built to be carried around with us. We have, of course, carried music around with us in one form or another for a long time.

Most of us will remember our transistor radios. To us, a miracle at the time. But they only played what was given to us by the radio stations. We had to listen to what they wanted us to hear. Or, if we are to be cynical, what they were paid to make us hear.

Some engineers from Denmark gave us Bluetooth, and the game plan began to change. Technology went crazy all around us, and within a short period of time, our phone became the radio station as we played our own downloaded playlists.

Now we can go anywhere and do most things with our music. We can even take them into the sea and entertain the fishes if we want. Well, for about half an hour anyway.

Still, though, there is a certain love of picking up our sound machine and going off somewhere and taking your music with you. You can still listen to the radio stations, of course, if you want to. Many people still do. But there isn’t anything quite like ‘our’ music. Our music is accessible through portable Bluetooth speakers.

There are a myriad of choices, all with their own features and, of course, price points. We are going to take a look at one of them — the JBL Xtreme.

Before we do, let’s take a brief look at the company itself…

They have quite a history. JBL still produces quality audio equipment, but it has lost a little bit of its previous kudos. At one point, it was right up there with the best, especially with its speakers. To have JBL or Altec Lansing speakers as they were known in your speaker cabinet, guaranteed a great sound.

JBL began its life in America initially in 1927 but came to prominence in 1946. The company had been created by Mr. James Lansing himself, along with his partner Ken Decker. It grew slowly but was soon recognized as being the manufacturer of quality equipment.

But things didn’t go to plan…

Unfortunately, it went through a period of poor management and the early deaths of both founders. It was the subject of claim and counterclaim. This, of course, affected the quality of the product and the future developments.

Harman International acquired them in 1969, and Harmon themselves were bought out by South Korean giants Samsung. They have some unique claims to fame though that should be recognized. One is that they invented the first Differential drive speaker with Neodymium magnets in 1995.

They take a lower-key these days and are a much more consumer-orientated rather than producing high-end products. Nevertheless, once you have been good, you can usually find a way to keep the traditions.

There is some confusion about where they are manufactured today. Some say Mexico; some say China. Wherever is irrelevant, the quality is good, and so is the sound, and that is all that matters. 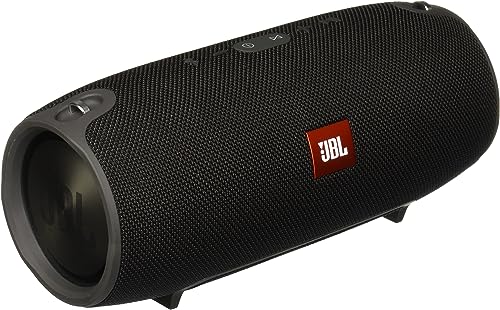 This is a speaker that has been designed to fit with your lifestyle. Whether you want to take it to the beach or the pool or just use it at home. Whatever your choice, it is going to give you what you want when you want it.

It first came out four years ago, which means that if it is still selling today, it must be doing well. It is not the newest model in the Xtreme range, but it is still one that a lot of people prefer.

That is not to say it hasn’t got a few problems and issues, but we can deal with those as we go through this review. So, let’s get to it and take a closer look at the JBL Xtreme…

There is nothing to get excited about the design and build of this speaker. To call it understated is probably an understatement in itself. It has a plastic build that extends to the mesh-like covering. It looks like a metal mesh grille, but that is also plastic. That doesn’t seem to be a problem as it is a good quality plastic. But it certainly would not be as tough as a metal grille if it were dropped.

The only break in the black coloring is the red JBL logo on the front. There are two radiators, one on each end, that are made of rubber. These passive radiators deliver a powerful sound.

It is not the smallest or lightest of portable speakers. It measures 12.5 inches by 8 by 7.5 inches and weighs 4.65 pounds. The speaker is listed by the manufacturer as being splashproof. Unfortunately, we could find no official rating for the Xtreme 1. Though the Xtreme 2 has an IPX7 water-resistant rating.

We would, therefore, suggest that you take care near water. The build does visually look like it might be able to ward off splashes, but without the official rating, we cannot call it splashproof.

At each end of the speaker, located on the top, there are two metal hooks. These are where you can attach the carrying strap if you choose. We don’t think the hooks are the strongest fixing points we have ever seen, but they seem capable of doing the job. The strap itself is an interesting design and almost as thick as a guitar strap. But then the speaker is quite heavy, so maybe you need it.

On the bottom of the speaker is a hard plastic stand with rubber feet. This indicates that JBL wants you to stand the speaker horizontally. As it has passive radiators in each end, it does seem like a good idea. Underneath is also where they have placed the lights displaying battery life and how much is left in the unit.

On the top are the operating controls, but we will be discussing those in another section so more on this later.

Inside there are two 63mm drivers and two 35mm tweeters that provide the sound. It has two USB ports and a 3.5mm Aux-in port built-in.

The rechargeable lithium-ion battery will give you up to 15 hours of playtime and takes 2-3 hours to give a full recharge. And it can be used while it is on a charge. In fact, many have said the sound actually improves when it is charging. 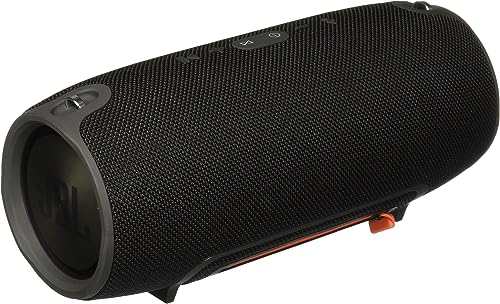 As are all JBL products, this speaker is evidently made in China.

As a design, it is bland and extremely basic. In many ways, it has a strange appeal because of that. But it is well-built and very functional.

So let’s take a look at the controls. Apart from the battery life indicator lights, we mentioned all the controls are placed on the top. The connection points are placed away on the back of the unit, which is a convenient location.

Now unless the design idea is actually to hide the controls to make the unit a bit of fun, we don’t know. If they are there to be used, it hasn’t made their operation particularly easy.

In daylight, they were hard to discern. At night in the dark, you may well need a flashlight. The flashlight is not included as an optional extra with this speaker, by the way. When you have located them, there is a power off and on button and a Bluetooth pairing button. There is also a volume up and down, and a JBL connect control for linking with other JBL speakers.

There is also a play and pause button, which, when tapped, will move you on to the next track. However, there is no facility to return to the previous track, which is a little disappointing.

The controls are basic but adequate, though visually for us anyway, they are disappointing.

The JBL Xtreme is fitted with Bluetooth 4.1 but unfortunately does not have aptX, AAC, LDAC, or any of the better streaming codecs. The connection is quite good, and pairing is easy.

However, it doesn’t seem to like having obstacles in the way which can cause a stutter. That is quite normal, though, with some connections. Three devices, including phones and tablets, can wirelessly connect at the same time. It will connect with other JBL speakers via the JBL Connect button.

Calls are clear and are received with just a touch of a control button. The speaker is echo-canceling, which ensures you can hear clearly.

Other connections located on the back include the 3.5mm aux input we have already mentioned and two USB ports. These are for charging mobile devices.

Let’s return to the sound. There are two passive radiators at each end that deliver a total of 40 watts (2 x 20 watts). Therefore, it is quite a powerful speaker unit, and these do a good job of keeping the low frequencies tight. With only a little bit of overspill into the mids at higher volumes.

Generally speaking, though, the bass sound is good. The bass is very evident in the mix without being too prominent. However, or those that like a big bass sound, it won’t be as loud as some. But then again it won’t disappoint.

The mids are fine despite occasionally being crowded out by the lower frequencies, Vocals are clear and sit neatly in the overall sound.

Now to the top-end…

If the sound has a weak point, it is with the higher frequencies. They can be a little harsh, depending on what sort of music you are listening to. If it involves a lot of cymbals and high-end guitar, it is going to hurt a bit. The speaker is quite loud volume-wise, so you can just turn it down a bit, but that defeats the object of having a louder system.

Generally speaking, the sound of the JBL Xtreme is quite good. A nice bottom end and clear mids. Just a shame about the highs in places at volume. But we suppose at this price point; you can’t have everything, can you?

We a marketplace brimming with quality audio products; the options are numerous. So, if you’re not convinced about the JBL Xtreme, check out our reviews of the Fugoo Sport, the JBL Flip 3, the Ultimate Ears Boom 2, the Harman Kardon Onyx Studio 3, and the Best Bluetooth Speakers with Radio currently available.

Given that there are one or two little problems we have looked at, and another potentially bigger problem we haven’t addressed yet. This is actually a decent speaker with a good sound. However, it is quite heavy to carry around, and the Bluetooth connections can sometimes play a few games when they are turned on.

But, sound-wise, it is quite good and doesn’t disappoint, especially with the low and mid frequencies.

The highs though, are a problem…

There is a lot happening with the DSP in the high frequencies that mean the sound is not as good as it could be. But let’s be clear, it has been a good speaker for a number of years and still is. Some might say it is better value for money than those that were created to succeed it like the Xtreme 2. It is certainly a lot cheaper with virtually the same features.

We mentioned one issue that is a potential problem that we have not mentioned yet. There could be a problem with the reliability of the battery. We are aware of a few examples where it either dies very quickly or doesn’t charge fully. We are sure that these are isolated cases, but there are known problems with battery reliability, so it’s best to be aware of the fact.

The JBL Xtreme is still a very good speaker system. The JBL Xtreme is not perfect by any means. But it still puts out a lot of sounds and generally speaking it is a good sound indeed. Not particularly cheap but at its price point, good value for money all things considered. 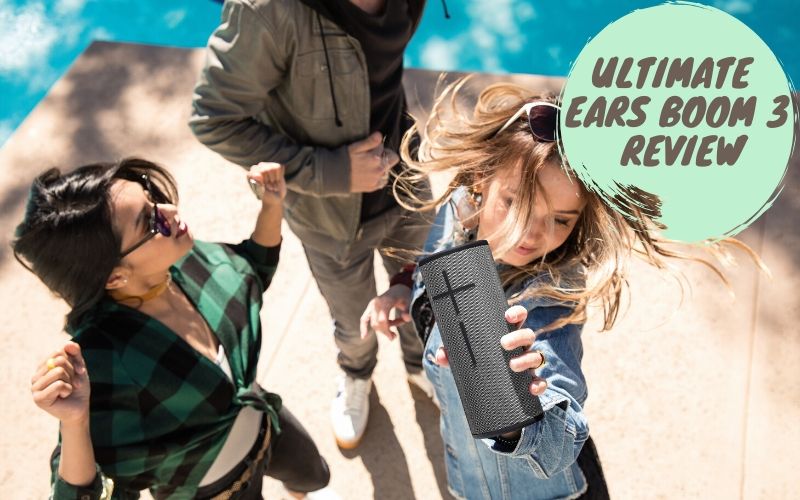 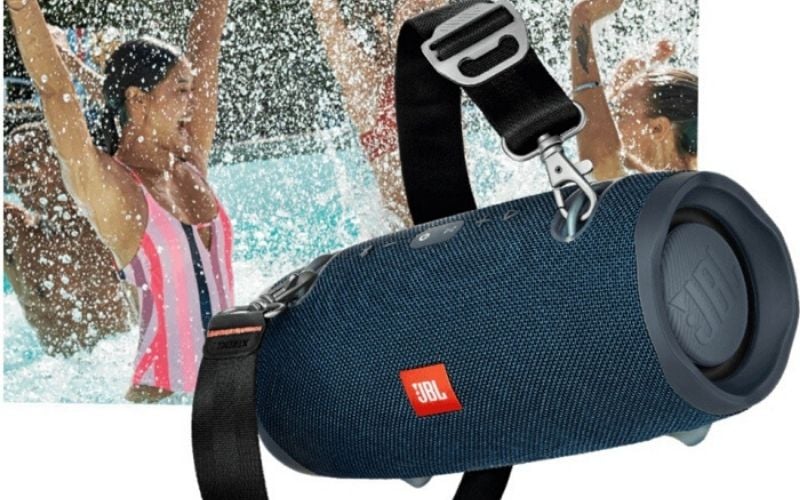 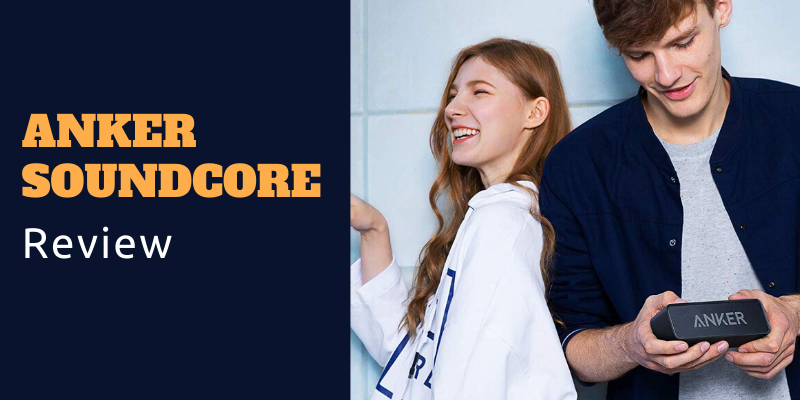