Jameson is not a guitar manufacturer who would be the first name you think of when buying an instrument. But, that is certainly no reason to not have a look at what they are producing.

We recently had a conversation with a guy we have known for years about which guitars he bought and why. We asked him what was the very first thing he looked for in buying another guitar (he has over ten already).

His answer was, “how much is it. What do I have to pay? If it’s cheap, I don’t even bother to look at it, because it means it’s useless.”

We were quite shocked…

…that a pro musician would take that line. After all, in today’s world, there are some good guitars to be had at lower prices. We do understand what he means, but we still believe that price is not always a good measure of quality.

There have been times when you could pay thousands for a ‘name’ instrument that was actually very poor indeed.

Outstanding instruments at a reasonable price…

There have been reviews we have done here when the quality of what shall we say, guitar manufacturers with a lower profile, have produced has been outstanding.

It is true there is some rubbish out there, and quite a lot of it is unplayable.

And it is quite often the case that these are the guitars bought as a first guitar for a young learner which puts them off for life. But there are also some good guitars that fit neatly into a little niche that are really quite good and fulfill a function.

They will never be the most respected instruments and command pages of comment, but for what they have been designed to do they do well and are great value for money.

Let’s take a look at one we think falls into that category, the… 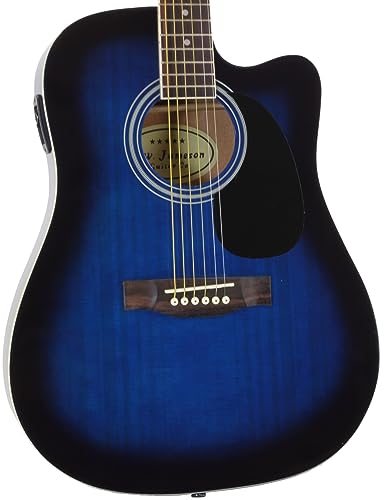 The instrument we saw was the blue finish version, called ‘Blueburst’ a guitar that says quite unashamedly, look at me!

And you have to.

It’s one thing drawing attention to yourself with a flamboyant color scheme, but you have to be able to carry it off. But, more on that a bit later after we have had a chance to look at what it offers.

So, let’s have a closer look at the Jameson Thinline Acoustic-Electric…

They have gone for a body predominately made from Nato wood. Nato is from South East Asia and resembles mahogany, but it isn’t. It is a cheaper alternative, but that is what this guitar is about. If it’s possible to maintain a certain quality, but keep costs down, that is the aim.

It’s not an uncommon wood these days in guitar manufacture, with companies making budget and mid-range guitars.

The Spruce top, though, will add some nice resonance…

It is well made and put together with some attractive white beading along the outer edges and in decor around the soundhole. The thin line gives it a certain style and gives the guitar a nice feel, and the single cutaway allows access up the fingerboard.

The Blueburst color scheme is very prominent, to say the least, and resembles what sunburst would look like if you used blue instead of red and yellow.

The black pickguard finishes off the body design, and it is all actually quite attractive.

It has a maple neck with 20 frets and a Rosewood fingerboard. There are dot inlays in a traditional style all the way up the neck.

The neck is fitted with a truss rod and is a comfortable thickness and not too wide, which lends itself to new players.

Very basic as you would expect but also very functional. Die-cast tuners are fitted, and there is a rosewood bridge.

No complaints from us so far. It is using less expensive materials, but it is put together well and isn’t going to fall apart in your hands.

We really were not expecting too much in terms of its amplification options. But, as we always say, you only get what you pay for.

It is a very basic built-in pickup and a simple control panel giving you a volume and tone control.

It is worth noting that this is a passive pickup so it would work better through a separate preamp or booster, but will still operate straight into an amp.

Acoustically the sound is surprisingly good for a thin line, let alone a budget Thinline guitar. The body is just 3 inches in depth, so it stands to reason you are not going to get the full richness of a full body instrument. The resonances and especially the bottom end just will not be the same.

Having said that, it does very well. There are no booming bass tones, but it sounds quite nice, especially when a fingerpicking style is used. That is when this guitar really did sound very good. 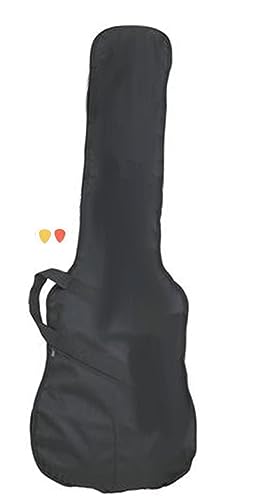 Toppy but in a nice way…

It is a little bit what you might call toppy but in a nice way and it does have a little midrange so you could say the sound is adequate. Certainly, it isn’t a guitar that you would immediately put down because it sounds awful. It does quite well.

We have mentioned the sound when fingerpicked, when strummed with a plectrum, the sound is quite loud, and the top rings out.

Plugged in it lacks a little with a passive pickup but it is still an acceptable sound given you have fairly limited tonal options.

Overall the sound is really quite good for a budget instrument.

So What Do We Think Of The Jameson Guitars Full Size Thinline Acoustic-Electric?

We have to say we are actually quite impressed with this offering given what it costs. It is a good example of what can be achieved by a manufacturer who sets out to provide a good guitar at a very affordable price.

It can be done! And this guitar proves it. Plus, there is one further added benefit we shall mention soon. There is unlikely to be any competition able to produce a guitar as good as this for the money which alone makes it impressive. 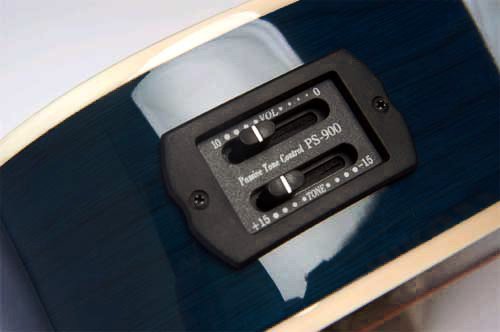 The looks are quite stunning, and certainly one could say eye-catching, and we made the point earlier about being able to carry off a bold visual profile. It certainly does that in just about every way, not only with its looks but in the way that it plays and sounds.

It is well made, with decent materials. And has a very good neck with a truss rod and Rosewood fingerboard. The hardware is basic but very reliable and functional, and the electrics adequate.

The sound acoustically is good. Top end yes, but still ok and it has a certain ring to it that is different from any other cheaper guitar.

Who Might Use The Jameson Guitars Full Size Thinline Acoustic-Electric?

Well, the obvious answer to that is that it would be a very good guitar to learn on. It has a thin line body, so it is lightweight and easy to hold. The neck is nice and not too thick, giving it ease of play and if you want to plug it in, you can.

The hardware is good, so it is going to hold tune as long as you don’t play it too hard.

We could also see it being used by improvers, though, who were looking for a different sound.

Maybe even as a travel guitar…

It is light and being thin line easy to carry around. And it has a nice neck and overall sound, so why not?

As an instrument, it touches quite a few bases and has different options for potential use.

Would We Recommend It?

Absolutely. For the cost, there is unlikely any other guitar that can match its playability and build quality. It isn’t going to win any awards other than for best value perhaps, but it performs a lot better than you might think it is going to.

We have seen toy guitars that have cost almost as much as this instrument and they have been frankly awful and virtually unplayable.

This is not a toy guitar. It is a full-size thin line with a pickup, and it plays very well.

And What Does The Jameson Guitars Full Size Thinline Acoustic-Electric Look Like?

Really very, very good in our opinion. And quite different from most other acoustic-electrics.

We mentioned one other benefit we haven’t mentioned so far…

After providing you with a well-made guitar at an incredible price that added benefit is that it comes with a gig bag and they give you a few picks as well.

Can it actually get any better value for money?

This is a good guitar that is quite outstanding value for money and proves the point that you can’t always judge a product by its price tag.