When you see and hear the Jackson JS Series Dinky Arch Top JS22 DKA, it makes you wonder what was the inspiration to step out of the box and create it?

With changes in musical thought and styles comes a change in the requirements demanded of the instruments. So it was when heavy metal arrived. Black Sabbath are credited with being the first real metal band, driven along by Tony Iommi.

If you take some of the bands that preceded them and just put a heavy overload on the guitar, haven’t you got the same thing?

Iommi played a Fender Strat, but it broke on their very first recording session, so he used ‘Monkey’ instead. That was an SG he had already bought. He never went back to the Strat. But even the heavily distorted Gibson SG wasn’t enough for some, as the heavy metal sound got louder and wilder.

Requirements for the sound of the guitar were changing. Fender and Gibson couldn’t do it to the level that some required. So other companies arrived that could. The makers of the guitar we are covering in this Jackson JS Series Dinky Arch Top JS22 DKA Review, Jackson guitars, were one.

They arrived in 1980 when the excellent Randy Rhoads, Grover Jackson, and a few others sat down to create a very special guitar. The result was a Flying V look alike. During the 80s heyday of ‘metal’, they grew in popularity and esteem. A number of differing Jackson models appeared and were gobbled up by the ‘metalhead’ guitar players of the time.

But music being what it is, nothing lasts forever…

Tastes began to change, and Jackson reverted to also producing cheaper models made overseas. IMC had already bought out Grover Jackson when Fender came knocking in 2002 and bought the now struggling brand. If they had hoped to revive their fortunes, they failed to do so.

Jackson are still highly thought of in certain circles, especially the older US made guitars, but their influence has declined. So, for this review, we are going to take a look at one of the entry-level guitars they now produce to see how good or bad it is?

The Dinky is what is fondly known as a SuperStrat design. Simply put, that means it has a more aggressive double-cutaway look. It has all the looks it should have and bears the hallmarks of some of its illustrious predecessors.

It is called the ‘Dinky’ because it is slightly smaller than a full-size body. About ⅞ of what is generally considered full-size. A nice size for a starter and at eight and a half pounds a nice comfortable weight.

It is given all the styling you would expect to create that 80s sound. A couple of screaming humbuckers and a wider neck for excessive bending. To add a bit of ‘attitude’ the hardware is painted black. So, let’s take a closer look… 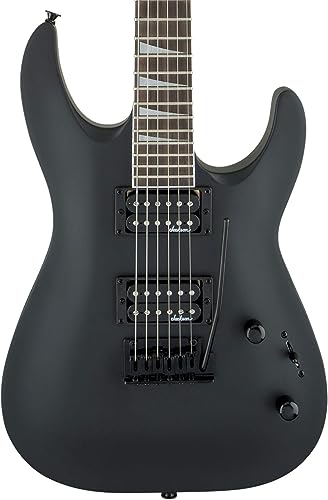 As we have already said, this is what is known as a ‘SuperStrat’ design — made to look like it is a more adventurous version of the non-metal Fender. It has an arched body made from Basswood. Not the strongest choice of tonewoods they could have made, but a lot cheaper than some of the others.

The edges inside the cutaways have some bevels. This is a nice design touch, and it will help when you are letting rip at the 24th fret somewhere.

It is finished in an atmospheric matte black. There are two controls, a tone, and a volume and a slider for pickup selection. There is also a through the body stringing arrangement with the all-important whammy bar. It creates the right image. It looks aggressive – it looks metal! 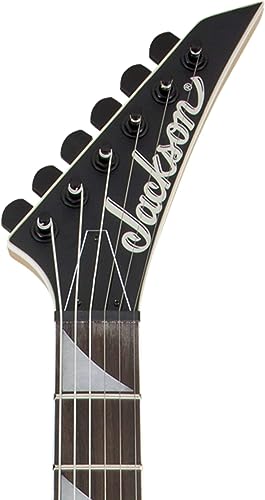 The neck is Maple wood bolt-on with 24 jumbo frets. It has an interesting design in that the fingerboard is quite wide all the way from top to bottom. In fact, it feels as much like an acoustic guitar spacing as it does an electric instrument. It has a bound Amaranth fingerboard with the instantly recognizable shark fin inlays. Amaranth is a hardwood that comes from the forests of Brazil.

The neck is rounded off a little towards the nut. This makes chord playing a little easier. The radius flattens as you come down towards the body. This enables faster runs and more extreme string bends. It certainly is a very slick neck. For stability, the neck is graphite-reinforced.

This is a neck that is designed to be played fast. This guitar is an entry-level instrument for a young player, and as such, the neck feels easy to play. But all the attributes are there in the neck to create the feel of a real ‘metal’ weapon.

Up top is a very Jackson guitars headstock with its pointed, angled shape. There are six closed-back, die-cast Jackson tuners finished in matte black. It is a through-body stringing design with a hardtail bridge and a 2-point tremolo tailpiece. Again, all finishes are in matte black.

It does look quite impressive, but the standards of the hardware is not high. You see the potential, but then see that this is a guitar that needs to be made as cheap as possible.

Does that seem desperate?

We hope not because these types of guitars have a place in music today. Even if the style they were originally created for has slowed down from what it was. 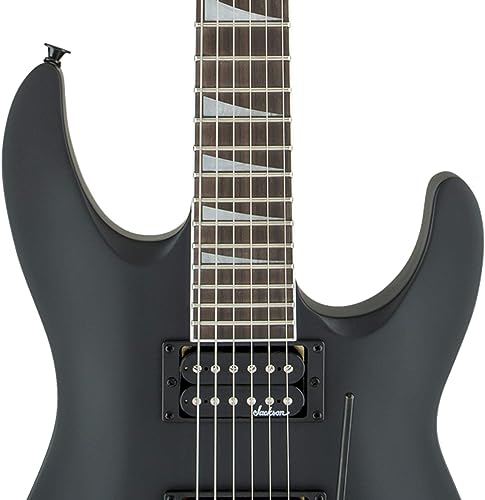 With a metal guitar, the pickups can make it or break it. Here we have two high output, ceramic magnet humbucking pickups. They certainly deliver a pretty solid metal sound and give you plenty of bite. What they give you is a solid, if slightly outdated, metal sound. That is going to please some.

They are not brain-melting, but they are good enough. The starter is going to love them, and that is one of the important things.

The controls are basic but adequate. Each pickup is individually wired up to one volume and one tone control. There is also a pickup selector. They are Jackson pickups, and so they are meant to be hot. This they are and will give you plenty of output if they are lacking a little in tone.

It is designed to play quickly, and it would have to, that is one of the cornerstones of a successful metal guitar. We mentioned before that the fingerboard flattens out a little the further you come up towards the body. With the width of the strings, it makes for a good environment for some speedy soloing, tapping, sweeping, and just about anything else that sounds impressive.

For a beginner, it is going to play nicely. The neck is smooth and wide and allows a lot of space to make the chords they will start out with. The action is quite low, and that will also be a help. As a starter guitar, it has good playability, even if it is a little one-dimensional.

How does it Sound?

As we said, the humbuckers deliver a solid sound with massive sustain. It is going to bite and crunch and do what it is supposed to do in the genre it is most at home in.

The problems will arise when you take it out of its comfort zone. If you try to play clean, you will notice that the sound falls down a little. The clarity suffers as does the note definition. With a good amp, you can probably adjust the sound to make it acceptable. However, a fish out of water might be the best way of describing it.

We must remember, though, this is a budget range guitar. If you compare it to similarly priced opposition, it is good, and you should have no complaints. We should not be expecting it to compete with much higher priced instruments.

If so, check out our comprehensive reviews of the Best Electric Guitar for Beginners, the Best Blues Guitars, and the Best Hollow Semi Hollow Guitars currently available.

Or if you are not a beginner and what something incredibly metal, then take a look at our reviews of the Schecter C1 Platinum, the Ibanez GRX70QA, our EMG JH James Hetfield Set review, and the Best 8 String Guitars you can buy.

What do we think?
Let us lay our cards on the table with this one. It is not a great guitar by any means. But for the price point, it is a very good guitar. Does it fit the bill? Just look at it. It snarls at you with its all-black finish. Even the shark fin inlays feel threatening. It’s got the look. Confrontational is the word to describe it. It has an attitude, and it has plenty of it. 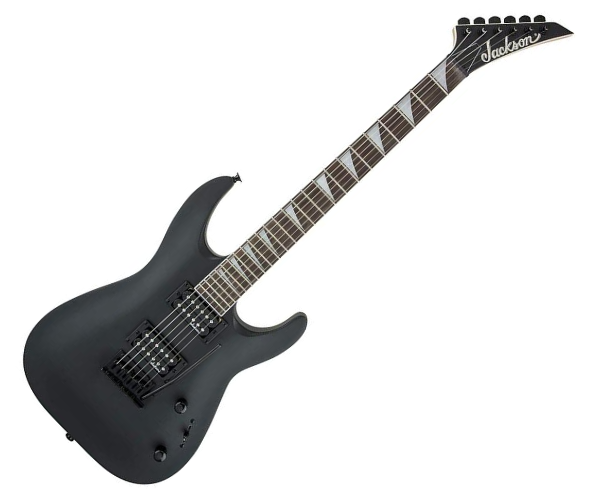 It looks good and has a decent sound. And it is well made with adequate hardware. It is going to impress the market it is designed for – the starter and improver. Some might think it is a bit outdated, but the kids are gonna love it.

For the money, and in its genre, this is a super little guitar.