Whether you’re a drummer or an engineer, knowing how to mic drums is a skill that will get you the admiration and possibly envy of your peers. While drummers often have an idea of how they want their kits to sound, engineers usually have a different idea of what will sound good in the mix. This can lead to disagreements and a lot of time-wasting in the studio.

Enter a compromise – using a limited number of mics for the drums.

This way, the general sound of the kit will be a lot like what the drummer hears, but the engineer still has some control over levels during mixing. Knowing how to record a drum set with 2-3 microphones can get you a special sound that might be exactly what you’re looking for.

Why Record Drums with Just 2-3 Mics?

In the past, knowing how to record drums with 2-3 microphones wasn’t some sort of classic or minimalist approach. It’s often all they had due to the limited number of tracks available on 8 or 16 track tape machines! Some classic tracks were recorded with even just a single mic. But they do suffer from both “roominess” and a lack of definition.

These days, isolating each piece of the drum kit with as little bleed as possible can give you the ultimate flexibility when mixing down. However, this technique can often feel too sterile for many drummers and doesn’t capture the unique sound of a full kit being battered all at once.

Reducing this isolation also lets you get the sound of the room the drums are being played in. This can create a very different feeling and a fuller sound for the drum kit.

More reasons to use fewer mics…

Another benefit of recording with a limited number of mics is that microphones and stands can get in the way. Even with tiny condenser mics that clip onto your rims, they can still be a hazard. Hitting a mic during a recording session means starting all over again. The fewer you use, the less chance the drummer’s playing will be impeded by the mics.

Of course, the main reason why people record a drum kit with 2-3 mics is probably financial. For home studio tinkerers and self-made YouTubers, a set of 10-15 professional drum mics costing hundreds if not thousands of dollars each just isn’t in the cards. Then you’ll need a preamp for each and every one of them, plus an interface that can handle that many analog inputs, plus cables, and the list goes on…

Sure, you can get some pretty cheap microphones. But for the quality of the sound you’re going to get, why bother?

It makes more sense to invest in 2-3 very good mics. Plus, they can be used for other instruments after you have your drum tracks down. 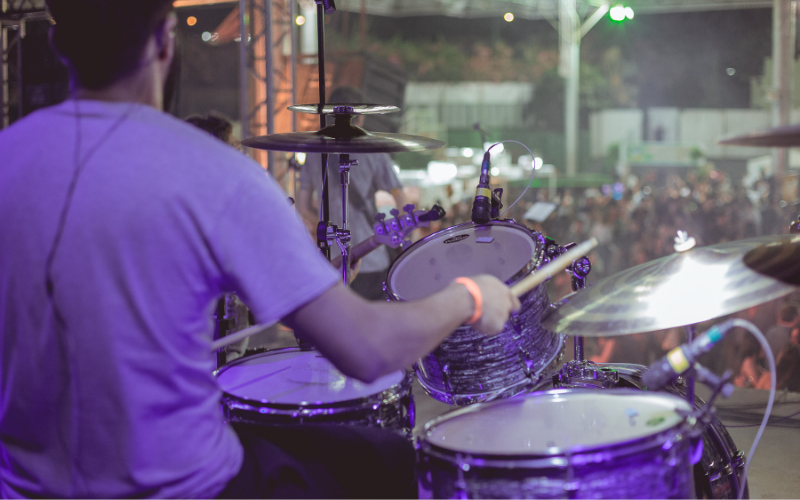 The French don’t know what that means, but it still sounds pretty sexy. If you want to get the sound of a drum kit down on just three tracks, two pretty standard drum kit recording setups can help you do it. So, here’s how to record a drum set with 2-3 microphones.

Two Overheads and one Front of Kit

This setup takes advantage of a surround-sound approach to the drum kit. The front kick mic is typically set up about two feet back from the bass drum (away from the drummer) and about three to four feet high. You’ll want to use a large-diaphragm condenser, such as the AKG C3000, to get a picture of the whole kit.

From the booming lows of your kick drum to the bright splashes and crashes of cymbals. This is going to be an important microphone in your setup, so it’s worth an investment. Luckily, this condenser can also do double duty as a vocal mic.

For the two overheads…

The standard positioning is to have them on either side of the drummer’s head but out of the way enough to allow for some sonic movement. So you’ll normally find them equally distant from the snare anywhere between two and four feet above the level of the drum.

Generally, you’d use two cardioid condensers here. Something like the moderately expensive but excellent Sennheiser e914 or Shure SM81. If you go up to the pro level, you could also check out a pair of top-end Neuman KM184s, but don’t expect to have much money left over.

However, your two overhead mics may give you some problems with phase. Therefore, it’s important to have them spaced very evenly. Measure the distance from the center of the snare to the front of each microphone on either side accurately to keep it clear. I usually go for around 48 inches, but that can vary depending on the sound I am after.

This setup is a bit different. It focuses less on the drum kit as an organic whole and more on a deep, kick-driven sound. You can still use two cardioid condensers for the overheads. Although you may want to raise them a bit to get more of the front-side sounds of your kit in there, like the rack toms.

For a bass drum mic, the difference is a matter of taste…

You can get a great all-around bass drum mic like the excellent and affordable AKG D112 or the Shure Beta 52A to deliver great mid and low frequencies from the kick. If you want to go deep into a tremendous booming sound, you can even move to a Solomon LoFReQ, but this will produce a lot of sub-bass frequencies which may not be for everyone.

It picks up an isolated low-end of your bass drum but doesn’t help you to capture anything else. And even misses out on some of the mid-range overtones a boomy kick drum can have.

What you get with this setup is a tighter sound that’s less roomy and warm than with the first front of kit setup. The trade-off is that you get excellent control of your bass drum, and if this is what your song or style focuses on, this approach can be a great option.

Get creative with your setup…

Especially in large or unusually shaped recording spaces. You could use two overheads and a third mic halfway across the room to get an interesting ambiance that might be great on some tracks. Just think of the sound you want and experiment until you can produce it.

And Then There Were Two… 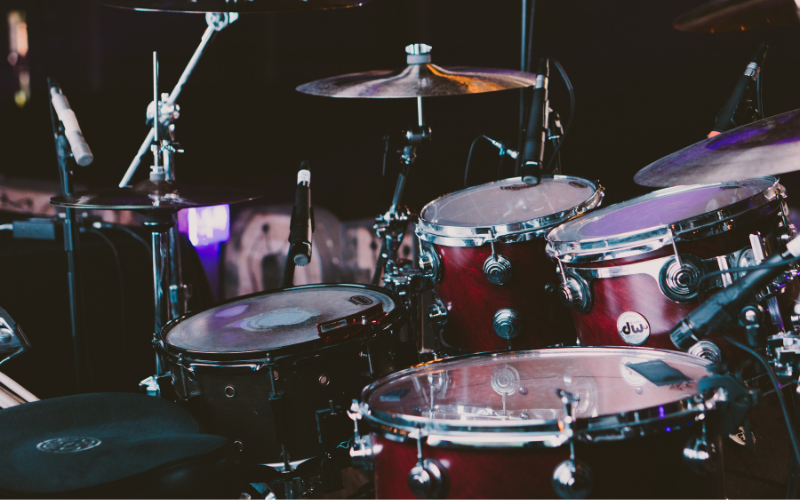 Let’s step down a bit to just two mics. I know this sounds like a huge challenge, but it has been done before and quite successfully, too. With fewer microphones, you actually get more possibilities because you can literally put them anywhere and space them really close or really far apart. Here are three of the 2 mic drum recording setups I like the best.

One Front of Kit and One Snare Mic

The snare mic is used to give that drum a bit more boost and a whole lot more detail. You might want to crank the snare, so it comes through bold and proud in the mix. Or you want to emphasize the detail of technical snare work, like brushwork and delicate rolls.

Either way, this setup gives you the control to do it. You can use a cardioid dynamic clip-on mic here for a brighter sound, something like the Sennheiser E604.

One Bass Drum and One Drummer’s Position Mic

For something completely different, you can mix a drummer’s position or drummer’s perspective mic with a kick drum mic. Having a cardioid condenser behind and near the drummer’s head picks up a lot of the attack that the drummer normally hears. In other words, the drummer will be happy! You get detail here, but you miss out on the boom of the bass.

That’s why your second mic would be on the bass drum. This way, you can get a fairly natural-sounding mix of the whole kit. Plus, boost the bass to make it a bigger and fuller sound.

One Overhead and One Drummer’s Position Mic (Glyn Johns Technique)

Glyn Johns is legendary for getting the awesome sound of Led Zepplin drums. Okay, Bonzo had a fair bit to do with that, too. But Glyn Johns came up with this great drum mic recording technique by accident, and it sounded great.

The first mic is set at the drummer’s perspective, at about the height, and slightly over from the drummer’s head. This gives a good overall sound and lots of attack, which I discussed earlier. But you do lose out on the kick drum and sometimes the snare as well.

So Glyn Johns used a second overhead mic set out past the floor tom and pointing down towards the snare and beater head of the bass drum. Using a pair of cardioid condensers for both these positions, you can get more control over the snare-bass combo within the overall sound. Try to keep the two mics an equal distance from the snare so that it is in the center of your mix.

This has been a basic overview on recording a drum set with 2-3 microphones. We’re looked at some of the more commonly used setups, including the positions of the mics and the types of mics used. This should give you ideas on how you can control and manipulate the drum set’s sound to get the quality of mix that you’re looking for.

With a small set of two or three relatively high-quality drum microphones and a decent space, you can achieve some professional results. So good luck, and enjoy experimenting and find the sound you’re looking for! 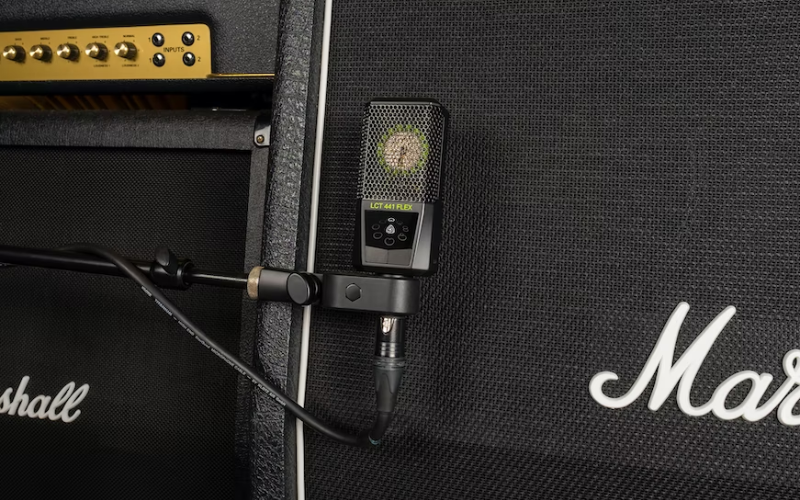 Where Is The Microphone on a Macbook Air? 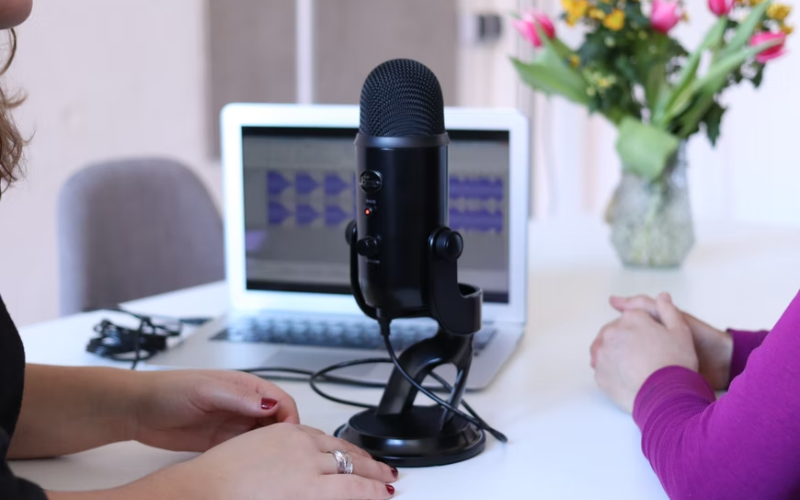 How To Reduce Background Noise on a Blue Yeti Mic?