Home » Ukulele » How to play “Riptide” on Ukulele

Some songs and instruments match each other perfectly, don’t they? Tears in Heaven never sounds better than when played on an acoustic guitar. And what would Tiny Dancer be without the charming tinkling of the ivories?

The same goes for Riptide and the mighty ukulele! Sure, the track features a couple of guitars too, but the uke really shines in this song. Its jaunty jangling strings are the ideal accompaniment for this upbeat, cheery melody.

And good news! Not only does it sound great, but it’s also pretty easy to play as well. So, read on, and discover how to play “Riptide” on ukulele.

Background on the Song and Artist

Who is Vance Joy?

Born James Gabriel Keogh, Vance Joy is a singer-songwriter hailing from Melbourne, Australia. As a teenager, he was an Australian rules football player with a great deal of potential and was tipped to become a professional in later life. However, the call of the muse was too strong, and eventually, he put down the ball and picked up the ukulele.

In 2013, he released his first album, and its second single, “Riptide,” became an instant classic. It quickly rose through the charts to become a worldwide hit, even going five times platinum in America. Vance Joy became a household name, with critics and listeners alike drawing comparisons to the late, great Jeff Buckley.

I was scared of pretty girls and starting conversations…

Aren’t we all, Mr. Joy? There lies part of the great appeal of this little ditty. Its lyrics are so relatable to many of us out there. Combined with the catchy melody, it’s easy to see how the song Riptide became so popular so quickly.

It’s the true definition of feel-good music. As the renowned journalist Hannah Gilchrist said, “It feels like you should be sitting on a California beach drinking a bottle of beer while your friends frolic in the waves.”

The Ukulele Chords for Riptide 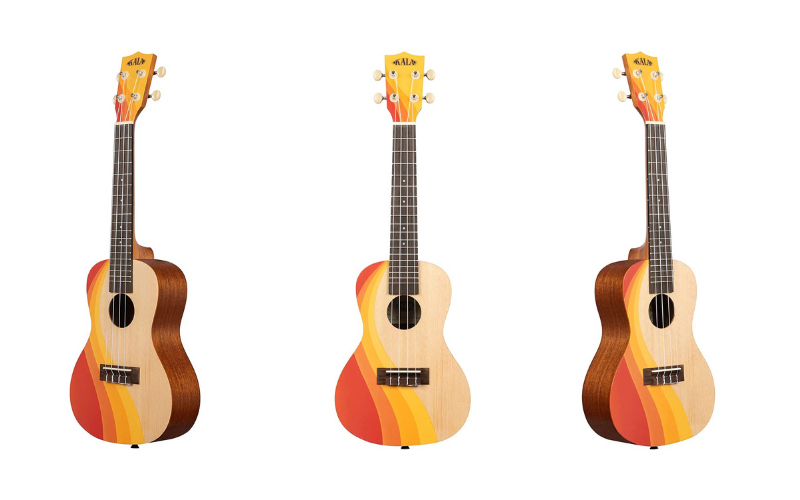 This is a pretty basic tune. You just need three chords, to begin with. They’re A-minor, G, and everyone’s favorite easy chord, C. It starts simply. Begin with the A-minor. The easiest way to play that is with just one finger on the fourth string (the one closest to your face) at the second fret.

From there, we move on to a G chord, which is a little more complicated. Using your index and second fingers, place them on the first and third strings at the second fret. Then your third finger goes on the second string at the third fret.

And then wrap it up nicely with the C. This is the first ukulele chord most players learn. Just pop a finger on the first string at the third fret, and there you have it.

Don’t panic. There are plenty of great resources out there to help you, such as this Hal Leonard Ukulele Chord Finder. With over 1000 easy-to-read diagrams, it’s an awesome way to learn ukulele basics as well as to discover different ways to play your favorite chords.

You might need it because when it comes to the bridge, there are a couple of less widely used chords. For this part, you need to learn a Gsus4 and a Fadd9. 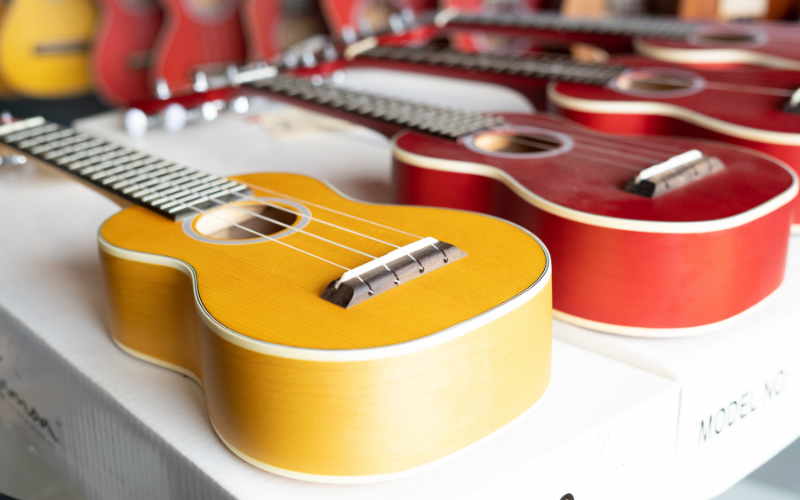 If you want to know how to play “Riptide” on ukulele like the original, then you’ll need to do both. It’s fairly straightforward, though, with most of the song played using a strumming pattern. There’s just one small section before the bridge that contains some finger-picking.

This is quite a repetitive song. The pattern for strumming stays the same most of the way through. It’s a basic down, down, up, down, and then back up again before repeating over and over again.

The picking is a little more complicated. But the goods news is that it doesn’t change chords, so you only need to think about what one hand is doing.

Try resting your thumb on the fourth string and your first three fingers on the others to find a sequence that works well for you. Remember to start simple, as you can always make it more complicated when you’ve got the hang of it.

If you’re new to picking, it can be quite sore at first. That’s where an awesome set of pics come in handy, like this Yeshone option. The 15 different tips sit directly on the ends of your finger to make picking a piece of cake. And they even come in a variety of metals and plastics, allowing the player to adjust the sound.

The Structure of Riptide on the Ukulele

A-minor, G, C in 4/4 time. For the verses and the chorus, that’s all you need to know. The form stays the same, more or less all the way through.

However, when it comes to the bridge, we need to change things up a bit. Before it starts, that’s where that short finger-picking riff goes. Then, it’s A-minor, Gsus4, G, C Fadd9 repeated once. After that, it’s back to the original structure.

Even the best songs can sound terrible if the instrument is out of tune. A bum note can spoil a performance. That’s why every player needs a great electric tuner.

This Fender FT-2 Professional Clip-on Tuner should do the trick. The well-respected Fender brand is iconic in the world of rock n roll, and this tuner certainly lives up to their reputation being highly accurate. It fits neatly onto the head of the uke, providing a quick and easy way to tune a ukulele.

And if you’re going to play Riptide on ukulele, you’ll need the perfect instrument too. Well, look no further than this Kala Swell Concert Ukulele. Vance Joy himself always sticks to Kala ukes, and with its stunning retro finish, it’s an excellent choice for strumming this happy little song on the beach.

Looking for a great new Ukulele?

You may also enjoy our handy guides on How to Play Ukulele, How to Tune a Ukulele, Famous Ukulele Songs You Can Learn, and How to play “Hallelujah” by Leonard Cohen on Ukulele for more helpful information.

How to play “Riptide” on Ukulele – Conclusion

Riptide is one of the best songs to learn to play on the ukulele because it is so much fun. Whether you’re a beginner or more advanced, it’s sure to bring a smile to the face of any player. It’s almost impossible to be unhappy when performing this little ditty.

And thanks to its repetitiveness, it’s a fantastic choice for honing your skills. Doing the same thing over and over again is the best way to achieve perfection, and this song certainly does that. Plus, it’s got the short finger-picking riff in there, for those looking to add some more difficulty to their playing. 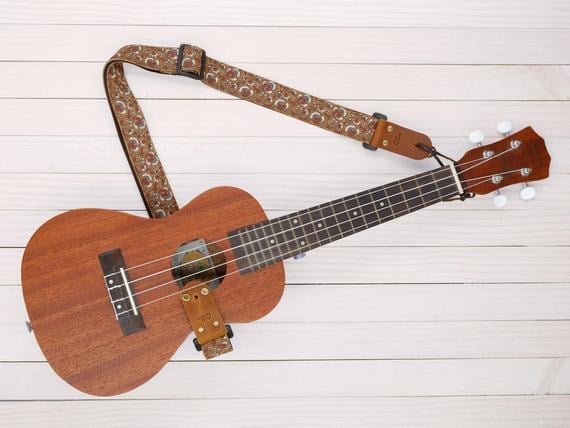 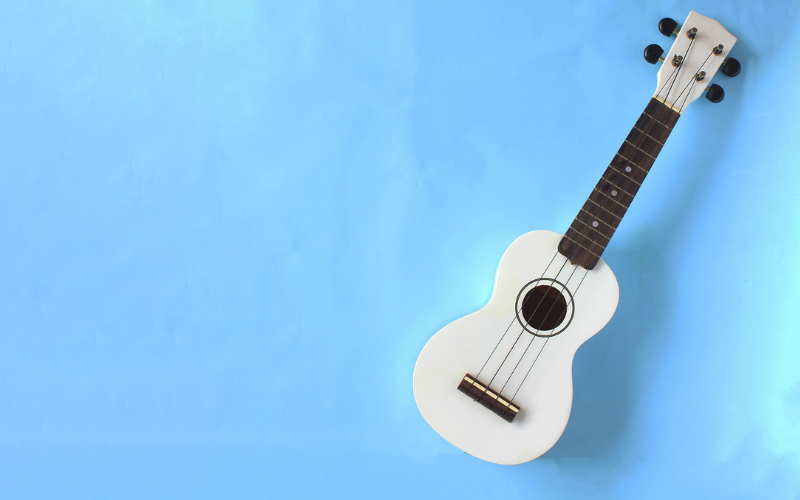 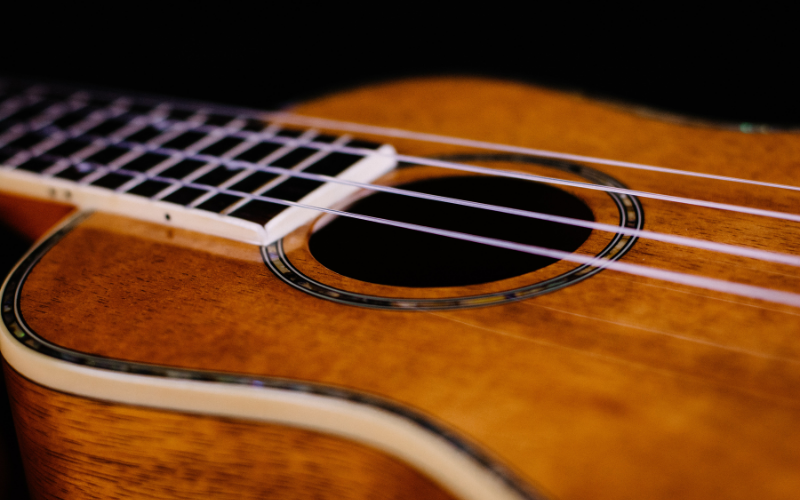