Before I start my Guild D20 Review, I should mention that Guild is a name that resonates with me personally. It is mentioned in almost hushed tones. The reason for this is that many, many years ago, there was a guitar player who was popular in the UK called Bert Weedon.

He came on the TV one night, and I announced that was what we wanted to do as a career, he was playing a Guild guitar.

He played other guitars as well during his long career. But that was the name that stuck in my mind. I had a picture of him on the wall with it. From that day, I always wanted one. Never happened, of course, I couldn’t afford it. A few years later, when I could have bought one, a Fender bass knocked on the door, and the rest, as they say, is history.

Guild guitars achieved a great standing. Muddy Waters and Buddy Guy both played them at some point. Duane Eddy joined Bert as a solo player in the ‘pop’ world, and of course, Richie Havens opened Woodstock using one. And here is a bit of insider knowledge… Jimi Hendrix had a left-handed F212, but don’t tell Fender!

Speaking of the devil, Fender purchased Guild in 1995, which probably sounded the death knell. Most things that Fender and Gibson bought were disasters. What a mess they both made of things and largely still do.

We wouldn’t say Guild disappeared. But after having made guitars for some well-known players and up until the rise of heavy metal produced some great instruments, but then, it did go a bit quiet.

About the time, Fender acquired them and sent the manufacturing overseas. Mmmm. They are now owned by Cordoba guitars, and the manufacturing has returned to California. In a nostalgic way, they have come home.

Smiling down on him…

In 2002 I had a bit of a ‘flashback.’ At the ‘Concert for George’ at the Royal Albert Hall in London 2002, Tom Petty marched on to the stage to do his bit. He had a Guild 12-string guitar. Bert, who had been a big influence on the young Beatle, would have been very pleased.

One of the first guitars produced by Guild from their factory in Rhode Island was the D-25 acoustic. It was highly thought of. The D-20 is today’s version of the same guitar that rolled off the production line in 1967. Have they stuck close to the roots of this instrument? Or tried to be clever like a couple of other manufacturers we shan’t mention (again) and messed it up? 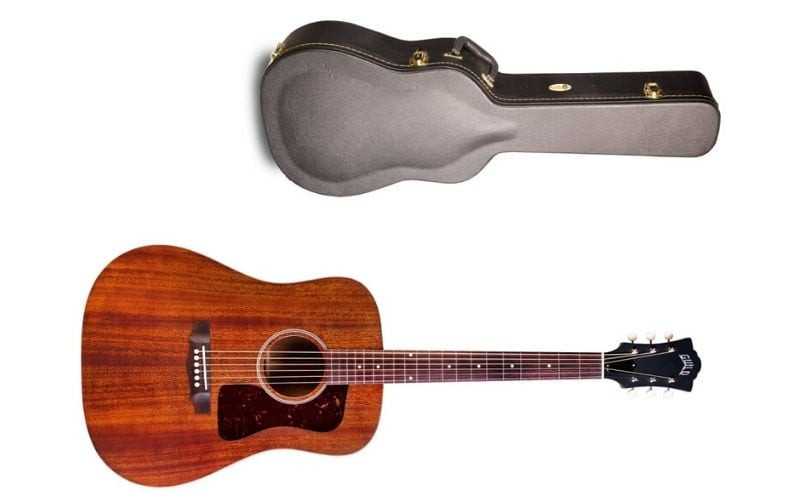 This guitar coincided with manufacturing being returned from overseas. Many of the machine tools and the same materials have been used from the original factory.

Yes, it sounds very much the same. They have not cut any corners from the all-wood mahogany body and neck, producing a great low end, to the fittings. The company have attempted to produce a guitar to compete with some of the best. But, they haven’t just managed to do that, I think they might have beaten them.

First made available in 1967, the D-25 Dreadnought design featured a solid Mahogany top, back, and sides. The D-20 has inherited that format. No laminates, just solid wood, chosen for its tonal resonance. Spruce and Mahogany are the favored choice of many manufacturers, and the combination can sound very good. However, an all-Mahogany body delivers a warmer, richer sound with less top.

This is a no cutaway Dreadnought, which is one of the most popular designs amongst flat top acoustics. It has a larger size of body and depth, which pushes the lower frequencies because there is a lot of air being moved. 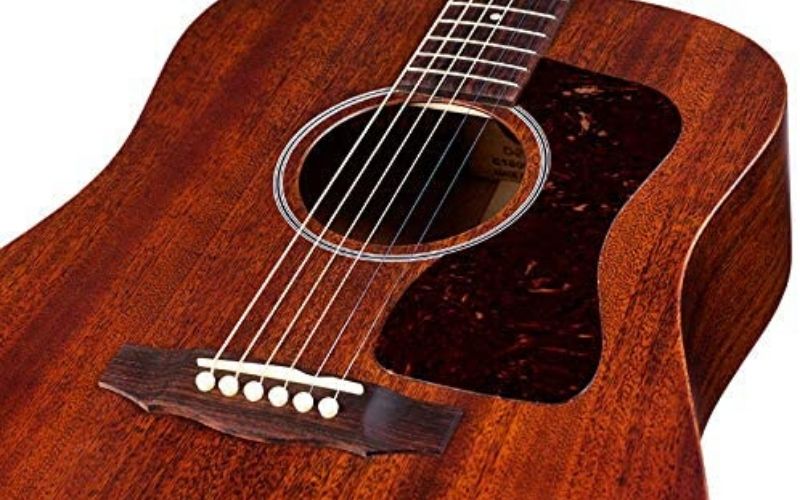 Good wood needs good bracing to complete the design features, and Guild has opted for the scalloped X brace system. This is a technique for bracing that involves shaving wood from the middle of the brace and helps to create a good resonance and strengthen the soundboard.

In doing so, it doesn’t prevent it from reverberating as it must. This is a system used by Martin guitars on their famous vintage models before 1940.

Impressive in every way…

The wood is plain and has a satin varnish finish that is not applied too thickly. This is to ensure resonance from the Mahogany top wood and allow vibration. It is a very impressive build and look, with the grain of the Mahogany showing through.

There is very little in the way of appointments on the body. A gentle, simple rosette around the soundhole and a tortoiseshell scratchplate is all you get. Does it need more? Not unless you want to ruin what is an elegant vintage look.

Here we find more solid wood mahogany on the 25⅝” scale neck. Having a Mahogany neck means it will soak up a little of the sound. This, in itself, creates a different sound to another wood like Maple.

It is fitted with a Rosewood fingerboard and has a ‘C’ shape styling. The choice of a Rosewood fingerboard is common, especially among high-end instruments. The reason is that it also contributes to the harmonic overtones of the sound. It is a standard size neck with a nut width of 1 3/4 inches. There are 20 frets, but only 14 are playable with ease due to there being no cutaway. 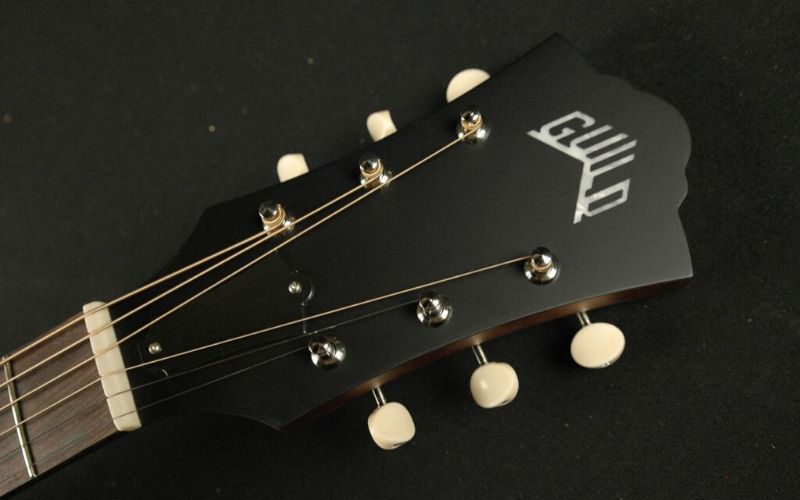 Another process in manufacturing which is often ignored is the way the neck actually fits to the body. Electric guitars are in the main bolted, but with acoustics, it is difficult to do that. Some Taylor guitars though, do have bolt-on necks.

However, the jointing has an effect. The D-20 is fitted with a dovetail neck joint that is hand-fitted. It is quite a time-consuming process, but a lot of luthiers will say it gives a more traditional tone and resonance to the guitar.

Continuing with the excellence of materials and fittings, the headstock has a black fiber overlay. The Guild logo is inlaid mother-of-pearl. There are six Guild open-gear original style machine heads in a three by three formation and a bone nut. Further down, there is a rosewood bridge, again selected with overall tones in mind and a bone saddle. 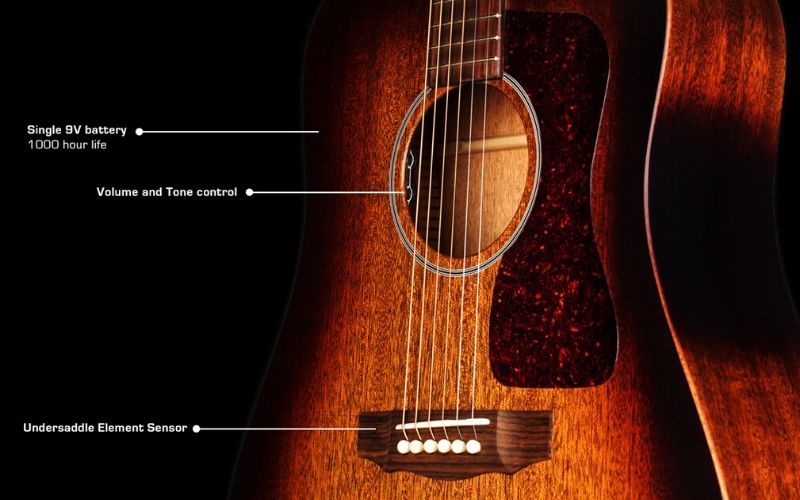 It is down here that you will find the only plastic. Shock, horror, some might say. However, I am sure that having plastic pins won’t affect the sound at all. The critical area is where the vibrating string meets the guitar, and that first point is the bridge. Rosewood and bone will be fine. The pins will not affect that.

An eye on quality…

When you are trying to make a good sound, there is a lot to consider. It is often those things that some consider less important that make the difference. The wood used for the bridge is an example as is using bone for the nut and saddle. You cannot get better quality. It certainly improves your chances of creating a great sounding instrument.

How Does It Play & Sound?

This is a difficult area to quantify. What suits one player will not suit another. Even the size of an individual’s fingers can have an impact. Ease of playing comes largely from technique, but it can be affected by the physical attributes of the player. If you are asking how it plays for an average person, then the answer would be, beautifully.

The neck has a nice ‘C’ shape and feels comfortable. The neck isn’t too wide, as is sometimes the case with a Dreadnought, especially at the nut. So chord playing is easy and smooth. It is a comfortable guitar to play, bearing in mind the Dreadnought design makes it a large size to hold. 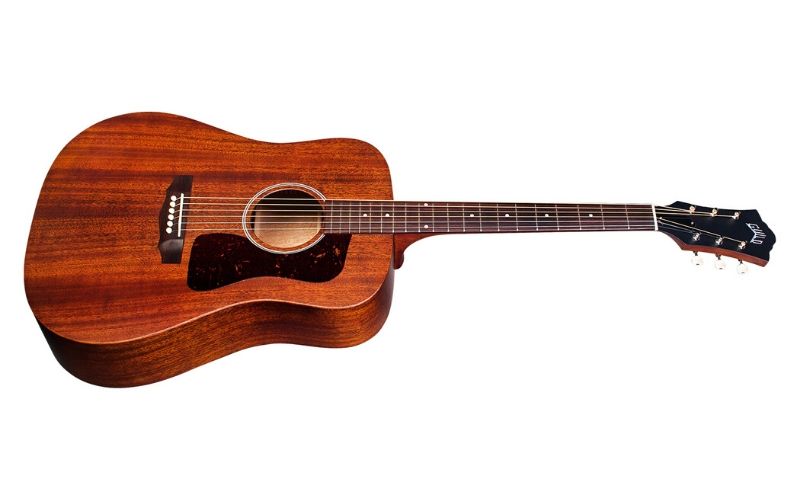 It covers a range of genres, of course, but still sounds exceptional in all of them. In fingerpicking style, there’s a sweetness, generated by the mahogany top. With a Spruce soundboard snapping the top strings can be a bit overwhelming. Not with this.

The thumb on the bass notes stays at a similar volume, and the tops are nice and well, toppy! Nothing overlaps anything else, and it has a balance of frequencies and loudness. Never easy to achieve on a Dreadnought, which isn’t always noted for its finger-picking prowess.

When you strum it, you get the full value of the Mahogany as a soundboard. Rich and warm, it takes away the sometimes sharp top edge that Spruce can deliver. The frequencies are balanced, and it is loud.

Even when you put the Capo on, it still sounds sweet enough. And then you start to strum, and you suddenly realize you don’t want to put it down. It’s one of those guitars that when you first get it, you will lay it beside the bed after a night’s playing and wake up every two hours. Just to see if it is ok.

It is the all-Mahogany build that makes it sound so good and project the sound wonderfully. It is just different from a Spruce top. Not better necessarily depending on your taste. Just different.

If you close your eyes and hear someone play it, you would easily accept this was a vintage guitar. It sounds like it has matured woods and the tones that they bring. The sound is full and rounded, but most importantly, it is balanced. Any more we can add? Yes. it is good, very good.

If so, and you’re looking to spend considerably less than you would on this Guild, then check out our reviews of the Best Acoustic Guitars under 500 Dollars.

But whatever you choose, you will need a few sets of the Best Acoustic Guitar Strings.

This is a six-string Dreadnought that actually is built to ‘vintage’ specifications. I hear a lot about that. This is vintage this or vintage that. I know the two main culprits, as I’m sure, do you. If they hadn’t been such know-it-alls, they’d have left their best guitars, and they both had them, alone.

Guild has recreated that easily because it was still there on the drawing board. They didn’t have to recreate anything vintage with this. It just is.

They have considered and applied most things. The good woods, the thin layers of satin finish allowing the woods to vibrate freely. They have kept the design minimalistic and real, and it pays off.

We were fortunate enough to be able to hear it up against its only competitor at this price point, the mighty Martin D-15M. They sound different, it is true, and that will be a personal thing. But we would choose the Guild for its warmth and richness of sound. There is nothing else at this price point that can compete with this guitar, nothing at all.

We often hear about manufacturers having ‘eras’ where the guitars were good for a period. We only hear about that because they were poor at other times. Guild, unlike Martin and Gibson, hasn’t had a number of ‘bad’ periods.

There was the time when Fender sent the manufacturing overseas, but Cordoba bought Guild and brought it back to its home. They haven’t really had a ‘bad era.’ Any era of a Guild is considered pretty good.

This is a superlative guitar. For what it is, it isn’t expensive and shows what can be done when a major manufacturer gets it right.

Each D-20 has a numbered certificate of authenticity and comes with a hard case.

To find out more about Art and our other writers, take a look at our About Us page.