It is not difficult to put forth an argument saying that Fender has lost its way. It is easy to pinpoint the moment when that happened. 1965, in the eyes of many. Before that, Leo had created a name for himself. A magical name. The Fender Pro Junior IV is an attempt to recapture some of that magic.

For 19 years, after ‘65, the company changed direction more times than can be imagined. Of course, there are arguments about the quality of what was produced. But for those that had the experience of it, it wasn’t funny.

In 1985 the company was wrestled back. Back into the hands of a group of people who had a vague idea of which end to plug a guitar in. The Schultz days improved things, but it has never been the same.

The ‘Fender’ days are gone. Beaten out of sight in their range of amps by Marshall, Orange, and HiWatt. And then Gibson with their noisy humbuckers didn’t help the guitar range either.

Martin, Taylor, and Yamaha, and of course Epiphone and Gibson, confined Fender’s acoustic efforts to also-rans.

What is left? Not much.

Great players have played Telecasters and the Strats along with Precision and the Jazz basses. Some still do. You know the ones. Those that don’t need more pedals than they have frets to sound good.

You just know when you hear a pre-64 Fender. There is nothing else quite like it. Nothing. We doubt anything ever will be.

We are going to look at this latest Fender reincarnation. Can it go anywhere near achieving what the name Fender once meant? 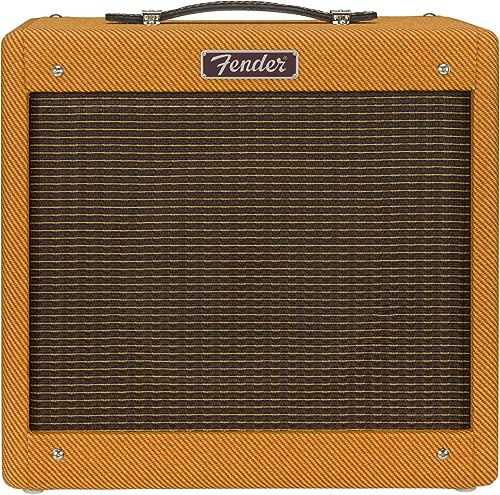 Your first look fills you with dread. You could put this in your suitcase. Small, limited option controls, and a relatively small speaker. A fascia so dated it looks like a museum piece and a name badge design we don’t even remember. But then you stop.

While it has a vintage kind of look on the inside, the circuitry has evolved in this 4th edition. It needs to have punch and drive and needs to push on a bit even though it is only 15 watts.

Can it do that?

The facade might take us ‘Back to the Future,’ but the sound has got to be there. Looks mean nothing without performance.

You turn it on for the first time and are surprised. Maybe Fender, who has got so many things wrong recently, has got this right. Maybe for a change, we are going to be enthusiastic about something that bears Leo’s name.

The red light on top of the amp is burning bright. It sits there like there is something inside that wants to escape. You get the feeling that it is ready for some Buddy Holly or a few dozen others.

So, let’s get a little closer and find out… 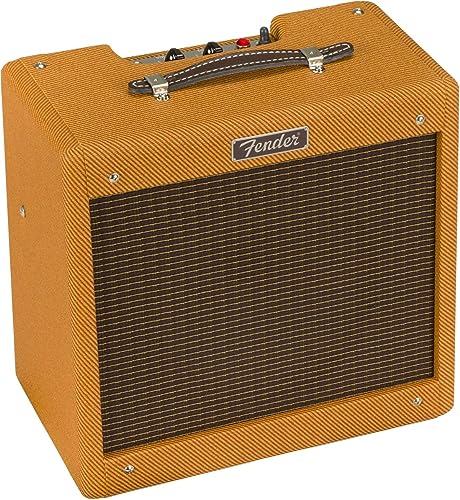 Nothing extraordinary to report in the build. The cabinet is made from particleboard and quite secure. It is quite a compact size measuring 17.00 by 17.00 by 10.00 inches and weighing 20 pounds. Almost suitcase-size.

It has four chrome button feet. The logo isn’t the usual format we are used to seeing today. And certainly not the one that Fender decided to put on what we can only describe as the cheapo Mustang series.

This is a logo very much from the early days, in the 50s, before the really iconic design took over. A style that is going to appeal to those who like some nostalgia. Whether they can remember it or not.

Drawing from the past…

The cabinet itself has been given the ‘tweed’ look. That tweed definitely looks better when it is worn. This is clearly straight from the factory, of course.

But it is going to fade and become more like the real thing as time goes on. A bit like a nice solid spruce top on an acoustic, it will mature and improve with age. Nevertheless, even now, it is a nice look that is certainly different from today’s norm.

The grille cloth is likewise fashioned in its previous design. Together the cabinet and the speaker cloth invoke a feeling of those days gone by. And to round it all off, there is a stitched leather handle.

Strong and durable, that is also a flashback to the original amps. The final touch is the retro control panel on top. But we will be talking about that soon.

The Fender ‘Tweed’ amps of the 50s are very sought after. And whilst it is not an exact replica, it is a close as you could possibly get. The presentation is good, and Fender has gone to some lengths to make it as ‘real’ as possible. 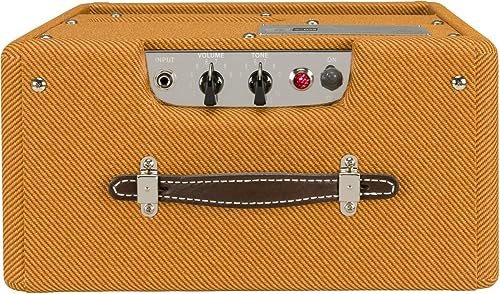 If you’re trying to replicate the past with cabinets, there is no point in not including everything. The control panel then is sparse indeed. But that only adds to its appeal. You don’t get much here because you got nothing back then.

It is a simple two control knob affair. A Volume and a Tone set on a chrome plate that has a mirrored effect. There is an off/on switch and a great looking ‘jewel’ bulb light that really does take us back.

If there is one addition that could have been included, it is a headphone socket. However, did we have them in the past? No. Then leave it out. We’re certain some will be asking for Bluetooth next.

Simple controls that are easy to use that look as they should. We have to say we are impressed so far.

Looks are all very well and good indeed. But what does it sound like? 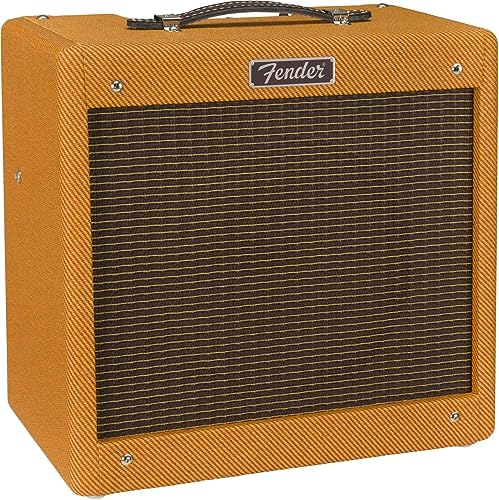 With every release and update of this series of amps must come some improvements in the sound. Bear in mind that it is still a 15-watt amp. And there is still a ten-inch Jensen P10R speaker.

The sound is largely created by two EL84 tubes and two 12AX7 tubes for the preamps. The rectifier is solid state.

There have been, of course, some circuit changes. The circuits for both volume and tone have been altered to make sure there is plenty of punch and attack. This especially when you start to push it a bit.

As you reach the higher levels of output, the bass response is still tight. And the circuit for the volume breaks up more slowly than on previous models. The amp retains good dynamics as it gets louder.

The Jensen ten-inch speaker plays its part. A favorite speaker of the Fender people for years. It adds a bit of sparkle and works great with the single-coil setups.

It certainly has a bit of snap, crackle, and pop about it. And whilst it is only 15 watts, it still delivers a punchy sound. Using it live, it is going to have to be mic’d up. But if you like the tones, that won’t be an issue.

Despite the presence of the EL34s, it doesn’t sound exactly like a 50s amp, even at full stretch. That would be asking too much. It has got a slight digital edge to it, but that is to be expected.

Overall, the sound is good, and there are no major complaints.

Vintage recreations never quite work. That is something we usually say. It is borne out of nearly every manufacturer and his dog, saying we can do vintage. Not with any digital parts you can’t.

You get it everywhere these days, with guitars, cabinets, and amps. This is vintage; this is authentic. No, it isn’t. It’s just a way of trying to convince us, the buyers, that it is. Then we buy it in a haze of nostalgia. If you want vintage, buy an original. Then you will get it.

This is an amp of two parts. The look and the sound.

The look is good. It is as close to a 50s looking combo as you are likely to get. Fender has done a good job in that respect. So kudos to them for a job well done.

Well done, especially for not trying to include stuff the people that don’t get it will want. Thankfully there is no Bluetooth. This has been designed like a 50s amp. It works.

Not quite, but it does have a good sound that can’t be denied. Plenty of punch, and it works well when you crank it up a bit, Not a pure 50s sound. But still a good one.

So let’s have some closing considerations.

Or how about the Best Mini Amp, the Best Portable Guitar Amplifiers, and Guitar Headphone Amps you can buy in 2022.

This review has been an interesting experience for us. We are Fender people. We have a ‘62 Precision. And a great 80s Fender ‘Made in Japan’ Precision. But in recent years, we have had to recognize that ‘surfs up’ is over. Fenders aren’t the same anymore.

Furthermore, it has nothing to do with ‘where are they made’ either. They are not the same wherever they come from.

But this little amp has been a heartwarming experience. They have done a good job. And haven’t gotten silly with design or the inclusions. They have just breathed life back into a classic amp. 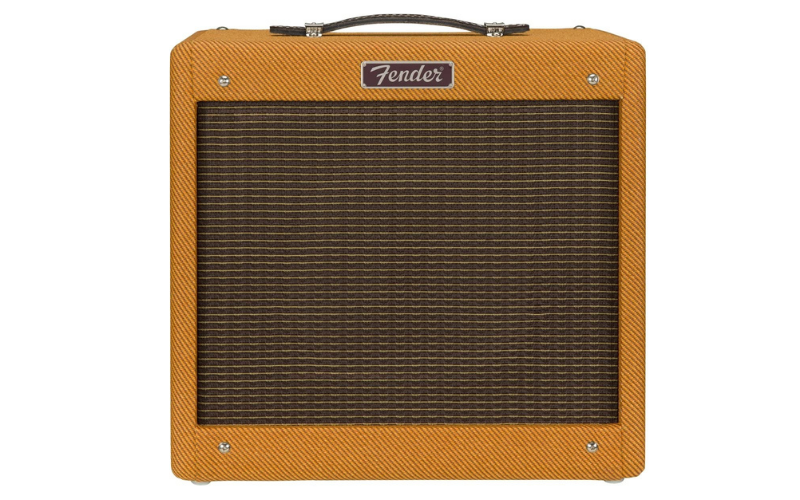 Sound-wise it is good as well. Not ‘vintage’ to use the dreaded word, but good. But here is the downside. The price. We have saved mentioning it until the end.

This is not cheap. In fact, it is twice the price of a 20-watt Orange amp. Albeit that the Orange is just an amp, it is also much more expensive than a 50-watt Marshall. This is probably not going to be an amp that someone browsing all options is going to buy at this price point. Not when there are other tried and trusted brands that are much cheaper.

However, it will suit the Fender enthusiast who wants more than just an amp and wants some Fender nostalgia.

For the latter group, they won’t find a better amp. Good looks, good sound. An amp that Fender, we’re sure, is pleased with. And those Fender enthusiasts who buy it will be happy to.

Well done to Fender. Definitely a step in the right direction.

Until next time, may your amplification be pure, and your music always make you merry.