Anyone who reads these articles on Fender guitars will know I have fallen out of love with them lately. To me, for many years, there was nothing to compare with them. Maybe a little unfair because it was the Precision bass in my case that was untouchable. But Fender the name, at one time, bore the mark of greatness.

They were untouchable. This Fender Player Series Telecaster Review, therefore, might be interesting.

There have been and are some great names. Beck, Blackmore, Hendrix, Gallagher, Gilmour, even George Harrison loved his Telecaster. Going back in time, we see the likes of Hank Marvin. And of course, the man who did more for Fender and thick-rimmed glasses than anyone, Buddy Holly.

Many of us can’t deny though they lost their way post-1965. They recovered a little in the late 80s, but never really reached the heights they were at. In fact, my ’83 Japanese made Precision is way better than the American equivalent these days. Though not better than my ’62, which is my point.

The Fender reputation went out of the window in ’65, and now we see endless attempts at recovery. Some work, most don’t.

Where it all started…

But if we are talking Fender history, then this is it. The Fender Telecaster. The guitar that really started Fender’s march to greatness. The guitar that earned them a place in musical history.

Starting life as the Broadcaster, it soon became iconic. The shape, the sound. One of the great Leo’s masterpieces. Two men created modern rock music and all its genres. Leo Fender in Fullerton, California, was one and Jim Marshall in London the other. They gave us the vehicles and showed us the way.

It all get’s very confusing…

Nowadays, we don’t just have Fender; we have various levels of Fender at varying costs. That is without the Squier brand. It all gets a little confusing. The Player series has been created as the first step into Fender guitars. We thought that was the Squier’s job. Anyway, here we have a Player series Telecaster to look at…

Created to replace the old standard series Fenders, this is their latest idea to get players on the Fender treadmill. Fender certainly seems to have made a bit more of an effort with this than some of the previous incarnations. It looks right and is made from the right materials. And if you are going to have a Telecaster and it isn’t Sunburst, then Butterscotch with a black plate is the way to go.

But, let’s not get too excited. We have been down this road before. So, let’s have a closer look at what Fender has done with this latest Telecaster…

Some people, mostly Gibson fans, think the Tele is a one-trick pony with a lot of twangs and nothing else. The Tele can certainly ‘twang’ like nothing else, but it has a bit more to offer than that.

The Player Tele arrived in 2018, and it did raise one or two eyebrows. Of course, it has the look, the pure and simplistic lines that half the guitar making world has copied. But it also had something else. It could demonstrate an attempt to return to the guitar’s roots. It cannot completely do that, of course, but it does hint at the history that precedes it. 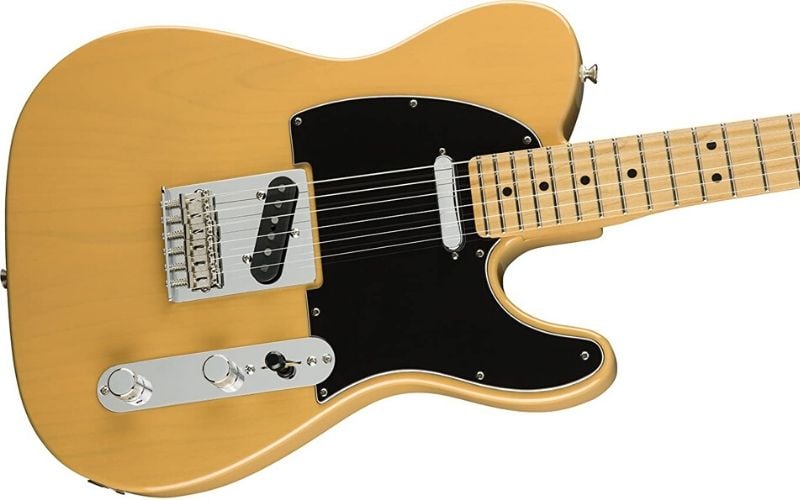 It is a Fender — the feel of it and its styling. The sound and the build are all there. And it has still got its versatile side. In the hands of a guitar player, a Tele can cope with most things. It always was a workhorse guitar, and this model is like that. It feels tough and ‘road-ready.’

Like all the Player series guitars, it is made in Mexico.

Since 1956 Alder has been the goto wood Fender used. Not just for the Telecaster, but for the Strat as well as the Precision and Jazz basses as well. It is able to produce a bright sound with good sustain. It has a lot of resonance and can attack when asked. It has proved to be a good choice.

So, when you are building your new series of guitars, what do you choose for the body wood? 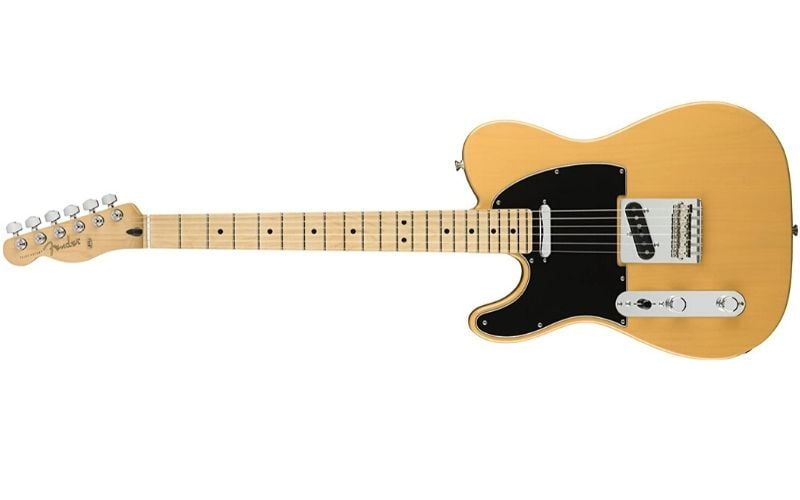 Single cutaway, of course, and finished in that great Butterscotch Blonde color. It has a Polyurethane coating to finish it off. Finally, add the black scratchplate, and it gets ‘the look.’ And it does look impressive. Strap buttons are fitted, and there is a very slight bevel to the edge of the body.

A classic iconic style that is timeless. You really can’t go wrong with the body, can you, so let’s have a look at the neck. That can sometimes be a problem.

It has a ‘modern’ neck with a traditional ‘C’ shape. Not exactly sure what they mean by modern. As soon as I write that about a Fender, a shiver goes down my spine. I tend to think, ‘what have they done to it now.’ But there is no need to panic. The modern ‘C’ is just a traditional C shape with a slightly flattened back. 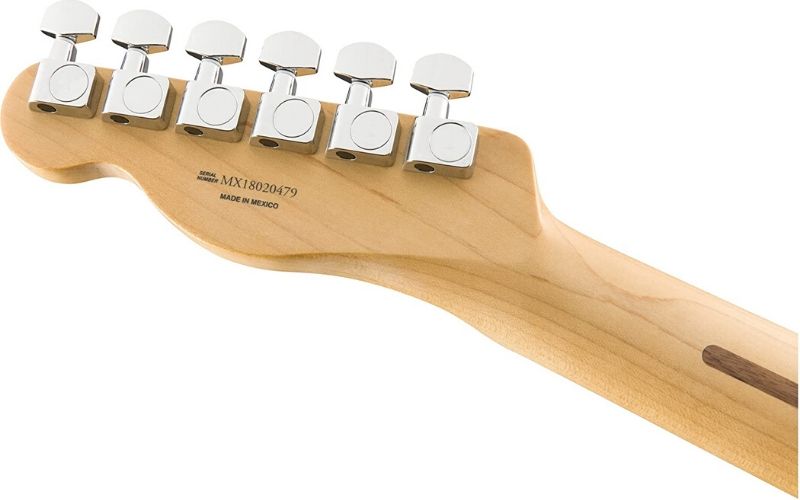 This is actually called the ‘flat oval’ shape; if they had written that instead of modern, there wouldn’t have been a panic. Maybe a little joke from Fender there. Most would prefer the traditional C, but it must be said this neck is a little easier to play. And as this guitar is designed as the first step on the Fender ladder, they want it to feel good. And it does.

The neck is maple, as is the fingerboard, with a 9.5-inch radius and is also given a nice polyurethane finish. One slight adjustment there is now the 22nd fret. The originals have 21, and some players prefer the 21 fret original. With the 22 fret version, there is an overhang of the neck which crosses the scratchplate to accommodate the extra length.

Body good, neck good. Fender must be doing something right. Have they cut corners on the hardware. So often they have with some other instruments. Let’s see…

Starting at the top. The Telecaster headstock is in a traditional shape, and there are six standard Fender sealed machine heads. For standard, read budget, they aren’t the best. Nevertheless, they seem to do their job and hold the tuning. They are chrome plated.

The nut width is 1.650 inches and is made of a synthetic bone. Let’s just join the real world for a second. Synthetic bone is a plastic. Not the cheapest plastic, but plastic all the same. So let’s call it what it is. That is a little disappointing.

Time for the Tele twang…

It has through the body stringing with a hardtail bridge system. This certainly adds to the potential of the twang. The bridge though has block saddles, which will help the intonation and adds a bit to the overall sound. Good choice there. 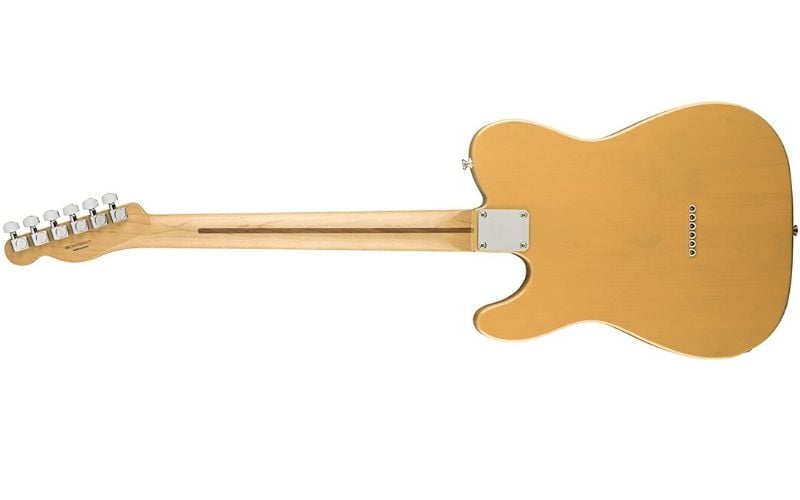 But let’s have no more delays. It’s the sound we all want to hear. There are two series single-coil pickups. Thankfully. They are not vintage at all. The originals had A3 magnets; these are A5. It is true that some earlier models did have A5, but A3 was the choice that created ‘that’ sound. You know the sound that disappeared when CBS reared its head.

The Alnico 5’s are a nice pickup, though. Perhaps a bit more bottom end than the A3’s but they are capable of delivering some punch as well.

It doesn’t sound vintage, and it doesn’t growl at you. I doubt anything ever will again. But it is a good sound. And bear in mind this is a ‘starter-Fender’ if you like and so the price point is quite a bit cheaper than the ‘real thing.’ On that basis, it is surprisingly good. But more on the sound later.

As you were. No change over the last few years. Volume and tone control and the pickup selector which will give you the bridge, neck, or both. A solid build and chrome-plated. They are fine.

How Does It Play

It certainly plays quite nicely. If you are used to a Telecaster and already play one, it is going to feel slightly different. This is because of the slightly flattened ‘flat oval’ neck shape. It does though, make it a little easier for a younger, less experienced player.

It has a nice soft polyurethane coating as I have said, and that makes it feel comfortable to the hand. It also makes it feel like quite a fast-playing neck.

No complaints then about how it plays, it is quite nice.

How Does It Sound

Let’s go back to what makes the Telecaster special. That twangy single-coil sound. Have they got it right that is the question?

They have done ok, because the pickups generate a good sound. Not the sound of the pre-65s, of course, but a very modern Telecaster effort. The single-coil is the pick up of choice when it comes to a Telecaster. If it has anything else, it isn’t a Telecaster, These cut through nicely and are going to be great for all sorts of genres.

Great sounds across all three positions…

The bridge pickup gives you plenty of twang, and the more jazzy and mellow sounds will come from the neck. Combine them, and you have a nice sound with plenty of middle. Crank up the amp, and it will really start to perform, and either neck or bridge settings are going to give you full-on distortion.

I will have to admit this was the area where I thought would have a good old rant but no. It’s not a vintage sound, but it is a good sound. More than that, it does justice to its forebears and deserves to be called a Fender. There is plenty of variety and like its predecessors certainly not a one-trick pony.

So many guitars, so little time! Looking for another to add to the collection? If so, check out our reviews of the Best Blues Guitars, the Best Resonator Guitar, and the Best Hollow Semi Hollow Guitars currently available.

Or if you fancy something else from Fender, how about the Fender Duo Sonic, the Fender American Professional Jazzmaster, or the Fender Player Stratocaster. But if you’ve got you’re heart set on a Tele, but don’t want to spend a fortune, then our Squire by Fender Classic Telecaster review could be an interesting read.

But whichever you choose, you’re going to need a set of the Best Electric Guitar Strings and one of the Best Guitar Cables to go with it.

I like it. I like how it looks and how it sounds. I think for the sake of balance and to find a little fault that they skimped in the hardware area a little. But then many manufacturers do that.

If you wanted to buy a butterscotch American Telecaster, it would cost you three times the price of the Player series. The question to be asked is this.

Is it three times better?

It is certainly better but by three times? I doubt it.

I am pleasantly surprised that after a long time getting things not quite right, that Fender have come up with something acceptable. In fact, more than acceptable.

This is good and justifies bearing the illustrious name of Fender Telecaster.