The Mustang I V2 electric guitar amplifier is the smallest in Fender’s original Mustang series. It’s a 20-watt solid-state modeling amp with an 8-inch Fender-branded speaker. “V2” means it’s been upgraded from its original design. It comes fully-loaded with amp models, presets, and effects, and it’s perfect for practice at home or jamming in a small group.

An onboard USB port means you can connect it to a PC or mobile device to edit the voices further. Unfortunately, support for the primary voice editing app, FUSE, was discontinued by Fender in 2023, so it’s no longer supplied with it. However, with a little effort, you can download and install it, or use alternative software.

So, let’s dive a little deeper into the Fender Mustang I V2 Electric Guitar Amplifier… 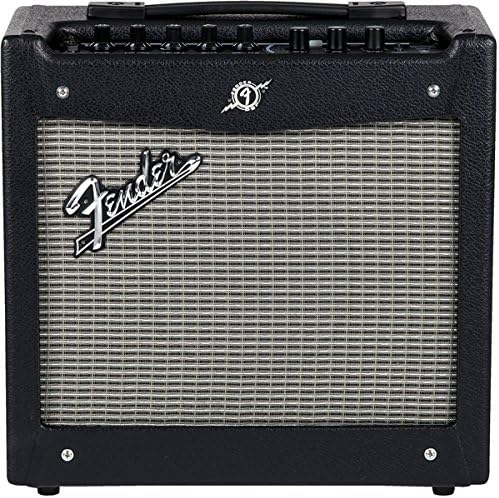 And it looks sleek and cool, with its iconic black Tolex covering, Fender knobs, and silver grill cloth with the famous Fender logo.

Along the top of the amp are several knobs for selecting and adjusting the presets. From left to right, there are controls for Gain, Volume, Treble, Middle, Bass, Reverb, and Master Volume.

Usually, in a guitar amp, Gain determines how much the channel is overdriven into distortion, with lower settings giving a cleaner sound. Except for Master Volume, these controls are inactive – it doesn’t matter how they’re set – unless you activate one by turning it.

Otherwise, the actual values are what is stored as part of the current preset.

To the right of these controls are the PRESET and BANK knobs, which select one of 24 presets. They’re stored in three banks of eight presets each. Multicolored LEDs next to the selected preset indicate which bank is active. Above the PRESET control are SAVE and EXIT buttons for storing user presets.

Further to the right are two effect selection knobs. The MOD knob selects modulation effects, and the DLY/REV knob selects delay and reverb effects. And at the far right is the master power on/off switch.

Above the DLY/REV control is a TAP button, which you use to set delay or echo times. Or if you hold this button for two seconds, it turns on a chromatic tuner that uses the three bank LEDs.

To the left of the Gain control is the 1/4-inch input jack for an electric guitar. There’s also a 1/4-inch jack for an optional one-button footswitch, which you can use to switch between two selected presets.

On the right side of the top panel is a 1/8-inch Auxiliary input, where you can connect an MP3 player or another audio source when you want to play along with a song.

Likewise, there’s also a headphones jack that can be used for headphones, powered speakers, or as a Line out for recording. Plugging into this jack mutes the Mustang’s internal speaker.

Connect to your computer…

Finally, near the power switch is a mini USB connector. This USB port lets you connect the Mustang I to a personal computer or mobile device. It serves a dual purpose.

First, you can run applications that let you tweak the presets to your liking, or save and recall banks of presets. Second, you can connect an audio interface to record your playing. 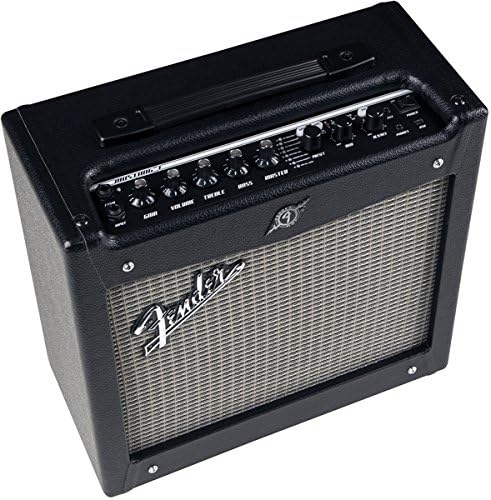 The Mustang I V2 ships with eight amplifier models. These include the Fender 1957 Deluxe, ‘65 Twin, and ‘59 Bassman. There are also a couple of “British” models (use your imagination). Plus, a few unusual choices, such as “Super-Sonic” and “Metal 2000.”

Unlike a traditional multi-channel tube amp with a separate set of controls for each channel, the Mustang I V2 uses presets. A preset is a combination of a virtual amp model plus all of the associated tone, volume, and effects settings.

The Mustang has space for 24 presets, saved in three banks. Each of the eight presets in a bank uses a specific amp model, which is clearly labeled. The bank indicated by an “amber” LED is all factory presets, while the “green” and “red” banks are user presets.

However, the amber bank can only be edited with Fender’s FUSE app or similar software.

The Mustang I V2 provides a total of 27 effects, which are selected with the MOD and DLY/REV knobs. Only one effect can be applied at a time.

You can adjust the effects level manually, as well as use the TAP button to set modulation times.

How Does it Sound?

The Mustang sounds surprisingly good considering its modest cost. The Fender Twin model is especially popular with users. The effects are also quite usable, on par with many standalone pedals.

As with most small modeling amps, it sounds best at low or medium gain settings. If you want a small amp that you can turn up all the way and use with a microphone, you’re better off with a tube amp.

From Fender with love…

On the downside, there’s no specific “clean” option. The Twin model seems to provide the cleanest sound, though full bar chords tend to have a bit of crunch. Soloing sounds quite smooth, though.

Many users have said that the amp models benefit from some tweaking with Fender’s FUSE software. Since it’s no longer available from Fender (see the next section), you’ll need to either make arrangements to source it elsewhere, find a substitute, or use the provided models as is.

Since the introduction of the Fender Mustang amp line, it included the FUSE application for Macintosh or Windows. This software lets you modify the amp voices, settings, and tones, and load and save settings. You can also edit and save presets, and download presets from other Mustang users.

As a result, FUSE gave this series of amps a big advantage over the competition.

But help is here!

There are a couple of workarounds (other than using the amp models as is). FUSE and the necessary drivers are still available from other sources, including here. Users report that it still works fine on Windows 10, although there won’t be any future enhancements.

Alternately, the Remuda app for Android will let you edit your presets and is completely compatible with FUSE files. It actually has a long list of enhancements, which you can read about here. Remuda isn’t free, but you can try out the free Lite version first.

Looking for other amplifier options?

Want a tube amp or a solid-state amp? Then check out our reviews of the Best Tube Amps and the Best Solid State Amps you can buy. Or, if you need a small amp or a portable amp, then have a look at our Best Mini Amp and Best Portable Guitar Amplifiers reviews.

Also, for an in-depth look at an amazing amp for the price, check out our Boss Katana MKII Review.

The Fender Mustang I V2 is an excellent small amp for practicing at home or an intimate jam session. At 20 watts, it has plenty of volume for a small room.

The controls are simple and straightforward, making it ideal for the beginning player with less experience using electric guitar amplifiers with modeling technology. Straight out of the box, it works as expected with no setup. 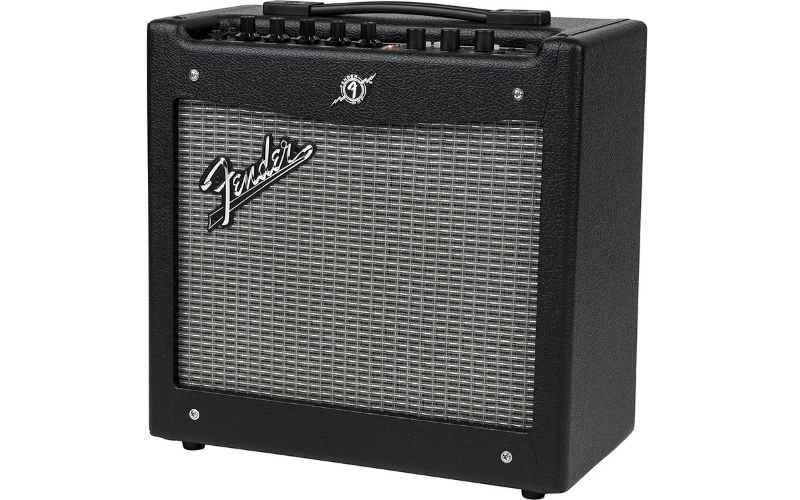 This amp is ideal for players who want a little (or a lot) of the tube-style crunch that’s popular in most rock and blues styles. And Fender amp lovers will appreciate the several faithful reproductions of their classic designs, including a decent clean Twin sound.

The USB connection is a big plus, although users will have to go through a few extra steps to get the FUSE application up and running. The end of official support for this venerable app is something of a disappointment, and it’s reflected in the amp’s very attractive price.

Thanks for stopping by. Now, go bust out a few jams. 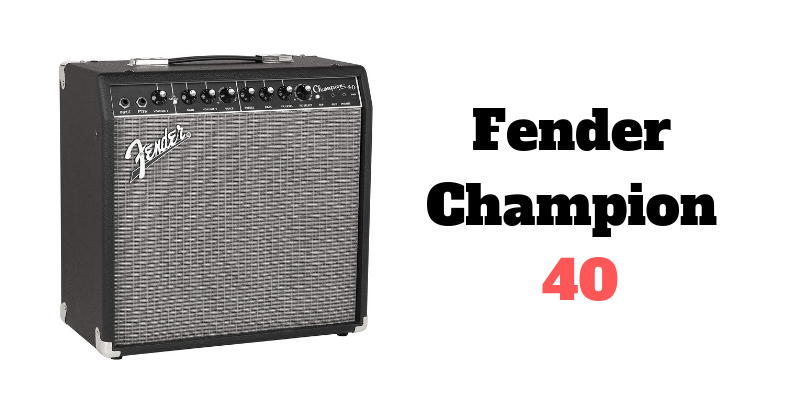 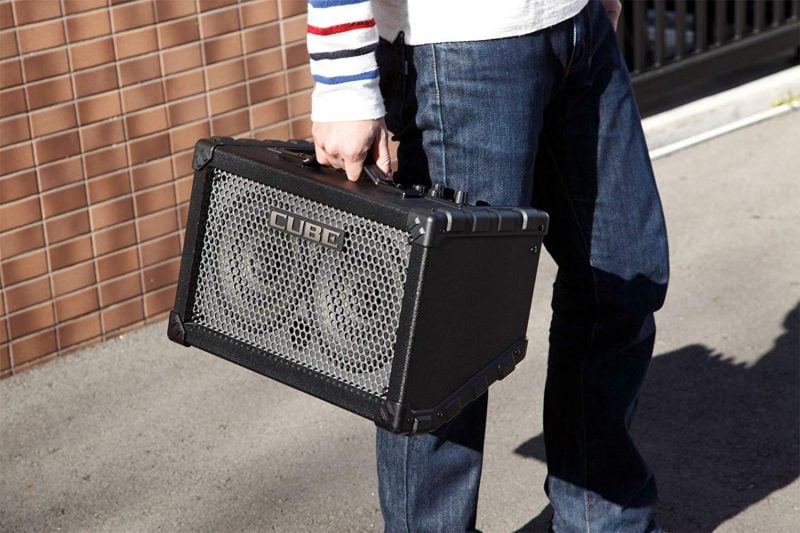