In most cases, you only have to mention the name, and everyone knows what you’re talking about. The name Fender reverberates through the music world. The subject of this Fender Malibu Player review is another addition to a historic, in some cases, an iconic range of guitars.

But does it deserve its place along side such a famed family? We will see.

Their rivalry with Gibson has made the brand even more interesting. Musicians can get quite parochial about it. It is an interesting battle. They both produce great six-string guitars. Everyone knows them, and it is simply a matter of personal choice.

But where the bass was concerned, there was only one name in the frame. Gibson produced one or two good bass guitars, the EBO being one. But, Fender are kings, with the Precision, four-strings, and a single coil that is, followed by the Jazz. Nothing compares even to this day.

So did Fender win the manufacturer’s crown?

Evens on the six-string electrics and way ahead with the bass guitars, but not quite. Gibson makes acoustic guitars that are some of the best there are. Whereas Fender never really got their head around it. And it is the acoustic, electric/acoustic field we are in for this review.

These days it seems like Fender has accepted that Gibson has got more than an edge. Gibson to Fender in Acoustics is like Fender to Gibson with the bass – Worlds apart. Fender now tries to appeal to certain markets with their acoustic and electro/acoustics.

So, let’s take a look at what they are doing and if they are succeeding with the Fender Malibu Player…

This is a guitar from Fender that, in some ways, steps away from what we are used to from them as a company. They have traditionally designed and made guitars aimed at quality, and sales would be on the basis of the quality of the instrument.

The Malibu has a different strategy…

They have tried to recreate a feeling or an emotion and hope that people will buy into that. The sun-soaked Beach Boy days of Southern California in the late 50s and early 60s are long gone. They aren’t coming back. But Fender seems to think they can go some way to recreating that ‘feel’ and that ‘emotion’. 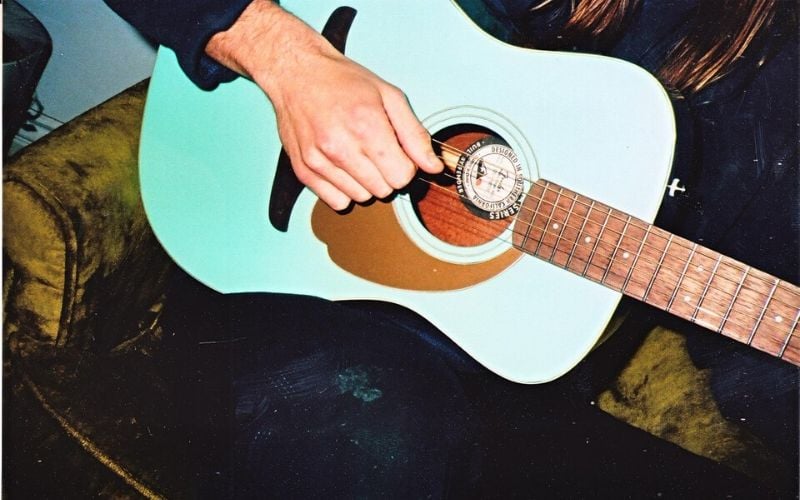 They have called the guitar the Malibu to plant the seed, and they’ve painted the top.

Is that a good idea sound-wise?

They have included some very Fender-type additions like a Strat look-alike headstock. It has a smaller body and a Telecaster-like ‘C’ shaped neck to make it feel a bit like an electric guitar. They have tried very hard to do something different. Maybe a little too hard. It doesn’t give you that ‘California vibe’ at all. How could it?

We are going to judge this guitar on its merits rather than what Fender thinks we ought to be thinking. Then we will consider whether they are ‘California Dreaming’?

It has a smaller compact body that is ideal for a beginner. Easy to hold and balance on your knee, it feels comfortable and just right. If it were to fall in the hands of a starter, they will love it. An experienced player though, might not appreciate the smaller body because of the lack of a quality sound. But that is another issue.

An experienced player will look at this guitar as a bit of fun, on the beach, around the pool, something easy to play for a singalong. 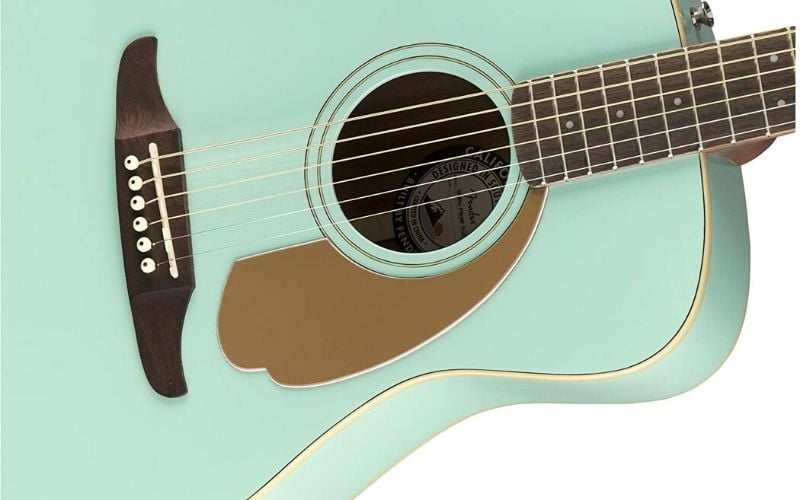 Maybe Fender has got the vibe right?

A simple, straightforward, no cutaway design dominates the look and style. The woods used are good. Mahogany back and sides give off a deep rich tone. Though being a smaller than usual size, that is a bit limited with the Malibu. But here is the first of the contentions. Let’s return to our previous comment regarding painting the top.

There is a Spruce top. A good tonewood, crisp and bright, it mixes well sound-wise with the deeper sounding mahogany back and sides. Spruce is known for its sound. But then Fender painted it. There are a number of colors. But they call this one Aqua Splash. Oh, dear, oh, dear.

The top is the soundboard…

It possibly provides the tone that is most prominent with a guitar. Spruce is a great tonewood. It is popular because it has a great dynamic range and can react to different styles of playing. It improves with age and as it matures. But not if it is painted! 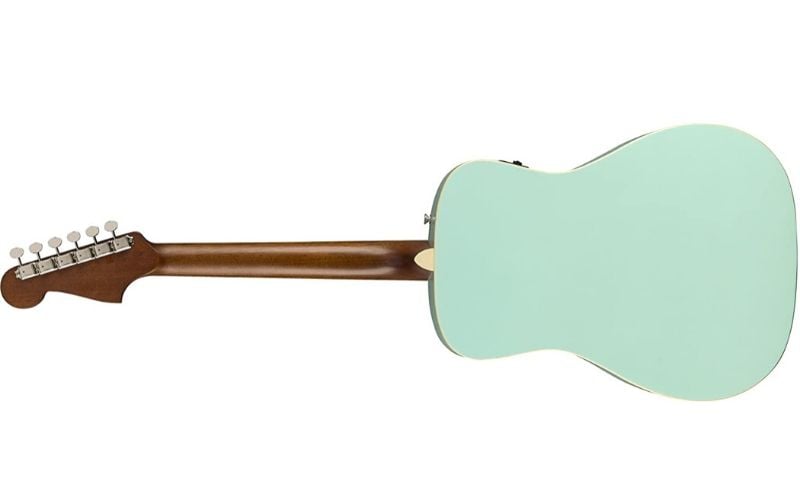 The top vibrates to help create the sound. When you paint a guitar, you will change all that. Even the lightest coat of ‘paint’, and we use that term lightly, will affect the tone. It will dampen the vibration and change the tone. And don’t let anyone say they are painted in ‘guitar paint’ – there is no such thing.

Some people might think the Malibu looks pretty, but they will be buying the guitar for that reason. And not buying it because it sounds great, as all Fender guitars should. The surface is finished off with a glossy polyurethane finish. It has been given a gold pickguard.

If we are honest, it makes us wonder if it was just a bad day in Scottsdale, Arizona, the day they thought of this. It does though, have a nice two-ring rosette around the soundhole.

Internally the bracing is good with its scalloped X-brace design. This helps to create a dynamic sound and give a good volume. But part of it relies on the flex of the soundboard. That flexibility has been taken away a little bit by some paint.

Fender has given it a very nice and comfortable ‘C’ shaped neck. Great design for a beginner. It is quite narrow, though, so once again great for the starter. But maybe not so good for an experienced player who may need some string width. 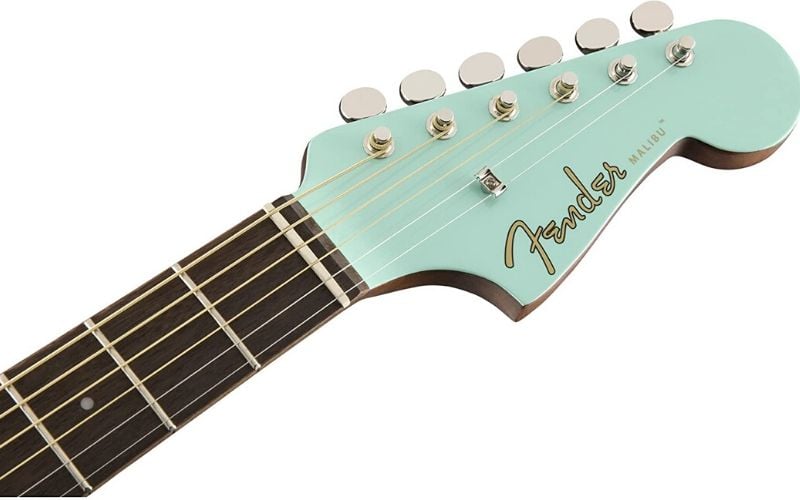 It is a mahogany neck with a walnut fingerboard. There are inlay dots and 20 frets. It has a fairly standard 24.1-inch scale. The neck has been given a nice smooth satin finish with no paint in sight (makes a nice change!).

To ensure that there is something to talk about where the neck is concerned, they have included a Strat-like headstock. And yes, you’ve guessed it, they’ve painted that as well. It has an adjustable truss rod.

Being acoustic/electric, we need some electrics, and there are no complaints here. The Fishman designed pickup and preamp gives a very good sound when amplified. It is an under-saddle piezo configuration with an EQ, featuring bass, treble, and volume control. 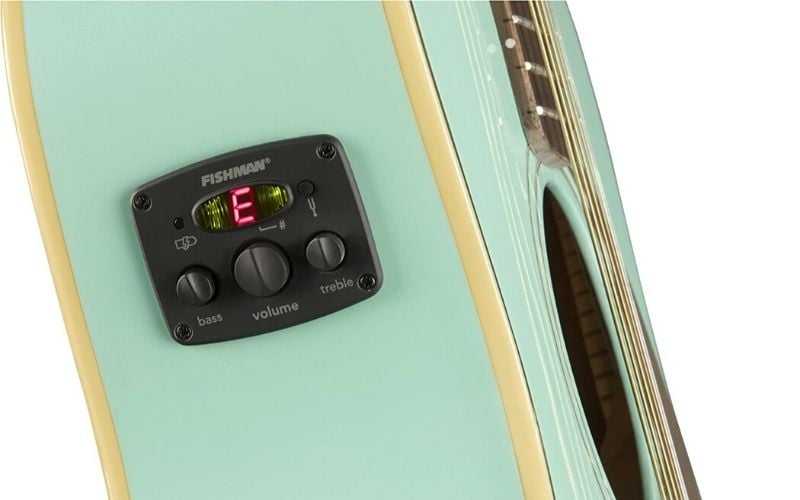 It also has a built-in electronic tuner. The battery compartment is located next to the output socket, making it easy to change the battery. It is a good system but quite basic and doesn’t have any finer points like a feedback filter. Controls are well located on the top of the body for ease of use.

Up at the top end, we have already mentioned the Strat-like headstock with its six on a side inline tuners. The headstock is painted the same Aqua Splash as the body. The six tuners are sealed nickel-plated.

The Nut and the Saddle on the bridge are both Nubone material. Nubone has similar qualities to some people’s favored TUSQ material. Nubone doesn’t affect the string vibration as plastic can, so that is a good addition. The bridge is made of mahogany and has a Viking design. It has dotted string bridge pins.

Fender is well-known for producing guitars that have a big sound. Some of their Dreadnought acoustics, while not being the best on the market, are still very good. If you are expecting that sound and performance, you might be a little disappointed.

It’s rather small, and compact body prevents any deep booming resonance, and that painted top makes the sound a little bit flat. Sound-wise we are afraid it is not going to win any awards. The lower frequencies are especially noticeable by their absence.

While the sound is ok and probably better suited to a finger-picking style, the really impressive acoustics are missing. We suppose the only benefit from having such low performing bass frequencies is that it will probably reduce feedback when plugged in. Hardly a reason to get excited, though, is it?

The fact of the matter is that Fender has produced a rather strange guitar that seems to lack purpose and direction. If they are trying to recapture a time when Brian Wilson was strutting his stuff, they are well-wide of reality.

This is no cheap entry-level instrument, either. The reality is for Fender and the Malibu that there are other guitars on the market. There are guitars produced by other makers like Yamaha, Ibanez, and Epiphone that are cheaper and far better sounding.

Or, if you’re a fan of Fender, then take a look at our in-depth reviews of the Fender Classic Design CD 60S, our Fender FA 100 review, or if you’re looking for a 12 string, our Fender CD 140SCE Acoustic review.

But, regardless of what you choose, you’ll need a set of the Best Acoustic Guitar Strings from time to time.

We are Fender people. Let us make that clear. So when we get the chance to review a Fender product, whatever it is, but especially guitars, we get excited with anticipation. Perhaps that is why we feel that this guitar has let us down a bit.

In many ways, it seems like its aims have been confused. It has a headstock like a Strat and descent preamp and pickup. This, with the nice slimline ‘C’ neck, indicates they wanted it to feel and play a little bit like an electric guitar. But it isn’t, and the body design is too compact for it to perform well as a pure acoustic.

Jack of all trades but master of none…

If they had set out to design a fun guitar for a beginner or novice player. Or a guitar to play around the campfire by an experienced musician, we could go with that. But it seems to try and cover all the bases without really covering any. In its position, it is best suited as a guitar for a beginner. Compact, nice neck, easy to play, and great for a starter. But the price point doesn’t say that.

We really don’t see the ‘California vibe’ they put out in its marketing info. We are not really sure what they mean. And if they think they can create something by painting it, we are not sure where that idea has come from either?

It is quite well-made, and there is nothing wrong with its build. The basic materials are also good. It is made in China where a lot of guitars are these days, and they have done a decent job. We have no complaints in that area. But this is Fender we are talking about, and it’s supposed to be one of the best at whatever price point. We are afraid this Fender Malibu just isn’t.

“All the leaves are brown, and the sky is grey.” And all the Aqua Splash green in the world isn’t going to bring it back…

Happy strumming, whether you are dreaming of California or not?