We have been using Fender guitars for as long as we could afford them. From the point of view of a bassist, they far outclassed Gibson and everyone else. We loved them, and, in a nostalgic way, we still do.

However, in recent years we have been very critical of Fender and the quality of what they produce. The real quality just isn’t there anymore. Manufacturers overseas do it better these days. We still use a Fender Precision, but an early Japanese made Fender from the 80s. It is better than what they make today.

Will the Fender FA-235E Concert Bodied be a similar disappointment?

Fender was late in the game for acoustic guitars. They started to manufacture them ten years after their electric guitars kicked over the top spot. Somehow though, they never got anywhere near the quality of the guitars and basses that were to rule the world.

Martin, Gibson, and Epiphone were doing the acoustic job. Fender was behind and didn’t catch up. Even Yamaha and Ibanez were making quality acoustic guitars before Fender got the design pen out.

Was that the problem?

Did they realize they couldn’t catch up with the real quality that was available and so took the ‘fun’ route? Taylor came along in the 70s and showed that they could make quality acoustic guitars. So why didn’t Fender seem to try? Or worse, perhaps they were trying and just couldn’t.

Some would say that they wanted to capture the carefree Southern California lifestyle in their guitars. That was never going to last because ‘it’ didn’t. It was a short-lived idea, something good, that went horribly wrong. A bit like Fender themselves in many ways. There is irony for you.

Fender is not renowned for its high-end acoustic guitars. People often confuse this issue because of the Strat and the Tele. The Precision and the Jazz. But, they do not produce that quality with acoustic guitars. If you think because it happens to have Fender written on the headstock, it will automatically be good, think again.

They are better known for their starter and mid-range acoustics. In this market, they do quite well at times. Unfortunately, even these instruments compete at a disadvantage with manufacturers like Yamaha. Fenders are more expensive and usually not as good.

Resting on their laurels…

They have produced some decent acoustic guitars. The CD-60 All Mahogany and the CF-60 being good examples. They are not concert quality but are both good guitars.

Recently they have focused their efforts on trying to revive their ‘fun and surf’ Fender style. The Beach Boys and Jan and Dean are long gone. Just like the lifestyle and the music, they are fondly remembered, and that is all. It’s not coming back.

But let us move on to the guitar we are going to have a look at in this Fender FA-235E Concert Bodied review, and see what this is all about… 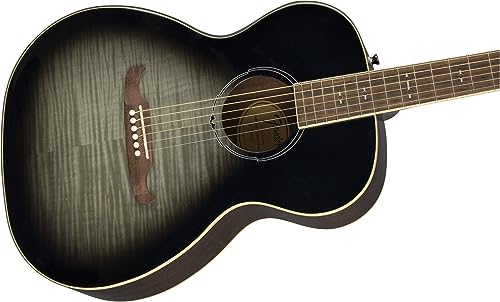 The concert shape is a flat top that is smaller than a traditional Dreadnought style. The corners are more rounded, and it has a waist taper that is deeper. Easier to hold and in many ways to play, for a starter or improver, it is a good shape.

They have tried to make it look good, and it does have a certain style to this ‘Moonlight Burst’ finish we are looking at. It is all-laminate wood construction, which all budget-range guitars are. It has some quality, if basic, electronics from Fishman, providing some amplified sound.

As an instrument, it is aimed squarely at the starter and the improver. Experienced players will bypass it except if they want a guitar they can take to casual events for a sing-a-long. It is made in Indonesia. So, let’s have a closer inspection…

As we have already said, this is a concert shape, a smaller version of the Dreadnought, and it has laminated wood construction.

Laminated means that thin veneers of wood are glued together to form a thicker piece from which the guitar is then made. A common practice these days. It saves wood, which is a good idea, but it also saves money, which is the real driving force. The sound it produces is adequate but not in the same class as a single piece of wood that better quality guitars are made from.

The top, the soundboard, is made from flamed maple and the back and the sides from Mahogany. Maple is a common wood for the top and produces a nice sound that is clear and bright. The Mahogany will, as we know, give it some warmth and depth and plenty of mid-range frequencies. There is no cutaway.

The body is given a nice white binding, and there is a rosette design around the soundhole.

Internally it has an ‘X’ bracing pattern. This bracing pattern is often used and has an ‘X’ shape formed behind the soundhole. There are some other braces that cross the body, sometimes called tone bars behind the bridge. It is a good system and produces a stable body design, which in itself helps the ‘voice’ of the guitar.

On the top edge of the guitar are the controls for the electrics placed in a convenient position.

Not sure on the finish?

The guitar itself weighs just under ten pounds and has a glossy finish Fender call Moonlight Burst. As with the majority of the later Fender finishes for their acoustic guitars, we are not convinced. It resembles a sunburst without the colors. We can’t say we like it.

The body though, has a decent build without any apparent flaws given it is a budget range instrument. 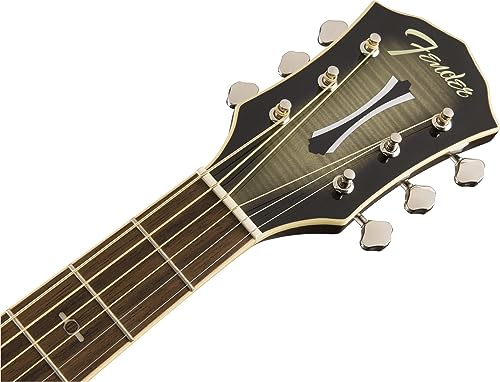 Fender is quite good at necks on guitars, and so it is with this. Made from Mahogany it has that nice easy ‘C’ shape design that is great for a young player. The fingerboard is Walnut, and it has a scale length of 25.3 inches.

There are twenty frets, of which only 14 are easily playable because there is not a cutaway. There is an adjustable truss rod. The nut width is 1,69 inches. There are Pearloid inlays with a Keystone design, which we think is quite nice. The neck has full-length all-round binding, which is also a nice design touch.

Nothing fancy with the neck at all, but there doesn’t need to be. It plays nicely with only a little fret buzz that can be removed with some adjustment.

Often the place where cuts are made to save a little bit of money, but Fender has done quite well here. Up at the top are six open back chrome tuners, not the highest quality, but good enough to keep the guitar in tune. They are laid out in a three-plus three configuration on what Fender presumably thinks is a nicely designed headstock. We shall leave that discussion there.

There is a GraphTech TUSQ nut. This is made from a high-pressure created polymer, which is a step or two up from plain old plastic. People overlook the importance of the nut, which is very important to the sound of the guitar. From the grooves to the material used, it needs to be as good as you can get it.

Down at the body end, there is a Viking bridge made from Rosewood, a good choice, with a GraphTech TUSQ saddle. There are the standard white bridge pins with black dots. Decent hardware in some places, adequate in others. Not too many corners cut, so a good job there. 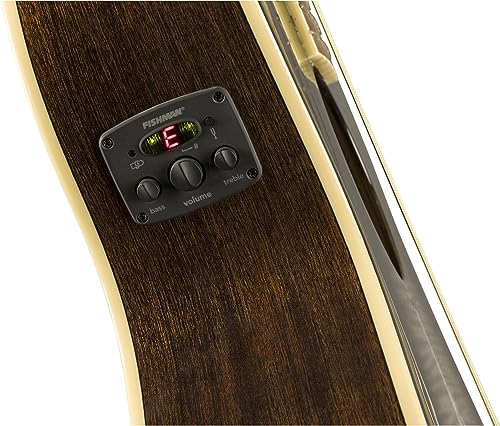 One wonders why Fender is producing a guitar that needs electrics that they don’t manufacture themselves. This is another area Fender lets slip. They used to be able to make great pickups. Somewhere it went wrong. Even Hendrix had Roger fit some Seymour Duncan pickups to ‘that’ white Strat.

The choice here has been Fishman electrics. If you are going to fit something, then that is a decent option. Not the top of the range, of course, but as adequate as you can expect, and they do produce reliable performance.

Everything you could need…

There is a preamp with two-band EQ, and it includes a tuner, which is always a positive addition. As we mentioned earlier, the controls are located in a good location for use. Again nothing exceptional but adequate.

We are talking about what is supposed to be a budget guitar here, so we shouldn’t expect too much. What we are getting is slightly better than average in our view.

Quite nicely is the answer to that. It is designed with the starter in mind, so you would expect it to have an easy to play feel. The neck is comfortable, and the ‘C’ shape adds to the easy styling.

It is quite heavy at ten pounds, but the Concert design will be an asset to the younger player and will be easier to hold.

How does it Sound?

Acoustically it is quite nice. The maple top gives it a nice rounded sound. Not as much definition as a Spruce top might, but that is a personal choice and opinion. There is a nice warmth and depth generated by the mahogany body and sides. No complaints with the sound. It is quite loud considering it is smaller than a Dreadnought, with decent projection.

Amplified, it is a different thing. You just don’t get what you might call a very good sound from an acoustic-electric. Not without paying a lot of money anyway.

The electric sound is just ok. It is a bit thin and doesn’t have an all-round clarity of sound. But the reason for the electrics is surely to give the starter the opportunity to amplify it. It is unlikely they will care about the finer points of the sound. They will be pleased it goes a bit louder. Nothing wrong with that.

If so, check out our comprehensive reviews of the Taylor GS Mini, the excellent Epiphone Hummingbird Pro, the Martin LX1 Little Martin, the Epiphone EJ 200SCE, the Taylor BBT Big Baby, and the Epiphone AJ 220S.

Or, if you’re thinking of spending a little bit more, how about the Martin HD-28, the Martin D-18 Natural, or the Guild D20?

It is really a case with this guitar of the things we like and the things we don’t like. For many of you, what we don’t like will be irrelevant and quite rightly so. Personal choice and preferences play a big part in buying a guitar.

But for us, we don’t like the color scheme at all, and the least said about the headstock, the better. Apart from that, things aren’t too bad.

The hardware is adequate, as are the electrics. Basic and not excellent, but they do a job. The neck is good, which is important for the young player, and generally, it plays ok. The acoustic sound is actually quite nice and is probably the nicest thing about this instrument. 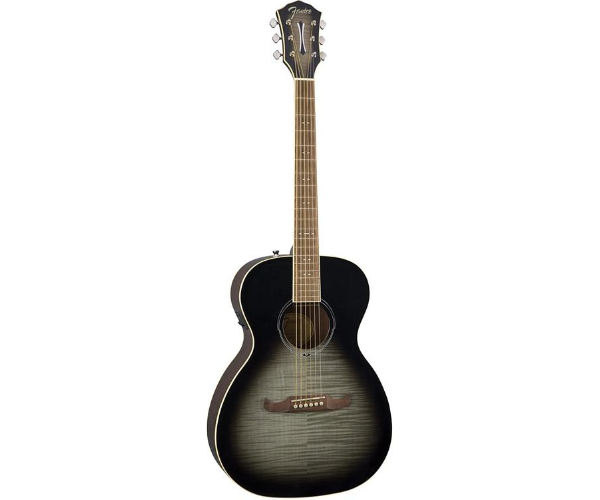 In our opinion, the only thing that brings it down the list of guitars to buy is the price. It seems somewhat overpriced for what it is. But then, as we said earlier, there is a cost added for the name.

Some will buy it because it says Fender, and if we are honest, it isn’t a bad guitar. It is better than a lot of the competition. It is just that we think there are better guitars at lower prices from a lot of other companies. Check out our suggestions in the links section above for quite a few of them.