Before we get to our Fender Duo-Sonic Electric Guitar review, I have to just mention that this was actually the first Fender guitar I came across. It was in the hands of a kid at school who had brought it over from the states with him. His Dad was in the US Military and was assigned overseas. It was my first experience of a real Fender.

We were all playing Hofners at the time. Fenders were not even in the shops at that stage. I remember thinking it felt ok, but without an amp, it was impossible to tell what it sounded like. It doesn’t look like a Strat someone remarked. It didn’t, but that was the point – it was different.

Arriving in the world in 1956, it was marketed by Fender as a student guitar. Aimed at amateurs and learners, it was referred to as the ¾ size Fender. Not really very accurate as it was used by some well-known players as their front line instrument. And it was at the heart of New York’s underground scene. In fact, it was the guitar of choice of a totally new underground sound.

It has been out of the Fender line-up for a while, but it is back in a close format to its original 60s spirit. It was changed about a bit in the 60s and 70s but came back in 1993. Now made in Mexico, its reintroduction will please a lot of Fender enthusiasts. It has a sound that is not Tele and not Strat. It is somewhere in the middle. This makes it ideal to fit into a lot of modern music styles.

So, let’s take a closer look at the Fender Duo-Sonic…

Simple design as it was in its early days. This guitar, along with the Musicmaster that was released just before it, was made to be simple. The shape hasn’t changed much with the double-cutaway that just says, Fender. 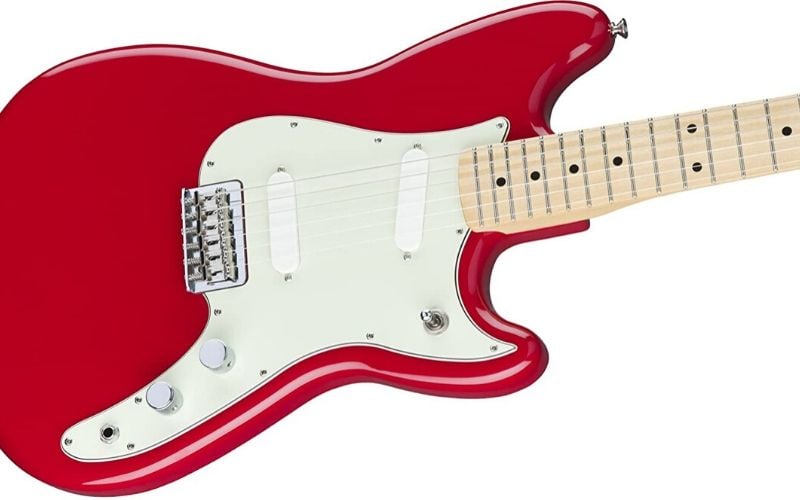 It is a solid body made from one-piece of Alder. It is finished in a great, almost vintage, polyester red gloss finish. The pickguard is also typically Fender in shape and is made of plastic. There is a through-body design for stringing. It is simple and easy, with nothing complicated in the design or shape.

It doesn’t have the body contours of the Strat. And it doesn’t have the solid chunky one cutaway Telecaster style. It just sits in between them, even in its styling. At eight pounds, it is also very lightweight and great for students if that’s who chooses it.

This is one area where manufacturers can sometimes get it wrong when making a budget range guitar. After all, that is what Fender is doing here. But they have got this neck about right, I think.

It is a short scale neck at 24 inches, hence the ¾ size description it gets. The original, of course, was even smaller at 22 inches. The neck is made from Maple, which makes it very stylish, and it sits great with the red gloss. And it has that comfortable and popular Fender ‘C’ shape. It is, of course, a bolt-on design with a truss rod. 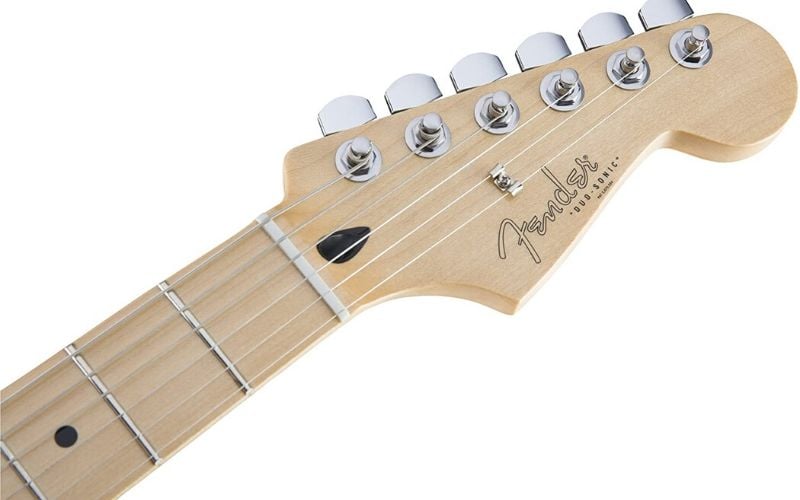 The neck has a satin polyurethane finish. There are 22 medium-jumbo size frets, all of which are available courtesy of the cutaway. This number as against the 21 frets of the original 60s version. The neck has traditional black dot inlays for the Maple neck. The nut width is a comfortable 1.65 inches.

It is a comfortably playable neck made with good wood and a nice finish. All things considered, Fender has done a decent job with the neck – very playable.

The Hardware is also often an area where cutbacks are made for budget range guitars. With the Duo-Sonic, there is nothing special in the materials or the design. It is all functional and quite ordinary. 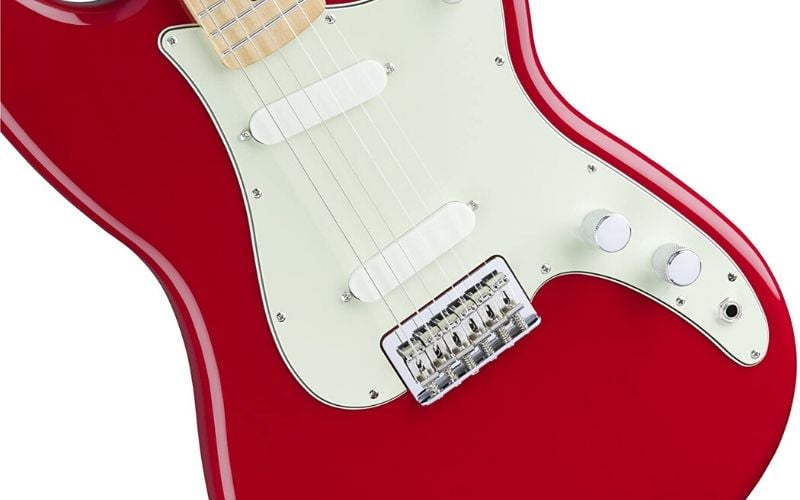 Up at the top, it has a smaller ‘pre-CBS’ headstock that has six Fender standard machine heads. They are die-cast nickel with chrome plating and are sealed units. It has a fixed hardtail bridge to allow the through the body stringing we have already mentioned.

Through the body, stringing is often seen as a productive design feature as it allows more sustain. The bridge has six bent saddles. The controls are positioned on the scratchplate, where there is a jack socket input and a three-way pickup selector toggle switch. There is also a volume and tone control. All well-positioned and easy to identify and use.

This being a Fender, it won’t be to anyone’s surprise that we have two Fender single-coil pickups. They are passive pickups with an SS configuration, which simply means two single coils. The bridge pickup is straight, and the neck pickup angled.

The controls which we have already mentioned feature a master volume and tone control. The toggle switch is three-way and gives you either neck or bridge pickup or a combination of both. When combined, the sound has a much rougher edge. Not the best pickups around by any stretch of the imagination but about adequate.

As we said earlier, it has a strange sound and sits halfway between a Tele and a Strat. We say strange because you would expect it to be more like one than the other, but it isn’t. It has a crisp and sharp sound from the bridge and a warmer softer sound from the neck. That, of course, is not unusual.

But put them together, though, and it starts to wind up a bit and is almost humbucker in tone and sound.

Good for a first instrument…

The overall sound though, is nothing to write home about. It is probably very good for a starter instrument but not an awful lot more. Having said that, you could have said exactly the same thing about the original. That spawned a whole new underground movement, so what do we know.

Perhaps there will be another with the Fender Duo-Sonic leading the way. We aren’t holding our breath on that one though.

You can’t help but like playing this Fender, mainly because the shorter scale and the ‘C’ neck make it so easy. The only by-product sometimes overlooked regarding short necks is that they require less string tension.

That brings a few advantages…

One is that you can use heavier gauge strings. As the tension is less, you can bend them inside out, whereas, on a full-size, you might need a G-clamp to move them. Thicker gauge strings tend to produce meatier sounds, so there is a big plus there if that is the sound you want.

The neck with its comfortable shape is the reason so many people will like to play this guitar. And it is going to make a great starter instrument for players with smaller hands.

But, if you’ve got your heart set on a Fender, take a look at our in-depth reviews of the Fender Player Stratocaster, the Fender American Professional Jazzmaster, and our Squire by Fender Classic Telecaster review.

We cannot get past the idea that this is a guitar suitable for a beginner. But really it is so much more than that. It might be smaller than the norm, and it might look like a toy in the hands of a 6-foot six-inch player, but like the originals, it has something that is quite good. But it’s quite hard to put your finger on just what it is.

We are Fender People, playing them virtually all the time, over more years than we wish to remember. But in recent months, we have been highly critical of the company’s direction and the quality of what they produce. But there is just something about this Duo-Sonic that we like.

Looking at it, there is a plain simplicity. Nothing gregarious or placed there to attract the eye. It is simple. The SS configuration is ok and what you would expect and even hope for. And it produces a Fender sound, but a different sound. Especially when the two pickups are combined, it screams at you a bit then.

And of course, with that neck, it plays so well. It could be a combination of a few things that make this guitar a decent choice.

Whatever it is, it is good, and we like it…

Unfortunately, and we say this with reticence, it is a little expensive. But then I suppose Fender guitars usually are. But this price point is quite high. And if you view it as a starter instrument, then it is a lot more expensive than most. That would be the only real negative we could find about this guitar.

This is a decent Made in Mexico effort and certainly worth a closer look. If you are a starter, you will be very excited by it. And if you are someone looking for a new sound, you might be surprised. And doesn’t it look great in its nice new red clothes? That takes you back a few years. Take a look, and you won’t be disappointed.

Find out more about Art and our other writers by clicking HERE.