I think it’s a lot of young people’s dream to own a Fender when they are starting out. It certainly was with us. In those days, there were no ‘local’ guitar shops at first. We had to go on the Tube train to the West End of London, to Shaftesbury Avenue.

We’d make a day of it. Take some sandwiches and a drink and wander in and out of a dozen or so shops. We got to know the people, and if the shop was quiet, maybe they’d let you try one. There weren’t many Fenders though and not a Gibson in sight. The Gibsons came later.

At the same time…

The Beatles became too big for Liverpool, and music venues began to appear as if from nowhere. So did the guitar shops, and as everyone with two arms and a head joined a band, and the instrument shops appeared. So did the Fenders. The local guys, Blackmore, Page, Townshend, and a lot of others, needed guitars. Good ones.

We will never forget Mrs. Smith. She had a record shop not far from Jim Marshall’s now growing ‘Mecca of Loud.’ He built her listening booths for her free of charge. That was ‘our Jim.’ We were always in there listening to the latest stuff from both sides of the Atlantic. She started selling guitars. The acoustics at first, then Hofner and Framus electric… 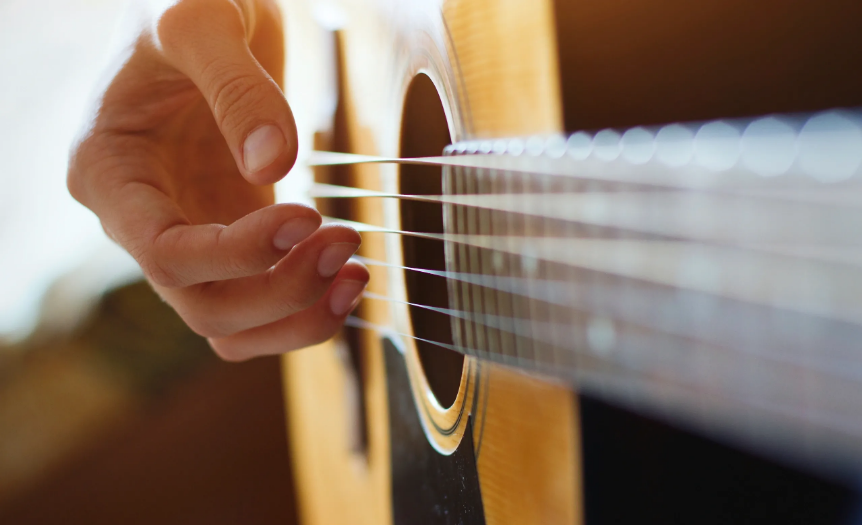 She got a Telecaster and a Precision Bass. We would stand and stare through the window at this bass that seemed as big as we were. She let us try it. Wow. We were hooked. Mrs.Smith kicked off a lifetime’s activity. Thank you.

Fender, though, is a magical name. And we all think the same, Telecaster and Precision, Stratocaster and Jazz bass and a few others in between. Instruments that in some ways changed the world for us 60s kids and for many who followed. Leo Fender and Jim Marshall. Where would we be without them? Still singing ‘How much is that doggy in the window” probably.

Fender released their first acoustic guitar in 1963. No doubt, aware of the sudden arrival of folk music commercially. Mainly through the mercurial, magical, and mysterious Bob Dylan and the great Joan Baez. Folk music had always been there, of course. But those two, and a few others and later Paul Simon brought this ‘unplugged’ music into our consciousness. 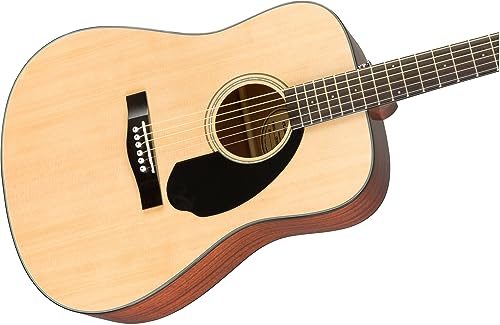 This is sacrilege for us to say, but the first acoustic Fenders weren’t so good. They got there act together quickly. They had to.

Nowadays they make very good acoustics at every level. Today though, we look at one of their entry-level acoustics in this Fender Classic Design CD-60S Review.

An entry-level Fender. Can you imagine?

A guitar cheap enough for a starter to buy, with Fender written on it. Unheard of in our day. Maybe we were born in the wrong era. On second thoughts, maybe we weren’t.

The CD 60S seems to be an excellent guitar for a beginner, it looks the part with its classic Dreadnought style body, and it has the sound to appeal to a young player. One of its great assets is that it can fit neatly into just about the style of music.

The really great thing about it, though, is how it plays. This is, after all, a budget starter guitar. When you try out one of those, you don’t expect a great playing experience. With cheap guitars, corners have to be cut to get the price down. Sometimes those corners involve how the guitar plays. Not with this one. More on this later.

So, let’s take a closer look at how it’s put together. Let’s see if this is the best Fender beginner guitar…

We would agree it has a plain and simple design. Nothing fancy to discuss. You couldn’t say it is a beautiful guitar. It has an elegant feel about it, though, which comes from its simplistic design. It is well-built with its Dreadnought body style. This will give it a big voice and projection.

Because of problems in the past, Fender has a quality control team that inspects everything. The quality of the construction is high on the list. Most Fenders are now made in the Far East, and so the construction process is vital. Materials used are also very important.

The back and sides are built from solid mahogany. Mahogany became popular in making the guitar body for several reasons. It is now the most commonly used hardwood and is attractive and extremely resonant, giving a warm, rich sound. It is an excellent wood for delivering a great sound from low-mids and bass.

Plus, it is also a lot cheaper and more readily available than Rosewood. Good quality mahogany will improve with age, and the sound will improve. Finally, it is durable and less likely to warp than some other woods, therefore making it a good choice.

Internally the body has a scalloped X bracing system. This is an added protection for its durability in shape, but it also helps to project the sound. Good bracing can make all the difference.

The top is made from Spruce. Spruce is also a commonly used wood for the tops of guitars. There is a good reason for this. Its natural tone makes it suitable for all genres of music. It is what you could call a good all-rounder.

Cedar is also sometimes used for the tops of guitars. But where Cedar radiates the sound of the instrument, Spruce will give it more projection. Spruce is full of tonal variety. An experienced player will be able to use their touch and feel to generate a variety of tones from Spruce. This makes it an excellent wood for the top where a lot of the high-frequency sound is generated.

Of course, one other aspect is that it looks good. There is a very attractive binding around the body edges and the standard scratchplate. This overall appearance is helped by the CD Pearloid decor around the soundhole. And on the CD-60S, it does look exceptionally good.

This is an area so often overlooked when people are buying a guitar. Especially a guitar for a starter. They tend to look at the body and what it looks like. This is ok, but the neck will determine to a great extent how it plays. That is quite important for all players but very important to a beginner. If the neck is all wrong, they won’t be able to play it. They will give up, and the next Mark Knopfler will be lost to the world.

The CD-60S has a mahogany neck. A good construction choice as it is less likely to warp and very durable, as we have already said in the Body section. 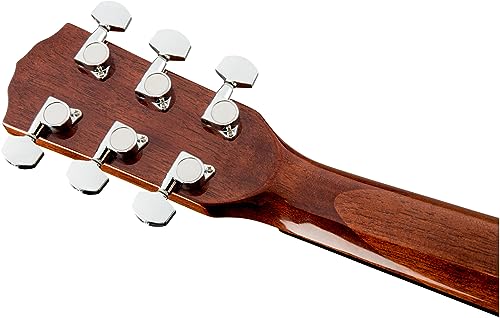 The neck is a 25.3-inch scale size with 20 frets. It has a dual-action truss rod. The fingerboard is made from Walnut and has rolled edges. This makes it easier and more comfortable to play. This is an essential quality for any young player. It needs to feel right in the hand, and with its rolled edges, it feels good.

Dotted inlays run the length of the fingerboard in traditional style. It has a nice near-C shaped design that is easy on the hand.

Another important area that is often taken for granted.

Why is it important? If you have bad tuners, it won’t stay in tune. It’s that simple. That is quite an important point. The CD-60S has chrome die-cast tuners. These are closed tuners with no mechanics in view. They are quite sturdy and do not feel weak. They are also not stiff when being used and rotate cleanly for an accurate tuning process. Once the strings have bedded in, they become the prime source of the guitar, maintaining its tuning. 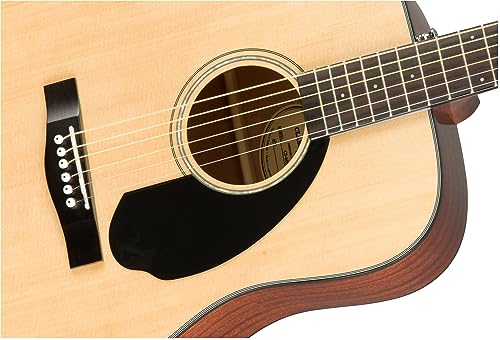 There is a walnut bridge with dotted strings fixers. Fender has made sure that the hardware and fittings, whilst basic, are also functional.

On a side note, if you’re not sure of the string choice for this or any other guitar, please check out our reviews of the best acoustic guitar strings.

We mentioned earlier about how well it would play, given its an entry-level instrument. If ever an entry-level guitar played as good as it looks then this could be it. This alone means it should be considered as the best Fender beginner’s guitar. It feels good with a nice action that is helped by the rolled fingerboard. The action is smooth, though, of course, each instrument is different, and some may require setting up.

Perhaps the most important aspect, though, is the comfort level. The neck is not too wide, and the near C shape design gives it an easy feel. This does not put too much pressure on the action, which can be adjusted.

For a budget level guitar, it plays nicely. More importantly, for the beginner, it plays easily.

When considering how an instrument sounds, you must place it into context. This is a starter-level guitar, not a thousand dollar professional instrument. It is not going to reach those heights of quality, that simply isn’t possible. It may not have the definition and clarity of an expensive instrument. If you are looking for that, you are in the wrong place with this guitar.

This guitar comes with a nice rich tone where the low frequencies are concerned. Created by the mahogany woods, it has a nice depth. The highs are crisp and ‘Spruce-like.’ This gives it a very nice sound, and the projection offered by the Spruce top gives good sustain.

It, therefore, will fit comfortably into any genre of music. Within its price bracket, the sound can only be described as excellent value. Make sure it has good strings, and the sound will be impressive.

If you like the sound of this guitar and love the Fender name and heritage, but want a few more options, please check out our Fender FA 100 Review and our review of the Fender CD 140SCE Acoustic. Also, take a look at our general reviews of the best cheap acoustic guitars under 200 and the best acoustic guitars for beginners for some other excellent options.

Is this the best Fender Beginner guitar?

If you are not expecting a concert, professional-level quality, then you are not going to be disappointed with this instrument. Within its price range, it is hard to envisage there being a better playing and sounding competitor.

Well made with good materials and with an attractive traditional Dreadnought look. As well as decent hardware and fittings. It plays easily and sounds very nice indeed. Very cheap, cost-effective price considering what you are getting.

Is there anything else you could ask for?

It is possible from a value for money view to call this the best Fender beginner guitar. We would not argue.