Mention the name Fender to anyone, even non-musicians, and of course, they think of guitars. In fact, it means more than just guitars it means electric guitars. In fact, if we are honest, it probably means Precision, Stratocaster, Telecaster, and Jazz. The names that created a legacy, inspired a generation, and still does.

We do not however naturally always associate this iconic name with Acoustic or Acoustic-Electric guitars even though over the years they have made some good instruments.

Quite a few years ago, we sat in a recording studio, and someone brought an acoustic Fender in. A big dreadnought style, and said try that. Fifteen seconds later the guitar player put it down. He wasn’t impressed at all and went back to his Japanese Yamaha.


Check Price On Amazon
But, times have changed…

…somewhat and someone in the ‘halls of the mighty’; worked out they needed to be a bit better. Quite a bit better if they wanted to compete.

It is unlikely they had ever seen themselves as competing with Martin or Gibson in this market; they were rock n’ rollers. But there is a big market out there, and Fender had to get a bit of it.

Today they make a series of acoustic and acoustic-electric that have moved on a bit. They are accomplished instruments with a lot more to offer than just the name on the headstock.

It has now moved far higher up in the list of the best acoustic guitar brands.

First impressions are good. Nicely finished and presented with its classic single cutaway Dreadnought body style, decoration around the sound hole and nice pickguard, it looks the part.

One of the things we liked about this guitar was that the body is rosewood. Traditionally this is not always the case, often mahogany is chosen as the first choice, but rosewood does offer a warm tone and especially when it has a spruce top.

These two kinds of wood combine to give you a very special sound that can be warm and gentle but can also spring to life when the guitar is used with a bit more volume.

A warmth and deep resonance… 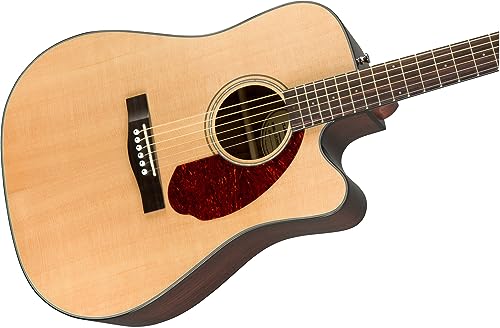 A spruce top always gives you a bright sound and so it is with this guitar. It has a bright top end but retains warmth and deep resonance and the sound rings out whether your finger-picking or strumming.

Inside the body is the scalloped ‘X’ bracing that has become standard on well-built instruments.

It is now recognized that having scalloped bracing makes the guitar very responsive and gives it a lot more resonance and bottom end. They are sometimes also louder than those without such a configuration which use the conventional straight brace design.

To check your guitar has this scalloped brace you should see it at the center of the ‘X’ as being its highest point.

Playability all the way to the neck…

The neck is mahogany with a rosewood fingerboard. Fairly standard combination but the fingerboard has rolled edges which give it an ease and comfort to the playing style. With the neck shape and its general feel, this is a great guitar to play, and the playability is felt all the way to the top of the neck’s twenty frets.

All the way up to the rosewood headcap this guitar looks the part. You sense a great deal of effort has gone into making this attractive visually.

Ok, so the visuals work, and it looks nice, but what about the fittings?

Adequate without being over-adventurous is maybe the best way to describe them. The tuners are basic but do the job, and there is a Graph Tech nut and bridge saddle. The bridge choice, of course, is not to everyone’s liking.

This is one area where the guitar scores points and really begins to impress. It has a Fishman Presys preamp and a Fishman Sonicore pickup. This is a high-quality setup and will give a great sound when you amplify it.

The controls are quite extensive for an acoustic-electric arrangement. It has a volume and bass, middle and treble controls. An onboard tuner is always a good idea, and there is an LED indicator to show battery status. 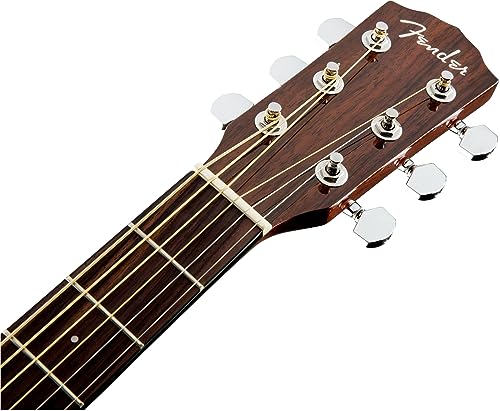 There is easy access to the 9v battery that is required.

There is also a phase control to really open up some interesting sound options.

This is on a par with guitars costing a lot more and certainly, the sound options catch the eye and the ear.

We think it is very important that you know why you are buying it. It may be of course that you’ve just always wanted one and aren’t that concerned about the spec and what it can and can’t do. Most of us, though, will be buying for a reason, and there are things to consider.

This Fender will perform some tasks very well indeed but might not be so good at some others.

Some players see a Dreadnought shape instrument and immediately assume you can play any style of music on it and it will be ok. As an example, I would not think that re-stringing this guitar with nylon strings will make it into a classical guitar. 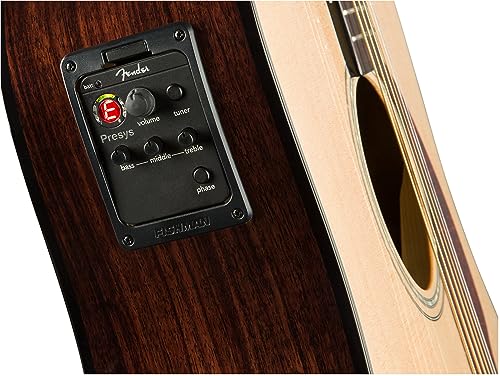 It is though it must be said, a guitar that will handle most styles of music.

This includes fingerpicking as well as hard or light strumming.

It will operate at both ends of the volume scale from a delicate warm solo sound to a full-on rock band. And after all not many people know more about creating guitars for rock bands than Fender.

As a first ‘learner’ guitar it has some Pros and Cons

Firstly, it will impress the student with its look. So often guitars made to learn on, end up looking more like toys. This, of course, doesn’t. It has the look but backs it up with its playability and sound.

Secondly, the rolled fingerboard edges make it easy and comfortable to play. There’s nothing worse than a student having to fight the guitar because the neck and the action are awful.

Thirdly, Even acoustically it produces a warm, resonant sound that is great to hear.

Just one thing really comes to mind, and that is despite all the many positives for using this guitar with a student, and we have identified just a few, the most important thing to consider is that it is a full-size dreadnought style, so they have got to be able to handle that.

Perhaps one other thing to think about if this is for a learner, is that it’s not a cheap option.

It has been a long time since that guy brought a Fender acoustic into the studio and it was discarded as being inferior, especially in sound. Today’s Fender acoustic-electrics are quality guitars set at a reasonable price.

They are made from quality materials with real care being taken in the critical areas. They are well-constructed, this model in Indonesia, and manufactured to a high spec.

This particular instrument, the Fender CD-140SCE, is a great guitar and plays and sounds like a guitar many times its price.

It would be great to learn on, but it is also an accomplished guitar for the experienced player.

If it were delivered to that studio today it would not be discarded; it is just too good. 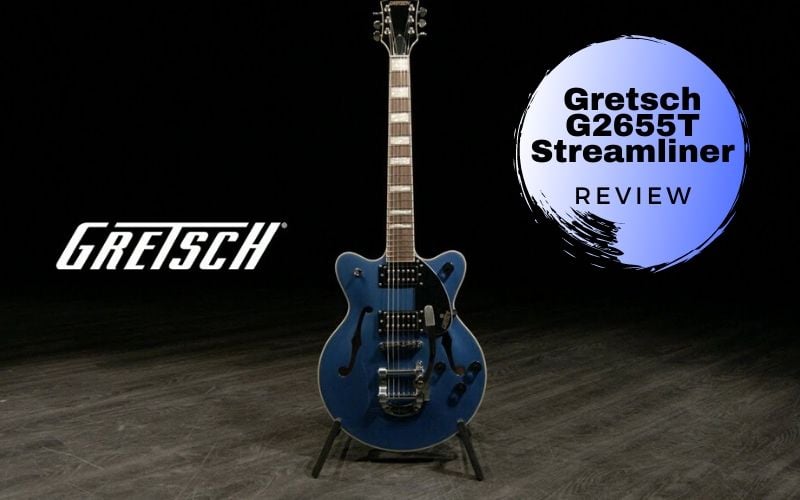 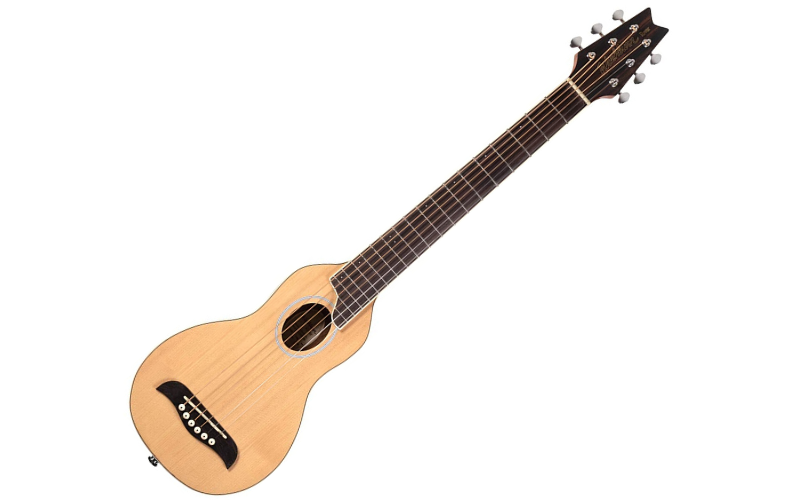 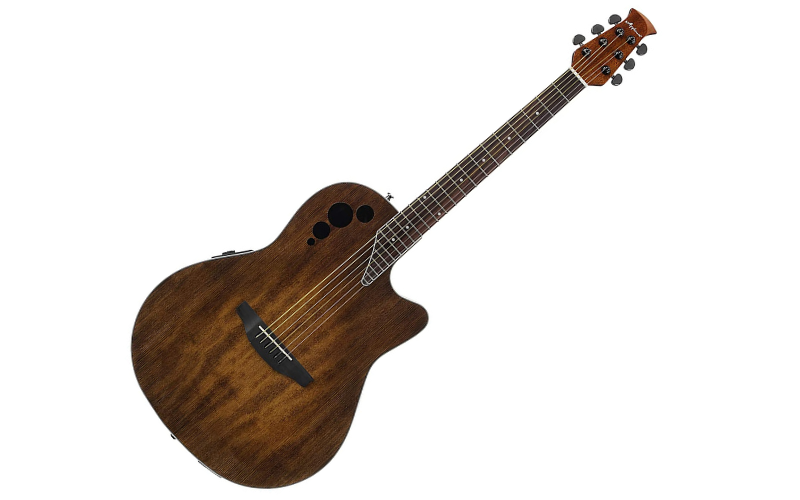