When you think of Fender guitars, the Fender American Professional Jazzmaster is not the first that comes to mind. We don’t need to spend any time discussing Fender. We all know the story. But it is clear to most people that they had an incredibly fertile period. The time when they were at their very best was when Leo was the Boss. But as soon as CBS went anywhere near it, things started to go a little downhill.

That period though, from about 1950 brought forth some of the most iconic guitars in history. The Telecaster and the Stratocaster. The Precision and the Jazz bass. But it also brought forth some great guitars that maybe never achieved the recognition they deserved. It is very difficult to follow the Tele and the Strat. And one of those guitars that went a little under the radar was the Jazzmaster.

After being discontinued for a while in the Fender catalog, it made its triumphant return, and we now have the guitar we’ll be featuring in this Fender American Professional Jazzmaster review.

First brought out by Fender in 1958 when Leo was at his peak, this was supposed to be an upgrade to the Stratocaster. Hard to imagine that today, but it was certainly more expensive at the time. As the name implies, it was aimed at the still popular jazz market.

It is similar and was a forerunner to the later Fender Jaguar, which was launched in 1962. The similarities were plenty, especially in its styling. Though the Jaguar sounded different and had different pickups and controls, as well as a shorter scale length.

It had different styling to most others in the Fender range. It had a 25 and a half-inch scale length and circuits that allowed you to switch between rhythm sounds and lead solo boost. The floating tremolo arm was unique, as was the bridge, which was important in the guitar’s character. 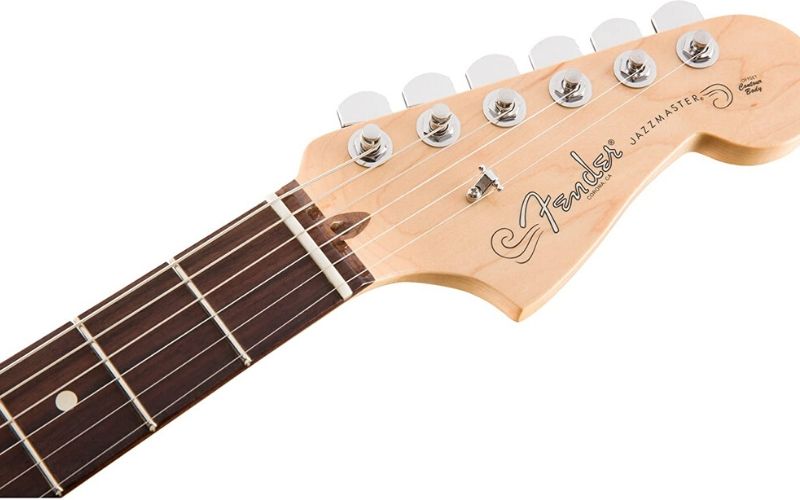 The body was larger than other Fender guitars, which may not have helped it. But it was great for sitting and playing, which is what most jazz players do. It was also the first Fender guitar to use a Rosewood fingerboard. It was produced from 1958 to 1980 when it was considered surplus to requirements, and then it was goodbye.

Jazz guitarists had become few and far between by that time, and now it was all about rock, volume, and wearing silly hats. At the end of its first life, it was being assembled from old bits of wood lying about. A shameful indictment of what was the ‘upgrade to the Strat.’

Its presence though was kept alive because it was the guitar of choice of a lot of the ‘surf kids.’ The Ventures used them as did the Surfaris. Even though the surf thing had pretty much died, the visuals were still there.

Down of a new era…

Elvis Costello remained faithful to the instrument, and it began to develop a specialized and highly-appreciative following.

It was re-introduced at various pricing levels in 1984 and has remained in the Fender catalog ever since.

So, let’s have a closer look at what Fender is doing with it now…

Fender might have discontinued the Jazzmaster, but it had a small army of fans that would not go quietly. In fact, as time went on, it became a little bit of a cult guitar with people like Elvis Costello championing it. It developed this ‘anti-Fender’; we are not going to play a Strat or Tele guitar mood. This made it a hero in the ‘Indie’ world.

It was re-popularised by bands who didn’t want the ‘traditional’ Fender or Gibson look, acts such as Radiohead, Sonic Youth, Dinasour Jr., My Bloody Valentine, Wilko, and the Flaming Lips. And then subsequently by all the bands that were influenced by them. 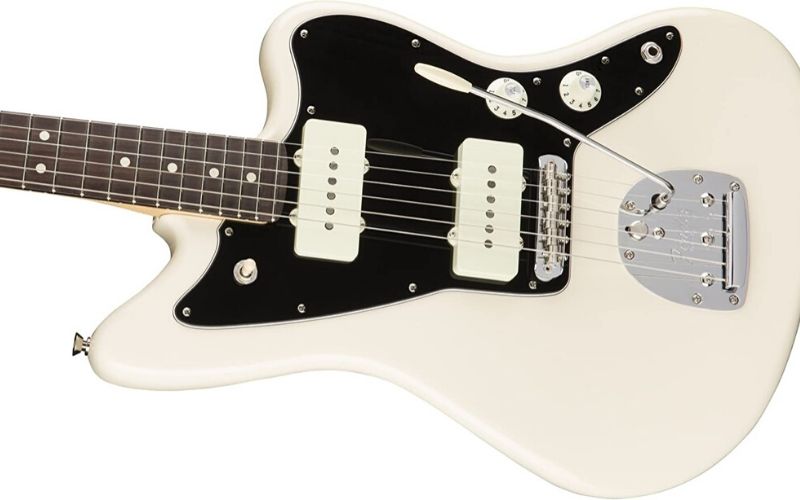 Its reintroduction raised a few eyebrows at the time. But it is a worthy inclusion in the Fender catalog. However, if you are expecting the ‘vintage’ thing that Fender often does so badly, you will be disappointed. It might have the shape and the look of the old Jazzmaster, but it’s a different animal now.

Some will mourn its passing, while others will not be bothered. But we think a lot are going to be impressed with what is now on offer. The fact is they have taken this guitar and made it much more accessible to a wider audience. Something the old Jazzmaster could not do. It is available in a number of colors, but we are going to look at the Olympic White.

If you like the original shape, you are going to like this. Almost a carbon copy of the original, it still has that inevitable ‘surf’ feel to its look. The double-cutaway and its solid wood offset body shape take us back to a previous era. It looks good. 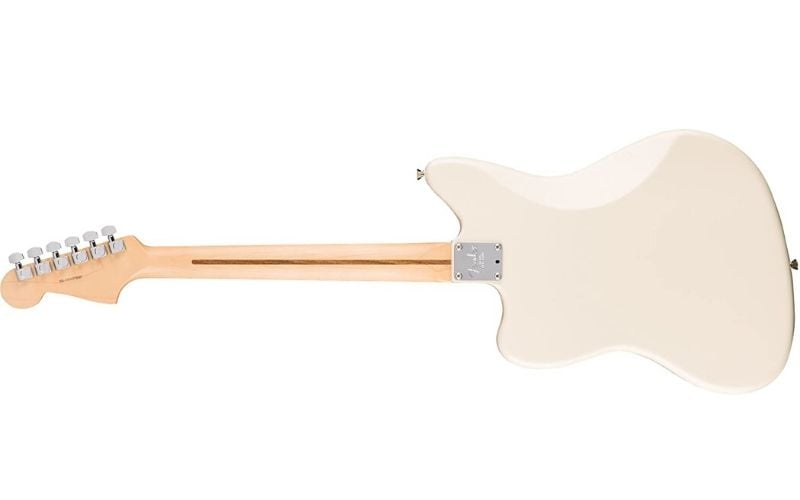 Made from Alder, of course, as many of the originals were. It will produce those classic Fender sounds that the use of Alder contributed so much to. Finished in Olympic White with a polyurethane gloss, it has a black scratchplate.

It is basic, but it’s nice. It is instantly recognizable for what it is, and we think Fender has done a good job of the body.

The neck by some standards is quite thick. It sits in its design somewhere in the middle of a U-shape and Modern thick C shape. It might take a bit of getting used to, and going from an original to this model; you will notice the difference.

It’s made of maple and has a Rosewood fretboard. It is the traditional Bolt-on fitting with a scale length of 25.5 inches and has the usual Fender satin finish giving it a smooth feel. There is a truss rod, of course, with 22 frets with dot inlays inset.

The original Jazzmaster experienced some problems with its bridge and the tremolo arm. It was renowned for string slip and didn’t work so well with heavier gauge strings. Also, the bridge sat on a couple of fulcrum points and rocked forward and backward as the tremolo arm was used.

It was a system that reduces the natural sustain of the guitar. Some say it was a deliberate design to produce the short clipping sound it was capable of. Others say it was a design fault and the clipping wasn’t supposed to happen. Whatever it was, it produced a very unique sound that has now largely gone because of the re-design. 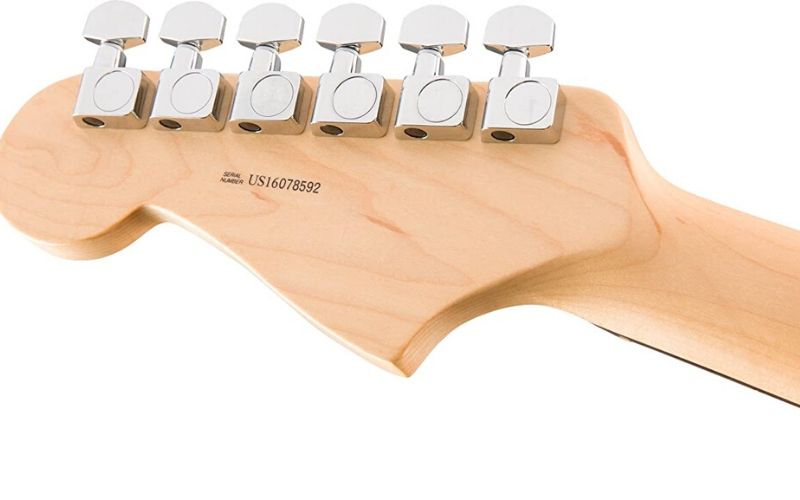 The re-design improves intonation and removes any unnecessary movement of the bridging system. It has also created a system where the screw-in tremolo arm actually stays where you want it to be. The bridge still has its critics, though, as the brass saddles aren’t adjustable.

The original switch positioned near the end of the neck operated a dual circuit that allowed you to switch between jazzy rhythm sounds to a boosted solo sound. That was the idea anyway. But that’s all changed, now it is a three-way toggle switch for pickup selection and sits on the scratchplate as we have already said. The volume and tone controls are also placed on the scratchplate sitting near the output jack socket.

The two seemingly huge single-coil pickups are attached to the body of the guitar, not the scratchplate. This was a good design feature as the four screws for each will give some adjustments to the height and tilt angle. Up at the top, there are the six nickel and chrome-plated sealed machine heads. There is also the over-sized Strat-like headstock, which was introduced in the CBS era.

Apart from the toggle switch, there hasn’t been much in the way of visual changes. There is a change in the sound, though, but more on this later.

There are two controls, master volume, and tone. The bridge and the neck pickups are the same. They have passive overwound Vmod single-coil pickups that have been re-designed for this guitar. They also feature a treble bleed circuit that maintains their sound even at lower volume settings.

The toggle switch will take you from neck to bridge pickups or a combination of both. There is though only one tone control. It would have been a great idea to add another tone control so that each pickup had its own, but obviously, Fender doesn’t agree.

Let us return to the change in the sound we mentioned earlier. If you were looking for a vintage sounding Jazzmaster, the guitar designed for the jazz guitar player, hide your ears. This is not going to give you that. In fact, this is the most un-Jazz sound you could probably find.

The overwound single-coil pickups give this guitar a real edge the original never had. It has been criticized for the Vmod pickups being too thin and not having any depth. There is an element of truth in that, but nevertheless, the sound is punchy, and the high frequencies very sharp. There is no doubt the sound is definitely Fender but is just different to the Strat and the Tele.

If we are looking for something to be critical of, then, it is only that it might be too bright. The top-end can be shattering at times. This leads us to think that maybe a dedicated tone control for each pickup might have been a good idea, as we said earlier.

The Fender Stratocaster and the Telecaster guitars are instantly recognizable, whereas the Jazzmaster probably isn’t. But it carries a unique sound that has got its place in today’s Fender catalog.

You may also need some cables? If so, take a look at our reviews of the Best Guitar Cables, the Best Patch Cables, or the Best XLR cables for Microphone currently available.

This is not a guitar that looks to the past. It is not traditional in its sound or in the functions it uses. It is a traditional guitar but with a new suit of clothes. And they look good to us. We like this guitar, which is interesting because we had no time for the original, just like many others didn’t.

This reincarnation, with its changes, doesn’t pretend. It is not labeled as ‘vintage.’ It isn’t a modern incarnation of an old idea. The idea has matured. It is not cheap at all. In fact, it is quite expensive. But if you want something that is different but also very good, this is a great choice. 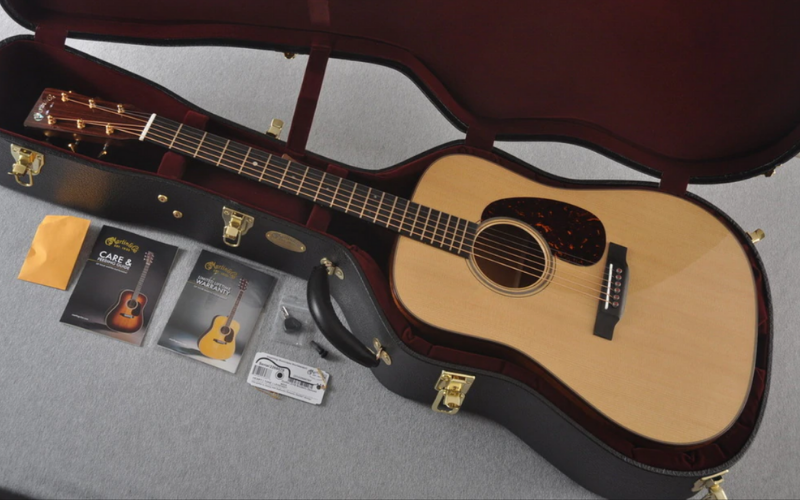 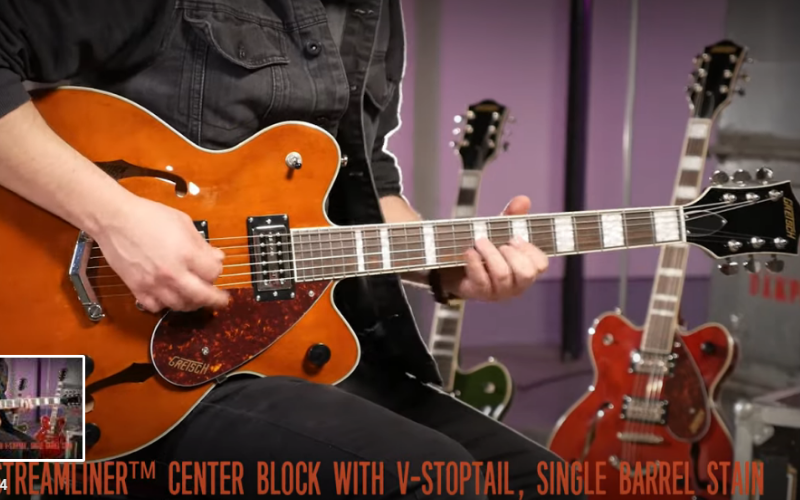