This segment of the electric guitar market is highly competitive. There are plenty of choices available with plenty of feature rich options to match. But despite the level of competition, from predominantly no-name brands, Epiphone still has a stronghold in this area and for good reason.

This is a flat bodied, solid guitar made from mahogany. Weighing in at close to 10lbs, it feels substantial. OK, noticeably lighter than a Gibson Les Paul, but you’re still going to feel it. As for the color, we’d honestly have to say that we love it. We think ebony really suits this design and helps to make it look a lot more expensive than it really is. But if black’s not your thing, there are other color variants to choose from.

At this point, it should be noted that although the guitar we are reviewing here today has a mahogany body and neck. However, the same model of guitar is readily available, constructed from different kinds of woods. 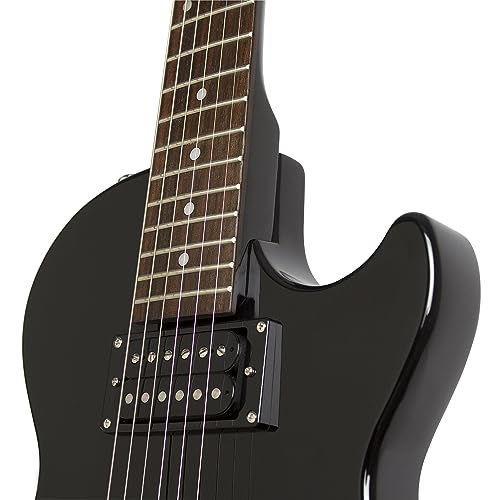 If you’re thinking of going ahead with buying a Les Paul Special II, be careful to check the specification sheet first. Make sure that the woods used in manufacturing the specific guitar you’re considering meet any criteria you might have.

If another wood has been used, though, there’s no real need to worry, as regardless of the woods used, it’s very unlikely to have any majorly noticeable or significant tonal impact. Although an electric guitars’ wood composition will affect it’s sound to some degree, you’re unlikely to notice any major differences. Furthermore, this is likely to be even more the case when using a less expensive guitar through a less expensive amplifier.

Moving on to the neck…

This is also mahogany, with a rosewood fretboard. It is mated to the body with a bolt on design. Though a bolt on neck is not what you’d typically expect to find on a Les Paul style guitar, it doesn’t unduly affect the overall aesthetic.

The fact is that a bolt on neck is just one of those compromises you have to accept at this price point. However, although this may have been an exercise in cost containment, there are plenty of high quality and expensive guitars of alternate designs with bolt on necks.

Could do with a little finishing…

The Les Paul Special II has a 12” radius and is relatively wide and flat. Not too difficult to get your hands around. Gibson style, this is a 22 fret, short-scaled fretboard measuring 24.75”, featuring standard dot inlays. 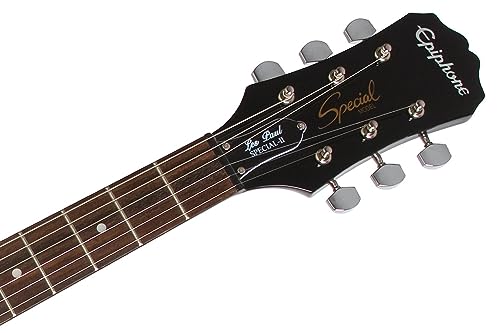 We did notice that the fret ends are not as smooth as we would like. They feel a little rough but are in the range of being acceptable. Despite the shortcoming of the fretboard ends, the actual frets and the neck feel nice. If it’s a real concern, you can get a local luthier to give it a quick once over.

Overall the Les Paul Special II has a feeling of being a well put together and well finished guitar.

Let’s get into it with the tuners. These are pretty much what you might expect on this kind of guitar. They’re OK but don’t look like they’re built to last and don’t have a quality feel to them. Authentic Gibson tuners come to mind. These are one of the weaker aspects of this guitar. Possibly a future Les Paul Special II upgrades project on the horizon for some of you.

The guitar comes with a nickel stopbar tailpiece and a LockTone Tune-O-Matic bridge. Hardware that you’d very probably expect to see on more expensive guitars. 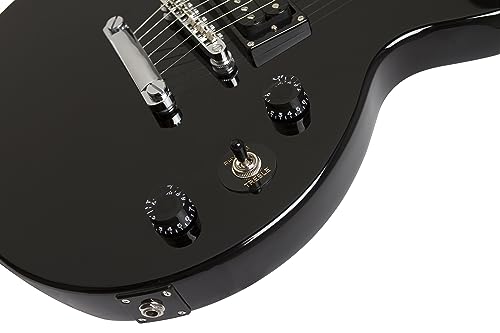 These are an Epiphone 650R humbucker at the neck and an Epiphone 700T humbucker at the bridge. These are high output humbuckers. Plenty of oomph in these babies for playing rock or heavier genres of music. Well, that’s nice. Yes, indeed, these are a much better quality of pick up than you’d find on most budget guitars. They also sound great. But more of that later.

Unlike on a Gibson Les Paul or some of the more expensive Epiphones, there is only one tone and one volume control knob. This is ever so slightly more limiting in terms of the tones the guitar can produce, but if we’re honest, 99% of all guitarists keep both tone controls on ten and only use one volume knob, so no real issues.

The three-way toggle switch to change between humbuckers, or a combination of the two, is placed between the volume and rhythm knobs. Now, the switch is familiar enough and looks like any three-way toggle you’d find on a Les Paul, but why place it down there?

It just feels in such an awkward and unnatural position. Why, didn’t they place it up in its normal spot by the neck pickup? It would certainly make more sense in terms of ease of operation and from a visual perspective. We just don’t get it. It’s probably to save money, but still??? Why?

Finally, one thing some of us might have liked to see on this guitar is a pickguard. We know, we know, before you all start shouting at your phones, tablets, and computers, this is not everyone’s style, nor everyone’s cup of tea. However, if, like some of us here, it’s something you’d like to have, it’s easy and cheap enough to add.

That’s, of course, if you don’t mind having to drill a couple of holes in your guitar first.

As mentioned before, this is a flat bodied guitar. One of the advantages of this is that when trying to access the higher notes on the fretboard, it’s easier to get your hands around than when playing a fatter, rounder, more traditional style of Les Paul. This is a useful feature for anyone picking up the guitar for the first time.

The Les Paul Special II’s flat body linked with its flat neck profile does make it relatively easy to play and so a good choice for beginners. Great. 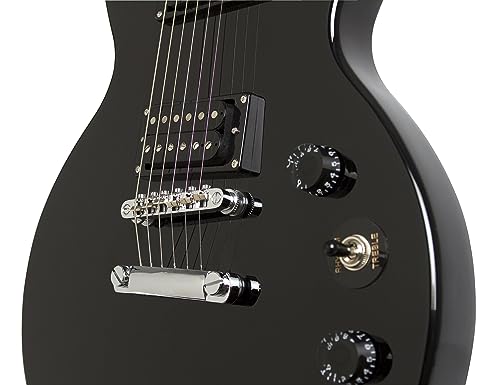 Before we even plugged it in, we noticed it had a surprisingly loud acoustic resonance. Though this is unlikely to impact on its tone when amplified, it does afford some limited scope to practice unamplified.

Yes, we know, and we agree, not ideal. Hopefully, you have either a headphone jack into your amp or live where noise is not an issue. But handy, never the less, for those late-night practice sessions in your bedroom whilst everyone else is asleep. Super.

OK, So Now We’re Plugged In, How Does It Sound?

Well pretty good, actually. There’s no doubt about it; you definitely get those Les Paul fat, heavy rock sounds from the two humbuckers. The quality of these pickups given the price of the guitar is excellent. They are punchy, warm, and well balanced. And react well to distortion while offering a good amount of sustain.

They have all the qualities that you’d expect from a good quality pair of humbuckers.

All in all, this is a great guitar for the price. Yes, there are a few moans and niggles, and yes, there are a few things we’d have liked Epiphone to have done differently. But regardless, it offers a great sounding and highly playable guitar at a surprisingly low price point.

This is a guitar that you can graduate from the bedroom to your first live gigs and stand on the stage in pride. The sound quality is sufficient to hold its ground and the Epiphone name to go with it.

The bottom line is, if you compare a no name alternative brand for a similar price, then we don’t think there’s any choice at all.