Any review of a jumbo-sized Epiphone guitar is inevitably going to draw comparisons to the legendary Gibson SJ 200. It has to. The Gibson J 200 is the king of the flat top guitars and an instrument virtually every acoustic guitarist would love to have in their collection.

But sadly, we can’t all afford a Gibson J 200. Given the fact that it’s ten times more expensive than our review model, this is hardly surprising. However, a lot more of us can afford an Epiphone.

So, let’s get this Epiphone EJ-200SCE Review underway and take a closer look.

The Epiphone EJ-200SCE Acoustic/Electric Guitar is a jumbo-sized guitar. Think if of a dreadnought but bigger again. There’s approximately enough wood in this thing to make a small-sized house.

This is a very well made and well-finished guitar manufactured in Korea. It has a solid spruce top and a laminate maple body. This is a flat-topped guitar, and unlike its expensive counterpart, it features non-scalloped bracing. 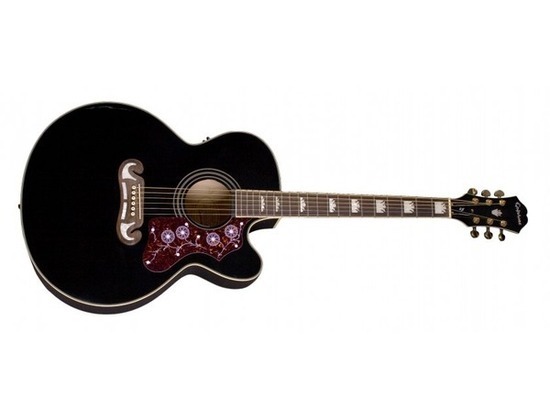 This does have some effect on its sound, which we’ll come to later.

The natural-finished version of this guitar does look a little light when combined with such a large body. But the good news is that after only a year or so, the wood will begin to naturally darken. This guitar really does age beautifully, and it’s a joy to watch the gradual process as the guitar matures.

The bridge is a poor man’s copy of the Gibson’s. It’s rosewood with Pearloid inlays and has the same mustache shape as the Gibson. But it’s thicker and has less refinement to it than the Gibson. Why Epiphone decided to add an extra couple of inlays at the end of the bridge’s mustache we’ve no idea? It really spoils the otherwise beautiful aesthetic of the guitar — bad idea.

The guitar has gold-plated Grover Rotomatic tuners. They look great, and what’s more, and more importantly, do an excellent job of keeping the guitar in tune.

All the hardware on the Epiphone EJ-200SCE Acoustic/Electric Guitar is gold-plated, and it set’s off the whole look and feel of the guitar to perfection. You should, however, expect the plating to start to slowly wear off after the first two or three years. 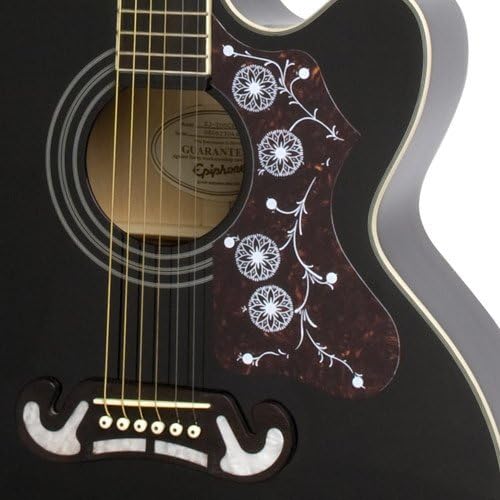 The slow erosion of the plating seems to tie in well with the rest of the guitar’s aging. Depending on your viewpoint, this might be either a positive or a negative — we kind of like it.

The Epiphone EJ 200SCE would not be complete without its floral design pickguard and soundhole rosette. There’s no doubt about it, these are well executed and make the guitar a joy to look at.

This is an electro-acoustic guitar with the preamp requiring two 2032 lithium batteries instead of the usual ubiquitous 9V batteries. The positives with this are that they’re both lightweight and have a longer life than their 9V counterparts. So, the good news is your guitar will now only weigh as much as a boat.

The bad news is that when your batteries die on you, good luck finding some spares if you didn’t bring any with you — no such hassles with the old-fashioned 9v batteries. Always a spare one in an unused pedal somewhere. 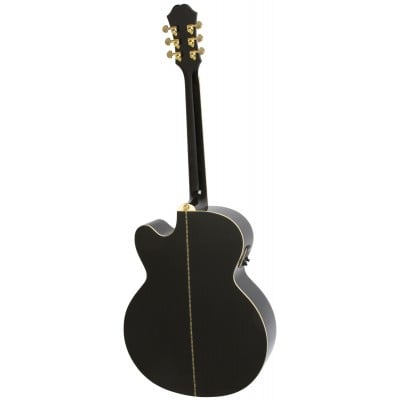 Now admittedly, there is a low battery indicator on the control panel, and you should pay attention to it.

What’s more, once you’ve finished tuning and the tuner is off, the light will turn off, and the batteries are therefore no longer in use. In theory, a least. However, unfortunately, it appears that there are some guitars that have had an issue with not disengaging the power once the tuner is turned off. Consequently, once you come to play your guitar again, the batteries are dead.

Something to keep in mind and check on when you first get your new guitar.

OK, there’s other stuff too, plenty. But yes, this is a jumbo guitar, and you’re going to have loads of volume and projection. If you’re playing it unplugged, there will be times when you’ll need to back off with your right hand somewhat. It’s a guitar that’s easily capable of overpowering everyone and everything in the room if you’re not careful.

Along with that volume and projection, there’s loads of bass to match. Again, hardly surprising. But the cool thing is the trebles are also strong enough to cut through. Also, the mids are nice and balanced.

Straight out of the box…

The Epiphone EJ 200SCE sounds brighter than you might expect, even from a guitar with maple back and sides. Also, the warmth and richness you’d anticipate is initially a little bit lacking. It is there, but you really need to be patient, because if you are then, you’ll be fully rewarded.

The fact is that this guitar, as with its color and finish, takes a little while to fully shine and mature. It’s still great from new, but give it a year or two, and you’ll be rewarded with an even fuller, richer and warmer sound.

The electronics on this state-of-the-art preamp include a Master Volume, a NanoFlex Tone, a NanoMag Tone, and a Stereo Blend. As well as a Low Battery indicator, and a Phase switch that will help eliminate any unwanted feedback. The preamp runs on a pair of 2032 lithium watch batteries that are not only lightweight but also provide a significantly longer lifespan than old-fashioned, heavy 9V batteries. 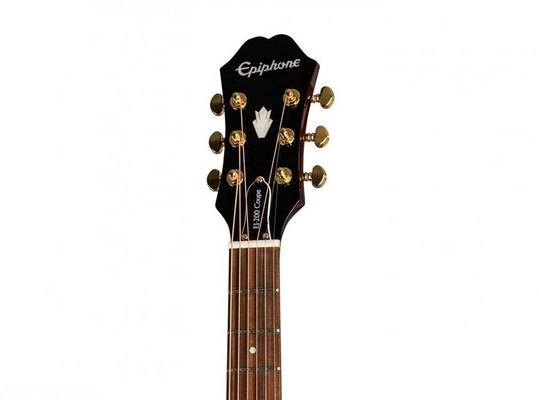 There are two Shadow pickups. One, a low impendence pickup, sits under the bridge. It’s a flexible material with built-in active electronics that conveys the guitar’s tone every bit as well as a piezo. The other, A NanoMag active pickup, is neatly and inconspicuously placed at the fretboard end.

A slider on the electronics panel allows you to blend the two pickups.

There’s a surprising amount of sound shaping, and it’s easy to get a good tone dialed in. The quality of amplified sound is natural sounding and as good as we’ve heard for an electro-acoustic at this price.

What’s really surprising about this guitar is how easy it is to play. It has a slimline 12” radius neck, which really defies the size of the guitar. This is the same size as you’d expect to find on most electric guitars. Nice. And if that’s not enough, it’s also easy to set it up to get a nice low action. To top it off, fret ends are nice and smooth.

That puts plenty of ticks into the easy to play column. The cutaway should also be a positive. It’s supposed to make access to the higher frets easier, which it undoubtedly does, but just not to the extent you’d expect from an acoustic cutaway guitar.

Let’s call it a minor positive on the playability front…

You see, the problem is that the neck joint into the body of the guitar is really large and bulky. So even with relatively large hands access past the fourteenth fret is a little tricky. Donald Trump would struggle big time.

The only real playability negative of the Epiphone EJ 200SCE is its size. It does take a bit of getting your arms around. Ok for some but not for others. For smaller adults and children, it’s certainly something to consider.

So, there you have it.

A really well-made guitar, with great electronics, that’s easy to play, sounds great and only gets better with age. There are a couple of moans and niggles; however, in the overall scheme of things, these are relatively minor. The fact is that there’s plenty to like here, not least, of course, is the price.

If your wallet doesn’t stretch to that other big Jumbo guitar, that we’re not going to mention by name, then the Epiphone EJ 200SCE should definitely be on your list.

Every house should have one.