Before we start our Epiphone AJ-220S review, did you know that Epiphone was founded in 1873 in Izmir, Turkey, where they made a variety of very basic musical instruments. It was a modest family business and a hundred and thirty years before the arrival of the Epiphone AJ-220S.

The family moved to New York in 1903, where they also started making mandolins. The founder, Anastasios Stathopoulos, died in 1915, and his son Epaminondas, or ‘Epi’ took over. They flourished and expanded into banjos and then in 1928 to guitars. They took on the name of Epiphone. Epi was always the driving force, and his death in 1943 produced problems.

After a four-month strike in 1951 which crippled them, they relocated to Pennsylvania. The death of one of the co-owner brothers, Frixo, left them vulnerable in many ways, and they were acquired by Gibson in 1957.

Epiphone had been Gibson’s main rival in the archtop market prior to 57. With the acquisition, Gibson had the idea of producing a range of guitars that would be similar to their own. But a little down market. Mistake. Epiphone was better at it in some ways than Gibson were.

Gibson had released their ES330 in 1959. It looked pretty, but it wasn’t good at all. A fully hollow version of the ES335, it had serious feedback problems. In 1961 Epiphone blew Gibson and their 330 away with their Epiphone Casino. Similar to the ES330 in many ways but also just better in every way.

Many of the big players of the day used it. John Lennon loved it, Paul McCartney had one, and there was always a Casino at a Beatles recording session. Keith Richards of the Rolling Stones, Dave Davies of the Kinks the list went on. The Casino ruled, the 330 nowhere. Poor old Gibson had their ego dented. The suits in Kalamazoo were not impressed.

Trouble was, Gibson was performing badly and buying up turntable and hi-fi companies. They had failed to produce a bass to really challenge Fender’s ‘big two’. And there was more to add to their woes. Hendrix, Blackmore, Gallagher, Gilmour, Beck, and others had followed Buddy Holly and the Shadows making the Strat, ‘the’ guitar.

In producing guitars, Gibson had lost their way, and they went bankrupt. For two years, no one wanted Gibson, and it eventually sold for just $5 million dollars. I bet “Epi” was smiling as he looked down. These days, Gibson bailed out of their financial mismanagement, still strut their stuff and look down on Epiphone.

They seem to try and make sure as many people as they can get, look down on them as well. Truth is, Epiphone produces very good guitars, and the gap that Gibson insists still exists is not so prominent anymore. In some cases, not there at all, in the opinions of some.

Pound for pound, when considering the outlay and what you get, Epiphone is better value. The Epiphone Casino is a valued guitar and still around and being used. The Gibson 33… what was it? Good on yer Epi and company.

So, let’s have a look at one of the new breed of guitars from Epiphone…

When you are looking to buy a quality acoustic, it is always important to check the wood used for the top. What wood is it? Is it one piece? The answer with this guitar is yes to both. Epiphone is serious about the quality of the sound of this guitar. 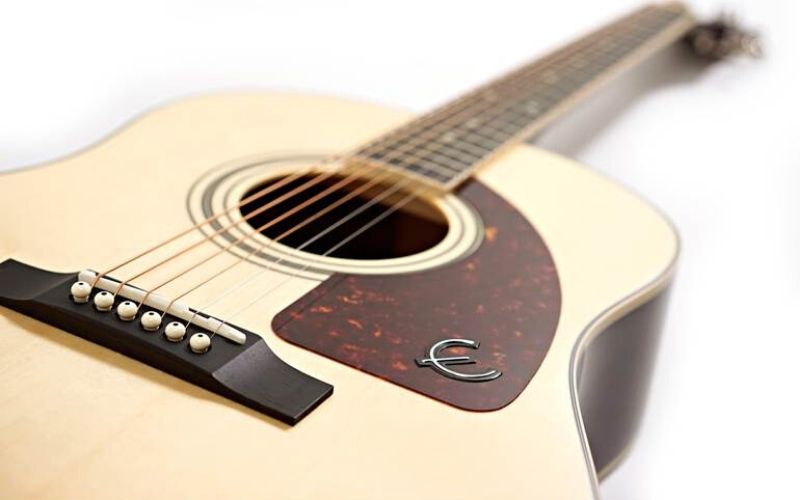 It has a big Jumbo shape that not only looks great but sounds it: quality materials, good design, and a great price ticket.

What more do you need?

Judging by the price tag, many might consider this an entry-level guitar. But it is much more than that. This is dressed up with a superb looking finish and has features you would only expect on higher-priced guitars. There is an awful lot to like about this guitar.

What is the first thing you consider when you go to buy a serious acoustic guitar? First comes the woods. The AJ-220S declares itself as a serious contender with a solid Sitka spruce top and Mahogany back and sides. A common pairing, of course, but the reason is the sound: rich harmonics, lots of tonal clarity, and great projection.

And how does it sound ten years later? 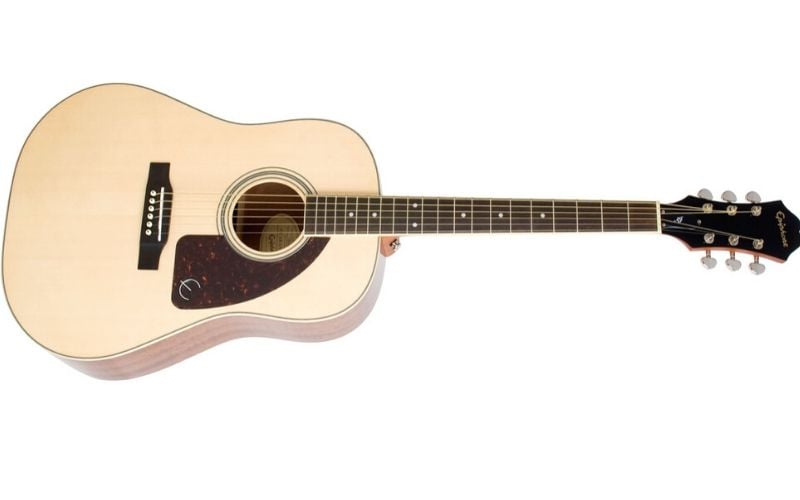 This is a jumbo design with its big-sounding chamber. The depth of the body and shoulder-width provides a cavernous sound chamber. It produces a sound that is full and very loud. The rest of the body, as we have said, is mahogany.

It has a great natural finish to the top wood that compliments the richness of the mahogany to make the look very impressive. There is a very traditional dark tortoiseshell scratchplate adorned proudly with the recognizable ‘E’ logo.

The body has a very understated edging and also an attractive rosette around the soundhole. One can only admit that it is impressive in every way.

This is also made from mahogany, which adds some strength to the guitar because of its stability and durability. It is fixed to the body with a dovetail joint that is glued in. There are discussions sometimes about the relative plus points of a jointed neck. It does though, help the tone of an acoustic guitar and prevents it from losing its subtle tonal changes.

It has a Rosewood fingerboard, another fairly common addition, but also a quality feature. This wood for the fingerboard adds some warmth to the sound and also gives the player a smooth feeling under the fingers. 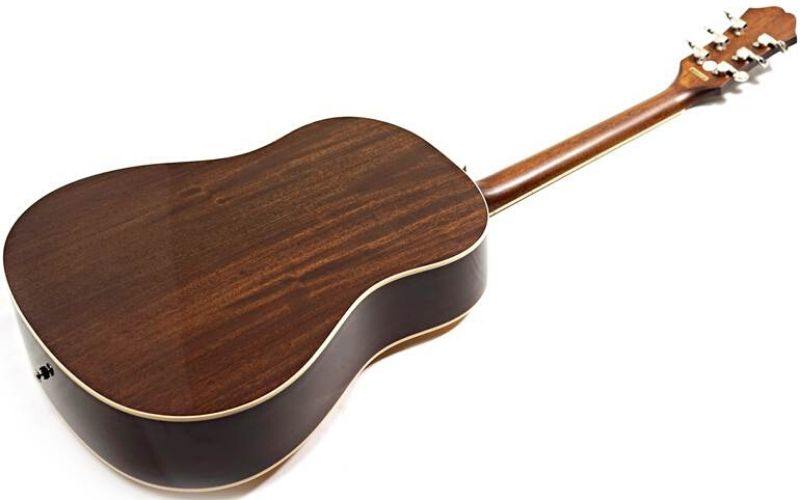 The profile of the neck is important for making the guitar comfortable and easy to play. This has a traditional slim tapered Epiphone neck, very similar to those found on most modern-day Gibson acoustics. It allows guitar players that might have smaller hands or even starters to feel comfortable. It has a 25 ½ inch scale.

There are 20 frets, of which 14 are easily reachable. As there is no cutaway any further up the fingerboard will take a bit of experience to play. Quite normal with a non-cutaway Jumbo design. The neck has standard Pearloid inlay dots and white edging on both neck side edges.

Good design and shape, and good materials, this neck encourages ease of playing. We shall look at this point a bit later.

Up at the top, there are sealed nickel die-cast tuners. Not the most expensive of hardware additions, but this is the functional aspect of the guitar, and they do their job. They have a ratio of 14:1. They are nicely finished and add a nice look to the headstock. Also, there is the Epiphone logo, as you would expect. 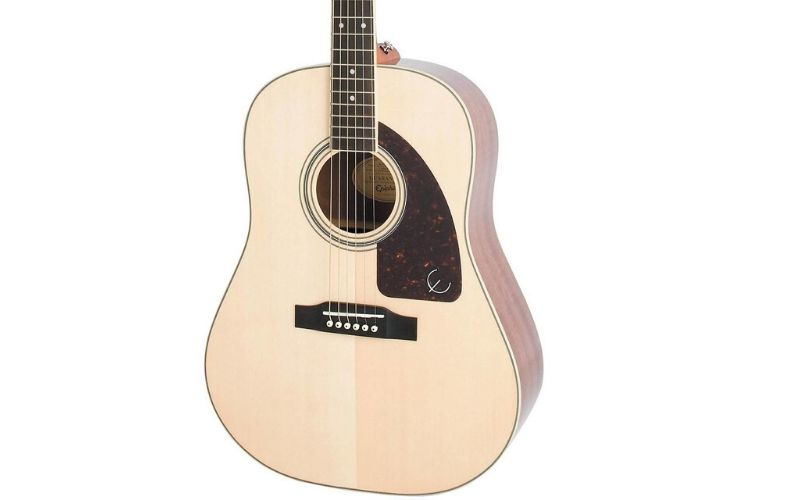 The nut is plastic, as is the saddle, which is a little disappointing given the quality of the rest of the materials used. It is not uncommon, of course, and can be found on a wide range of instruments. It does though, have a slight effect on the sound, tending to dampen the tone and sustain.

The nut has a width of 1.69 inches, which is a happy medium between the very thin necks and the larger ones. The bridge is Rosewood.

The hardware and associated equipment are functional rather than glamorous. But in the main, they do their job.

So this is where we get down to the fundamentals of what you are really looking for. It is nice to have a guitar with an impressive look and style. This Epiphone AJ-220S has that and a bit more.

But how does it play and what does it sound like?

It plays very well with its nice easy neck, but it feels like it is a guitar with a certain style in mind. We can definitely hear that ‘country-rock’ style with it. Possibly like you would hear with the early Eagles. It holds up well with finger-picking styles as well and generally feels very easy and comfortable in the hands.

One of the reasons it is easy to play is that it is a guitar that doesn’t make you work too hard. It is articulate and very tonal. The clear and bright top end cutting through, courtesy of the spruce top.

Being one-piece of wood, it is even brighter than cheaper cuts. The mahogany gives it a deep warm resonance. The overall Jumbo size gives you a big and expansive projection. It just all works together.

You can expect a great sound that is all-encompassing. On delivery, you may find it needs a setup. There is rarely a guitar that comes out of the factory that does not. You should invest a little in getting a pro to do that. This guitar is worth it. Once that is done, you are in for a treat.

But, whatever you choose, you will need a set of the Best Acoustic Guitar Strings every now and then.

You have realized by now we are impressed with this. It is not perfect, but then we’ve never played one that has been. When it is compared with similar price point guitars, there is no competition. It competes against the much higher value guitars and packs in just a great amount of quality at an amazing price.

It is priced at such a level that it would make a great starter guitar. But a beginner’s guitar, you may never have to change. For a pro, don’t discount it.

We’ll explain why in a minute…

It is made in China, and that should not be used as an excuse to discard it. The factory there is run by Epiphone with their quality control people overseeing everything. In any case, you would be surprised at just how many instruments are made there these days. It is not often we enclose testimonials, but we made an exception for this review.

So why shouldn’t a pro rule it out?

I HAVE A GIBSON HUMMINGBIRD ($3000.00 +) AND WANTED A KNOCK AROUND GUITAR FOR THE BEACH OR WHATEVER. THE EPIPHONE AJ200S ($xxx.xx) SOUND IS SUPERIOR TO MY GIBSON, HANDS DOWN. IF I HAD PURCHASED IT FIRST, I WOULD HAVE NEVER GOTTEN THE GIBSON.

In closing and going back to our opening comments, we had a look at a similar Gibson Jumbo acoustic. The prices varied a little, presumably depending on how much the retailer thought they could make. On average, it was near five times the price point of this guitar.

So what do I want 4-5 of these or just one of the others? No brainer for us. Well done, Epi. A very, very good guitar indeed. Not perfect, just very good. 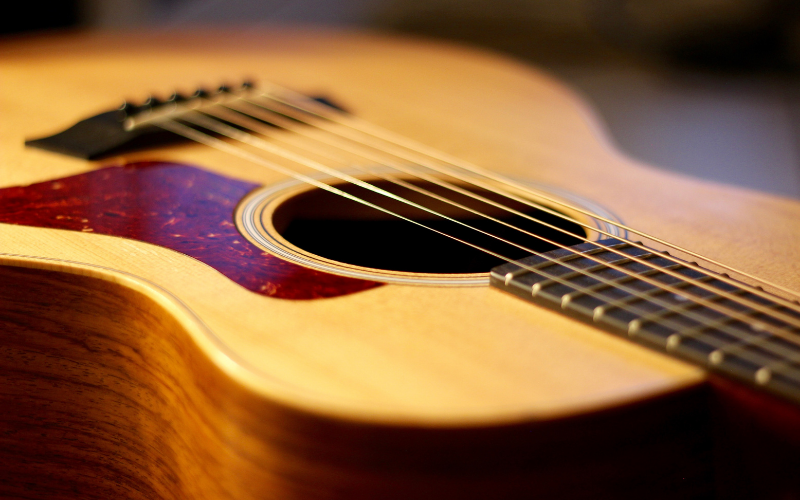 The Types of Guitar Finishes – Which is the Best? 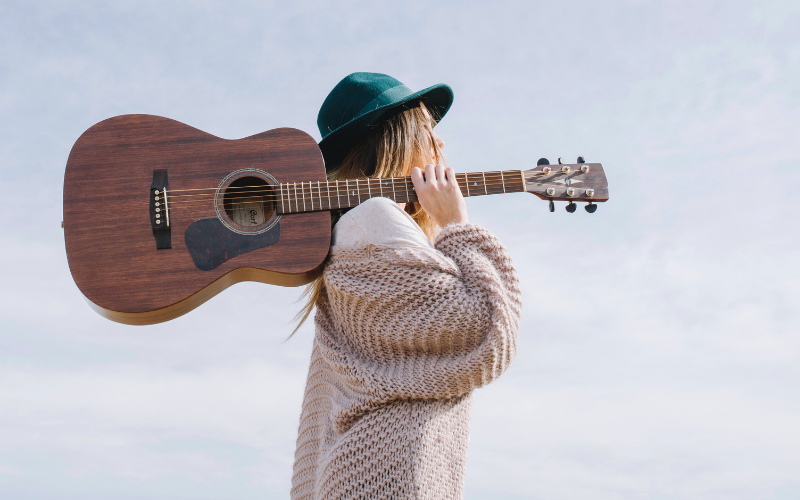 How Much Does It Cost to Ship a Guitar? 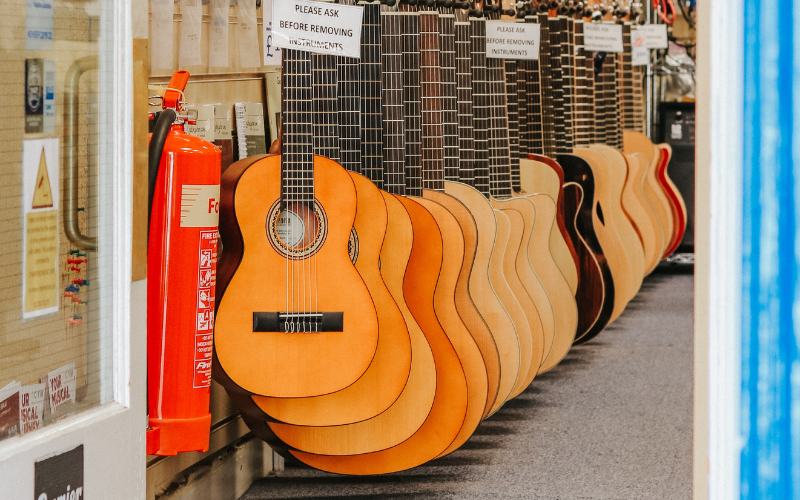 Acoustic vs Acoustic-Electric Guitar – Which is the Best?