For many guitar players, there has never been a world without effects pedals. But there was a time when you walked on a stage with a guitar and amp, and that was it. Someone once said, then you found out who could play and who couldn’t. Back then, guitarists weren’t buried in endless effects to make them sound better than they were.

Some effects have a ‘sound’ all their own. There will always be a place for Delay, Chorus, and Reverb. Possibly one or two others. But, there are some ‘fringe’ pedals that can make a big impact. The Pitch Shifter is one of those, and we’ll learn all about one of the best ones in this in-depth Electro-Harmonix Pitch Fork Review.

You won’t find many on the pedalboards of most players, but they can be an important tool if used well. And they are one of those pedals that not only create a sound, but they also fulfill a function, as we will find out later.

The Electro-Harmonix Pitch Fork is a pedal that is worth some consideration. But before we look at it, let’s remind ourselves about keyboard player and Bluesman, Mike Matthews, and his company.

Founded in 1968 in New York, they have become a well-known name in the world of the effects pedal. In the 70s, they had their ‘Foxey Lady’ manufactured through Guild Guitars. There was also the Treble Booster and the Bass Booster. And there were a few other legendary pedals called the Big Muff, the Electric Mistress, and the Memory Man. Perhaps you have heard of them?

Electro-Harmonix stopped making pedals in the 80s and sold branded vacuum tubes for amps. But the need for those early pedals was still there, and so they re-issued some of them in the 90s.

The new millennium saw an increase in the product range, and Electro-Harmonix established themselves as a pedal maker once again. To be fair, probably on the back of Dave Gilmour and others using the Big Muff. Not a bad testimonial to have though, is he?

Given that they can produce pedals for the high and mighty, what is the Electro-Harmonix Pitch Fork all about? Let’s take a look… 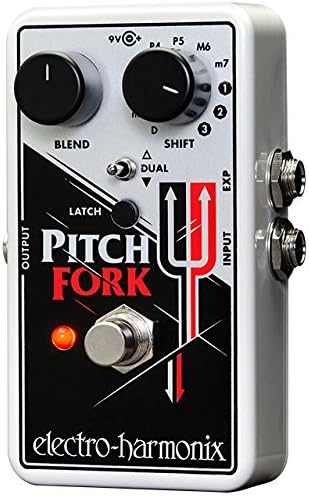 The effectiveness of this pedal is that it brings something new to the sound of your guitar. You can make your six-string sound like it has eighteen strings. Or you can make a single note cascade and soar as you have never heard it before. Therefore, it could possibly replace even the best chorus pedal you have on your board. Possibly.

Choose the pitch you want, or if you prefer, you can employ an expression pedal. This will let you control sweeps and leaps through the octaves.

Not just another pitch shifter…

The Pitch Fork will take you over a three-octave range, either up or down furthermore, if you want to get really adventurous, up and down at the same time. The amount of the shift you set can be a fixed interval, or you can vary it with an expression pedal.

The number of sounds and options available are limited by just one thing – your imagination. This is one of the most versatile pitch shifter pedals out there today. While it is comparable to the Digitech Drop pitch shifter in some ways, it offers so much more.

So, let’s look closer at what makes this pedal tick… 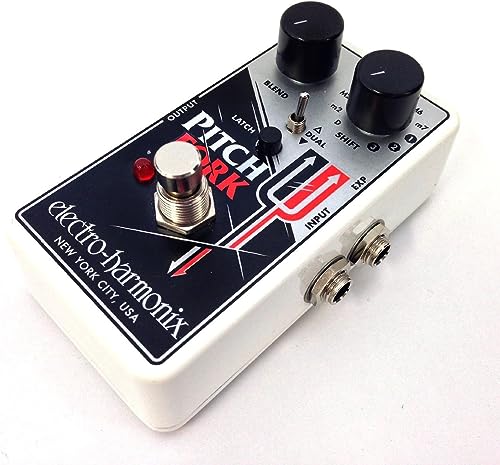 A simple enough construction measuring 4.53 by 2.76 by 2.13 inches. It isn’t the strongest pedal we have ever seen, but it will likely do the job. On the other hand, it is one of the best compact pitch shifter pedals you are likely to find. Two control knobs, the footswitch, and a toggle switch are all you have to worry about.

There are sockets for input and output. Also, an extra socket for an expression pedal if you want to use one. However, it is not included and is an optional extra. It has four small feet underneath that will keep it quite stable. And it is powered by the power supply that is included or by a 9-volt battery. 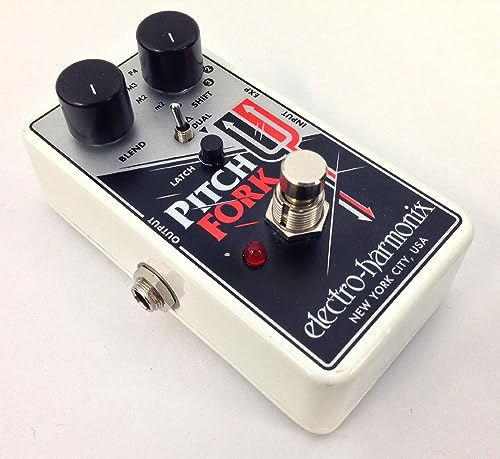 As with most pedals with just two control knobs, they are easy to understand and manipulate. However, as we shall see, it is also usually the case that it will take some time to get the best from them. There are also a couple of switches.

There are eleven different choices to use in setting up the pitch you are seeking. These range from anything from a Minor 2nd to a Minor 7th, and loads more in between, including major transpositions. Also, it allows you to choose between one, two, or three octaves. The shift also controls the chromatic transposition intervals.

As you will gather from the name, the Blend control mixes the treated signal with the untreated, dry analog signal. Rotating the control knob will take you from a dry to a totally wet signal.

This is a three-position switch that allows you to choose whether to transpose up, down or even both. It operates relative to the root note. Additionally, the Dual mode will output two signals. One of the signals will create a harmony to the base note set according to the Shift Control.

When the button is up, Momentary mode is selected. This effect will only operate when the footswitch is held in the down position. When using this option, the Expression pedal, if connected, will vary the glissando rate.

A musical term indicating the slide from one pitch to another. Sometimes written as ‘gliss’ on sheet music with a wavy line. The glissando rate operates from four milliseconds to two seconds. The default setting is 60 ms. The basic controls then are easy, but the practical use of them will take a little work to get the best out of them.

Couple of things to note…

We should make two observations here, firstly that you cannot designate a key using the pedal. That may be a problem in some circumstances and could limit its effectiveness.

Secondly, and possibly, more importantly, many of the functions just discussed do rely on an expression pedal. This is not supplied, and they are assuming you will have one or be willing to buy one. 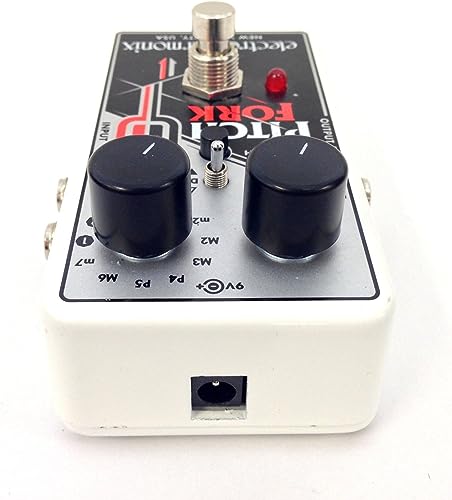 The object of this pedal, like many others, is to create a sound, which it will certainly do. It can make your guitar sound like it is 12 or even more strings. In addition to creating harmonies, this pedal will give you the option of a dual, one-note up another down, sound.

Likewise, it will also work well with other effects pedals that are placed before it in the chain. It has a unique sound that will appeal to some. But it does need to be used in the right environments.

When should you use this pedal?

It is not like a delay or reverb that you might use all the time. It is a pedal that offers a unique sound. In that respect, it might be best used sparingly.

So having identified that it is a pedal that won’t be on all the time, we think the price point is a little high. It might be considered a luxury pedal rather than a necessity.

Get the sound you want with the right effects pedal. Start by checking out our in-depth reviews of the Best Uni Vibe Pedal, the Best Looper Pedals for Electric Guitar, the Best Analog Delay Pedals, the Best Wah Pedals, and the Best Boost Pedal you can buy in 2023.

As we have said, it is our opinion that this falls into the category of luxury effects pedals. It certainly isn’t going to be in the first two or three pedals you buy.

It has some really nice sounds, is well-made, and does offer something different. But it comes at a price. It certainly isn’t the cheapest pedal you will find, but it is one of the best pitch shifter pedals around because of its small size and versatility. 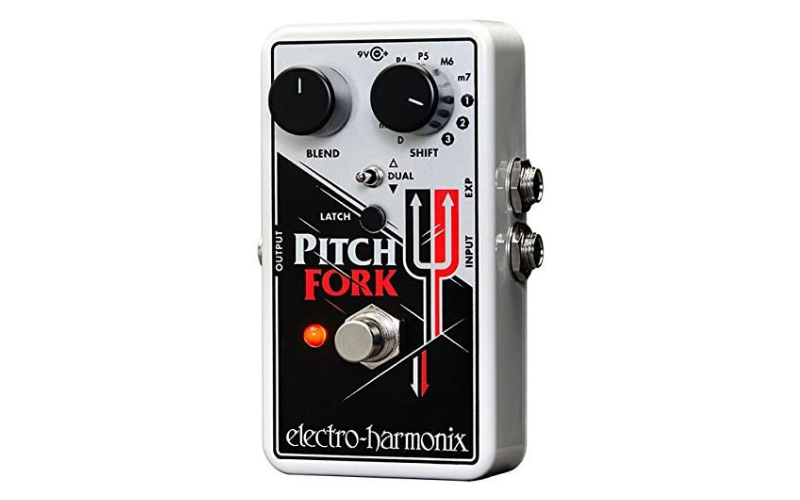 For those that want a Pitch Shifter from a respected company, this pedal will deliver a variety of sound possibilities. But remember, you will need an expression pedal to get the best from it.

So, until next time, keep on rocking.