So, exactly how many effects pedals for guitars are there? How long is a piece of string? In reality, there is a pedal for just about everything you can think of. But unfortunately, we haven’t found one that can make the tea yet.

In the ‘analog age,’ it was all quite simple and basic. And many would argue the sound was better than anything digital pedals can produce. This is presumably why pedal manufacturers have forlornly tried to recapture those sounds.

But with the invention of the transistor, it all changed. The very first transistorized pedal was the Maestro Fuzz. You may remember it on ‘Satisfaction’ by the Rolling Stones in 1965. In the same year, we also had ‘Keep on Running’ by the Spencer Davis Group.

The move to digital…

Digital pedals made anything possible, except for a pure analog sound. But in the eyes of many, that didn’t matter. Now best effects pedals were small and portable. Along with increased reliability, new sounds just kept coming.

Today, as we said, there is a pedal for everything. Some good, some bad, some just plain ridiculous. Some are easy to use; others require an engineering degree. We even have pedals that offer more than one sound, and pedals that can turn your sound inside out… literally.

This pedal has an interesting name, but it is a simple concept and a very useful one in many ways. But before we get into our in-depth Electro-Harmonix Freeze Review, let’s have a look at the manufacturers. So, who are Electro-Harmonix?

We are sure he won’t mind us saying this, but the founder of Electro-Harmonix, Mike Matthews, looks like he should be in a “Back to the Future” movie. And while movies may be losing their appeal, guitar effects have mot. He and the company are still good, very good.

Founded in New York in 1968, they progressed very quickly and then went quiet during the 1980s. People began to clamor for their pedals, and the prices on the used market started to skyrocket, then EHX came roaring back again. Of course, Mike and the boys had a little help.

Kurt Cobain used the companies Small Clone and Polychorus pedals to great effect. Dave Gilmour was a big fan of the Big Muff and greatly appreciated the Electro-Harmonix sound. If you’re going to have big-name endorsements, they don’t come much bigger than those guys.

The range of pedals has expanded these days, but they are still producing close variants of their original pedals. As a company, they are never shy of trying to be creative and doing something different and outrageous. That is such a positive and refreshing attitude. We just hope that someone doesn’t sell them a DeLorean! You never know what they might do with it?

Now that you know a little more, let’s take a look in the fridge and see what the Electro-Harmonix Freeze is all about. But we warn you now; it doesn’t make tea. 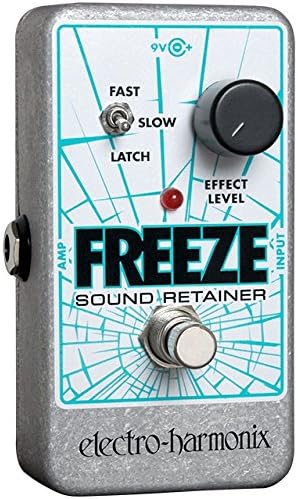 Originally released in 2010, someone in the bowels of the EHX design office had an idea. Let’s make a pedal that will hold or even ‘freeze’ your notes and chords. “It’s been done,” someone said. “But not like this,” was the answer.

Let them freeze it for as long as they like. Let them hit a chord or note, come back the next night, and it’s still going. Play it, press the footswitch, and keep that sound indefinitely. And that is exactly what this does. Doc Brown would be impressed. We certainly are.

Decay if you want it…

If you want the sound to decay, you have two settings of slow or fast. Or there is a function that will just keep the sound there. Now that is what we call “sustain”.

Once you have captured your sound and left it on sustain, you can play over it. A full accompaniment in a single pedal. You can even dial in exactly how much of the effect you want. This gives it a wide range of options for its use.

Furthermore, you can use it with all your favorite pedals. Allowing you to create a collage of sound of incredible sonic proportions. With seamless transitions, it creates more than sounds. It creates amazing atmospheres, and that alone earns it a place among the best EHX pedals you can buy. 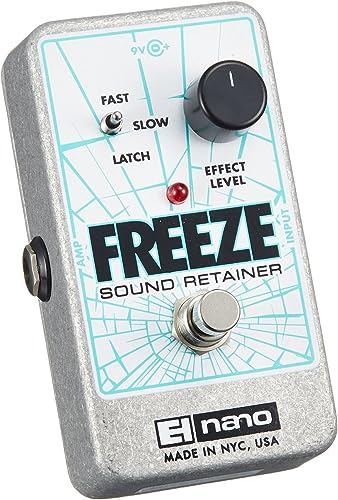 As you might expect, the ‘Freeze’ has an interesting design on its chassis. Shattered ice is probably the best way of describing it. Plenty of the design is visible because there aren’t that many controls to worry about. We shall deal with those a bit later.

It measures a fairly standard 5.65 by 1.4 by 3.2 inches and weighs 0.8 ounces. It has a solid all-metal design with a robust footswitch. It is ready to go to work.

It includes a 9.6-volt power supply. However, you should be aware that this pedal is for power supply use only. It does not take batteries.

It also has a buffered bypass. This is not the most common design element you will find. The buffer is really just a small preamp built within the pedal circuits. The idea is that this small preamp will take your signal that is passing through it and enhance it. For this pedal, its objective is to preserve the tone of your instrument. And it does just that.

Nothing to get too excited about build-wise. Other than that, it is well-built and strong enough to cope with what you throw at it. But then most Electro-Harmonix pedals are built like that. No wonder they are consistently rated as some of the best guitar pedals out there.

As we have just said, the controls are quite minimal. Given what this pedal is capable of, that seems a bit surprising with only three controls and two ¼ inch jack sockets. The jack sockets, of course, are just in and out.

A standard rotating knob determines the amount of the effect that you want to apply to the sound. It also acts as a volume control for the sustained sound. The output uses the ‘dry’ signal at its original base volume.

As we mentioned earlier, when used with the Latch setting, this will deliver permanent sustain of any note or chord if you want it. Leaving the footswitch active means that you can play over the top of the sample you have created.

This, of course, opens up a wealth of potential options. In many ways, it will be like having an extra guitar player in the band. In this mode, there is only one limitation that we can see. Your imagination.

After what we have described so far, you won’t be surprised to know that the performance of this pedal is outstanding. There are many pedals on the market, but few offer you something so different.

We have already mentioned them, but they should be considered again. If only because they give you the basics of what the pedal is all about. Perfect looping from a real-time performance capture allows you to do one of three things.

You can leave it with slow decay offering you a unique exit. Or, if you prefer, you can cause it to decay quickly, which allows you to set up another. Additionally, you can engage the Latch control, and the sound will just stay there. As we have already mentioned, the opportunities that derive from that option are endless.

If you’d like to try and create a ‘wall of sound,’ then this will be the pedal for you. Using the Latch key and playing chords over the top of other chords creates that ‘wall’. Full and rich, it will almost sound like an organ.

But there are other options. For instance, you can combine it with your best chorus pedal or your best delay pedal and start to play around. You can make it a bit weird and rather eerie or even create some spacey sounds. As we said, it is down to you and your imagination. With this pedal, anything goes.

First, if you are using this pedal on a pedalboard, it should be placed at the end of the chain.

Second, it is very good for guitars and keyboards. And it will even work to a certain extent with bass guitar. But, it will not produce any decent results with an acoustic guitar.

And third, it is not the cheapest effects pedal out there. We do not think it’s overpriced at all, but there might be some who would disagree.

Whatever kind of sound-shaping you’re looking to add to your guitar, there’s probably a pedal for it. So, why not take a look at our in-depth reviews of the Best Fuzz Pedals, the Best Reverb Pedal, the Best Boost Pedals, the Best Analog Delay Pedals, and the Best Mini Guitar Pedals you can buy in 2022.

As we said in our opening, Electro-Harmonix is nothing if not creative. And this pedal represents that creativity. Other pedals will do a similar job, but we doubt they reach the performance levels of this pedal. 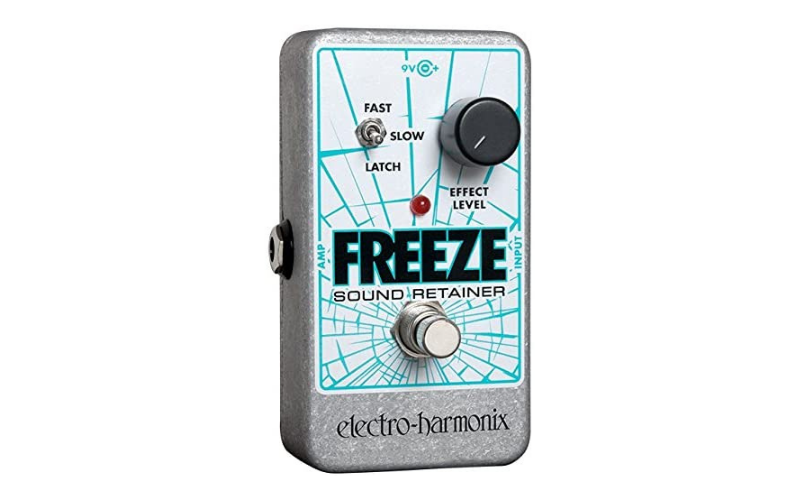 You might think that this pedal is a bit too ‘space-age’ for you. But you will be surprised. It is not all about weird sounds and noises. It is about creating sound, even in its most basic form, and enhancing your performance. And while it might be at the top end price-wise, for what it can produce, we don’t think it is expensive.

Another memorable pedal from Electro-Harmonix. Definitely one for the wish list. Just don’t leave the engine on the DeLorean running. Otherwise, Mike is likely to rewrite the history of Rock&Roll.

Until next time, never stop searching for your sound. 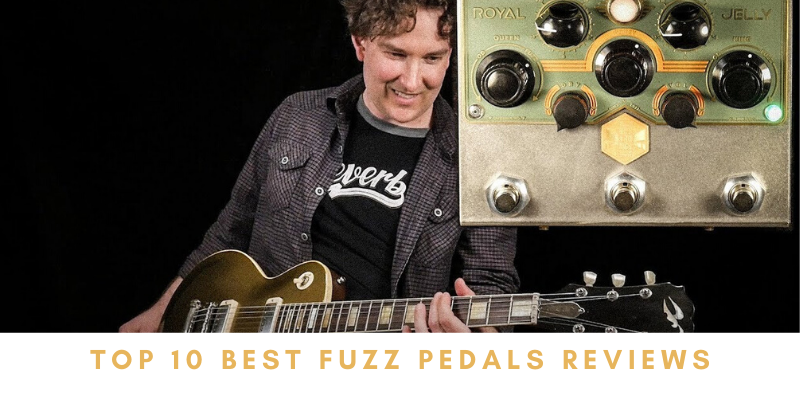 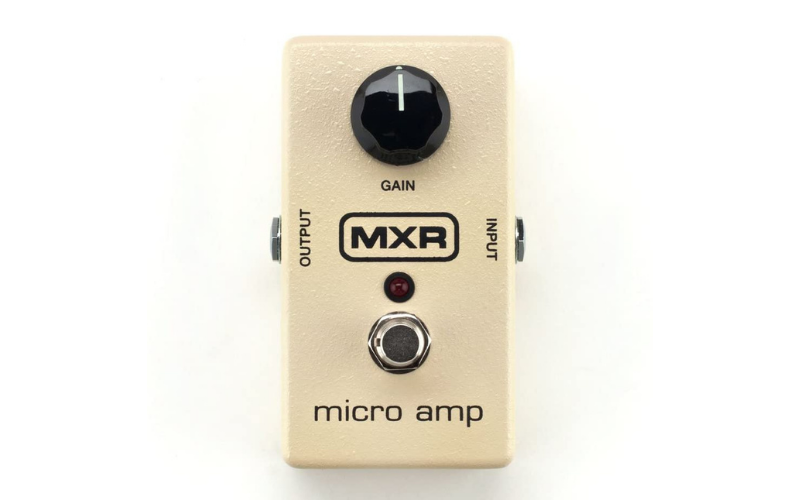 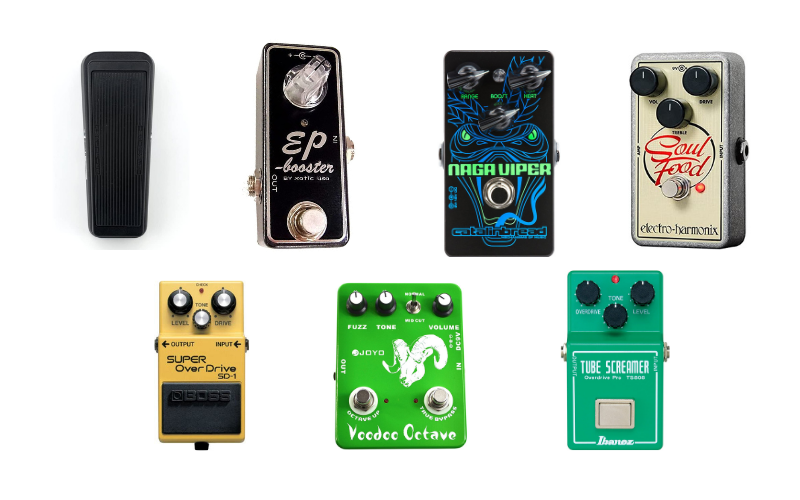