Today the music world is packed with effects pedals that do just about everything. The subject of our Electro Harmonix Canyon Review is just one of literally thousands of options currently available. But pedals like the EHX Canyon delay looper didn’t appear overnight.

The very first dedicated pedal is credited as being one from DeArmond in the late 1940s. It was a clumsy cumbersome effect that most musicians at the time couldn’t get to grips with.

They were confused by the word ‘tremolo.’ Musicians at the time created the effect with a style called ‘tremolo-picking.’ They did this by repeating a note very quickly. Whereas the tremolo from DeArmond modulated the sound by changing the volume.

Was DeArmond the first?

Some would argue, no. The very first effects were built into the instruments themselves. Rickenbacker had some success with a mechanical tremolo sound built-in to one of their guitars. However, it can’t be denied that DeArmond opened the door to ‘pedals’ as we now know them.

Effects built into amps. We had a Selmer Zodiac in the 60s with a tremolo built-in. Many of the big manufacturers included them in the amps from that period. The most famous probably being the Vox AC30.

The door was opened…

But then transistors arrived. The door that had been slightly ajar was now thrust wide open. In 1962, the Maestro Fuzz-Tone pedal announced its arrival. It took a bit of getting used to, and for some doubters, to even accept. But then the world became aware when Keith Richards used it on ‘Satisfaction.’

We don’t need to go on. Suddenly you could do anything, and musicians created their sound and image based on what sounds they could achieve. Today as we said, the options are many and often confusing.

So, we put together this in-depth Electro Harmonix Canyon Review to help you decide if it is the best delay pedal for you.

Most musicians will be familiar with the brand name. They produce a range of what some would describe as ‘high-end’ pedals. Certainly, the variety and quality are all there. They also sell vacuum tubes that have been rebranded.

They were founded in 1968 in New York. But it was during the 70s, and then again in the 90s, they produced some great pedals. Some would agree it was when they made their name. The Soul Food is a well-respected pedal, but it was the Big Muff and the Memory Man where they really hit the jackpot.

Used at times by Jimi Hendrix and Carlos Santana, it was Dave Gilmour who brought it worldwide attention. One of the great uses of the Big Muff, according to Steve Winwood, was on ‘Keep on Running’ by the Spencer Davis Group. But that’s a problem since the Big Muff didn’t come out until 1969. ‘Keep on Running’ was 1966.

Maybe they used its predecessor, the Muff Fuzz, but it was more than likely a Maestro as used by Keith Richards.

Anyhow, if you want to hear it listen to the guitar solo on Comfortably Numb. Best guitar solo ever? In our book, nothing even comes close. That is a Big Muff in the hands of someone that can play. 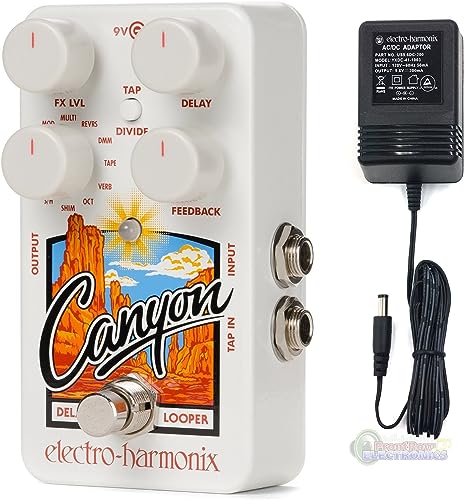 This is not what you would call a new release from Electro Harmonix. The original was first released in 2017. The name ‘Canyon’ doesn’t give much away. In fact, this pedal has much more inside than its size would suggest. So what is inside?

There are time-based effects that cover a range of sounds. One of which is a clone of the Deluxe Memory Man. It has reverb and a looper with a 62-second capability, and the built-in tap temp will control them all.

Four control knobs give you ample space to tweak the sounds exactly how you want them. And this pedal will work well with a bass guitar as well. Furthermore, you can even use it with an acoustic guitar.

If you are lacking a few sounds on your pedalboard but don’t have a lot of room, this could be for you. As a compact effects pedal with such a small footprint and a wealth of sounds, it is certainly worth considering. Let’s have a closer look. 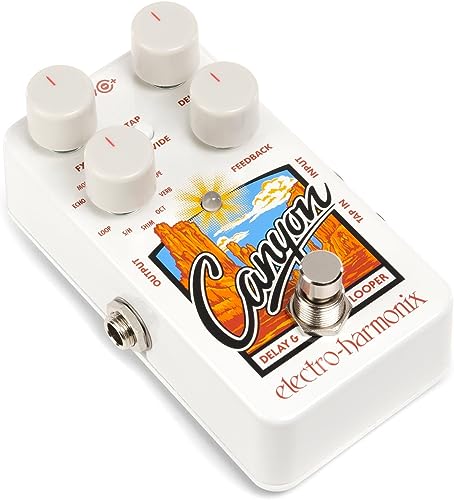 We mentioned the small footprint of this pedal. The measurements are just 4.5 by 2.75 by 2.1 inches. That is not going to take up too much room. Furthermore, you don’t often find white-colored pedals with scenic graphics on them, but this one is, and it is quite an attractive design as well.

However, we are not sure how long it will remain white and pristine once you start to stomp on it.

It is an all-metal casing that is strong and sturdy, with four small circular feet underneath. It will run off a 9-volt battery or through the mains adapter. The adapter is supplied, which is a nice touch, and it has a buffered bypass built-in.

Where is it made?

This question gets asked often. Some sites say it is made in the US, but that is not entirely accurate. It is assembled there. But many of the parts, including the metal housing, are made in China. And the EHX tubes are made by Reflektor in Russia.

But really, there’s only one question you need to ask. Does it work? And the answer is yes. End of subject. Nice design, robust build, and a small footprint. Full marks so far for the Canyon delay pedal. 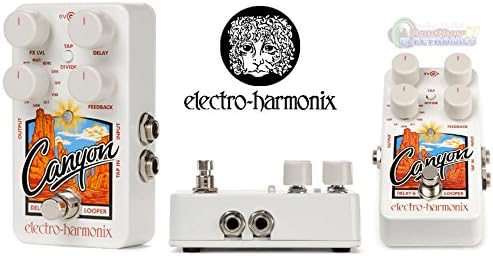 The Canyon from Electro Harmonix was designed to fulfill a role. That being to provide professional-level sounds and effects previously only found in more expensive pedals. To that end, it features eleven modes of operation in three areas. Let’s take a look at them individually.

It might be a physically small pedal, but it has some impressive features. The Analog Delay is at the center of it all. Some have even called it the best analog delay pedal, but we’ll leave that distinction up to you.

There are eight voicings that include a variety of delay options. These include a tape-like delay and a Shimmer, a modulated delay, a Deluxe Memory Man, and a Digital delay. You can set the rhythm of the delay by tapping out the tempo using the Tap and Divide control.

You can control the sound even further by holding down the control knob. This will alter the operation of the controls and allows you to utilize ‘deep editing’ options. These include applying ‘tape age’ and the modulation of the repeated signal, amongst others. Each delay effect has a timing of a maximum of three seconds.

Someone once said to get the best out of a delay pedal; you just have to have some reverb on it as well. We wouldn’t disagree with that. And again, some claim that this pedal can hold the title of best reverb pedal. We aren’t ready to make that claim yet, but the reverb is a special feature of this pedal.

Sometimes when you hear different effects in the same pedal, they don’t compare with the effect from a specialized unit. What we mean by that is a standalone Reverb is usually of better quality than a multi-effect Reverb.

That being said, the reverb in the Canyon will make you think twice. It certainly did for us. The reverb is so good on this pedal that if it was a standalone reverb unit, you’d probably buy it.

To clear up a little misconception, a Looper is not a delay pedal with extra time. Yes, it does repeat, but its purpose, functions, and operations are totally different. The EHX Canyon looper function is a tool that will help create instant loops for use in a performance or practice.

You record what you want into the pedal. The pedal will then playback what you recorded until you tell it to stop. Once you have got the loop, you have total control over what you do with it.

If we are, to be honest, the looper on the Canyon is a basic design. It probably doesn’t reach the standards of the delays and reverbs we talked about. Having said that, it performs just as well as a budget looper delay pedal.

Electro Harmonix has made this easy to use. It’s just a case of setting up the Loop function and using the footswitch. You can start, stop, and even overdub what you do. Additionally, each loop can be up to 62 seconds long, so you can get a good riff or bass line going to play along with.

The pedal’s internal memory will store what you do and will save your loops even when the pedal is off. And, of course, you can free up memory space by deleting loops manually. But, as we said, it is a very basic looper, so there are no options for editing or modifying your original loops.

Where are the Bass boys?

Don’t think that this looping effect is just for those silly guitar players either. If you play the bass, try it. Lay down your looped track, keeping it simple. Play your performance track over the top. Harmony lines, harmonics, octaves, alternating structures, and suddenly the band has two bass players.

Judging by the performance of this pedal Electro Harmonix has done a decent job. They have made a concerted attempt to pack in as many sound options as they can. We think they have succeeded in many respects.

You can argue that the sounds are not as good as rack-mounted effects. Would you expect them to be? But the sound options with the delays and the reverbs offer something special, while the looper just adds an extra dimension.

There are four control knobs that are well-labeled and relatively easy to use. That is, once you have been through the early learning curve that all pedals have. The controls are Effect Selector, FX level, Feedback, and Delay. The Effects Selector shows the eleven features for selection. They also control for modulation and other secondary features.

Centrally located on the top of the pedal is the Tap and Divide button. This allows you to select any rhythmic subdivisions in tempo. There are two ¼ inch sockets on the right side of the pedal. One is for the tap in, the other an input. On the left, there is a ¼ inch out.

It is not uncommon for some manufacturers to make a pedal with a mains option and then not include an adapter. Fortunately, that is not the case with the Canyon. The power supply is provided in the box. How thoughtful of EHX.

This is a pedal that gives you a lot of sound options. But it also gives you as many performance options. It is well-made with a strong casing and ready to go straight on your pedalboard. The Delay and Reverb are great together and offer some great sounds. Plus, there is the fun and versatility of the looper function. 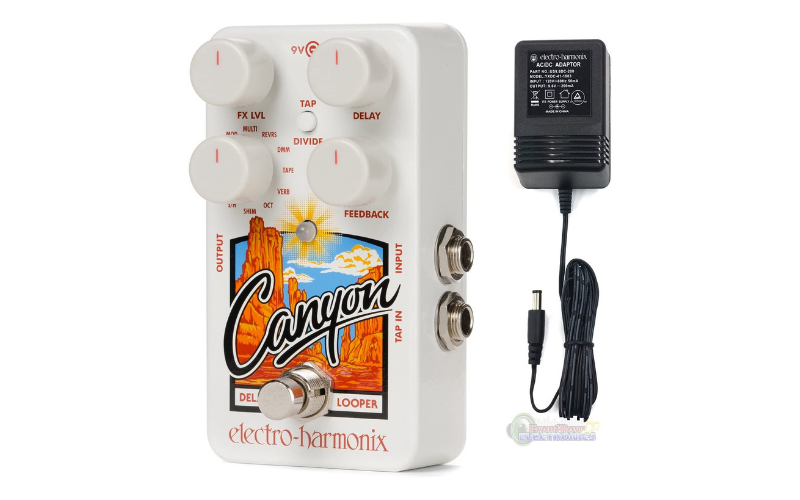 All in all, we think it is a very good pedal. If you are looking for something to give you a different sound, the Electro Harmonix Canyon could well be the one.

Until next, may the music make you move. 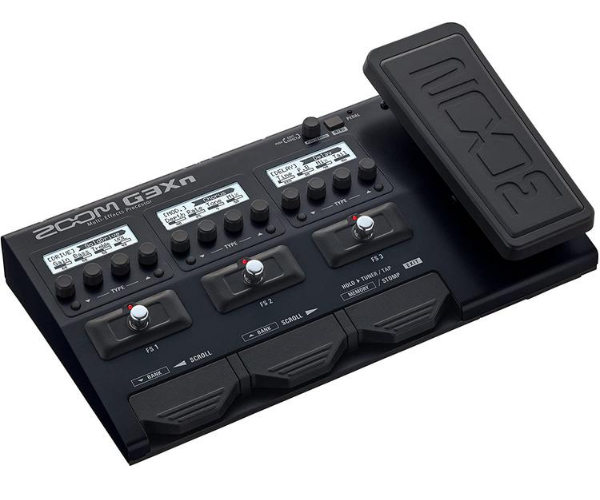 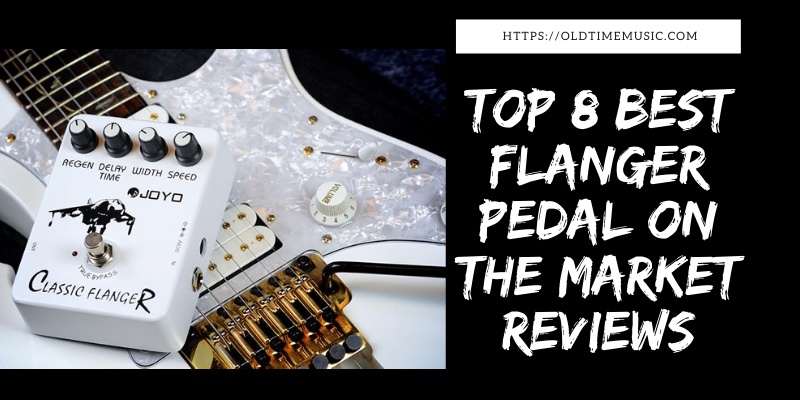 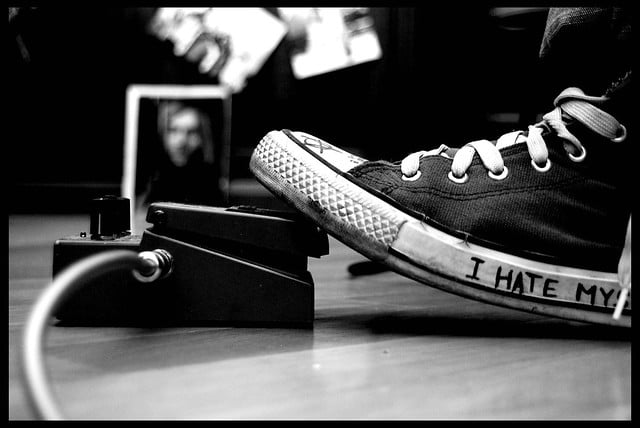