Once you have got your amp and guitar, what’s next? Thoughts usually turn to effects pedals. But what to choose? Pedals like the Dunlop MXR Dyna Comp M102 are not usually high on the list. However, they would be for an experienced guitarist.

Having the right guitar and the right amp is very important. It will create ‘your’ sound, as far as your budget will allow anyway. But having the right effects pedals can transform that sound.

Some pedals produce very noticeable results by what they do to your signal. A heavy distortion, a delay, a wah, or even space-like reverb. They all have a marked effect on the sound. They are the obvious first choices.

But one of the most common pedals amongst experienced guitarists is the compressor. What you could call the pedalboard’s unsung hero. Always there, always just quietly getting on with its job, truly one of the most essential guitar pedals.

It is not meant to make you sound outlandish, wild, or dreamy. Rather it is there to make what you play sound good. Furthermore, it controls the dynamics of your guitar and has the same effect on everything you use. Not taking away power as some think, but adding to it.

To the listener, they might not even know it was there. They will hear the distortion or the delay. However, they will probably not realize the compressor is doing its thing. The results of what it does are far less obvious than other pedals.

The effect might not be as sudden or as exciting, but it is in many ways more important, as we shall find out in our in-depth Dunlop MXR Dyna Comp M102 Review. But before we do, let’s remind ourselves of who MXR are…

If the first pedal you manufacture is used by one of the rising stars of the guitar world, you know you’ve done something right. That is what happened to a couple of school chums when Dutch Eddie included it on the first two Van Halen albums; most people were surprised.

The Phase 90 was the launchpad for the two of them, working out of a basement apartment in New York. Eddie used the Phase 90 on his debut album in 1978. By then, the second of the MXR offerings had arrived, and the Dyna Comp became one of the best guitar compressors you could buy. It was basic and simple to use, but it had something special.

Dunlop took the rights to the MXR name in 1987, and those early MXR pedals are still produced in various shapes and sizes. The Dyna Comp compressor pedal set a standard for others to follow. So, let’s have a look at it… 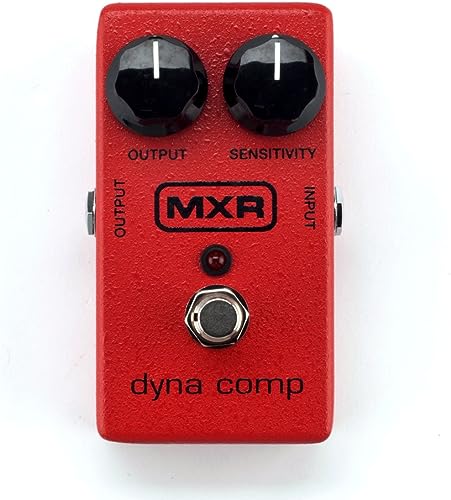 As we have already commented, basic and simple but with a very special result. That is the Dyna Comp. It is a well-designed effect that levels out the dynamics of your guitar. Getting rid of excessive highs and lows and giving you an extra body to the texture of the sound. But it also adds a little extra sustain to the solos.

There are a lot of well-known guitar players that have benefited from that extra sustain and clean, click-like tone that it can produce. So, let’s take a closer look at one of the best MXR pedals and see what the Dyna Comp M102 is all about. 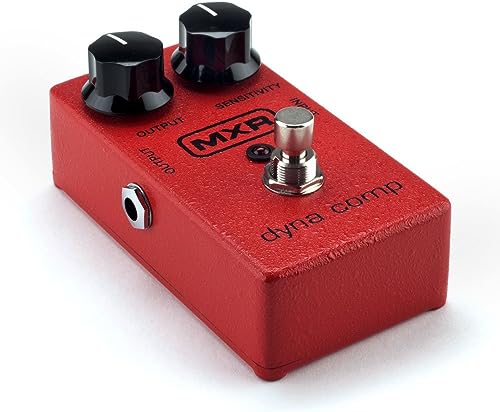 Pedals need to have a build quality that is robust and sturdy to withstand the use they are put through. MXR did have a period in the 80s where they introduced a range of plastic pedals. They did this to try and compete with Japanese products that were beginning to flood the market. It didn’t work.

MXR have now reverted to making their pedal with a rugged all-metal design. A much better option. This pedal is all-metal and is reasonably well-built. It measures a standard 5.8 by 4.5 by 2.8 inches and weighs 1.15 pounds. You have a choice of using 9-volt batteries to power it or use a mains supply. However, the mains supply is an optional extra and not included.

Adjust it with your feet…

MXR designed this pedal in a way that allows you to control it with your feet. They did this by adding rubber covers that fit over the control knobs.

Not a perfect solution to making adjustments in a live situation. But it certainly beats having to stop playing and get on your knees. Many pedals have controls that are impossible to read standing up. This goes some way to alleviating that problem. 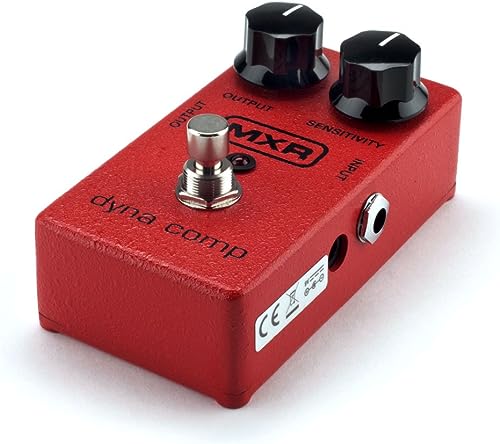 To keep the operation of the pedal simple, there are just two controls; Sensitivity and Output. A major benefit of these basic controls is that you can learn how to use this pedal in no time. Simple is good.

There are just two ¼ inch jack sockets, one for the input and the other for the output. Many people prefer it if you don’t have to hire a NASA scientist to show you how to operate your new pedal. Like we said, simple is good.

As you might guess, this controls the amount of compression applied and the ratio. This has a reasonable range, and if you choose, it can really squash your signal.

This simply just controls the volume of the pedal. We have already mentioned the rubber covers over the controls that allow an element of control with your foot.

Many people see the lack of more control over the sound as a deficiency in the design. As an example, there is no setting for the amount of attack. But some see its simplicity as one of its major assets. It seems to be an MXR thing. The Phase 90, for example, had just one control knob, and it is considered one of the best effects pedals ever made.

We have discussed the limited control options on this pedal and why it’s great for first-time compressor users or those who just want to keep it simple. At the end of the day, if you can easily achieve the level of performance you want, isn’t that better?

So what does it do?

It has one main task that affects everything else you are doing. That task is to level out the dynamics of your sound. Take away excessive highs or lows and make your sound stable. In achieving that, other things come into play.

Because you are controlling the peaks of volume at the top end, it allows you to increase the volume overall. This pedal performs that task perfectly, and that allows for a little bit of extra sustain.

Working with other pedals…

You can also have some effect on the overall sound by setting the compressions at a higher level. That will generate a sound this pedal is well-known for. A very highly-processed sound with a clunk and a click.

This can work well with pedals that thrive on short sharp notes. Delays are a good example. There are some interesting sounds you can achieve by putting this compressor with your favorite delay pedal.

One last very positive comment about the performance is the low level of noise this pedal generates. Even at high compression values, it is insignificant. This allows you to experiment with some short sharp single-note picking sounds.

If you are looking for the perfect pedal, we have you covered. So, check out our in-depth reviews of the Best Analog Delay Pedals, the Best Uni Vibe Pedal, the Best Fuzz Pedals, the Best Wah Pedals, and the Best Reverb Pedal you can buy right now.

The MXR Dyna Comp is a simple to use but effective compressor. Its huge asset is that it can produce a natural, warm compression. But its main task of leveling out your sound and keeping it stable is done so expertly. 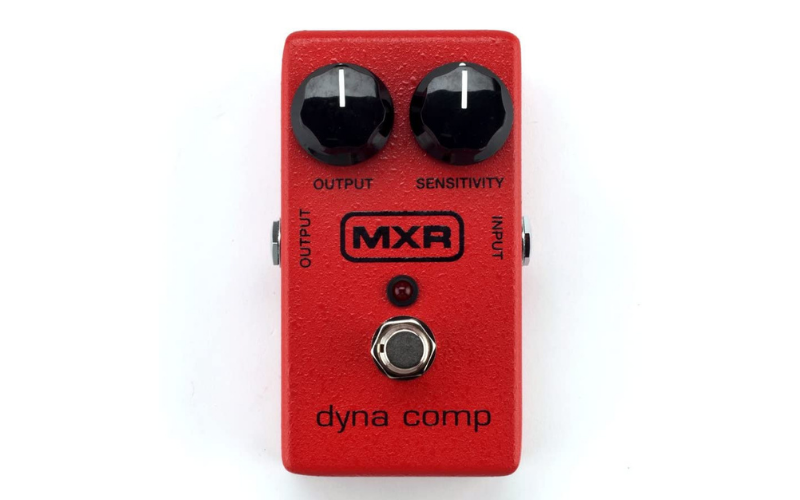 As is often the case where companies are the subject of takeovers, the quality of the products can suffer. You only need to look at Fender and CBS to recognize that. A little of that seems to have occurred here. If you are expecting the pedal that MXR first produced, you aren’t going to get it. The Dunlop version doesn’t have the same quality. And the construction standards also appear to be somewhat lacking.

That being said, what you have is a very cost-effective compressor that punches above its weight. That makes it worthy of consideration. Therefore, if you want one of the best budget compressor pedals you can buy, this one should top your list.

Until next time, may the music make you groove. 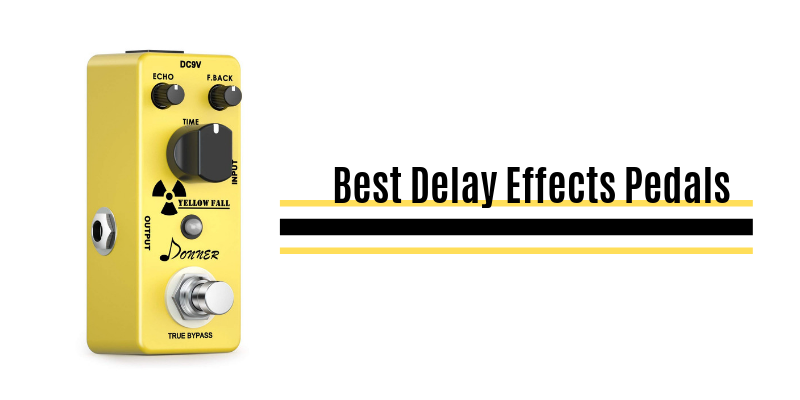 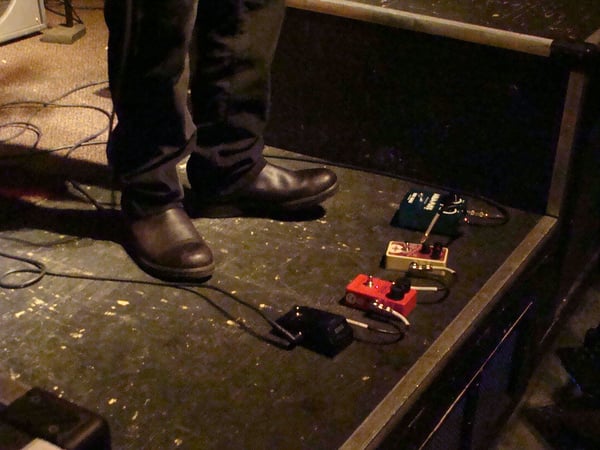 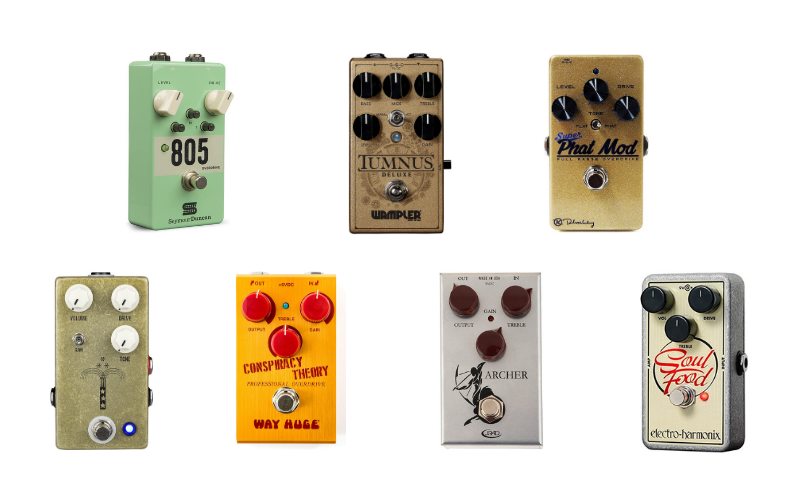