What are the best electric guitar effects? There is a case for saying that one of the earliest is the best. The tape unit arrived on our doorstep in the late 50s. Sixty years later and technology has evolved beyond recognition.

And we have a copy of the original to explore in this in-depth Dunlop EP103 Echoplex Delay Review.

The designer of the Watkins Copicat Echo claimed that he brought it to the market in 1958. Although it is hard to find any reference to it before 1960. Even so, it was probably the first.

Mike Battle and Don Dixon developed their echoplex tape delay in 1959, and it began to be sold in 1961. Most guitar players think it was the better piece of kit.

The beginning of the end and back again…

With the arrival of the transistor and the development of digital pedals, tape units began to fall out of favor. But it wasn’t only the transistor’s fault, even though they were cheaper and more efficient. Those old tape echo units were a nightmare at times. Large and unwieldy, they needed lots of maintenance, and tape was becoming more difficult to find. It was the beginning of the end.

But, and it was a big but, what about the sound. Digital delays, no matter how good, couldn’t make it sound like the old tape machines did. The quest for an analog-sounding pedal commenced, and the tape echo sound was on its way back again.

Not quite the same…

There are claims, some of them by prominent manufacturers, about creating replicas of analog sound with digital pedals. But we are firm in our claim that a digital pedal does not recreate that analog sound. How could it?

So pedals like the Dunlop EP103 Echoplex Delay just aren’t going to replicate exactly the original Echoplex. But we will concede that sometimes they get pretty close. It features virtually the same controls and effects as the original EP-3 but in a smaller box with a few extra features.

Dunlop produces this pedal, but who are they? Not manufacturers of tennis racquets. Well, this Dunlop isn’t anyway.

Founded in 1965 in California, Dunlop produces a wide range of products for guitar players. Everything from picks, capos, and strings to digital effects. They make the MXR Echoplex Delay and Way Huge pedals. And they lay claim to the ‘original’ Cry Baby wah pedal, which is not entirely accurate.

A company that is well-known with many well-respected products. The EP103 Echoplex Delay is one such product. So what is it all about? 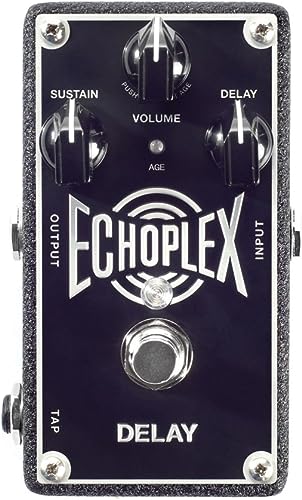 The original EP-3 tape echo developed a huge reputation for its warm modulations and its overall voicing. It was a staple sound of some of the most well-known guitarists that came out of the 70s. But as we said, it was clumsy, sometimes unreliable, and the size of a DVD player. So, Dunlop tried to solve those problems with the EP103 Echoplex.

It’s compact, and the size of most standard pedals and has simple controls. It also has an all-analog dry path. They have built the EP103 to reflect the original in its controls and effects and, as we have said, also added a few new toys to play with, which we shall look at later.

How close to the original is it?

It is an impossible task to exactly replicate those originals. Yes, they were a pain, but… oh, the sound! If you can get a pedal with a small footprint that is reliable and gets close to the original sound, that is a big deal.

So, does the EP103 Echoplex Delay get close? Let’s take a closer look and find out. 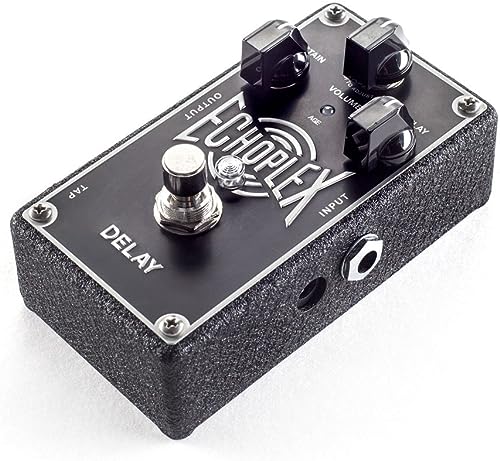 Picture Mike Battle and Don Dixon slaving away with their screwdrivers and piles of tape putting the original EP-3’s together. Could they have imagined a time when all this paraphernalia would fit into such a tiny box, and they wouldn’t even need tape? We doubt it.

This little box measures just 4.5 by 2.5 by 2 inches. A nice and compact effects pedal for any pedalboard. It has an all-metal housing that is built to be sturdy and ready for the road. The all-black finish gives it a rather ominous look.

Everything about this pedal is robust. The control knobs in arrow shapes allow a more accurate setup. The footswitch is tough and able to take a few stomps. Nothing to find fault about with the quality of the build. Plus, it is driven by a 9v power unit, which is included. Well done for that.

We do need to keep referring to the original EP-3. After all, that is the basis on what this pedal is designed on. And what it is supposed to emulate. We need to be able to make some comparisons.

It had what analog tape echos were famous for; a lush sound combining the warmth with the gentle delay. It was three-dimensional and included a natural reverb.

Digital efforts to recreate those tape machine sound often fell flat. However, this little pedal does a good job but can’t quite replicate the original. As we keep saying. How can it?

The addition of the ‘Age’ control attempts to take you back in time. And we have to say that it makes a very noble effort. In many ways, it is the “ace in the hole” that Dunlop relies on to give you that original sound. There is no doubt it gives you options that a less-equipped delay will not give you.

This control offers a variety of delay tones. You do get the flutter and wow in the modulation, which is a plus. But It will take you from very clean to very dark and dirty quite quickly. For a digital pedal, it is certainly one of the best tape delays we have heard.

It is going to be fine for those looking for that vintage delay sound. But for those people that play clean and just want a gentle delay, it isn’t going to suit them at all. The original tape machines would give you that gentle delay if you wanted it. This might not.

It seems today that some manufacturers think everybody plays flat out screaming guitars. Not the case. In our opinion, after listening to the sound it delivers, it might be best suited for a metal guitarist.

The chords you are playing are very lively, and there is a sense of depth that you get from a chorus pedal. Any single notes, though, still keep their punch and bite. It might sound at its best in front of a rather distorted amp. As we say, great for some but not for others.

Delay times range from 40-750 milliseconds, and there is a tap tempo function. However, this can only be used with the appropriate switch, which is extra and sold separately. Fortunately, your basic guitar sound is preserved because of the all-analog dry signal. 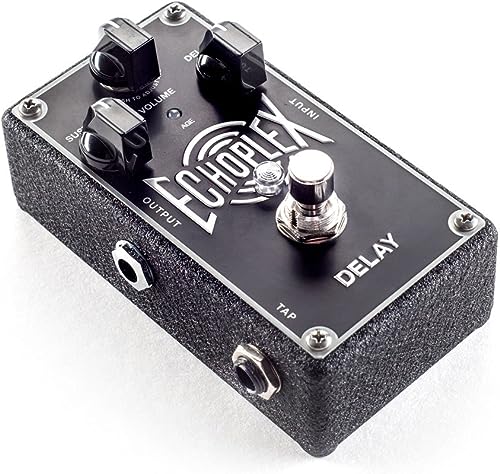 These are placed conveniently on top and, to a certain extent, mirror the controls available on the original EP-3. There are three knobs. The sustain control lets you set the number of repeats. The volume will determine the output level of those repeats. And the delay sets the time delay between repeats.

The volume control is where you access the ‘Age’ control. As we said earlier, this will darken the time and increase modulation.

Once you have established the Age setting you want, you can save it for future use by pressing the volume control. You then get instant access. A good additional feature that lets you call up the sound without trying to remember what settings you used.

There is a ¼ inch input and a ¼ inch output. There is a further ¼ inch if you want to hook up a tap tempo. And just one final thing to comment on. This is not a cheap pedal by any stretch of the imagination. Having said that, it does create quite a unique sound. But if all you want is a basic delay, there are options at a far cheaper price point.

This is not an easy pedal to judge. The reason for this is that much is made about it recreating an iconic sound. Modern pedals, like the guitars and amps of previous eras, never do. They are from a bygone age when things were done differently.

That said, this pedal will go some way to creating the warmth and sound of those first Echoplex tape machines. And this has the advantage of not needing maintenance or cleaning and is far more reliable than the original. 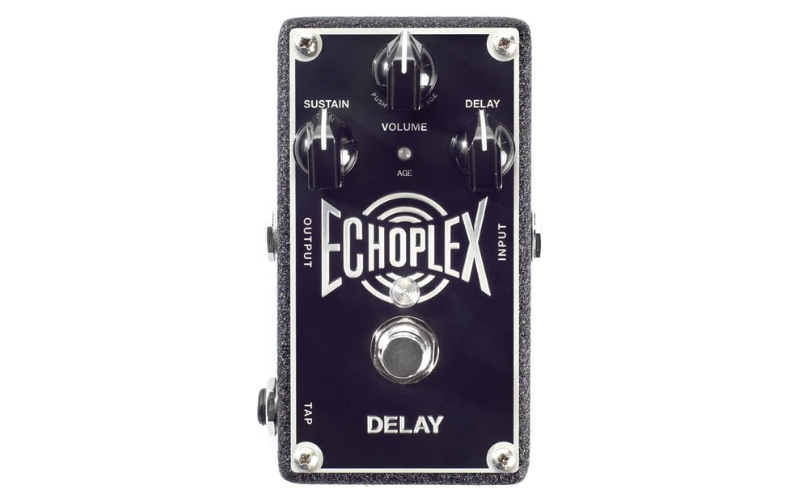 Distinct sound, but not for everyone…

It is a good delay pedal with plenty of features, but it is not an analog tape machine. So, for those that want a gentle, mild delay, this is going too far. In listening to it carefully, the Age control just seems to create what is basically a dirty sound.

It will play clean, of course, but so will a lot of others at a fraction of the price. This pedal gives you a certain sound that will suit some guitarists. For certain genres, it’s a very good sound. The bottom line is if you are a fan of Dunlop and their equipment, it’s sure to be on your list.