I and a bunch of others were quite happy with our Saturdays. Getting coffee and hanging out at Jim Marshall’s shop in Hanwell, West London. We were quite young, finding our feet in music with our instruments and a bit starstruck.

In and out of the shop came Pete Townshend and John Entwistle, Jeff Beck, Jimmy Page, Ronnie Wood, and Ritchie Blackmore, the list is endless. Some weren’t famous then. But locally, they were well-known.

We used to hope Jim had invented another piece of kit for someone to try out. And they would – usually quite loudly. At that time, there was nowhere else in the world to be. The center of the rock music universe was Hanwell in West London. There was no such thing as the subject of this Dunlop 535Q Cry Baby Multi-Wah Guitar Effects Pedal review in those days. 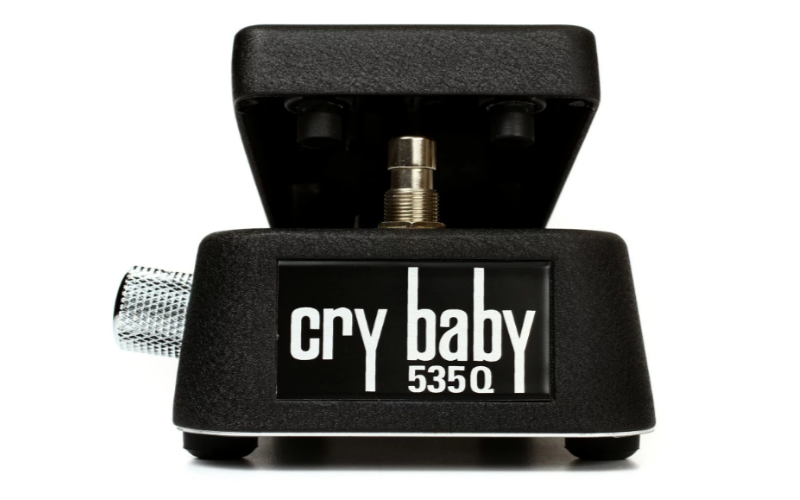 But, we had heard that wah sound before…

Dave Berry had used it in his 1964 song; the ‘Crying Game’ used the sound. Played by Big Jim Sullivan. Just an early prototype, though.

But then this maniac from Seattle turned up quite unannounced. Johnny, who worked in the drum store, went off to play drums with him. He was in and out often enough between gigs and turned up one day, plugged, in, and we all went, “what was that?” We knew about the fuzz box. He used one designed for him by Roger, but there were also others around by this time, basic as they were.

Dunlop took the name ‘Cry Baby’ from Vox and designed a similar effort and called it ….the ‘Cry Baby’. Someone at Vox didn’t register the name, so Dunlop nicked it and made it their own. Bit naughty, really. The Vox wah was still around, though, and Hendrix used it until Roger made one especially for him.

And the rest, as they say, is history…

Music had changed forever. The wah had arrived. In many ways, that signature ‘Jimi sound’ had arrived as well.

Founded in California in 1965, it was a small family run business. Since then, it has grown just a ‘little bit’ bigger, and now their name in effects pedals is well-known everywhere. They have made and been involved in the design of many good effects pedals. But it is for one that they will particularly be remembered — the Cry Baby.

It has become a legendary foot pedal. For a while, it was the pedal that others were judged against. In some ways, it still is. After Dunlop had tweaked the prototypes and early models to get it right, it became THE sound.

There are now multitudes of wah pedals. Some very basic and others with all sorts of extra technology. But the Cry Baby sound has always remained. There are over fifteen varieties of Dunlop wah now. All with slightly different results. Some are not that different from each other, but the name Cry Baby still resonates – especially in the offices of Vox. 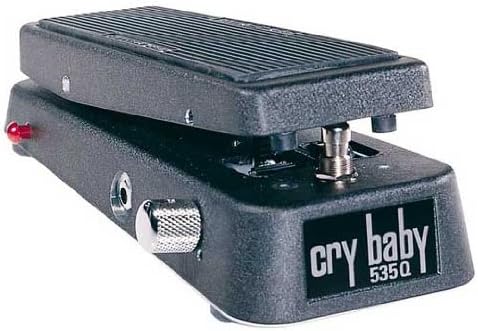 These days, as we said, Dunlop offers at least fifteen different models of the wah pedal. Each of them gives you something a little different. Though with some, the differences are hardly noticeable. Some are signature versions, others just quite plain and simple. We are going to take a look at one.

They have spent a lot of time on the Dunlop 535Q Cry Baby. They have chosen to design a pedal that gives you a range of individual sounds. This is a starting point for you to create your own personalized sound.

The best of the past…

The six different frequency ranges employ some of the great tones and characteristics of past models. It has been over 50 years now since it first was heard. And in that time there are a lot of tones to choose from. The control parameters you can adjust on this pedal are as wide or as narrow as you want.

Unfortunately, there is one thing that could hold the sound back on this pedal – you and your imagination. Something that the guy from Seattle didn’t suffer with at all. And that is rather an understatement. 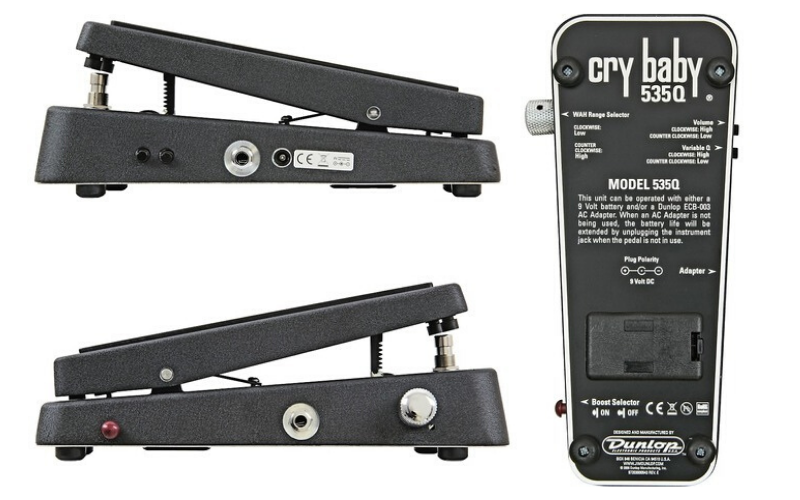 When you are using a wah pedal, it is going to take some heavy usage. It is also likely to take a bit of punishment at times. It needs a strong build, and it has one with its metal casing. The rocker control for the foot pedal is also engineered to last. It will handle most things you are likely to throw at it.

It is no small pedal and measures 4 by 6 by 10 inches and weighs two pounds. It will take up some room on your pedalboard if that is where you intend to house it. It has a hard-wired off and on switch, and its sole operational process is just the rocking back and forward motion.

There are some extra controls…

The Variable Q control, which adjusts sound parameters, is located externally. It does stick out a bit and could be a little vulnerable if it was hit hard. But it has a metal build, and it would take something quite heavy to damage it. The pedal also features True bypass to maintain your tone.

Power is supplied either by a 9-volt battery or a mains adapter. The battery compartment has a cover. You, therefore, don’t have to remove the complete bottom of the pedal to change it as you do with some. The adapter is not supplied and is an extra you will need to buy. The jack sockets are ¼ inch.

It is tough and road-ready, and despite the added tech inside, it still has that Cry Baby look. 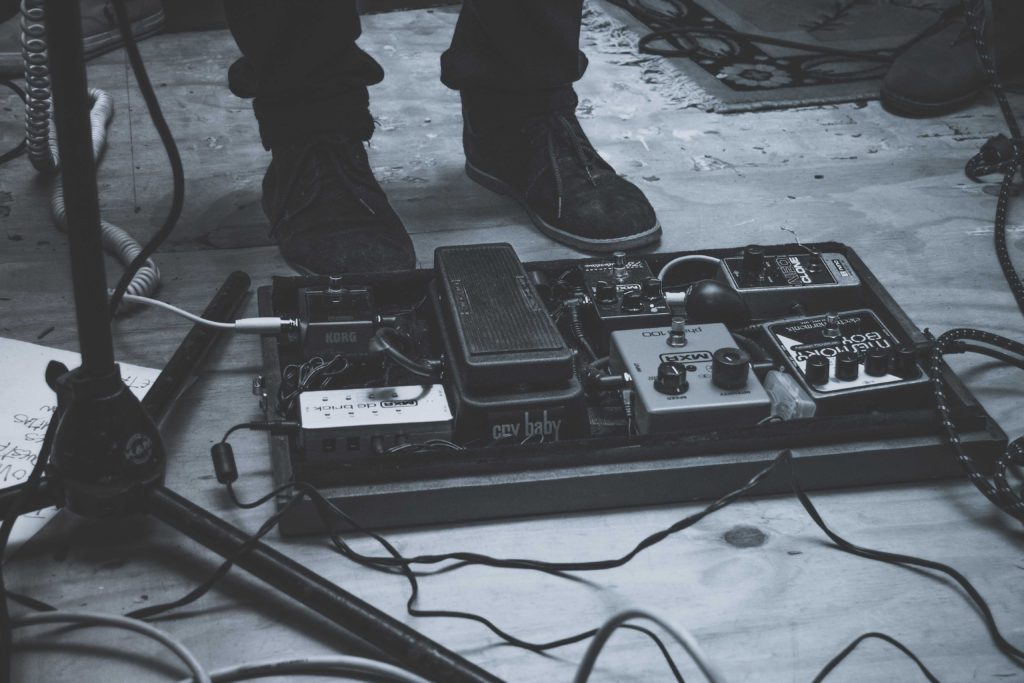 The wah pedals these days, whoever manufactures them, are all quite similar. The nature of what they do and how they do it demands that. It is just a case of adding a few new sound ideas. Of finding ways to ‘tweak’ the sound a little to make it more interesting, making it a little bit different.

The Dunlop 535Q Cry Baby Multi-Wah Guitar Effects Pedal offers you six new sound ranges. You can select any one of six frequency ranges from the Range selector control. Each selection has its roots in past great wah sounds.

There is, what we have already briefly mentioned, what Dunlop calls the Variable Q control. This feature will let you change the sound from a broad sound to a very narrow, sharp response. You select the center of the frequency range and then dial in the extent of the frequency sweep.

The width of the sound as you operate the foot pedal is the sound of the wah. With this pedal, you have complete control.

This pedal also has a +18dB switchable boost. That will make sure that your wah sound rises above the sound of everyone else. Giving it that boost will also create an impressive amount of sustain on the note in some circumstances.

Let us be clear on this point. It does not act as a sustain pedal in any way. The extra dB boost is needed because, at a low Variable Q level, the output volume is reduced. Hence you need the boost. However, in certain circumstances where the boost is not required but is applied, you will get some nice sustain.

Feature-packed, but do you need them?

This wah pedal, as I said, is like most other pedals, it just has more features. Is that good? It can be but only if you need the features. It isn’t the cheapest option out there. If all you need is a simple wah sound, it may have much more than you need.

The unit itself handles very much like previous wah pedals. The action is smooth and not sticky, but a little bit stiff initially. This is because the action is very well-made and will need a bit of use at first to break it in.

More Superb Pedals for your board

What’s the perfect number of pedals? Most think that it’s the exact number you currently own plus one. So it might be time to add another to your best guitar pedalboard as well as a quality Dunlop Cry Baby?

If you’re looking for more Wha options, then take a look at our reviews of the Best Wha Pedals on the market 2022.

There are some potential issues with this wah pedal. It does come with the ‘name’. And of course, you’re paying a premium for that. The Cry Baby name is synonymous with the wah sound, even though it wasn’t the first such wah pedal.

And on the plus side, it has some good sound shaping features. The extent to which you can layer and ‘bend’ the sound of the wah is impressive not found in many other pedals, if at all.

How much Wha do you use?

So the potential issue is, do you need that much variation, or do you just want it. There is a difference. If there is no need for the extra sound shaping and a wah is only occasionally used, then maybe this pedal is not for you. As I said earlier, you will be paying what is quite a hefty price for something you don’t need.

You can, of course, buy a simple wah pedal at a fraction of the price point of the Dunlop. As we said, you are paying for the Cry Baby name.

Have you got room for it?

The other issue refers to many other manufacturers, not only Dunlop. The size of it. Put this on your pedalboard, and suddenly space becomes tight. If you are one of these guitarists that has a pedalboard that resembles a control panel at NASA, then space (pardon the pun), is a problem. You might have to put it in the chain, but keep it off the pedalboard, as many guitarists do.

There are, of course, companies that make their wah pedals really quite small. That is going to suit some people, even though the amount of control is obviously less with smaller wha pedals.

It is a tough unit; we all know that, and it is well-made. It has some nice features, but it isn’t particularly cheap. If you want a wah pedal that has a few sound shaping features, then this will be worth looking at.

Find out all about Art and our other writers on our About Us page. 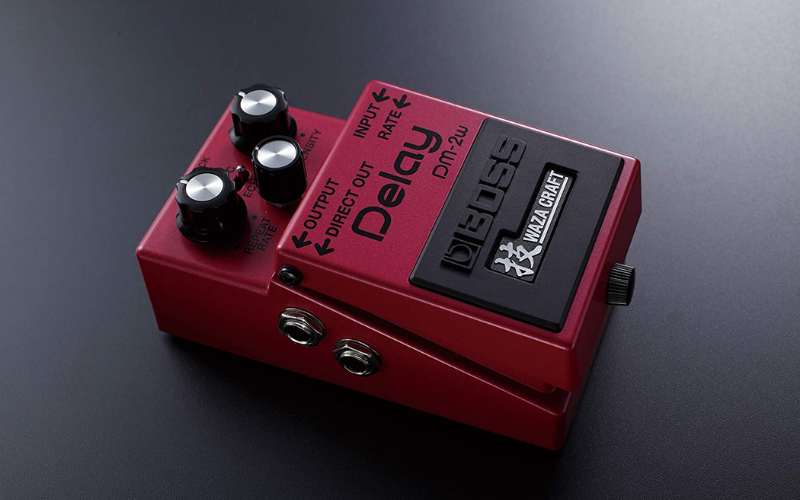