For those of you that want to take your movie and listening experience to a new level, a multi-speaker surround-system is a must. At the heart of this lies the AV receiver that is there to decode and translate everything that’s channeled its way.

The best AV receivers will do this and will also get the very best out of the other components in your system. The fact is that there are plenty of high-quality AV receivers all vying for your attention at this price-point. So, the question is, does this new Denon receiver do enough to justify its cost and justify you placing it in your cart.

So, let’s get this in-depth Denon AVR-X4400H AV Receiver Review underway and find out… 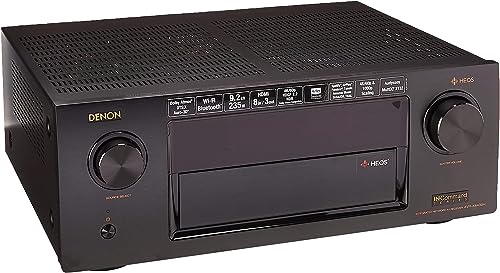 The all-new Denon AVR-X4400H is very much a case of evolution rather than revolution, and quite honestly, that’s no bad thing. The latest addition to the Denon family has wisely retained its simple and practical design. What’s more, it’s also kept the undoubted good looks and design cues.

The front of the panel is dominated by the two large control knobs on either side. One of the knobs controls the volume, and the other changes sources. In most situations, this is all you’re likely to need. When other controls and inputs are needed, you simply open the drop-down panel.

It’s a sleek piece of design…

The front panel is made from brushed aluminum, and the remainder of the receiver has a brushed metal finish. The quality is high, and it gives the appearance of a piece of equipment more expensive than it is. The receiver’s enclosure is solid and helps to keep resonance and stability under control.

The Denon AVR-X4400H AV Receiver comes in a choice of either silver or black. Currently, with silver audio equipment seeing a resurgence in popularity, this seems like a good marketing decision.

This is a 9.2 channel receiver. However, if you have your eyes on an 11.2 set-up somewhere in the future, not to worry. Thankfully it can be upgraded by the simple addition of an external amplifier.

This is a 4K compatible AV Receiver. It can produce 125 watts of power per channel. That’s more than enough in anyone’s language.

Covers all your audio needs…

It has eARC to help you enjoy the best depth of movie theatre sound quality possible. The Denon AVR-X4400H AV Receiver has all the latest audio formats. These include Dolby Atmos, DTS:X. You also get Auro 3D processing as standard.

For those of you that intend to spend time using it to listen to music through a two-channel system, you’re well-covered. The Denon AVR-X4400H-AV Receiver is compatible with FLAC, ALAC, DSD, and WAV files rated to 24-bit/196kHz. You also get BASS Sync support, a high end-feature that assists with LFE delay corrections.

A feature we very much like is the ability to work with HEOS systems. This allows you to play music through any of the HEOS 1, 3, 5, or 7 speakers in any part of your house. You can also control the system through your smartphone, which is very useful when you’re in a different part of the house.

If you prefer to run a wired extension, then this is also possible. Happily, you can run three zones. Even better is the fact that you can also run analog outputs through two of the zones.

As you’d expect, there are connections for every possible thing you could think of. The back of the Denon AVR-X4400H AV Receiver has every square inch covered in inputs and outputs. It can be a bit daunting at first glance, but the setup is easier than it initially appears.

We go into more depth about that later.

No shortage of options…

For starters, you get a total of 11 HDMI connections. Eight of them are inputs, and three are outputs. One of them is cleverly placed in the download panel. The others are at the rear. All the HDMI connections are 4K HDCP 2.2 ready, and they all support 4K 60Hz, WCG, and HCR.

There is a total of 11 speaker connections. As previously mentioned, only nine of these can be used without the use of external amplification. The 11 inputs, without an external receiver, allow for either a 7.2.2 or a 5.2.4 set-up.

Most of the rest of the remaining physical connections are referred to as legacy-connections. Essentially, these are the kinds of connections that your dad will probably be familiar with.

Joking aside, it’s good to see a modern receiver include a range of older style connections, so as not to make perfectly functional older pieces of potentially compatible equipment obsolete.

We wish more manufacturers would take a similar view.

The legacy connections include an Ethernet port, an antenna for AM and FM radio, an RS-232C port, an IR input and output for remote control, and a Denon Link HD input.

Wireless connections, other than for the HEOS systems, include Bluetooth, Wi-Fi, Spotify Connect, and Airplay. You, of course, can use it with all popular music and video streaming services, other than Spotify, like Deezer and Tidal. 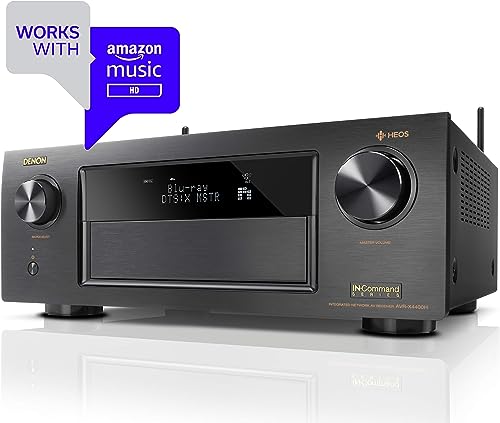 Probably the most important question is, what does it sound like?

The good news is that this is a highly capable receiver for any large room or dedicated mid-sized home theatre. Although it’s not the most powerful in its class, it doesn’t lack the punch or volume that’s required in these kinds of spaces.

Even better, when pushed to its limits, quality audio still shines through.

The Denon AVR-X4400H AV Receiver is more than capable of dealing with high-energy action movies. It can handle explosions, car chases, and flying debris in its stride. The depth of field and soundstage is impressive. It takes you to the heart of the action and will make you feel like ducking and diving during more exciting scenes.

But this hard-working AV receiver is much more than just about power and surround-sound immersion. There’s a lot of subtlety to the sound. This can be found both during and away from the action.

Even during more hectic and chaotic scenes, the dialog can be heard and is distinctly separate from what can be, at times, a background wall of noise. This is by no means an easy task. Similarly, in quieter moments, there is subtlety and finesse that would put many more expensive alternatives to shame.

Listening to music can be an equally enthralling and complete experience. This is a highly capable amplifier that delivers beautiful clarity combined with an amazing soundscape across a breadth of frequencies. Close your eyes, and as you feel like you can reach out and touch the instruments.

Although you don’t get the same level of performance in comparison to a dedicated audio amplifier at the same price, this doesn’t detract from its audio credentials. The bottom line is, choose your speakers wisely, and this a setup you will truly enjoy for many years to come.

We’re finishing on one of Denon’s strong points. There’s no doubt that Denon is top of the class when it comes to the ease of setting up their systems. They make something that potentially seems difficult into something easy. This is in no small part down to their slick and easy to follow on-screen GUI instruction package.

The fact is that it’s not only us that thinks this is a smooth setup system. The industry thinks so, too, as this is an award-winning piece of tech. We appreciate the thinking and the effort that’s gone in to make our lives easier.

Other than the practical help to get the connections in place and get things started, the further built-in assistance to get the most out of your system and sound is again first class.

The Audyssey MultEQ App is there to help you in this respect. It works to listen, calibrate, and customize your system to give you the maximum in listening enjoyment.

All in all, setting up your Denon AVR-X4400H AV Receiver should be a cinch.

So, there you have it. The Denon AVR-X4400H AV Receiver can decode and play just about everything you can throw at it. Not only that, but it does so and can translate it into high-quality audio that plenty of audiophiles would find little to fault. 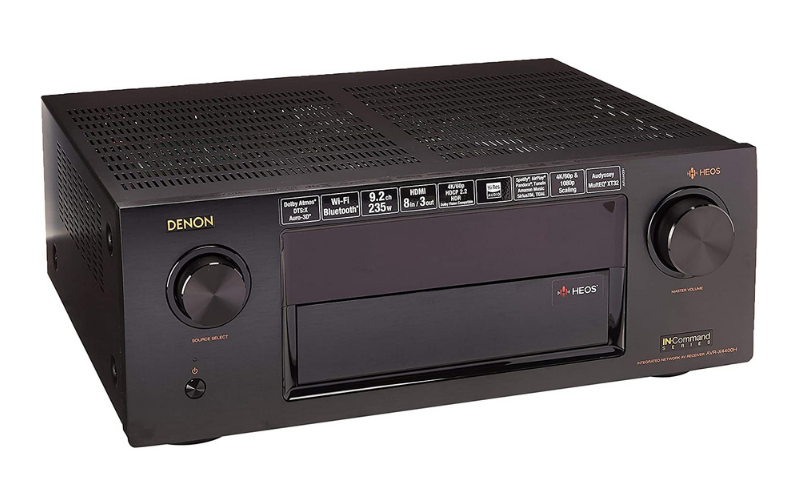 The Denon AVR-X4400H AV Receiver is a refinement of what was already a well-performing model. Hopefully, this AVR-X4400H review has shown that it’s very much an all-round, do-anything piece of kit. This is a highly competent and highly capable package that makes a very strong case for itself.

In turn, it’s therefore tough to beat in what is an already competitive market segment.