Combo amps are not a new idea. They originated in the 1920s and then became more popular and began to develop in the 30s with jazz combos. There is an age-old question – is it better to have a combo amp or a head and cabinet? That will depend really on the size of the venue you play in. A great sounding combo amp will give you more variety, but will it be loud enough?

The subject of this BOSS KTN-50-2 Katana-50 MkII-50-watt 1×12 Guitar Combo Amp review is one of those you might consider a great sounding combo. Today there are some powerful combo amps. And even the 50-watt amps, considered underpowered until recently, can really crank it up a bit. 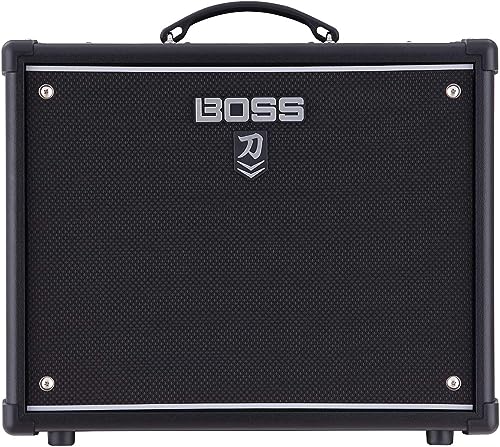 In the home, though, the combo is unbeatable, as it is for small venues. Get a good combo amp, and you can do and create anything, usually at the push of a couple of buttons. Choose a combo by Boss, and immediately you have access to the ‘Guitar effects giant.’ Is there anybody better at providing a wide range of pedals and effects than Boss?

We are going to have a look at one of their latest Katana amps. But before we do, just in case you have been on another planet for the last 40 years, who are Boss?

They are the Boss!

As far as effect pedals go, most would agree, and the amps aren’t bad either.

Founded in 1973 in Japan, they have built quite a name for themselves. They are, of course, a subsidiary of the Roland Corporation. They have built a great reputation on building great effects pedals for guitar and bass that are tough, sound great, and are well-priced. You will see them everywhere.

In later years they have expanded their market by manufacturing drum machines and amplifiers amongst other musician-related items. It is one of those amps, the Katana, that we are going to take a look at.

The Katana Mark2 is the latest manifestation of the respected Katana Range of amplifiers.

They have taken what was already a very good amp and made it even better. Boosting its core platform with more effects and features and, therefore, more sounds. Plus, there are new variations on existing sounds for all of the five built-in amp styles, which doubles-up the number of tones available.

On the original Katana, there were three types of built-in Boss effects. With the Mark 2, there are five giving you, even more, processing options. It has gone from being just a great amp to also being an amp for modelers and multi-FX users. Extra editor software has now been included, as well as a lot of other excellent enhancements.

So, let’s get a little closer and take a look at how good Boss can be… 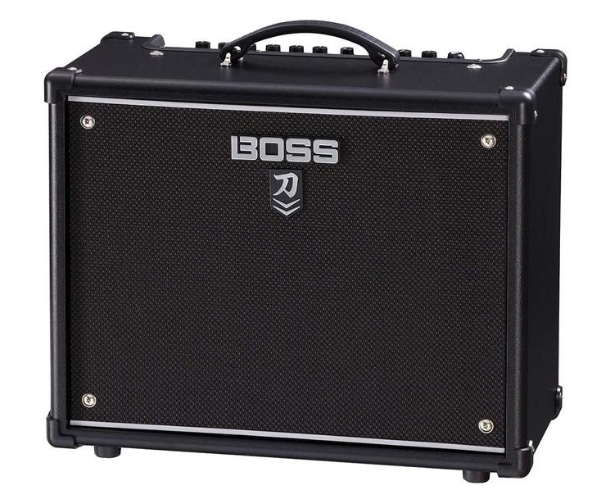 As there is so much to discuss in areas that are probably more important, we will be brief about the build. If you buy a Boss pedal, you know what you are going to get. A tough little cookie. This is a tough, slightly bigger cookie. It is not particularly big for a 50-watt amp, which is good news for most people. It measures 18 by 14.5 by 9 inches and weighs just 23.5 pounds.

The box has a rugged build with a black Tolex covering. Tolex is a great covering for products like speaker cabinets. It is hard-wearing and waterproof. It also looks good.

Inside our little box is a 12-inch speaker. It has two ¼ inch jack sockets, one for an instrument, one for a power amp, and a ⅛” aux in. Control panel, which we shall discuss next, is positioned on the top with the aux in, headphone socket, and USB on the rear.

The corners are secured with corner coverings for protection, it has a strong handle, and it has four small feet. The front has a gray cloth grille covering and the Boss and Katana model logos. Nothing fancy at all and quite understated. All this lulls you into a false sense of security before it leaps out and bites you.

The controls are located on the top of the amp and are quite simple to understand and operate. There is an instrument jack socket, and next to that, a selector for the type of amp. There are five options – Acoustic, Crunch, Clean, Lead, and Brown.

Next to that control is a Gain and Volume. The tone section sits next to that and is called an Equaliser which, if we are honest, is a bit of an exaggeration. It features three tone controls for bass, middle and treble. There are three effects controls, and finally, a Master, Power control, and off an on switch make up the display. 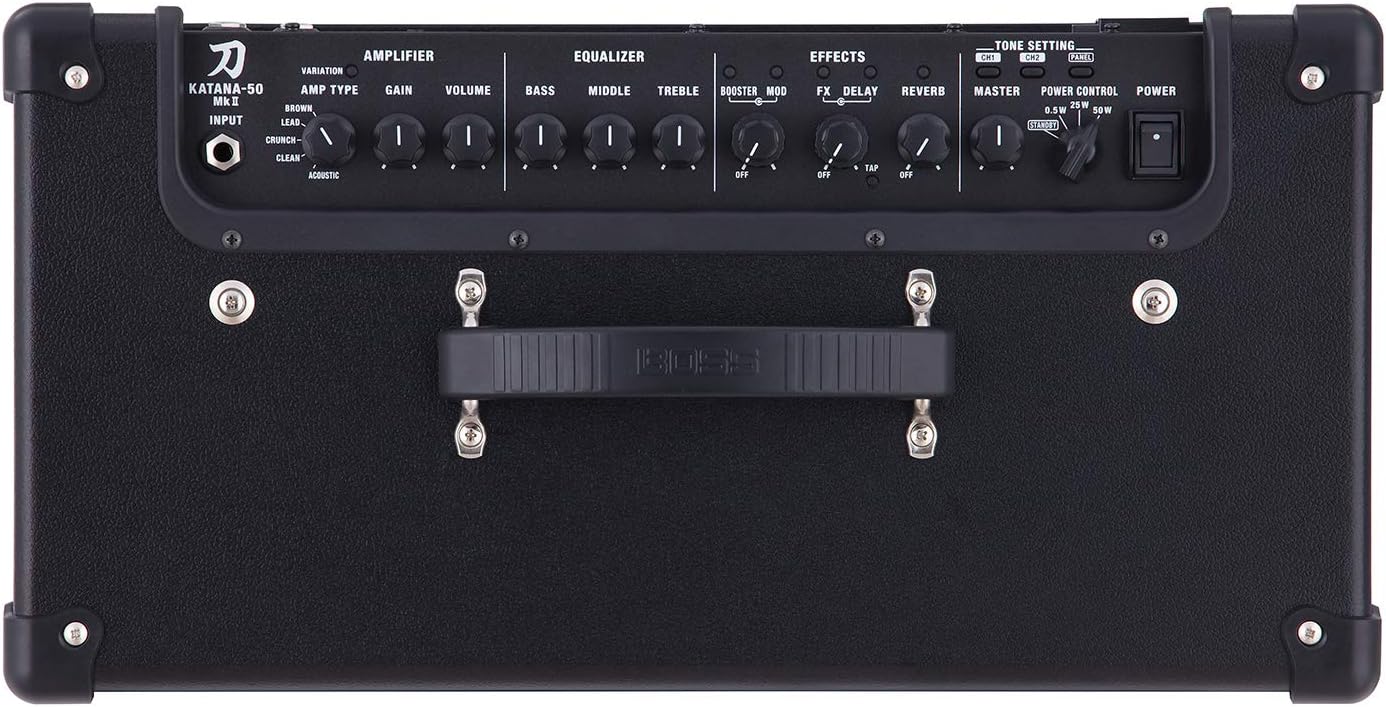 The power control switch is interesting and allows you a choice between outputs of 50, 25, and 0.5 watts. This allows you to get the overdriven sound even at very quiet 0.5-watt levels when it’s time to be nice to the neighbors. The controls are all laid out quite well on the top with rotating dials.

Just below them and facing the rear are some inputs for headphones and or rec out, jack socket for a foot control or expression pedal (both not supplied) and a USB. At the other end a mains socket. When you use the headphones, it operates a bypass system for the speaker, so just the phones are operative.

The performance of this amp, and hence the sound it gives you, has been given a very large update on its predecessor. Good as that was, this goes to another level. Vintage tones to more modern power sounds. There is also a special dedicated sound for an acoustic-electric guitar.

There are now five effect categories which can all be used simultaneously. This puts all the power and effects options of Boss pedals at your fingertips. And of course, some of those effects are some of the best in their class in terms of pedals.

They are built-in at the factory, and each effect has three options each. This gives you 15 ready to use sounds. In effect, a Boss pedalboard loaded with some of their best effects.

More than this, it is not only a stand-alone combo; it can also operate as a cabinet for another preamp or effects unit. If you connect the power amp in on the back panel, it will bypass the built-in preamp, and you can use other options.

It has two banks of two memory so you can save your effects settings. You can call them up when wanted. The USB and phones/recording output allows you to record directly into any DAW of your choice. The sounds can be further tweaked by using the Air Feel setting available on the online Boss Tone studio.

But more on that later…

In the controls section, we mentioned the Power Control. We all know that at lower volumes, you cannot achieve those really overdriven sounds you get at high volumes. The Power control performs that task for you. You can select as quiet as 0.5 watts and still get a thick, rich sound. Great for practicing at home. This adds an extra level to the performance of this amp. 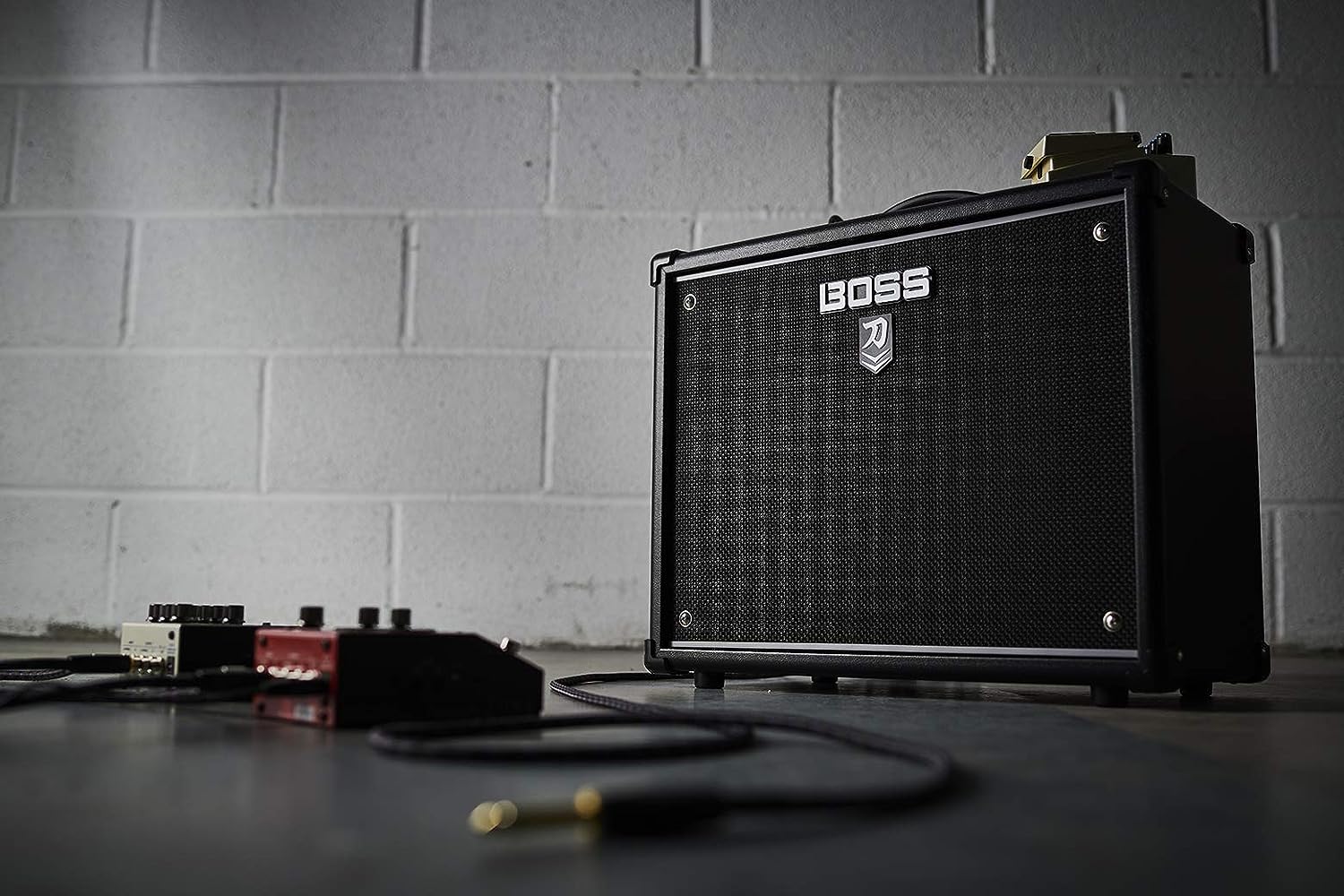 We are tempted to say it is a Boss amp, how do you expect it to sound? There is only one answer to that in the Katana range. Having the various, wide-ranging options of a full pedalboard at your disposal, tone-shaping becomes easy and varied. The sound is good, very good.

The amp choices alone, giving you a choice between Clean, Lead, and Crunch, taking you from clear ringing tones through to an earthy growl. The Lead button takes you to a higher gain for your solos. The Mark 2 gives you a close representation of those vintage tube amps of the past. It delivers a distorted sound that is full of character.

An extra amp choice is saved for an acoustic-electric option. That allows you to plug in and have all the effects at your disposal.

Is there a website where you can shape the sounds even further?

Of course, there is. The Boss Tone Studio lets you take the sound-shaping to a higher level if you want. Given the number of effects and sounds that are built-in, you might not need to. However, if you do, there are a further 60 further effects sounds for you to discover.

You may well have gathered by now that we are impressed with this amp. There are so many options to hand, and it’s all very impressive. The amp is built with the two criteria you expect from the masters of effects.

Firstly, the cabinet is strong and able to take a few knocks. Secondly, the sounds are what you would expect from Boss. Rich and effective, and easy to dial-up. At the price point, it is going to be difficult to find a combo amp that is better than this. Its price point is cheaper than many head units alone.

A very good amp. If you are looking for a quality modern combo, then this could be the one for you. You will not be disappointed.

To find out more about Art and our other writers, please take a look at our About Us page.