We are looking forward to this Blue Snowball USB Microphone Review. They are an interesting company that makes a number of quality products. Essentially Blue is an audio design and manufacturing organization that manufactures microphones, headphones, and other products for musicians, consumers, and audio professionals.

They were founded in 1995 by an American and a Latvian. And began producing microphones for use with computers and recording software for musicians. As with most entrepreneurial companies that are successful, they were bought out in 2008. They changed hands again in 2013 and 2018. Today Logitech holds the controlling interest.

The quality of products, though, has not decreased, and they are still recognized as an innovative and creative manufacturer. One of the original owners of Blue, the Latvian, was a recording engineer, the other, the American, a musician. Together they had a well-founded understanding of what the market needed.

From 1995 to 2004 the microphones were made in Latvia, since then, they have been made in China. As they do use a few parts that are from America, it allows them to say ‘Made in the USA.’ The capsule, though, the heart of the mic, has been made in China since 2005. These days they are built in China but tested in America.

Wherever is irrelevant to us, we don’t care if they were built on the Dark Side of the Moon. What counts is the performance of the mic and its quality — that and of course, its value for money. So, let’s have a closer look at the mic in this Blue Snowball USB Microphone Review… 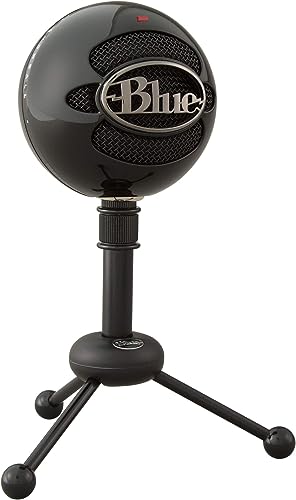 This microphone was built with a very simple idea. The microphones on computers or webcams were and are still usually awful. Blue, at the encouragement of Apple, wanted to produce a microphone that would excel. One that would sit neatly between the professional microphones and the cheap efforts computers usually offer.

Better known for its good quality recording and boutique microphones, Blue introduced the Snowball in 2005. At the time, it was one of the first USB microphones with decent quality. The days of the plug and play USB microphone had arrived. 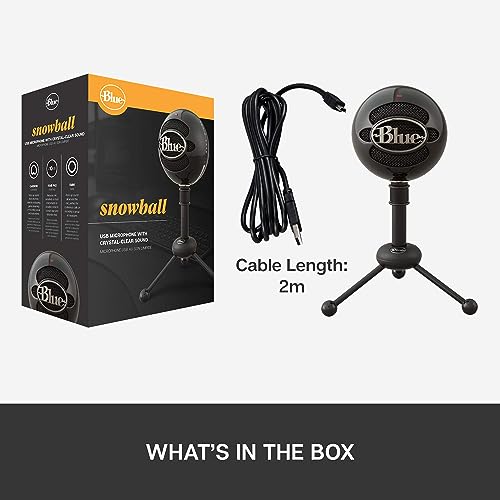 Fourteen years later, with very few minor modifications, it is still with us and still doing the business. Others have come along, but the Snowball, with its creative design, is still the preferred option for a lot of people.

So, let’s take a closer look and see why the Blue Snowball USB microphone is standing the test of time…

We think Blue was always trying to create something new and eye-catching with this design. It resembles an eye looking at you from on top of its stand. It was never going to have conventional build requirements. Conventions that insist the mic should be tough and ‘road-ready.’

However, those requirements were not going to be needed with the Snowball. It is designed to work with a computer. Most of its working life is going to be on a desk. It can be used held as per other microphones, but the design idea means it is likely to be static. A tough, rugged build was never a big priority. 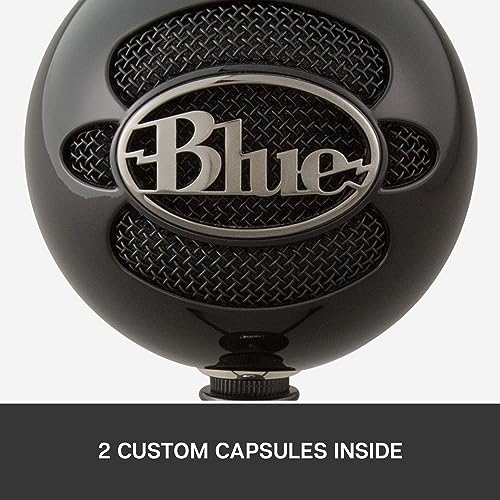 Having said that, the build quality is ok…

Some parts of the mic are metal, while some are plastic or rubber. The tripod stand though is metal and is built to move around a little. It is quite a modest compact size at 4.88 inches bt 7.88 by 10 inches, and it weighs just over 2 pounds. It is a telescopic build but will only extend up about five inches.

The microphone sits on top of the stand but will only rotate. It does not tilt. This may cause a little inconvenience in certain circumstances. We suppose it might be possible to find a way to be positioned at an angle if the was necessary. But, it might not be a very stable solution.

As we said earlier, this was designed to catch attention with its design. You are hardly going to confuse it with another mic. As with all design issues, there are good and bad points. The microphone is ball-shaped and therefore needs to be used on its tripod.

It is possible to detach it and hold it for use, but we can’t see that working well. Hand movements in just holding it would be a problem as there is no shock mount. Handling noise would certainly be a problem. After use, the legs of the tripod are simply folded up.

Blue has made sure that they get plenty of recognition by putting their logo right on the front of the mic. We find that a little irritating after a while. Beneath the logo is the grille made from a wire mesh. There is a basic windscreen built-in, as we have mentioned. Behind the grille are the two half-inch capsules. 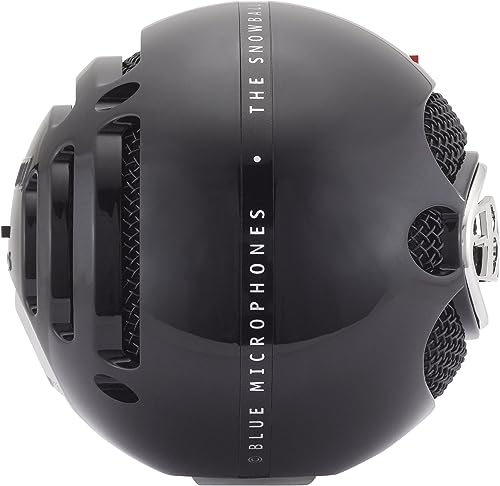 Towards the top is an LED that glows when it is connected to a computer. On the rear, there is a USB port. That is the only output. There is no capability for a headphone connection anywhere or a line-out.

This might be a positive design decision by Blue. Connecting cables to the rear of the mic would only increase the potential for unwanted external noise. So possibly the simplicity of just the USB connection to the computer is a good idea.

Also located on the back is one of the good design features of this microphone. This is a switch that gives you the choice of three operational modes from the two built-in condensers. These recording modes are Cardioid, Cardioid -10dB, or Omni.

The first, Cardioid operates exactly as you would expect from this polar pattern. It will only collect the sound source placed immediately in front of the mic. Blocking external sounds that may occur from the rear or the sides. This option is perfect for recording vocals.

Option 2 is cardioid but for louder sources. It has a 10dB pad which deals with any potential distortion or overload.

Option 3 gives you omnidirectional mode picking up its sound from any direction. This makes this microphone suitable for a variety of uses. Studio use, of course, for vocals, but it will also handle louder sources like drums or guitars.

The Omni, though, gives you the option to record multiple sources. This could be group interviews or podcasts. If used in this way, the participants might all have to be close to the mic. With its two condenser three option capability, it is prepared for most things.

It is a very good idea, but the downside is the switches are labeled 1, 2, and 3. Possibly an indication of what function each option performs might have been more useful. They have a frequency range of 40Hz to 18kHz.

What it comes down to with a microphone is how good it sounds. For the majority of its potential uses, it certainly provides that simple plugin and record option. It provides a well-defined sound and a good frequency range and a low level of any unwanted background noise. It also provides simplicity to recording voice.

Before we all get too excited, though, it is worth reminding ourselves. The price point of this microphone is set about right. Therefore it is not going to produce studio-based results equivalent to a professional studio mic costing thirty times more. 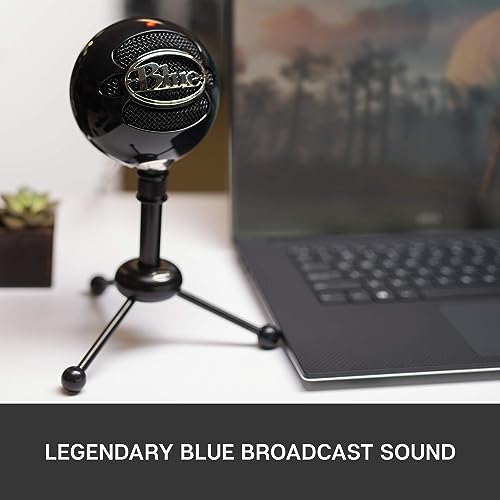 But if we are, to be honest…

It won’t give you the results of microphones like a hundred dollar Shure SM58. It may solve some of the portable problems of recording vocals in a home studio or just on a computer. But it is not a one-stop answer. Just the environment of the room is enough to create sound problems. And the finished recording is still going to need EQ and compression, etc.

As we say, it is not a pure solution. But it is a step down an economical road to a solution. It should also be remembered that this is a mono mic, and it does very well recording a single voice or instrument. It might not be so good where you might really need multiple microphones in the case of multi-person talk recordings. 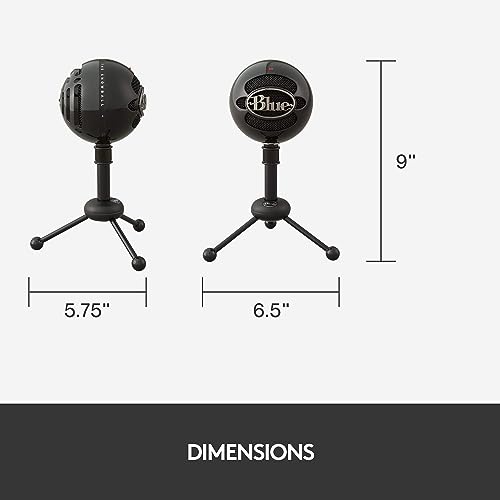 Also of interested may be our reviews of the Best Microphone Preamps currently available.

As a microphone unit, it is a rather basic product. It doesn’t contain too many fancy attributes, but it does give you the essentials at a very good price point. In the right environment, it also delivers a good sound.

For the price, you are getting a USB microphone with three separate patterns. It is well-constructed and has a steady tripod stand and is easy enough to carry with you if needed. And from a practical viewpoint, it just plugs into your computer.

To be honest, not really. We mentioned the labeling of the pattern switching, which in our view could have been more explanatory. There are no other audio outputs, but that might be a good idea, as we have said.

Given that the mic really needs to be on its tripod, we can see a few problems there recording vocals. The singers will have to learn not to flap their arms around when recording — minor issues really and not a deal breaker.

While doing this Blue Snowball review, we have found some good things. There are too many plus points with this mic to try and eke out its problems. It is a simple plug and play mic for your computer. It has an interesting design. And you will be hard-pushed to find an alternative that performs as well as the Snowball at this price.

The Blue Snowball USB microphone is a very good buy indeed, providing you do not expect too much from it. It will not give you world-class studio performance. But it will give you a good quality basic microphone facility for recording directly to a computer. That facility alone makes it a good value at the price point.