Recording a sound goes back a very long way to a time when even Thomas Edison could not have conceived of the BEHRINGER (XR12). It was, of course, in his day less than basic.

In the 1920s, as recording became more popular, it was very much a hit-and-miss operation. Sounds were mixed and recorded all at one time. If at the end the balance was wrong or there was a mistake, you did it again or just left it as it was.

The chance to use multi-track machines changed the rules and what was possible. In the 60s, eight-track recorders came into being. That meant sounds could be recorded on separate channels. Combining and treating the sounds could then be completed later for improved sonic results.

In the 80s, recording at home and basic mixing became even easier. Bruce Springsteen recorded the album Nebraska on a Portastudio. The Eurythmics had a number 1 with Sweet Dreams recorded on an eight-track, Beck’s classic Loser was also a massive hit that was recorded on an 8-track recorder.

The digital audio workstation also appeared in the late 80s. And finally, in the 90s, recording went to computers instead of tape-based systems. We say finally because it is still evolving. But you know what we mean. Things have continued to move at an incredible pace.

Now we have mixers you can walk around with and set up anywhere. They can even be controlled remotely from linked devices. As we said that the beginning, even Thomas Edison couldn’t have foreseen this. The XR12 is a Behringer product. Some might not be familiar with them. So, it might be worth having a brief look…

Miles apart and not only in distance. Behringer is a German company that doesn’t have the track record or longevity that some can boast. Founded in 1989, they have come a long way in a short time.

Most of their products are designed in Germany, so we know what that says about quality. They are more often than not made and assembled in “Behringer City” in Guangdong, China. Their own ‘city’ if you like, opened in 2002.

They manufacture a range of products and now hold a sizable portion of the market. Always competitively priced, sometimes basic, but creative and functional, they do the job. And at a fraction of the price of some of their more ‘illustrious’ competitors. That should be enough for starters, so let’s move on and find out what the Behringer XR12 is all about? 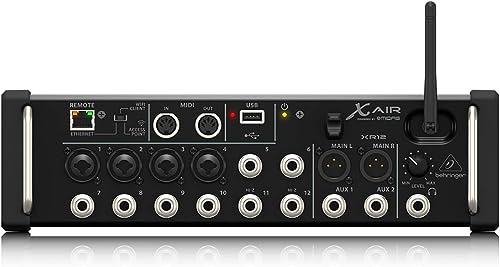 When Behringer brought their X32 to the world, it completely changed the way we viewed what was possible. What the “boys from the city” have done is take that impressive technology and put it into a compact little box.

The XR12 is a rack-mountable 12-input mixer that has four very special preamps. More on those later. It has the effects rack from the X32, bus EQs, and a 100 band real-time Analyzer. Integrated WiFi control and a stereo USB recorder are included. And it can be controlled from your iPad or Android tablet. All you need is some mics, and away you go.

This XR12 might just make you stop and think about how you set up for the live performance and mix. So, let’s have a closer look in our in-depth Behringer XR12 review… 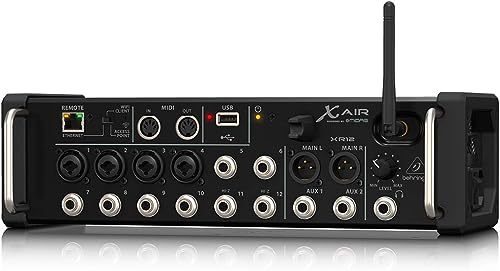 At 13.11 by 5.87 by 3.74 inches and weighing just 5 pounds, there is a lot packed into one of the best compact mixers. However, it’s a bit more than a convenient box for stage performance or studio. And if you should decide to rack it up, it comes with rack ears and bumpers for protection.

There are twelve inputs, as we said, eight of them with standard ¼-inch jack sockets. We have already mentioned the 100-band RTA on every channel, and the effects rack from the X32, but we also mentioned preamps.

There are four microphone preamps designed by Midas. That means high-quality audio reproduction in both studios and on stage. That was what we meant about ‘special’ preamps.

Now we are going to go out on a limb here. We don’t imagine for one moment that they are the best that Midas can offer. Nor are they the same as they include in their high-end equipment. That might be expecting a bit too much.

However, the fact that Midas designed them for the X12 speaks volumes in our book. And after all, even a modest Midas preamp is likely to be a lot better than most of the competition. This ensures that the X12 features some of the best preamps on the market.

The XR12 has four effects engines taken from the X32. This rack gives you four stereo or eight mono effects processors. They include Delay, Chorus, etc. And the XR12 can run true-stereo reverb that is production-quality.

It can do this at the same time as running a 31-band EQ on the aux and the main buses. And you can do this without the need for any extra hardware.

You can have the choice of simulations of some serious legendary effects from the best studios in the world. The Lexicon 480L and PCM 70 plus the EMT250 and the QRS reverbs can be selected in any combination. As a result, this is one of the best audio mixers with effects you will find.

Furthermore, with onboard processing, the computer is relieved of any heavy work during mixing using plugins to the DAW. All you need is stored away under the bonnet. A rack full of studio-quality effects. Not a bad scenario to work with.

All we have talked about so far is the potential for studio and live work. But there is so much more to this mixer than just that. Yes, it will be great for mixing vocals using multiple mics, but there’s more.

It can be a real challenge to balance all the participants to reasonable levels with so many open mics. But then, of course, if there is a moderator, to also ensure they can be heard above them.

Dan Dugan is often referred to as the inventor of the automated microphone mixer; he was also considered one of the first sound designers. The X Air gainsharing design from Behringer is a first for small mixers like this. It is based on his automix system.

Therefore, this system can easily handle fully-automated mixes that are using several live microphones. It can control the levels of any mics you select in real-time. And this without applying any noise modulation or gating. All of which makes this one of the best multi channel mixers currently available.

To ensure the XR12 is mobile and ready for any environment, it comes with integrated WiFi. You will have complete control of all the functions of the mixer without any need to use an external router. This will also allow you to move around the location. You can then hear what the audience is hearing in any area and make adjustments if necessary.

The WiFi will be suitable for the majority of locations, but if the venues are larger, there isn’t a problem. Using the Ethernet port, you can integrate into a larger system and connect to a wired network. That said, the X12 is likely one of the best wireless audio mixers on the market today. 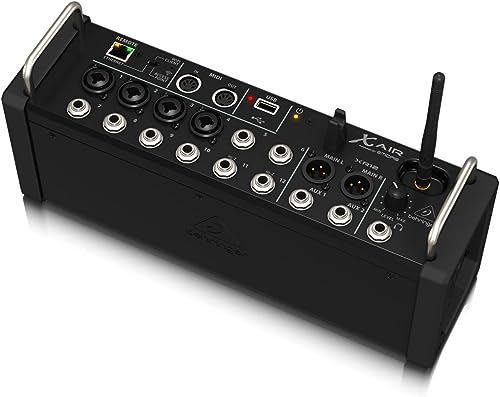 Conveniently placed on the front of the mixer is a Type-A USB. This offers the XR12 the chance to not only be a great solution for mixing. But you will also be able to record live tracks to hard drives or USB flash media.

Whether you are using it for live performance or working in a studio, this makes it easy to record some great work and do so with clarity. Overall, the Behringer X12 is a great example of the continual evolution of audio mixers.

For all your audio and recording needs, we have you covered. So, check out our in-depth reviews of the Best Digital Audio Players, the Best Audio Mixers, the Best Beat Machines for Hip Hop, the Best DJ Mixers, or the Best Studio Headphones for Home Recording on the market in 2022.

You may also like our comprehensive Behringer XR18 Digital Mixer Review, our Behringer X32 Compact Review, our Roland Aira TR-8 Rhythm Performer Review, our Best Microphone Preamp Review, and our Focusrite Scarlett 2i2 Gen 3 Review for more amazing products you can buy.

This XR12 is part of a family of mixers from Behringer. They are all designed with one purpose in mind, to be flexible, mobile, and mix great results. Behringer has exceeded themselves. And they have done it with that simple German philosophy. Make it as good as you can but as cost-effective as possible. 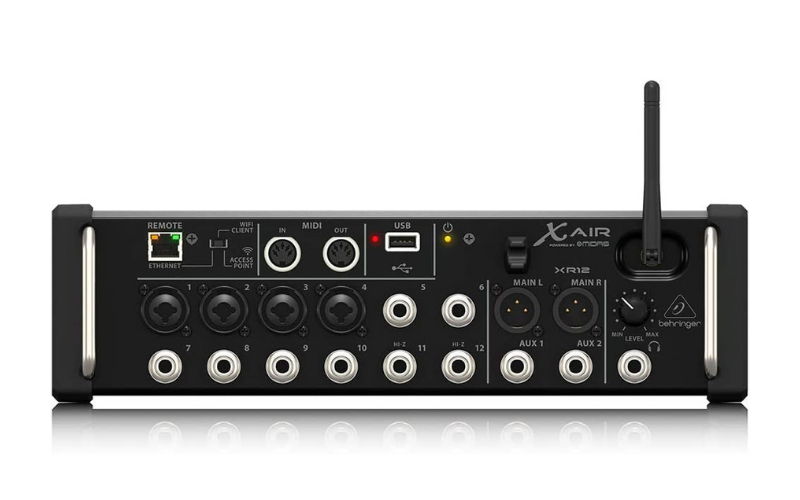 Some may see the fact there are only four mic preamps as a negative. We know there are some situations where four might not be enough. But those situations are uncommon, and there are bigger versions of the XR12 in the family. The XR16, for example, has 16 mic inputs and six aux inputs. But that will only be needed in certain circumstances.

For the majority of applications, four will be plenty. But it isn’t just the mic preamps; it is everything else. To have a mobile mixer like this with so many great effects is something special. And what is even more special is that you haven’t got to sell the car to buy it. An excellent mixer from Behringer at a great price. There’s nothing else to be said.

Until next time, may the music treat you right.