Headphones have been around for quite a while. In fact, as soon as the electric telephone was invented, they were needed so people could hear. The first telephone operators also had to use them, because amplifiers were still not invented. But, how long after the headset or headphones did someone have the idea of having in-ear earphones?

Not earphones quite like those featured in this Bang & Olufsen Beoplay E8 review, of course, but something that did a similar job. You would be forgiven for assuming that they were created quite recently — a modern-day necessity and invention. But you would be very wrong.

A long time ago…

The first in-ear headphones were patented by a French genius by the name of Ernest Mercadier in 1891. Even before what we now recognize as headphones. They even had a very early form of noise canceling. Clever man, our Ernest.

They’ve come a long way since then. We are going to have a look at an excellent set, the Bang & Olufsen Beoplay E8. But before we do, let’s take a look at Bang and Olufsen themselves. They have had what you might call an interesting history…

Founded in 1925, this Danish company was the high-end of audio and made a serious contribution to hi-fi. It wasn’t just the sound which, of course, was very good. It was the style and the design and the look, it just said, ‘affluence’ when you looked at it.

During the 30s and 40s, they achieved many great innovations working with the film and circus industries. But then came WWII. They took a hit, literally, when pro-Nazi’s burned down their factory for non-cooperation with the then invading Nazi forces. You could argue they never really recovered.

But did they sound good?

After the war, production resumed, but there was no money for high-end anything. They struggled on, through the 50s, 60s, and 70s, still making classy equipment, but by 2000 they were in trouble. Gradually it was sold into little pieces owned by a variety of companies.

They are a company that a lot of people have heard of, but very few can actually name a specific product. They are still capable of making great products, but the style of marketing leaves a bit to be desired. Being so fragmented, Bang and Olufsen haven’t a marketing image or style now. It is just a name and a product. Very sad.

We are going to be looking at one such product… 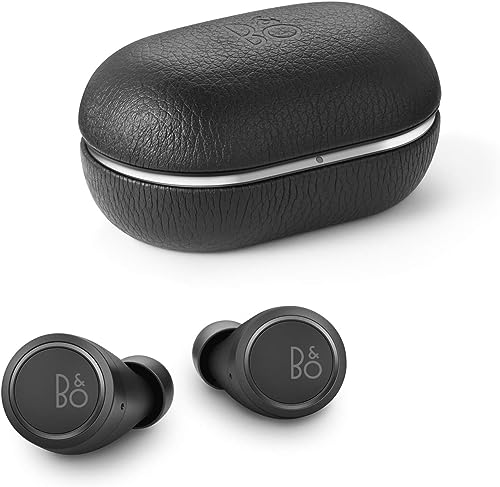 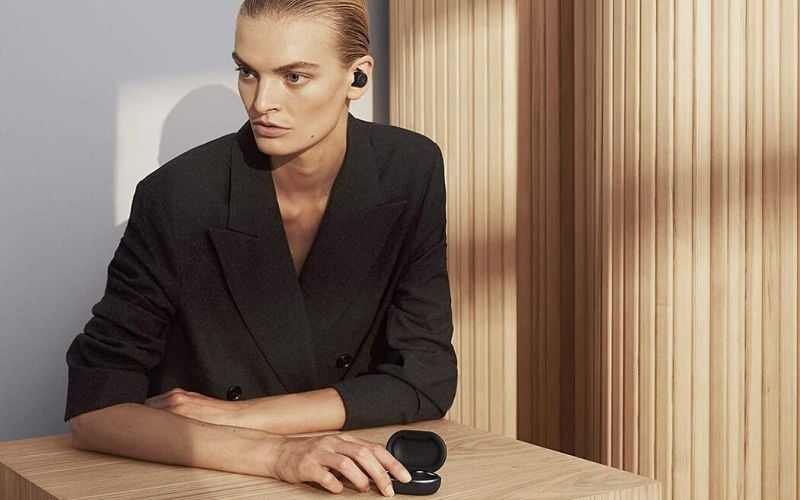 Bang and Olufsen have produced earbuds before, but these are more powerful and have extra battery length. They have also been given a great looking leather charging case and a stylish, if rather large design. New innovations with Bluetooth and advanced codecs have been included to give reliable and efficient connections.

These cordless earphones will bring you that Bang and Olufsen sound wherever you go. They are designed for commuters and people who prefer to be discreet about their music.

These earbuds have a very basic design and so do not draw your attention with any visual demands. They are made completely of good quality plastic and are therefore very lightweight. The left earbud weighs just 6 grams and the right 7 grams. There is a difference because the right earbud is what you might call the controller. It sends audio data to the left.

To add to the design style, they are squared off in shape, which gives them a nice look.

The battery performance is very good. You will get 35 hours of playtime at reasonable listening levels. That is seven hours of play from the earphones and an extra four charges from the case if needed. 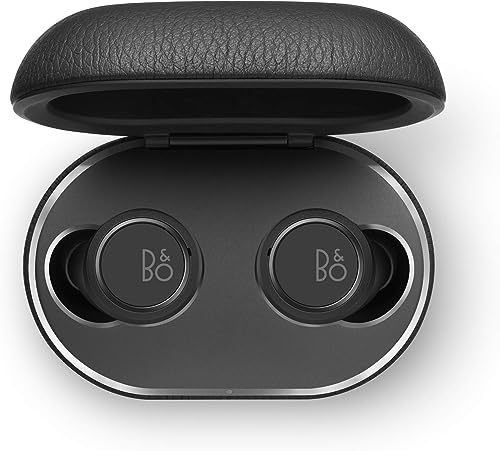 There is a wireless case for charging, which is beautifully and impressively made of leather. It has been given a flatter design than other similar charging cases. This allows you to carry it around in your pocket without looking like there is something wrong with your leg. You can, therefore, charge the earphones at any time.

The earphones fit neatly into the case with a magnetic click to ensure a good connection and security. However, we suggest you put the earbuds in the right way, or they will not charge. Taking that extra seconds to make sure they are installed properly will ensure you get a decent charge in both earphones.

You can see they are charging efficiently and correctly through two LED lights. These are located on the back of the case.

You cannot fail to be impressed with the typical Danish minimalist style of the earbuds and the leather case. Inside the case, there is a brushed aluminum inlay that holds the buds while charging. Good materials and well-engineered, they all complement each other in their style and design.

One of the problems with earbuds or earphones is the controls. They all have to be located in a small area and can be quite confusing to operate. Nature of the beast in most cases. These are no different.

They work well, but they are a little complicated until you know where everything is and how to operate it. The left and right buds share the workload. It is a case of memorizing the number of taps and holds. 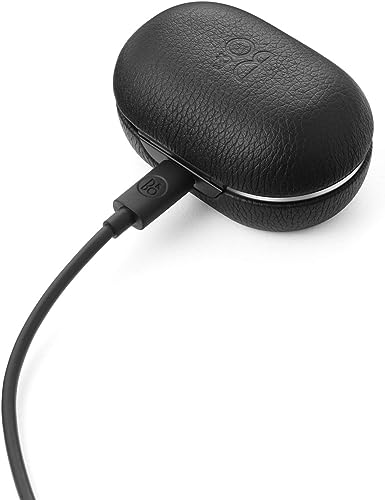 Everything at a fingertip…

The touch interface is responsive, and you can switch between tracks and take calls and also activate voice commands. All this without having to take your connected smartphone from your pocket. There are also a few basic functions for managing the sound, and you are able to use what B & O call transparency mode.

These earphones do not have noise cancellation; they have ‘transparent mode’ which is really the exact opposite. Noise cancellation uses microphones to remove external noise. Transparency mode uses them to let in the sound.

There are three different settings that let you choose just how much sound you are going to let in. This mode doesn’t cancel out the music; it just lowers the volume allowing you to hear what is necessary. It is a good feature that will allow commuters to hear information without needing to remove the buds.

Some will be critical of these earphones for not having noise cancellation. They also do not have an auto-pause facility either. At this price point, they have a point. But practically, it’s not hard to defend the decision to exclude them. Are they really necessary?

Always hard things to quantify. What is comfortable for one will not be for another. Bang and Olufsen have reduced the size of these earbuds somewhat to cater for the smaller ear. 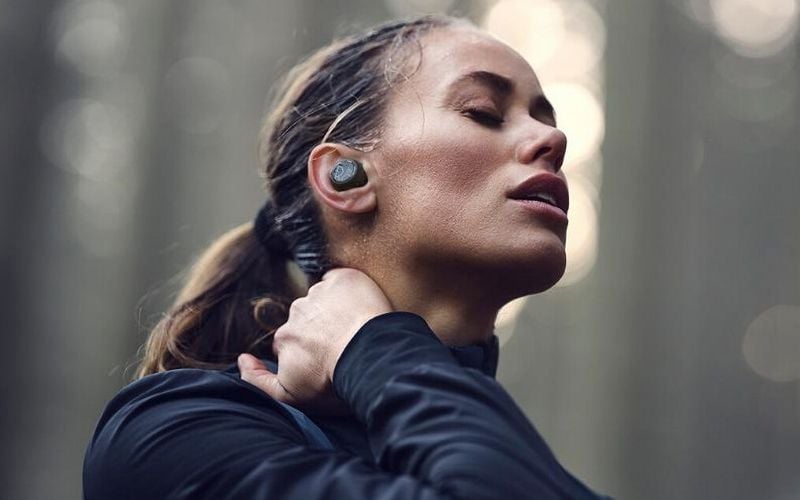 And they have designed them to be less intrusive. This means they are probably no good for activities as the fit would not be tight enough. These are for people who prefer a gentle fit that isn’t too deep or tight.

They stay in place quite comfortably and don’t fall out, but you will be aware you have them in. They are neither water nor sweat resistant, so care should be taken in the environment where you wear them. If it is for running or the gym, then you probably need to look elsewhere.

They are Bang and Olufsen, so you are going to get a B & O sound. They have been tuned by their sound engineers. That means the low end will be a little withdrawn, and the mids quite prominent. Highs will also be held back a little, especially at volume, and they will give quite a neutral sound.

This will definitely not impress those who like their brain to be assaulted by the low frequencies. We can say goodbye to them at this point.

If you are not familiar with this kind of soundstage, you might be disappointed. It is a sound that is not expansive and can feel very narrow and defined. Having said that, it is clear and accurate, and being so neutral, none of the frequencies are over-emphasized. That in some people’s minds is a real positive.

There is an app. Of course, there is. There you can tweak the sound to get exactly what you want. It has four basic settings of warm, bright, relaxed, or excited. There are some presets which take the sound management a stage further, offering suggested settings for commute or podcast plus a few others.

At first, they might not sound like you expect. But after a short time, you will begin to appreciate them.

The Bang & Olufsen Beoplay E8 is right up to date with their connection technology, with Bluetooth 5.1 installed. The AAC and Qualcomm aptX codecs give you pure and concise sound from all of your iPhone or Android devices. You will get a quick and reliable experience that will also reduce the level of battery use.

Pairing with your phone is easy. Just tap and hold both of the earphones for about five seconds. The light indicator will indicate a connection by flashing blue. The usual connection distances of about 30 feet apply. When you have finished a session, the Bluetooth will disconnect when you put them back in the case.

Or, if you want to try something a little bit different, take a look at the Best Bone Conduction Headphones on the market.

These are very typically Bang and Olufsen. The under-stated earpiece design, the leather charging case, and brushed aluminum all say chic and classy.

However, they will receive their fair amount of criticism we feel. Some of that may be justified.

To us, the lack of noise-canceling may be an issue, and the lack of an auto-pause facility may also. We accept that noise cancellation could have been included, but not having auto-pause is to us rather irrelevant. Bang and Olufsen chose to use their transparency mode instead of noise canceling. This is still a good and very useful feature.

Another set of arguments could be about sound performance. This is always a slightly difficult point to argue as the sound is a very personal thing. No, they are not going to give you thumping bass and ear-shattering highs – to many, that will be a blessed relief.

They might then be identified more along the lines of what genre they most suit. It will not be bass reliant music but more likely to be a gentler style.

Finally, and possibly something that might break the deal for some will be the price point. Bang and Olufsen are known for not being the cheapest around. These definitely fall into that category. Some are going to think that they are very expensive. Indeed there are similar sets of in-ear earphones by some big brands that are cheaper.

These though have something the others don’t have, and that is their style. It says a lot about them. In fact, the understated and sophisticated design matches the sound stage in many ways. Chic and sophisticated. We like them even though they are quite expensive for what they are. 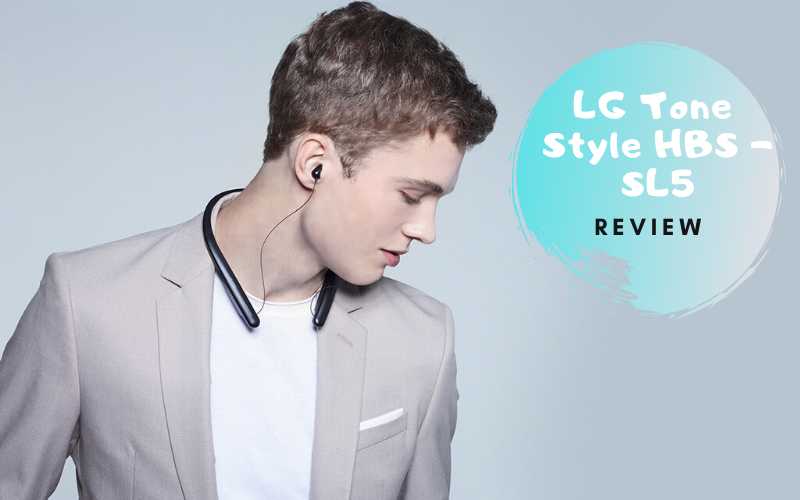 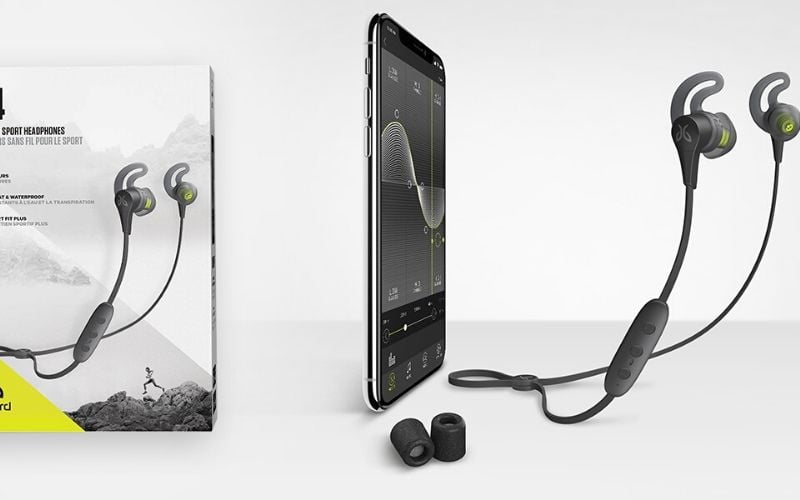 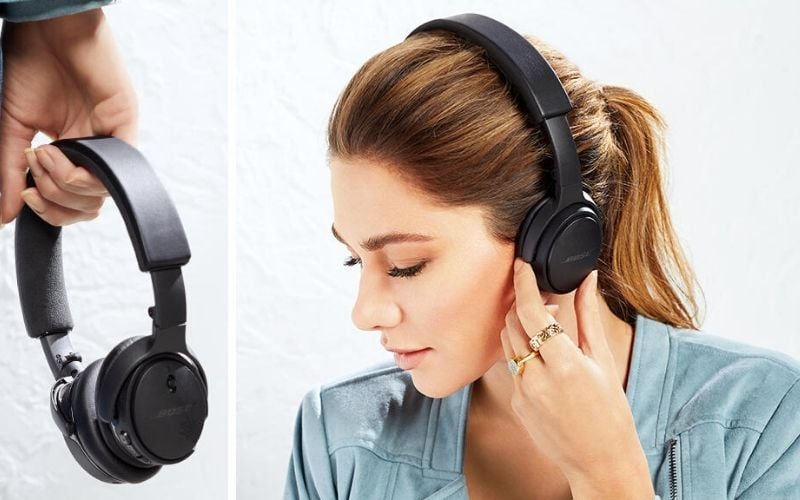