There’s been plenty of hype around these headphones in internet land. The Audio-Technica ATH-M50x Professional Studio Monitor Headphones have been hailed as being great sounding and offering outstanding value.

We don’t disagree with either of these two statements. However, what we really want to more closely examine in this Audio-Technica ATH-M50x review is how they stand up as great studio headphones as well as great headphones for more general listening.

So, let get this review underway and see what they have to offer… 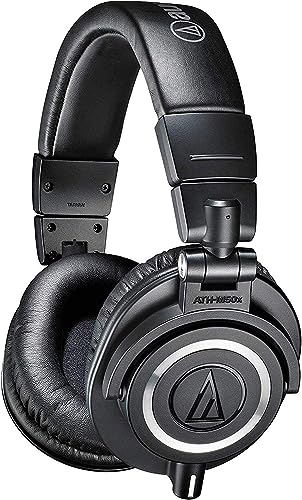 Wearing a pair of Audio-Technica ATH-M50x headphones won’t make much of a fashion statement. If you are looking for a cool looking fashion accessory, in headphone form, move on. There’s nothing for you to see here. Makes yourselves a cup of tea or coffee and forget Audio-Technica forever.

Now, that’s not to say that the headphones don’t look great. They do, in their own stylish but understated way. We like the brushed aluminum ring and the simple logo on the ear cups. We like the co-ordinated headband and earcups. And we like the large and proud Audio-Technica name printed on the headband. 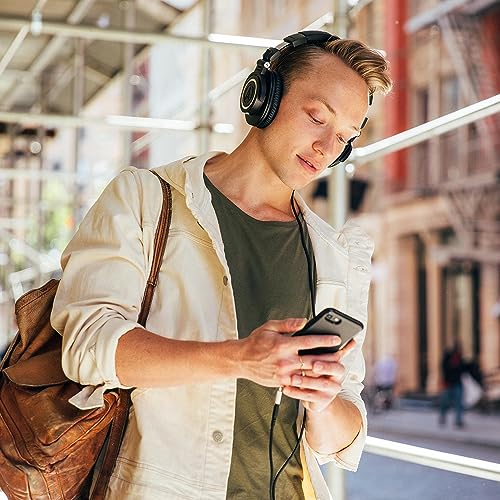 This is all good…

However, they’ll never have the cool factor of something like a pair of Beats or Skull Candy. And that’s just fine, it really is, after all these are primarily marketed as a set of monitor headphones.

So, we’ve established that Audio-Technica isn’t in the fashion market.

The next question is, can they also be used on your daily commute?

Audio-Technica ATH-M50x Professional Studio Monitor Headphones have a larger profile than a lot of the urban style headphones you see people using whist going to work or running in the park. They do have a slimline ear-cup, which is good, but at the same time, the guts of the headphones make them a little bulky.

They’re not as bulky as a typical set of monitor headphones, but they’re still pretty big. We think that they’re borderline to use for your commute to work. As for running, no, we think they’re just too big.

Can they be used in the studio?

Though the headphones are predominantly made out of plastic, they do never the less feel like a quality product. They punch above their weight in this department. They give the impression of being a more premium made and a premium-priced product.

And there’s nothing wrong with that… 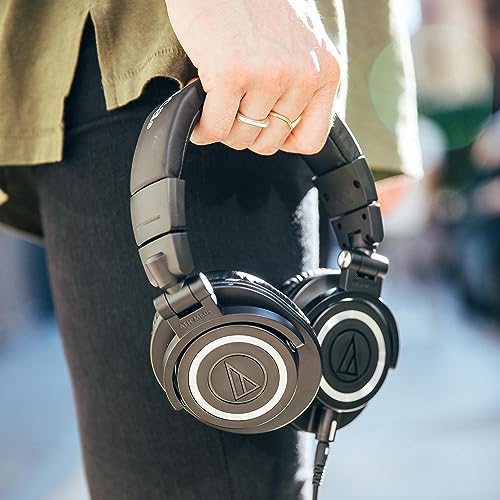 Although there’s plenty of plastic going on, the headphones will take a bit of punishment. They’re not particularly fragile, so you don’t have to be overly gentle with them.

The padding on the headband and on the ear cups is thick and plush. It’s made from synthetic leather, but it’s decent quality. Like any synthetic leather, it is going to need replacing at some point. When that time eventually arrives, the good news is, for the ear cups, at least, there are plenty of cheap replacements available online.

We found the Audio-Technica ATH-M50x headphones to be comfortable. The headband is really well padded, as are the ear cups. They don’t fit too tightly, unlike some we’ve tried, but they still sit securely on your head. 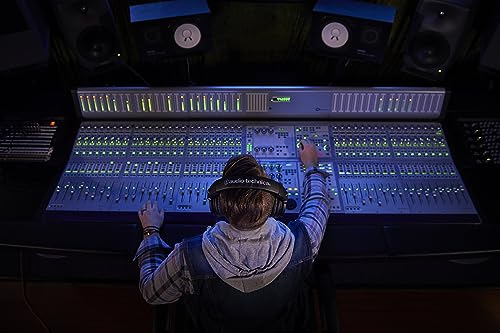 One big plus with the Audio-Technica ATH-M50x headphones is that the ear cups can rotate through 180 degrees. This makes them comfortable to hang around your neck when you’re not wearing them.

Better still, the ability to rotate the cups makes them suitable for one-eared monitoring — a great feature for DJs or for anyone working in a studio.

These aren’t wireless headphones, and there are no wireless variants with this model.

What you do get, as standard, with Audio-Technica ATH-M50x headphones are two cables. One of them is a 1.2 m straight cable, and the other is a 1.2 m coiled cable. Both of these cables are detachable and use a special Audio-Technica proprietary twist and lock mechanism.

Although the cables use a standard 3.5 mm jack, because of the proprietary twist and lock mechanism, you can’t use any other detachable cable you might have laying around. They won’t work. 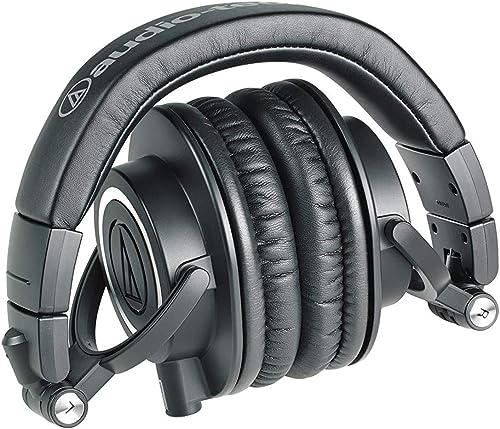 Hopefully, you won’t need another cable, you get two after all, but if you do replacement cables are readily available and inexpensive. If you get the Audio-Technica ATH-M60x or ATH-M70x, you get a three-meter straight cable supplied as standard. Very useful for the studio.

The only other comment we’d make about the cables is that since these are headphone monitors, why isn’t there at least one three-meter cable provided with the ATH-M50x? It doesn’t make sense to us. Providing two cables with the same 1.2 m length seems to indicate a preference towards general users rather than studio use.

This will be short!

The fact is that there’s aren’t any.

Possibly the biggest omission is that there’s no microphone integrated into any of the choices of cables. Furthermore, there are no cables available online that be can be used with these headphones that have an integrated mic.

This may not be an issue for some of you. If you intend to use them at home, it’s not something you’re going to miss. In fact, built-in mics can be more of a hindrance than a help when you never use them. Never the less, if you’re thinking of using these headphones on your daily commute, and you need t take calls whilst you’re on the move, these may not be for you.

Other controls missing from the Audio-Technica ATH-M50x headphones are any kind of functions to pause, play, or skip tracks you might be listening to. Again, this is hardly surprising for a pair of monitor headphones but may be inconvenient for more general-purpose use.

Sound is where it’s at for Audio-Technica, and this is where we expect these headphones to shine.

And shine they do. They sound great. But just not quite in the way, you might expect.

These headphones have been championed on forums and online as been great sounding and a real antidote to the heavy bass-driven fashion headphones like Beats. And we agree with this 100%. They’re right.

And here’s the, however… whilst all of this is true they still have a boost to the bass. It’s subtle, it’s very subtle, but it’s still there. There is a distinctive punch and added oomph that’s been infused into the bass.

The good news is that it’s not overdone. It doesn’t sound boomy, and it doesn’t overpower the rest of the frequencies and muddy the sound. This subtle tinkering is also carried through into the upper mids that also appear to have had a bit of a boost. But again, not overdone.

The Audio-Technica ATH-M50x headphones sound bright and are nicely detailed in the mids. They don’t have that over scooped out signature sound so common in modern fashion brands. Furthermore, the trebles are clear without sounding harsh.

Overall we like the sound. It’s engaging, it’s exciting, it’s great to listen to. In fact, we don’t just like it; we love it. But it’s far from neutral and far from what you’d expect from a pair of studio headphones.

And therein lies the conundrum…

Frankly, the headphones sound like they’re a bit all things, to all people. We totally get the rave revue. They do sound great. But they don’t sound great for a pair of monitor headphones. There’s too much color to the sound for that.

So the question is, why put the color there in the first place? 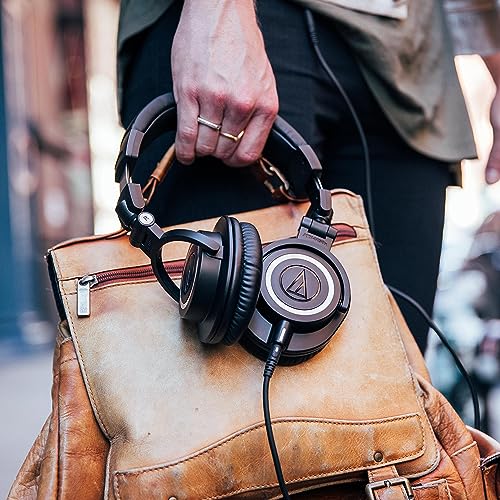 There’s no doubt that if you’re only going to buy one set of headphones and use them for general listening, and for use in a studio, or for Djing, then they have their place.

We think they also have a place for general listening and for that commute to work. In fact, we’d pick them over a lot of alternatives and certainly over modern headphones that scoop out the mids and all the detail and listening nuance that goes with it.

If we’d select them as purely a set of studio headphones is another matter.

With so many superb headphones currently available, it’s tough to make the right choice. Therefore if you’re not 100% convinced on these Audio Technica’s, check out some of our other reviews.

Of particular interest will probably be our reviews of the Best Studio Headphones for Home Recording and the Best Sony Headphones on the market.

All in all, we think that the Audio-Technica ATH-M50x headphones are a great set of headphones and offer excellent value for money.

They’re well-built and are sturdy enough to take some general day to day punishment. We found the comfortable to wear and also loved their engaging sound which never became tiring to listen to. They do lack the out and out neutrality of high-end studio headphones, but otherwise, there’s plenty to like.

We think they’re a great buy. 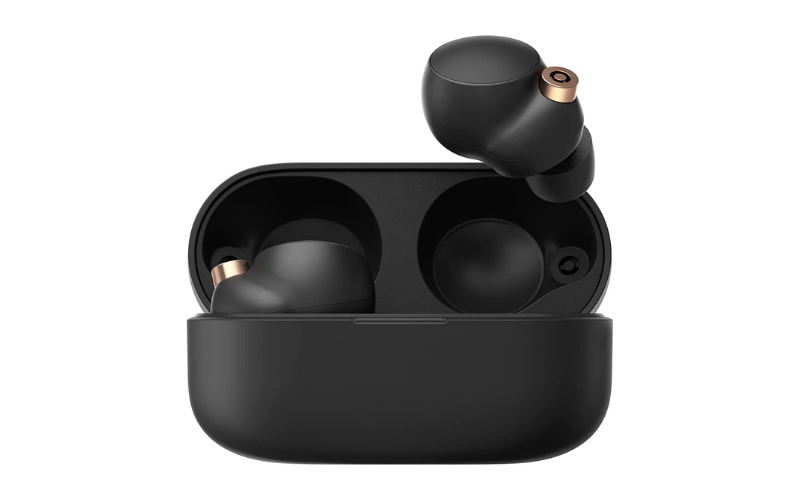 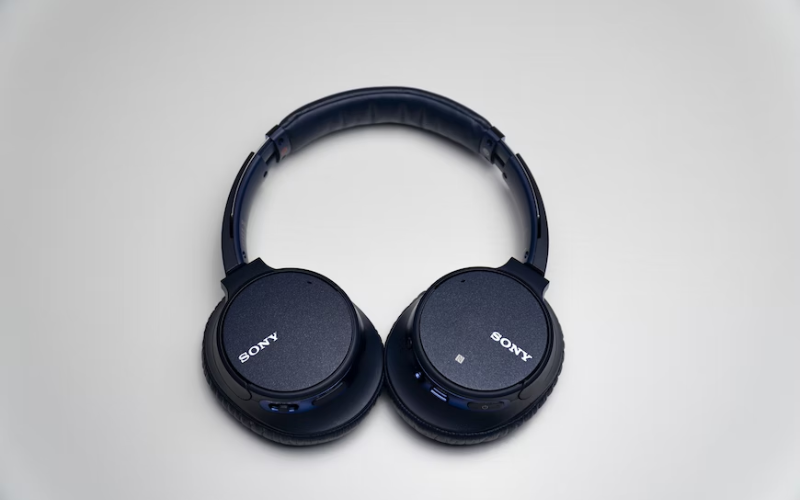 How to Pair Sony Bluetooth Headphones to Any Device? 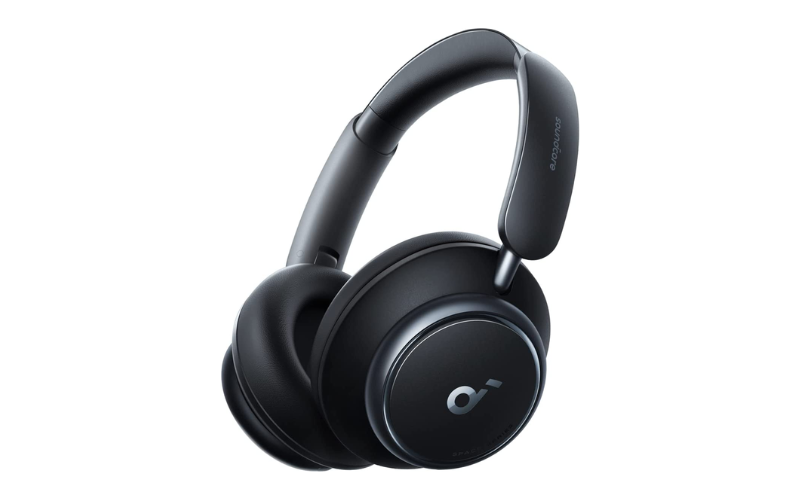