As with a million other product lines, Amazon has entered into the gaming headset market with the AmazonBasics Pro Gaming Headset. This is their second attempt to provide gamers with a cheap and cheerful alternative to the more expensive brand name products gamers traditionally go for.

Amazon’s first attempt at making a gaming headset was a disappointing experience, to put it mildly. So against our better judgment, we thought it only fair to see if they had managed to make any real improvements with their latest offering.

The AmazonBasics Pro Gaming Headset is insanely cheap, so the question is, does it provide those on a budget with a decent enough alternative to spending five or six times as much. 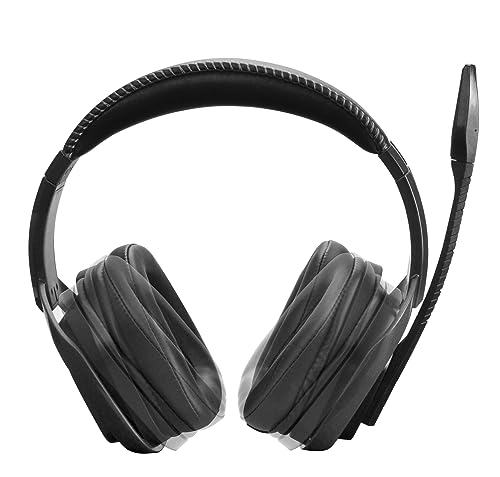 Out of the box, these headphones come in a soft carry pouch, which is a nice touch for throwing them in a backpack for a LAN party or gaming meetup. However, on closer inspection, it doesn’t look like the AmazonBasics Pro would travel very well or stand up to any kind of rough treatment.

The glossy black plastic design could certainly be worse, but the first impression is one of cheapness. Not only do they look cheap, but they feel cheap.

There were a few noticeable squeaks when being handled and in general, everything feels pretty roughly put together without much finesse. The plastic casings will also certainly be susceptible to greasy fingerprint marks if that sort of thing bothers you.

They also feel quite stiff and therefore quite susceptible to being crushed or damaged in a bag. The cable, at least, is well braided, with the potential to last longer than the headset itself.

There is a rather bulky inline control box that is unfortunately constructed from the same cheap-looking plastic as the headset.

You’ll find buttons for volume control and mute options for both the microphone and the headphones. Annoyingly, the control box falls right near the edge of my desk resulting in the accidental pressing of buttons. This, of course, won’t be the same for everyone, but it certainly interrupted our gaming experience on several occasions. 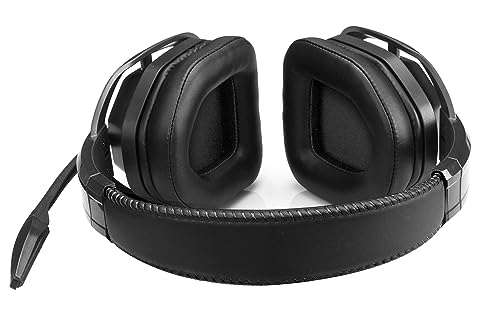 The AmazonBasics Pro Gaming Headset’s rather stiff design did not inspire us with much confidence towards their overall comfort. For the first week, the clamping force on our head was so strong that after an hour of use, a headache would start to develop.

But after that first week, the clamping force relaxed significantly enough to allow for much longer sessions of use.

The band adjustment is notched with an acceptable if slightly small range. You may have a little trouble if your head is kind of large. The ear cups swivel vertically but not horizontally. Fortunately, the cups are on the large side, so they should encompass most ear sizes.

Faux-leather covers the padding, which is made of low-density memory foam. This is actually quite comfortable after the clamping force resides. The pads are also removable for when you need to wash or replace them. The headband padding is very thin but is just enough cushioning to ease any potential discomfort.

Decent comfort for the price…

If you do decide to give them a go, we’d highly recommend manually breaking them in by stretching out the headband a little. Hopefully, this will bypass the initial week of discomfort we experienced. 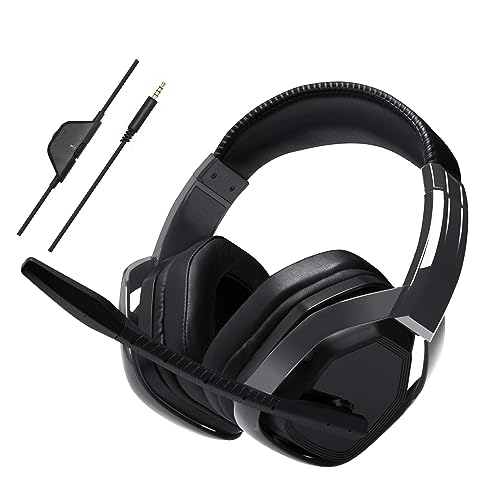 The biggest problem AmazonBasics’ previous gaming headset had was in the sound department. So how does this ‘Pro’ version sound audio-wise?

This time, instead of being utterly abysmal, the audio quality has improved to a level we’d describe as more than acceptable. They are quite mid-heavy and lack a ton of bass, but they still have a punchy sub-bass.

When compared to the highly recommended HyperX Cloud 2, the sound profile to us at least is preferable. The extra mids make everything sound a little clearer, and the flatter frequency response curve is also a plus.

The stereo separation is fine, and we didn’t encounter any glaring issues while testing it on a variety of games, notably Overwatch and Dauntless. A minor criticism would be that the lack of bass made explosions sound a little weak.

The large ear cups create a good seal to help block out unwanted background noises. Obviously, at this price, there’s no active noise cancellation tech. However, they’ll do a good job of blocking any home-based distractions whilst you play.

The worst thing that could be said about the AmazonBasics Pro sound quality is that overall they sound a bit hollow. A little more meat on the bones would be nice, but for such a cheap headset, they perform admirably well.

Now on to the AmazonBasics Pro Gaming Headset’s best feature. 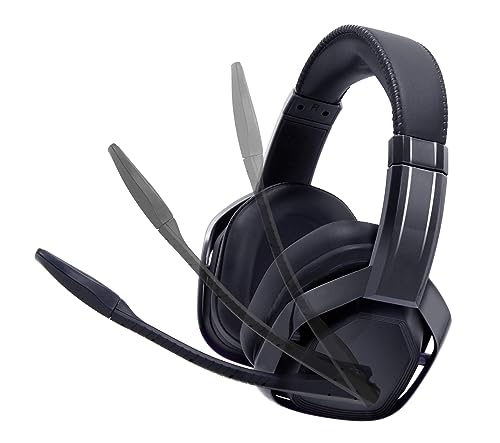 The boom microphone is attached to the left headphone, with a good rotational range of movement and a degree of flexibility in the arm. It’s one of the sturdier parts of the whole construction and stayed put in the position we wanted.

No issues were experienced either gaming or talking over Discord or Skype. On the downside, whilst using it to record, there were a few issues with noticeable static feedback. But this could probably be sorted out by recording with a program that incorporates noise reduction features.

Unless the person listening is an audiophile or sound engineer, nobody will have any real complaints about the quality of this microphone. Whether it’s a voice call, gameplay, recording, or voiceover, the microphone performs admirably well for such a low priced piece of kit.

You might also be interested in our comprehensive reviews of the HyperX Cloud Alpha, the Astro Gaming A20, our Logitech G Pro X Wireless Review, the Playstation Gold Wireless, the Beyerdynamic Custom Game, or the Logitec G432.

If you’re thinking of upgrading your microphone, then check out our review of the Best Microphones for Gaming you can buy in 2021.

In conclusion, at this price point, you could definitely buy headphones that sound slightly better. That said, the microphone wouldn’t even be in the same ballpark as the AmazonBasics Pro Gaming Headset. You could obviously buy a separate microphone that outperforms these. But then you’d have to go spend the extra cash on headphones.

Or, if sound quality is your main priority, then you’d be better off looking at the Turtle Beach Recon 70 or possibly the Razor Kraken X. Both of which have a significantly preferable sound profile at not much more cost. 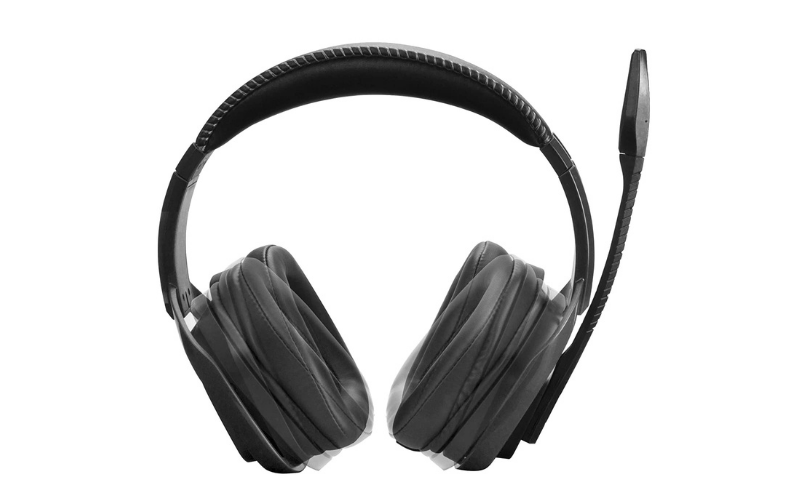 But, if your budget for a gaming headset is virtually non-existent, you really should consider these as an option. The build quality is dubious, but the sound is acceptable and once broken in. Plus, they are comfortable enough for reasonably long sessions. And then there’s the best part. A microphone that way outperforms its similarly priced rivals.

You have to give Amazon credit where credit is due. The AmazonBasics Pro Gaming Headset is a significant improvement on their first foray into the gaming world and worthy of a look for those unwilling to spend a fortune. 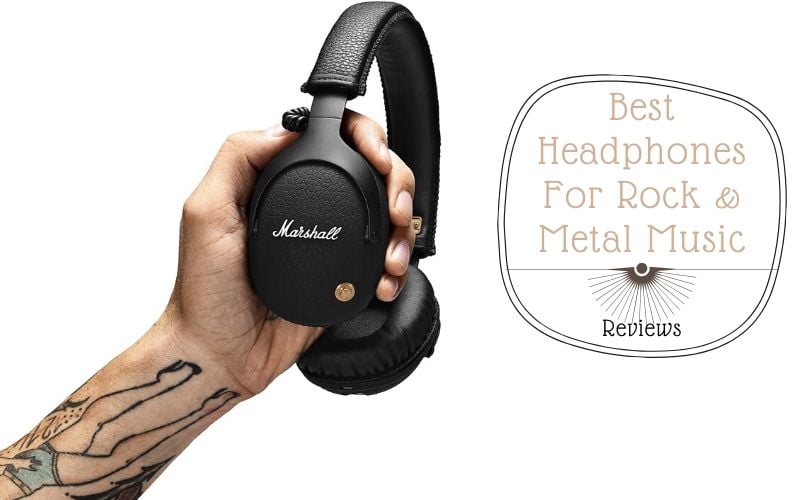 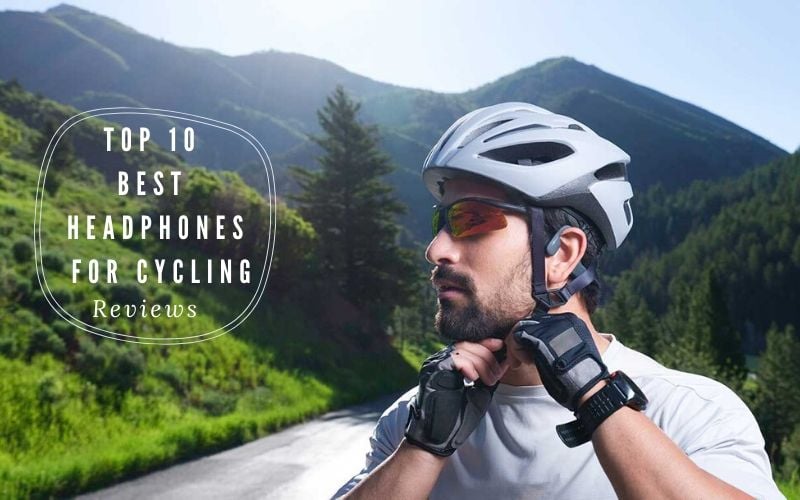 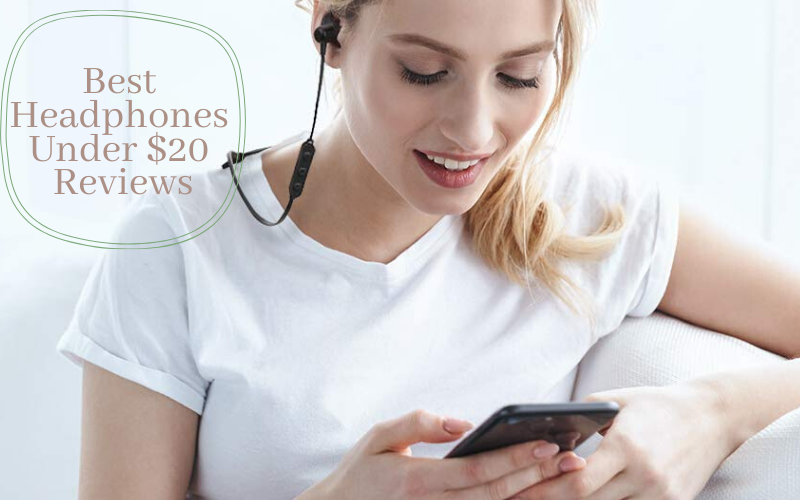