Portable pianos are not a new idea. They were first seen in Germany in the late 1800s. At the time, they were built for other reasons than what we see today.

Playing the piano has long been a desirable occupation. But for some, it became an improbable dream. Space is one thing, living accommodation another. The Alesis Melody 32 would have been excitedly received in many households even as recently as the 1970s.

One of the problems was that you needed a house with enough room. Some didn’t have that luxury. The increase in high rise living accommodation and flat/apartment blocks also made it very difficult. How could you get it up ten floors?

People turned to other instruments…

But when the portable electric piano made its appearance, things changed. Now you could go to the shop, buy one and walk out with it. Set it up in your home and put it in the cupboard after use. Even take it out with you if it was battery-driven.

The portable keyboard became available to all ages, from the very young to the not so young. It was a fun instrument or someone’s first musical steps. And today, there are literally thousands of variations. We are going to look at one such offering in our Alesis Melody 32 Review. But before we do, who is Alesis?

Alesis was founded in Rhode Island in the US in 1984. They are part of the InMusic Brands organization. The manufacture of portable pianos and keyboards is just one of their product lines.

They are active in manufacturing and marketing Audio mixers, Processors, and Drum machines. As well as a variety of other music and computer-related music hardware. Their products are designed in America and manufactured in China.

This is an instrument designed for kids and starters; there is no doubt about that. To that end, it is well-designed and includes just about everything to entice a beginner.

Alesis has clearly thought about what it would take to get children playing the piano. They have then included just about all of what they came up with and a few more ideas besides. It is an extremely portable keyboard, which means that you can take it and play it anywhere. Even on those long car trips (Sorry, parents).

Don’t be fooled by its modest size. Underneath the bonnet, plenty is going on. Three hundred instruments for a start plus rhythms and a record and playback feature. That will be enough to enthuse the young mind.

There are also some great offers for lessons and teaching that are free with this package. We will look closer at that a bit later.

It all adds up to a well put together deal. But, is it expensive? You will have to wait and see.

So, let’s take a closer look at the Melody 32 from Alesis…

It is made, as you might expect, from plastic. This includes the body chassis and the keys. It does seem to have a reasonable build quality. But as it only weighs just over 3.5 pounds, it might not be the most sturdy. It measures 6.5 by 22 by 2.5 inches, so it is small enough to be carried around or even placed in a rucksack. This is where the lightweight build is a positive thing.

It has 32 piano-style keys that are slightly smaller than full-size. This is a natural requirement of the compact size of the keyboard. Perfectly ok for a young player or a child, though an adult with large hands might struggle a little.

At each end of the keyboard, there are speakers that are built-in. These make it a self-sufficient instrument in that it needs no external amplifier for you to hear it.

We wouldn’t say they are the best quality you will hear; neither are they the loudest. But they are more than adequate for the task at hand and provide a reasonable sound.

To power it up, you can use either the USB cable that has been included or use batteries. It will take four AA batteries, though this is probably best used sparingly. Keyboards are notorious for eating up battery life, and you don’t want to be replacing them that often.

Battery use is an important design feature for a keyboard like this. So with regard to its portability having the option is only a positive.

One of the best features that have been included with this keyboard is the ability to record yourself. This is a big selling point in our view.

A lot of fun for a child to be able to do that, of course, but a great asset for when you are practicing. You can record just for playback, or so you can play along. For private practice, there is a ⅛ inch headphone socket. When you plug in your headphones, it will mute the speakers. Great for those car journeys!

As with all products, you have to put into perspective a few things. In our opinion, it is well-made and does ‘what it says on the tin.’ We would recommend you are careful when carrying it around, but it has a decent build quality. For those that are familiar with smaller electronic keyboards, you will be familiar with the sound platform. It is not going to exactly replicate the instruments as described. You have to pay a lot of money to get that.

There will be some decent sounds and some rather poor ones. That applies to all keyboards, even some of the mid-range products. The Alesis Melody 32 is no different. It has, though, 300 built-in sounds and includes just about everything you might want to experiment with. As we say, most are average, and some not so good but the pianos are really quite nice.
Nice pianos and organ…
The Acoustic and Electric piano sounds that have been included, as well as the organ, all perfectly acceptable. There are others, of course, and things like strings bear a resemblance to what they are supposed to be.

The point is, though, that there are 300 options, and that will encourage the starter. The more time they spend at a keyboard in the early days, the better, in our opinion. Even if they are just playing ‘Three Blind Mice’ to test out various sounds.

The controls are neatly laid out, but younger children might need some help until they get used to them. They are arranged on top inside the location of the speakers, which take up the outer limits of the keyboard. Centrally there is a screen that gives information regarding what modes the keyboard is using.

They are grouped into sections relating to their operation. The instrument section is together, as is the selection of rhythms and other operational controls. They are all push-button, as is the power on and off.

The drum and rhythm controls are all situated to the right. These feature picture descriptions as to their functions. Other useful controls feature a volume up and down and a sustain level.

Nicely laid out and easy to recognize and use, there aren’t any surprises once you know the way around it. 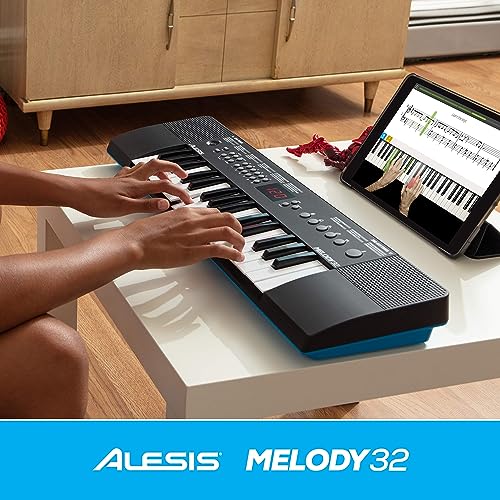 The keys are not full-size, as we have said, so adults with larger hands might struggle. But kids, younger players, and those with smaller hands will be fine.

The keys aren’t weighted, which some may see as a negative. But it is important to remember what level of instrument we are discussing here. Weighted keys do make a keyboard feel more like the keys on an acoustic piano. But they will be significantly more expensive.

The object of this keyboard is to get people playing. The feel of a real piano, if that is where they progress to – not all do, of course – can come a bit later.

The playing action is fine and ideally suited for a new player.

What else is inside?

Some people like to be able to play along with well-known tunes. Built-in to Melody 32 are forty demonstration songs. There is also an accompaniment mode.

Being able to feel that you are beginning to learn is important. Alesis has that covered by offering some lesson plans.

For those with Apple phones or tablets, you get a three-month subscription to Skoove. This provides interactive piano lessons for those with iPhone or iPad. You will also get two months of lessons conducted by video from Taking Lessons.

As an extra, you can download Melodics lessons to your tablet or your desktop computer. These are well-liked lesson plans that build your confidence with the keyboard as well as your playing skills. Melodics lessons use a variety of modern genres, and you get instant feedback on your performance.

All these are available as part of this package with the Alesis Melody 32.

The first thing to clear up is whether this is an instrument or a toy? We would say it is about 80 to 20% in favor of an instrument. Yes, there are some ‘toy-like’ aspects to it. But then this is for children essentially. It needs that.

This is an excellent introduction for a child to the wonders of music. And it is also a great opportunity for the more senior citizens who never got the opportunity before to have a go. 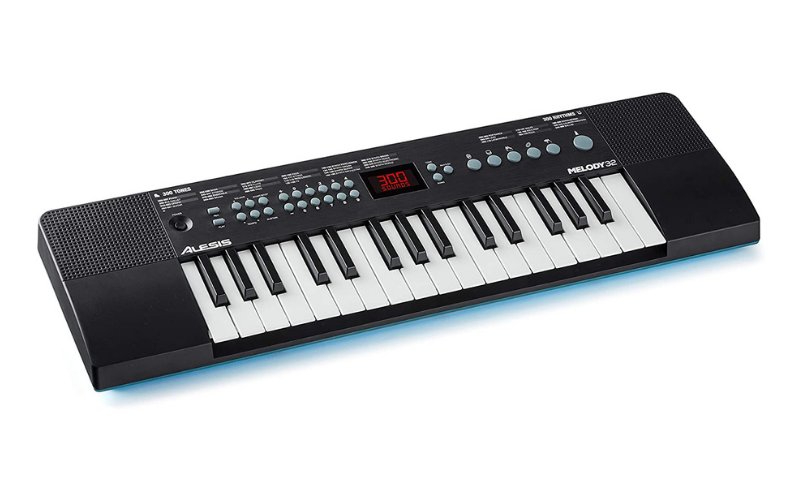 As it has plenty of sounds and features built-in, including a recorder, we posed the question earlier. Is it expensive? Not at all. In fact, for what it is, the price is quite staggering.

Are you looking for a starter instrument for a younger child to get them going? You will find it hard to find a better value than the Alesis Melody 32. 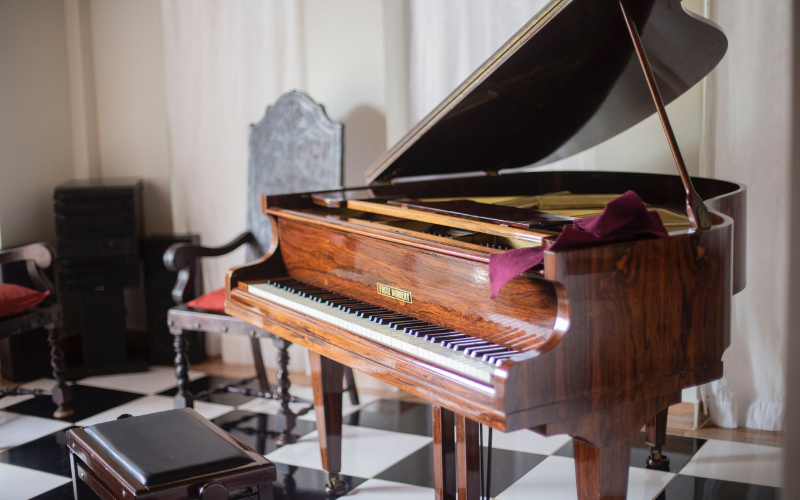 Where To Donate A Piano? 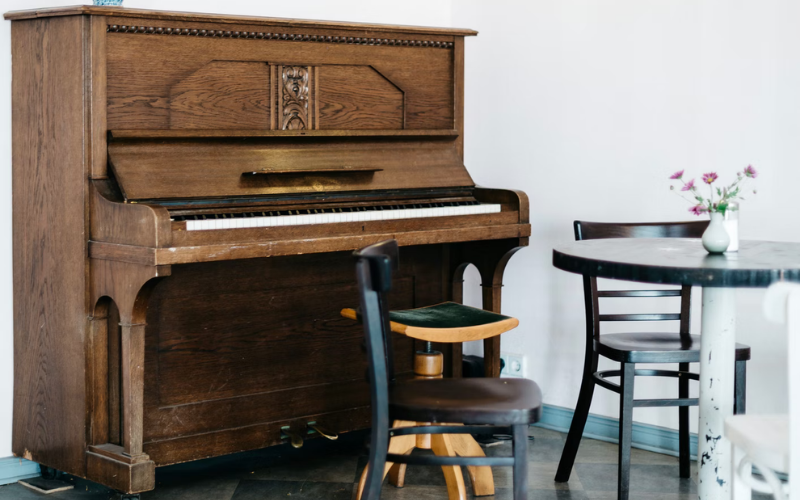 The 4 Different Types of Upright Pianos 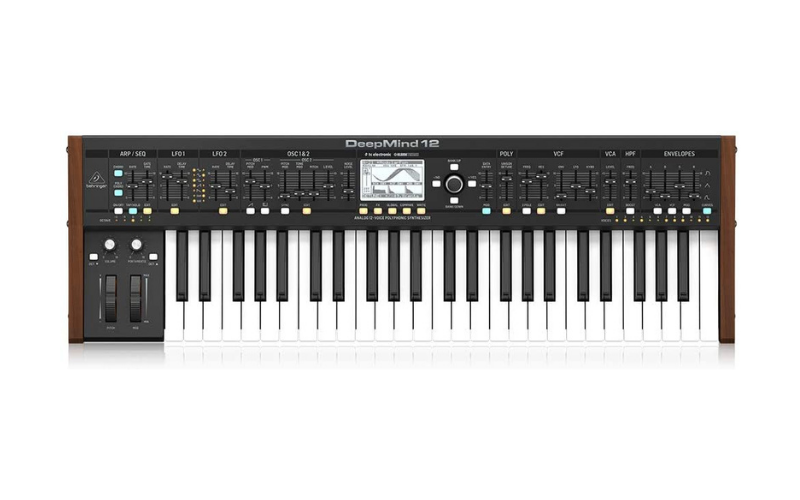