AKG microphones are known to be a leading force in the world of microphone design and manufacture. They are also widely accepted as the driving force behind many technical enhancements that have transpired. But, before we get to our AKG Perception 220 Review…

Let’s look at a little history…

Founded in Vienna in 1947, they were originally involved in supplying technical equipment to cinemas for film projectors and loudspeakers. They achieved international recognition in 1953 by developing the first cardioid dynamic microphone. From then on, AKG’s products have been seen in the best recording studios around the world. They continued to grow and in 1985, established a US subsidiary based in California.

In 1994 they were bought by Harman Industries. This was part of what seemed to be an attempt by Harman to buy any music related business that moved. After nearly 70 years of being based in Austria, the company closed its Vienna HQ. Most of the AKG product line is now manufactured in Harman’s overseas factories.

Harman has four research centers in China, along with two Chinese manufacturing sites. Harman are themselves owned by Samsung.

However, many years of manufacturing excellence in microphones has put AKG in a position of being a market leader for quality. So, let’s take a look at one of their microphones with this AKG Perception 220 Review… 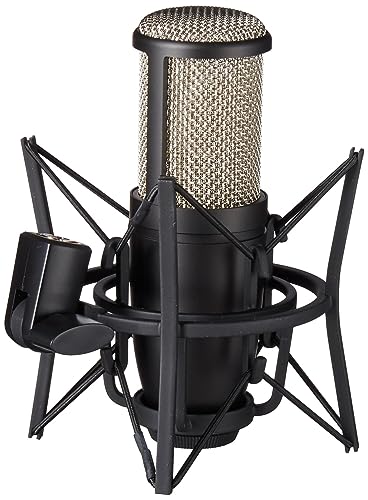 AKG does not only produce microphones at the very top of the range, but they also produce what you might refer to as affordable microphones. They have a strong position in the condenser microphone range, and the P220 is one of these products. The AKG Perception 220 Professional Studio Microphone has been designed and built to allow those on a lower budget to experience AKG quality.

It is a large-diaphragm microphone. ‘Large’ means that the membrane or diaphragm is more than one inch in its diameter. Less than half an inch is referred to as a small diaphragm. This description only applies to condenser microphones. 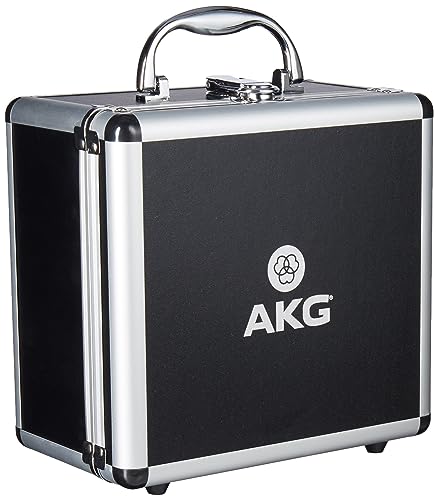 These microphones are better suite to vocals and the spoken word. They are also used to record individual instruments. Condenser microphones can be a little over-sensitive, and so a pop filter is going to be needed if recording vocals. It is not a ‘one-trick pony’ though and can be used in a variety of situations, as we shall see.

AKG first brought the Perception 200 series to the market in 2005. Since then, they have proven a big success. This microphone gives you AKG performance and quality of sound at a very cost-effective price. As a wired condenser microphone, they must be considered one of the best in their price range, and even beyond.

The P220 has a typically rugged and strong feel to it common to most AKG microphones and weighs 1.25 pounds. A tough all-metal die-cast chassis stores the condenser. Tough enough to withstand use on a daily business with no problems. Finished in a matte black, it has a very clean, understated, and minimalistic look. 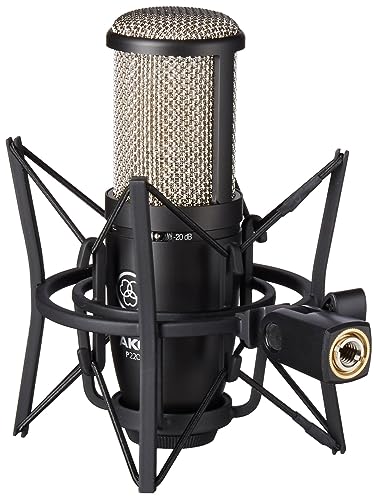 The only variant in the color design is the champagne coloring given to the grille. As we said previously, this microphone is not a ‘one-trick pony.’ Because of its quality of build, it is not only suitable for studio work but also for live stage work. And it’s tough enough to take a few knocks.

However, it’s not a looker…

A tough but laid back design is about all you get visually with this microphone apart from the AKG logo. It’s designed to perform not to look great.

It comes with its spider shock mount. Made in China, the construction of the AKG Perception 220 is excellent, and it feels like the real deal in your hands.

As you might expect from an AKG design, there are some good features built-in. It has a good frequency response of 20Hz to 20kHz. Let us pause briefly and consider what that means.

Are you going to choose a microphone to record vocals only?

If so, then you might be looking at a frequency response of somewhere between 80Hz to 15kHz. That would be a decent response for a microphone for studio vocals: not the best but more than adequate. The AKG Perception 220 is that and more.

However, if you wanted to extend the range to accommodate recording drums, then you might need to come lower. Perhaps down to approximately 50Hz. For a bass drum, of course, you are going to need a bottom end even lower. Possibly down to 30 or even 20Hz if you want a deep resonance. From this, we can see that the AKG Perception 220 fits the bill. 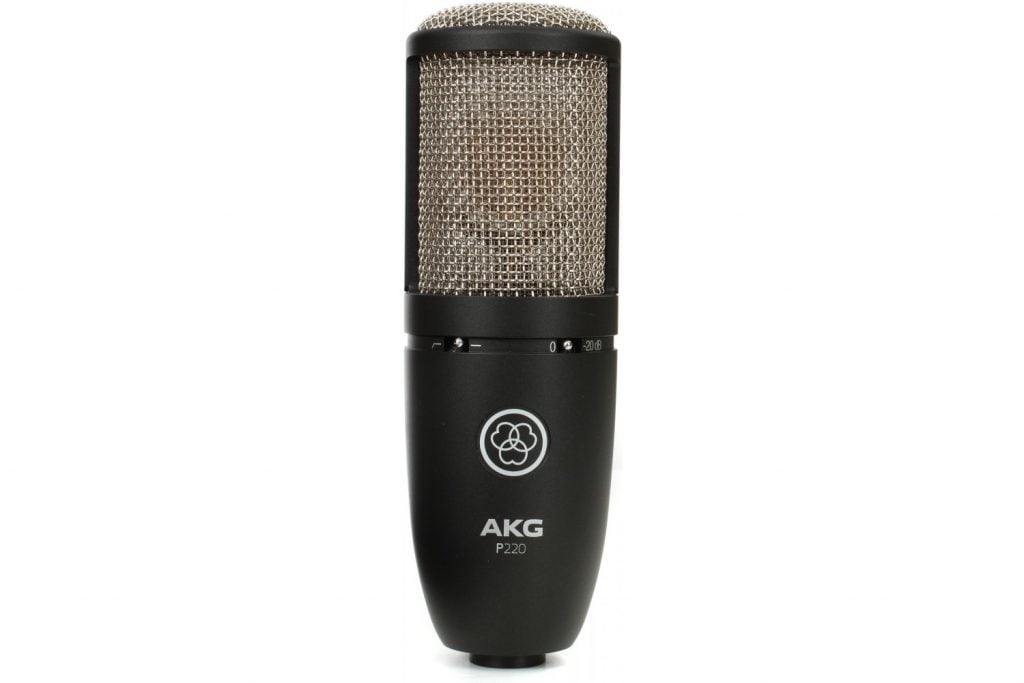 No sweat on high volume levels…

The design will accommodate a high SPL (Sound Pressure Level) of 155dB with its switchable -20dB attenuation pad. Any rumble or external unwanted noise is eliminated by a bass-cut filter. The 3-pin XLR connector is gold-plated to ensure a quality connection that will last. As we previously mentioned, it has a spider design shock mount and also has a tough aluminum padded metal case.

Not really. The next AKG mic up in the range of the P420 has a dual-diaphragm. That is one of the very few differences to the 220. That gives three different polar patterns. The P220, being a single diaphragm, only has one, cardioid. But, let’s be honest, 90+% of what you are likely to use this microphone for, such as vocals, acoustic instruments, brass, woodwind, overheads, etc., will use the cardioid polar pattern anyway. So no great loss there.

The P420 is a much more expensive microphone, so maybe that is an unfair comparison, but if you want to try more experimental microphone techniques, it is well worth investing in.

As with all condensers, this microphone does need 48v Phantom power

As we have already hinted, this is a microphone with a multiplicity of uses. We think it is probably made essentially for studio use, but its scope is wider than that. In the studio, it is obviously great for vocals, brass instruments, and even acoustic guitar. A range of other instruments all fall within its range to produce great sound reproduction.

But this is a condenser microphone, and in most cases, they will produce a better sound than a dynamic mic. They are clearer and have a fuller sound and are therefore good for the live performance.

Being cardioid, the microphone picks up its sound source, which comes from the front. It is limited to external sound from the sides and doesn’t hear the sound at all from behind it. Another reason that it works well for live performances. Stage microphones also need to be tough, and it is certainly that.

However, it isn’t the sort of design that would look particularly good hand-held if we are honest. But on a stand, it looks the part. So live vocals no, unless the singer always leaves the microphone on its stand. But a pair of them are a superb option for reasonably priced overhead microphones.

Its performance is enhanced by some of its features. The bass-cut filter and -20dB pad and an SPL of up to 155Db make it great for excessively loud sound sources. And it delivers a vocal reproduction that is crisp but warm.

It is what we might call a ‘workhorse’ of a microphone. Tough and reliable with a lot built in to make the results and performance outstanding.

If you’ve enjoyed this article, then please check out our in-depth reviews of the Best Vocal Mics, the Best Microphones Recording Electric Guitar, the Best Dynamic Microphones, and the Best USB Microphones currently available.

You may also be interested in our reviews of the Best Microphone Preamps currently available on the market. 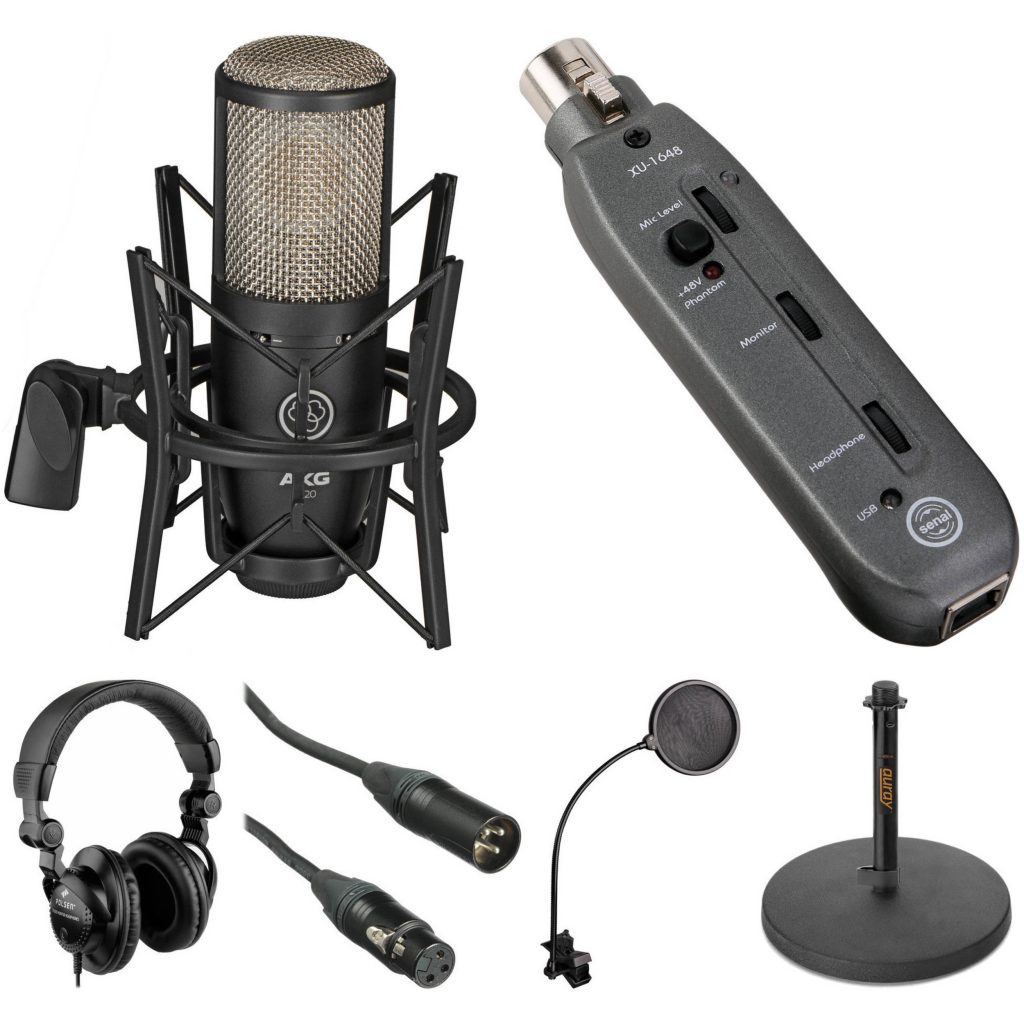 There is no doubt that this is a quality microphone, produced by one of the great manufacturers. For years AKG has been manufacturing quality, and this is just another example. The AKG perception 220 gives you something that is quite rare today. Absolute quality at an affordable price.

It is a mic that has been designed to work in the studio, as we have said, and in that environment, it excels. But it has many potential uses, and for this reason, it is one of the best and most respected condenser microphones in its price range.

On the subject of the price, it falls into a category that makes it a stand out purchase. For AKG quality, you are getting an awful lot of mic for your money.

While conducting this AKG Perception 220 Review, we have praised the quality of the build and the performance. For the sake of balance, we should consider some things that perhaps some may feel it is lacking.

There is no XLR cable supplied with it, which some may find surprising. But many mics these days do not come with the cable, meaning you have to buy it separately. But at the price of the microphone, that’s no major hardship.

What you are getting is a great microphone at a superb price. It has multiple uses, not just vocals, and is the kind of mic that most studios should have if only for its variety. We would agree that it doesn’t scale the heights of the big-budget microphones, but it is not at a big-budget price. As a great microphone that has lots of uses and produces a great sound, you won’t find better, especially at this price point.

AKG microphones are a quality product with a great tradition. The AKG Perception 220 is a part of that tradition. 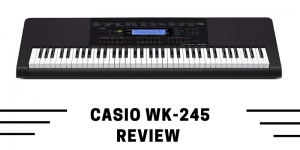